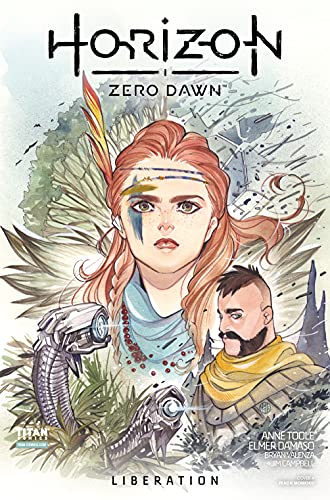 Horizon: a far-future Earth full of epic natural beauty and forgotten ruins, where awe-inspiring, animal-like machines are the dominant species and humans struggle to survive in pre-industrial tribes.

Set during the events of Horizon Zero Dawn, Erend and Aloy are on the hunt for the killer of an important member of the Oseram tribe, fending off deadly machines along the way. As the hunt progresses, Erend reveals the sweeping tale of the liberation of Meridian, and how his sister, Ersa, Captain of the Carja Vanguard, was murdered.

Horizon Zero Dawn: Liberation brings us on an adventure following Aloy and her friend Erend, on their way to find Erend’s sister’s murderer and avenge her death. While on their voyage, Erend shares the story of how Ersa became Captain of the Carja Vanguard, and how they freed Meridian.

This was a two in one story which was cool. Part of it followed Aloy and Erend on their quest, and the other part was a flashback of Ersa. These two stories do an excellent job adding to the world of Horizon Zero Dawn. I loved the exploration between Aloy and Erend’s friendship. They already had a unique bond this far into the game, but I felt this story added more to it. It created more trust between them that makes their friendship more loving and heartwarming.

The story revolving around Ersa was really interesting. It gave more insight on who she was. The story describes her as strong, brave and independent, making this a character that would have been awesome to have explored in the game. Narrated by Erend, Erend shows how he looked up to Ersa and why avenging her was so important. Annel Toole writes a great plot that I feel even people who aren’t too familiar with Horizon Zero Dawn can enjoy too. The pacing of the story was written well and provided a good read mixed with a lot of action.

The art in this series was beautiful. I felt it encompasses many of the traits the video game had. The gestures and movements throughout the panels felt as if I was playing the game as everything felt true and natural to the characters. Elmer Damaso’s style may be a bit on the cartoony and simple side; however he exceeds at showing textures and shapes throughout the environment, architecture, and machines, which felt very reminiscent of the video game.

The colors by Valenza and Stelladia are what really tie everything together. I love the warm color palette that felt just like the lighting in the video game itself. It’s a great combination  along with Damaso’s linework.

This was a fun, adventure packed read for people who enjoyed Horizon Zero Dawn and want more to the story. It provided more insight on side characters that added more interesting aspects to this world.