House of X #1: And There Were Giants In The Land In Those Days 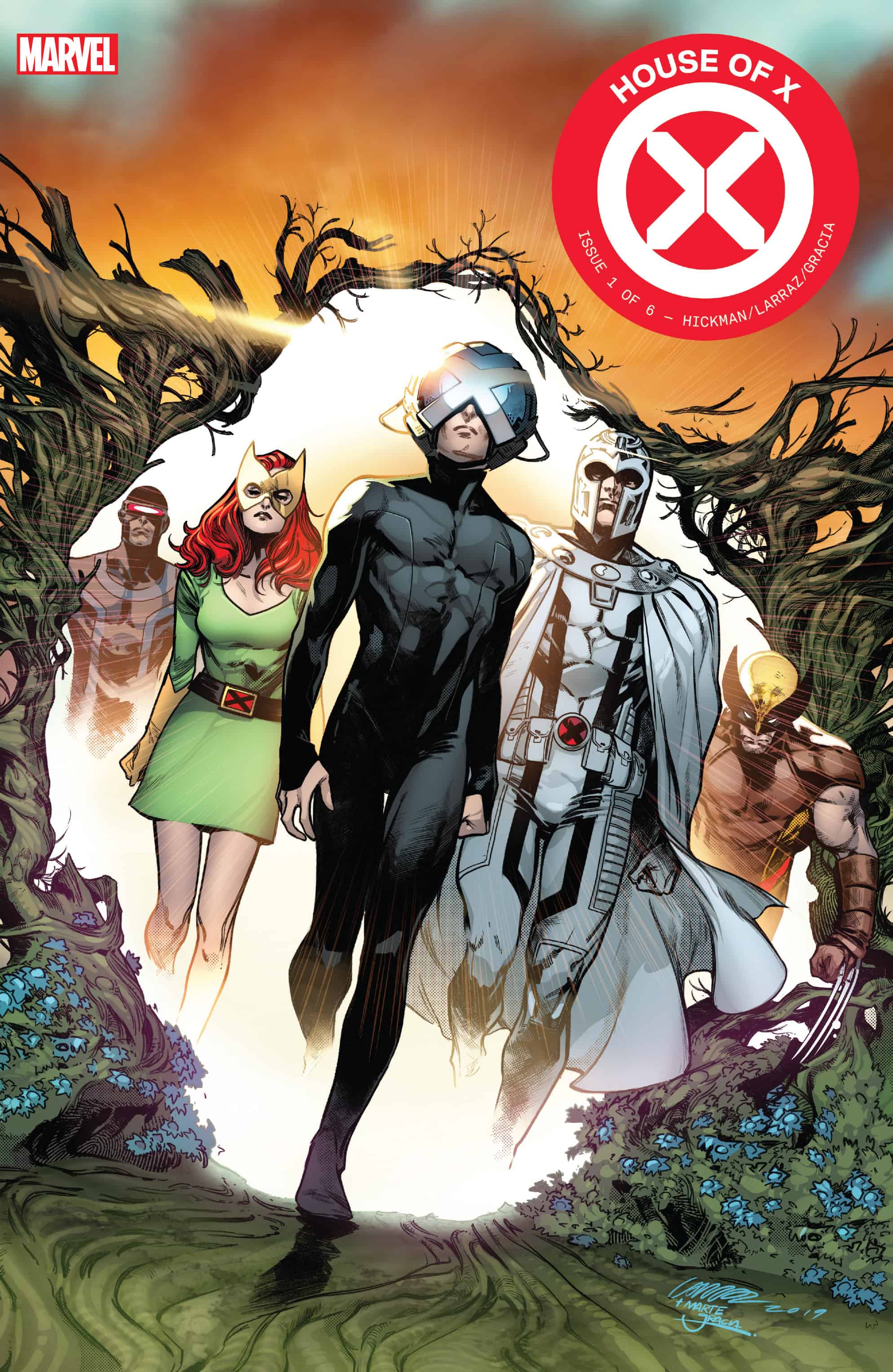 Here it is, at last. The introduction to House of X.

Jonathan Hickman has produced something rather magnificent, as many suspected that he would. House of X #1 is setting up a many-layered, deeply complex narrative, one which will probably prove to be deeply satisfying to intelligent readers and equally frustrating for the lazy. You’ve got to work, a little, to squeeze all of the juice from a good book — and this is a very juicy installment indeed. 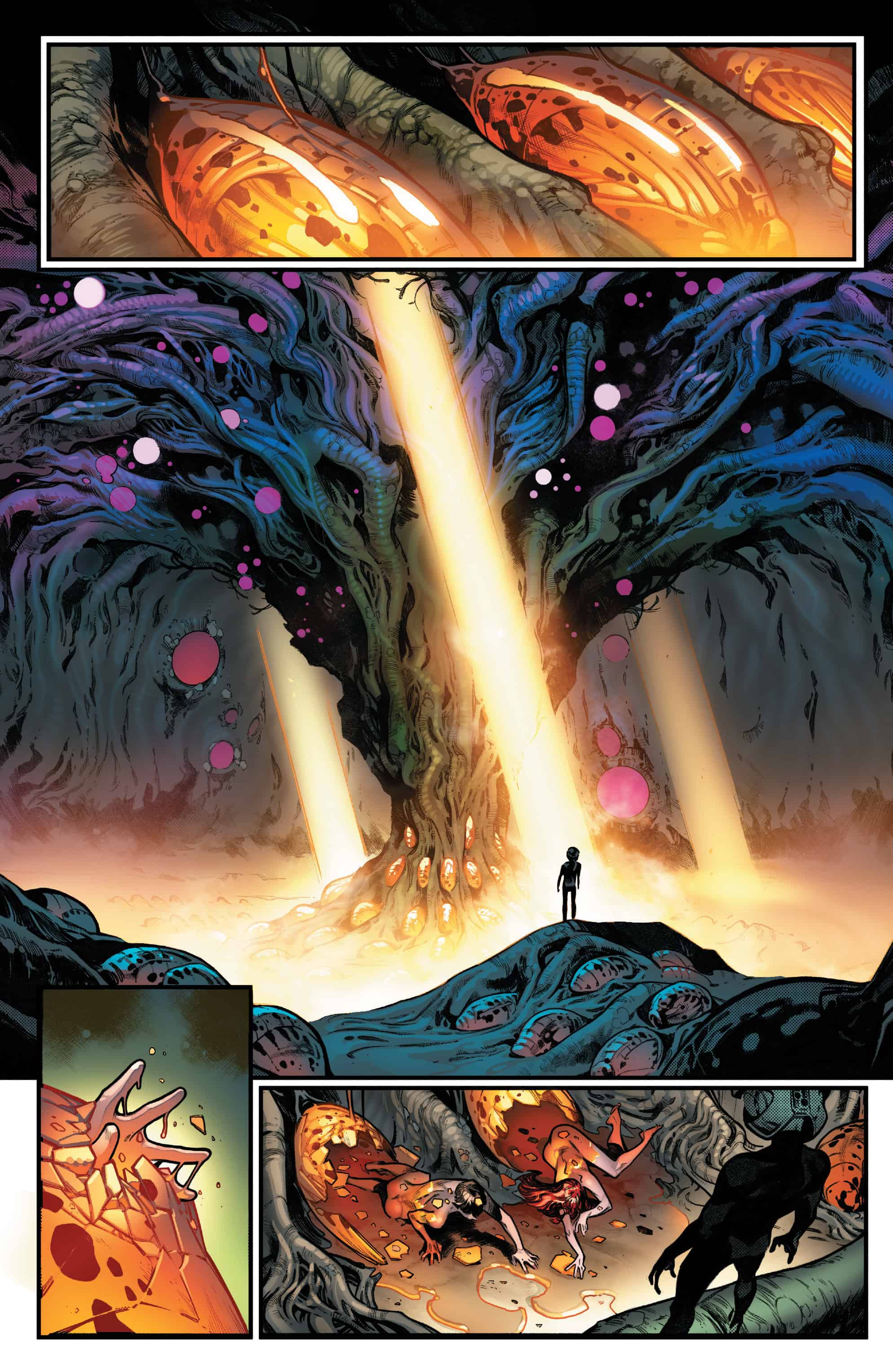 Let’s start with the setup. Xavier (operating as X) has done something to his students. They’ve either been cloned (Karoka has produced copies of people before, remember Nightcrawler’s solo adventure in Excalibur) or else ‘reborn’ in the matrix of the plant in order to be made more pliable. There’s a creepy Garden of Eden shot with Cyclops and Jean, being born, naked, at the feet of their maker/mentor. In any case, those opening pages set up a deeply ominous tone which the rest of the story keeps perfect rhythm with. 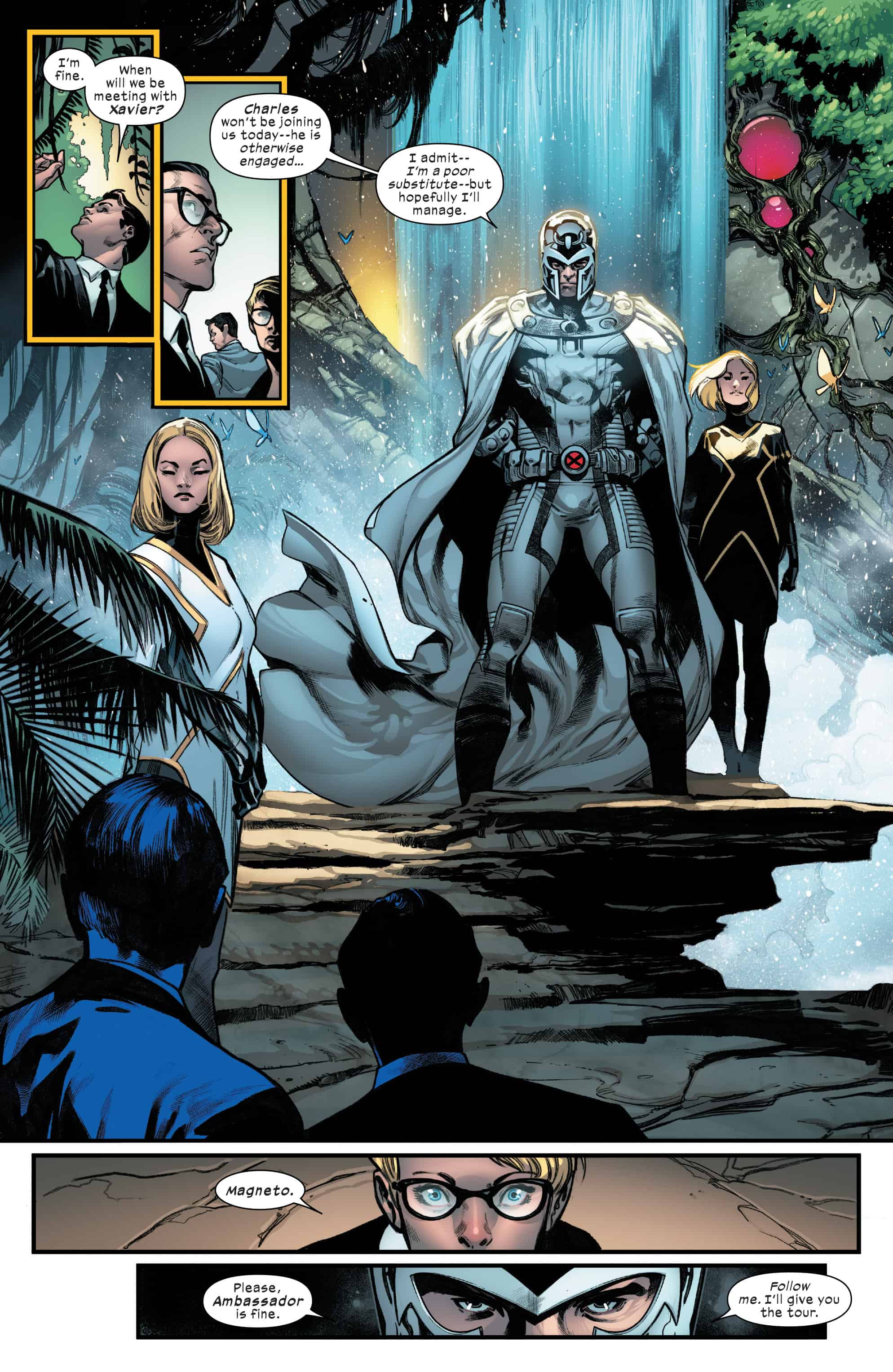 Xavier’s alliance with Karoka has born much fruit. There are three fruits which provide medicines for humanity (which Xavier is trading, in a rather draconian fashion, for international recognition of his new country) and the benefits for mutants take the form of access to ‘habitats’ which lead to what appears to be an interdimensional linking-space (shades of C.S. Lewis’ Wood Between Worlds, here) that connects them all to Karoka itself, the mutant Homeworld where humans are not welcome. 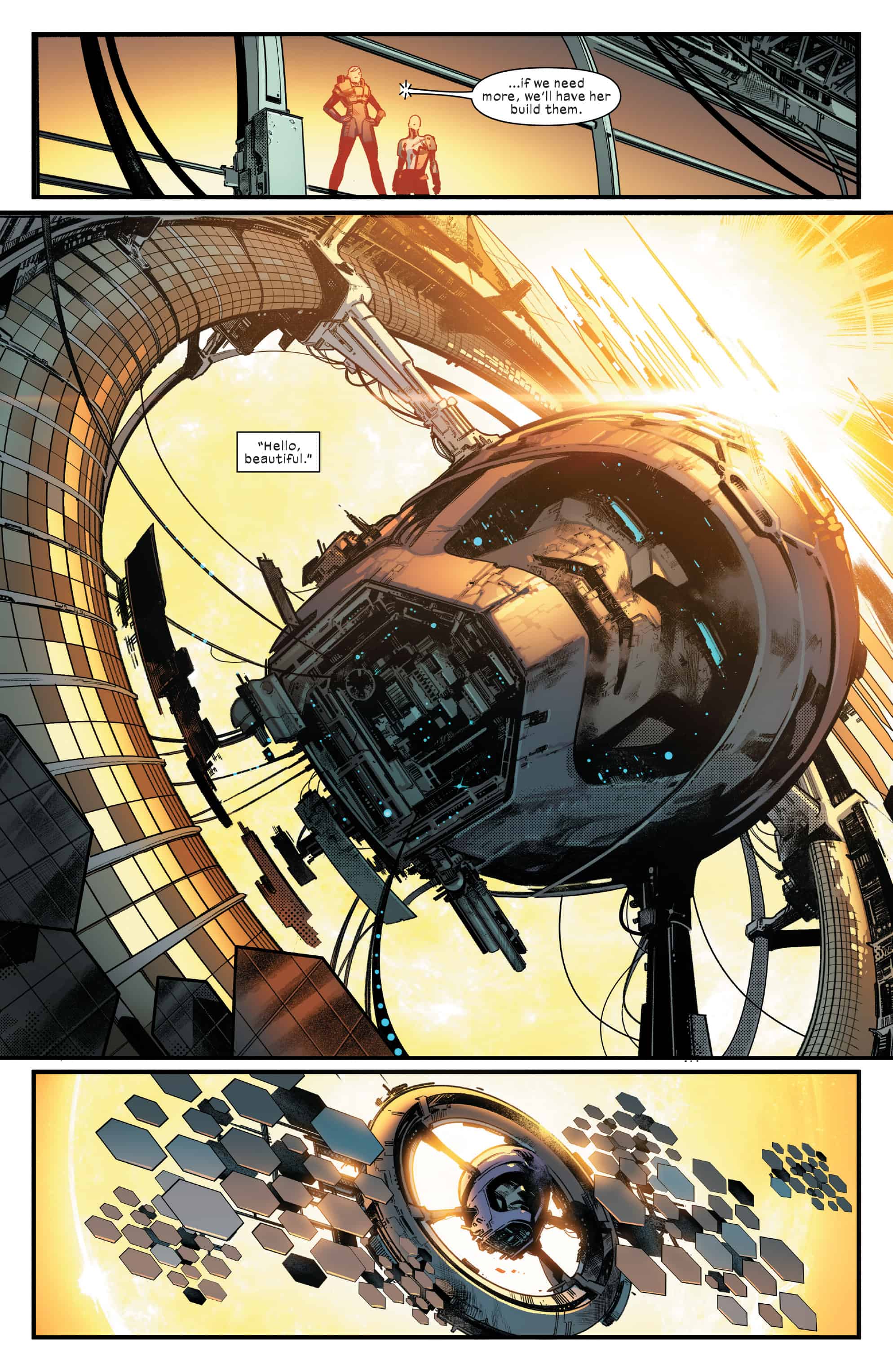 If that last bit sends disquieting, if the idea of mutants going against the original dream and segregating themselves apart from and, it turns out, above the rest of humanity sends a theremin whine up the length of your spine, I believe that is intentional. Xavier is basically holding a gun against the head of humanity (whether he is doing this of his own volition is up in the air — though if mind control is afoot, well, it would explain why he won’t take that helmet off) and that’s not going to end well. Indeed, an affiliation of organizations (including S.H.I.E.L.D, Stark Industries, and HYDRA) have banded together to combat the threat presented by the new Mutant Nation. 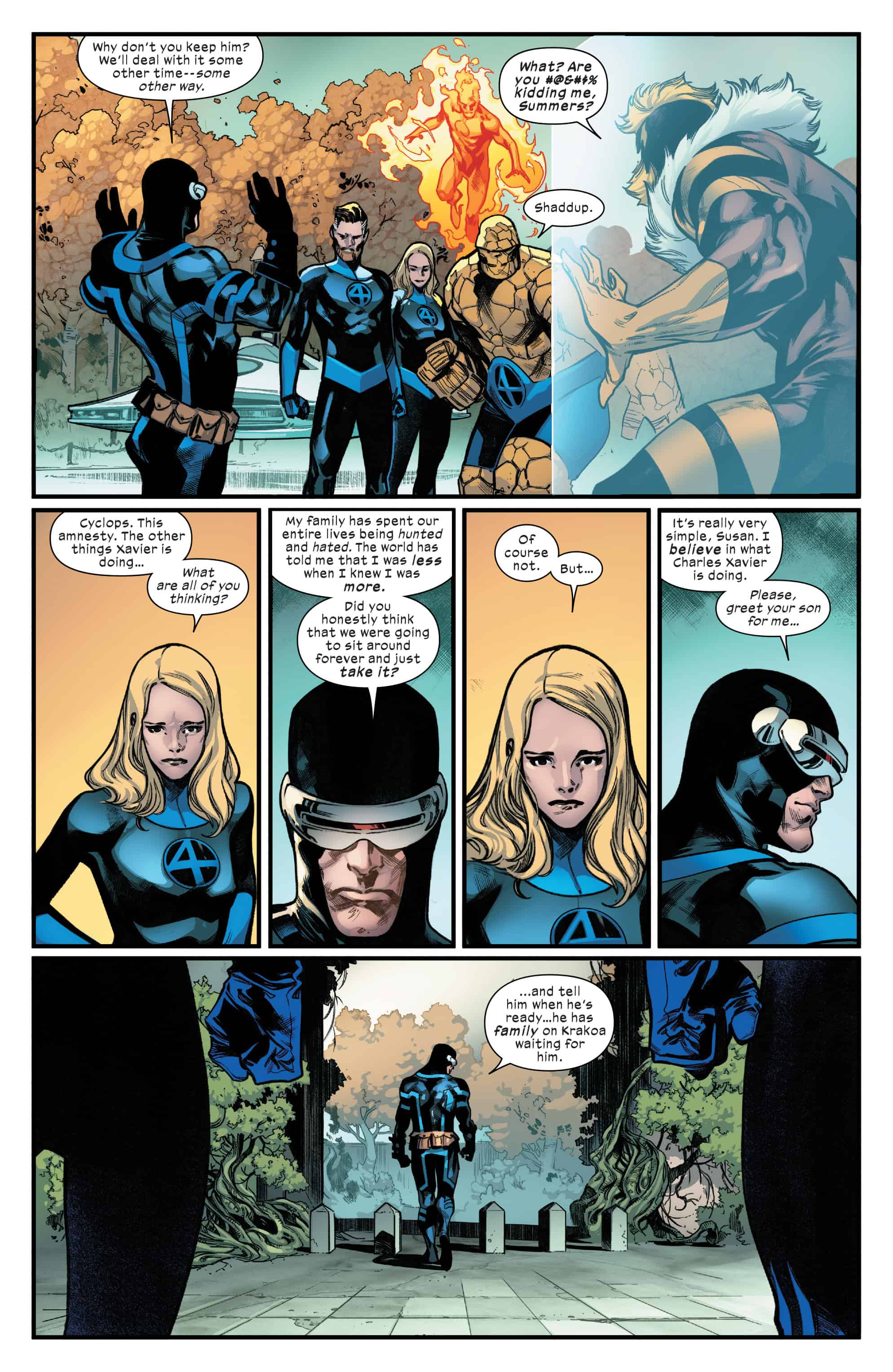 All of this only serves to scratch the surface of this book. There’s also some rather remarkable spot-on characterisation for Magneto, a suuuuuper creepy scene with Cyclops confronting the Fantastic Four (wearing a permanent, shit-eating grin), and there are graphs. So many graphs. It is Hickman, after all.

One of those graphs finally delineates the requirements for Omega mutants (Magneto and Storm are Omega. Forge is not. Jean is an Omega Telepath, but she’s only highly skilled with her TK) and that little tidbit is worth the cover price alone.

Now, in this art, words and script are only half the battle. Pepe Larraz is up to the task. Without his art, this would be a lesser work. This man captures expressions so well that he might be a photographer. His work on Magneto was especially wonderful, and I’m not just talking about the scene in which he dismantles a gun. Without his work, Cyclops’ creepy smarminess would hit with less impact. The entire atmosphere of the story comes down to his work.

As I implied in my first paragraph, the tone of this story probably won’t appeal to everyone. It’s as formally complex as a villanelle. Reading it, digesting it, will require time and effort for a lot of people. That isn’t a flaw, when the work is this good.

I am absolutely hooked.

This is the beginning of a multifoliate, gorgeously complex story, one which looks like it will change the franchise for many years to come. The art is wonderful enough to live up to that burden. Pick this issue up.

House of X #1: And There Were Giants In The Land In Those Days