The new Quiet Council forms the laws of the Nation and hold a trial for Sabertooth — Karakoa's first criminal. 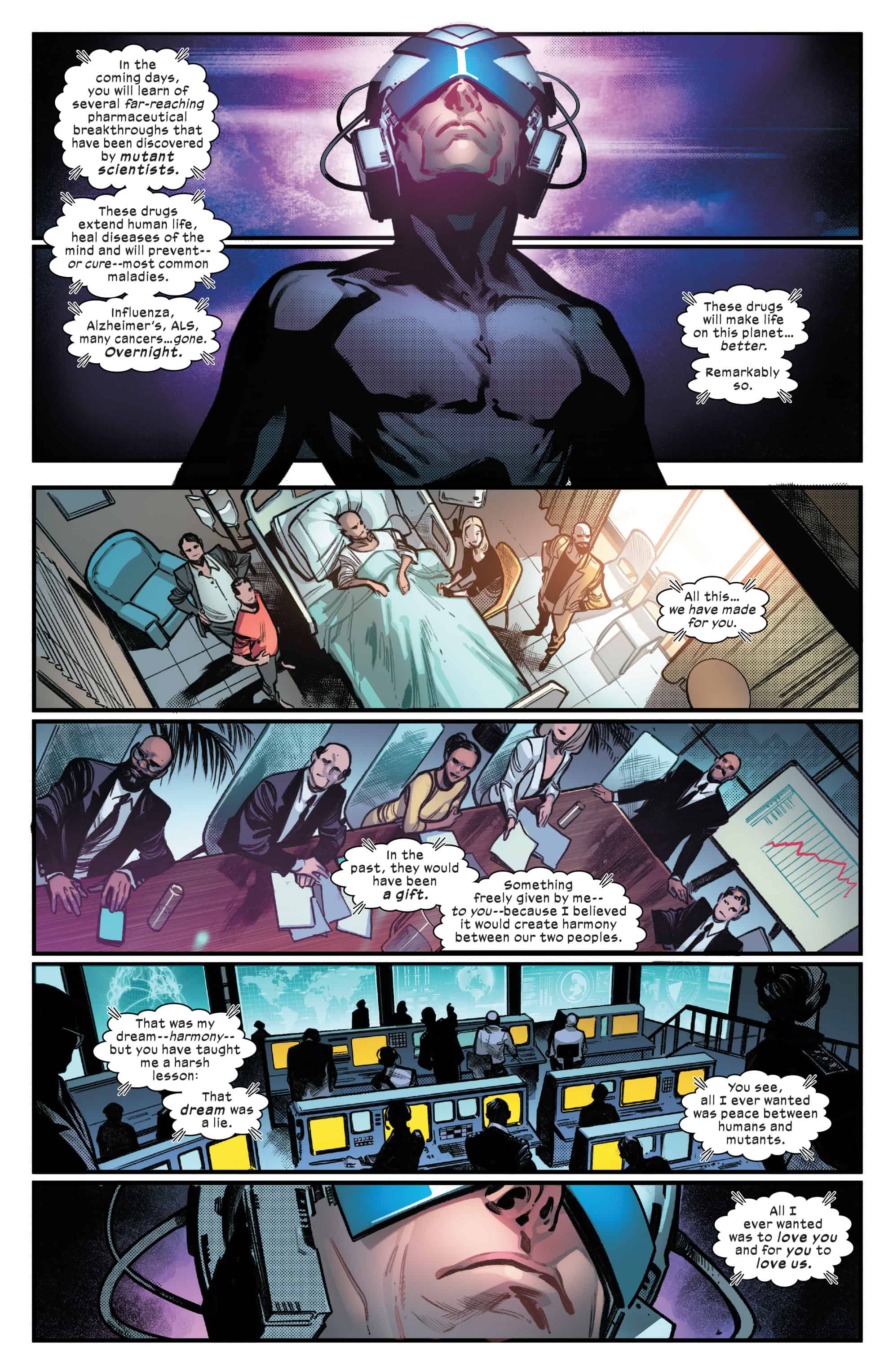 This issue was a celebratory (partial) conclusion for the first half of the intertwined series. It reaffirmed the mission of the series — and the X-Men as an institution — while at the same time laying the groundwork for the series to come. Hickman is known for pulling a bait and switch, for trailing out a morally ambiguous narrative before sliding the final frames into place to retroactively reveal something which has, in truth, been there from the very beginning and this is no exception. The narrative distance, the creepy emotional disconnect of the first few issues (which successfully separated us from these characters and make them appear to us as alien and new) is totally gone. We know where we stand with the X-Men again — and the soil of Karakoa is strong and firm. 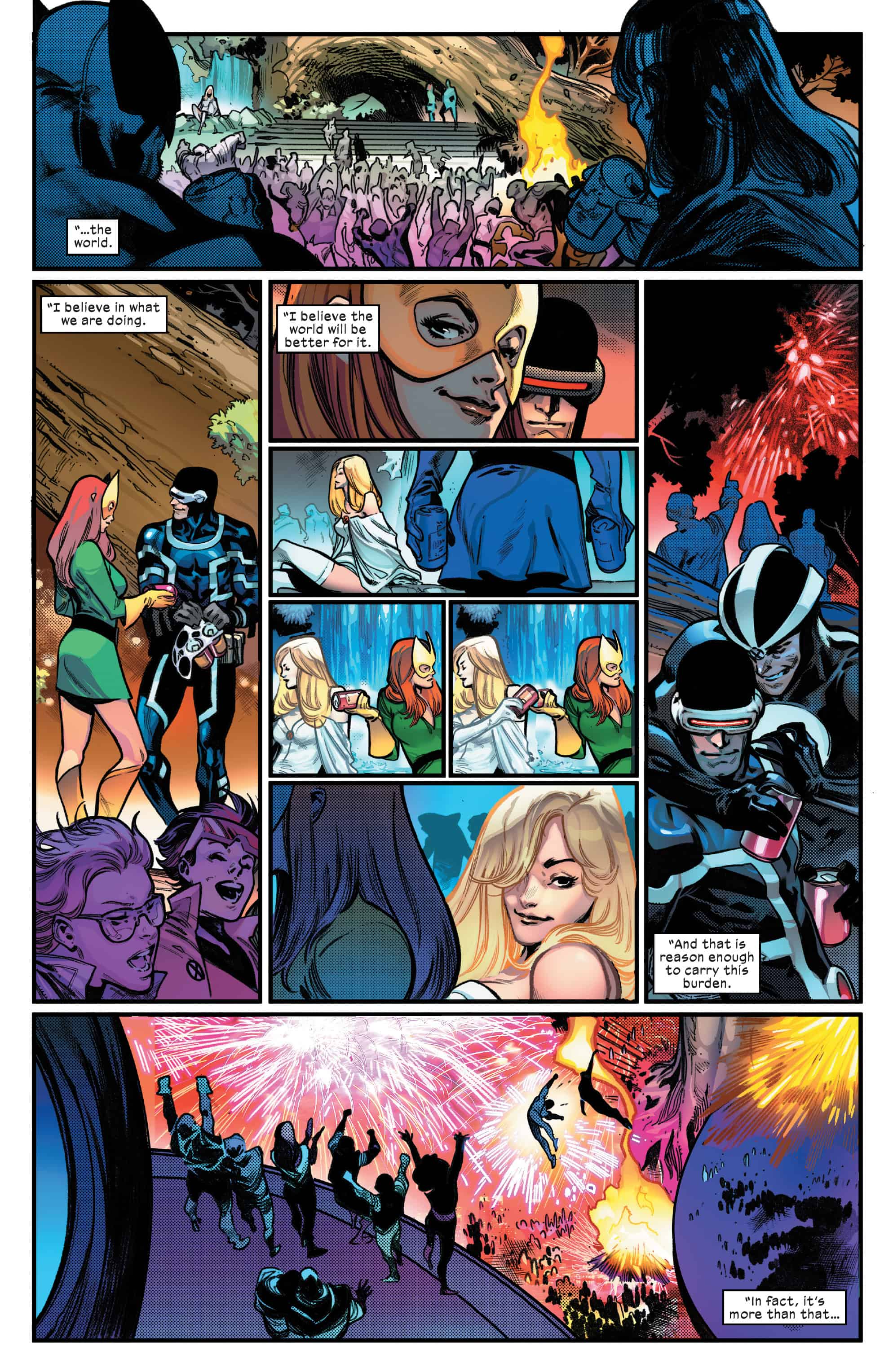 In the creation of the laws (Human life is sacred; The Land is sacred; Mutants should make more Mutants) we’ve seen that their priorities are much the same as they always have been (protect a world that fears and hates them and make a space for Mutants) but they’ll be pursuing these goals in a more proactive way. As Xavier said in a voice over, he has been watching his children die for decades: it’s time to let them finally live.

The characterizations were all spot-on (vanishing the disconnect) and more importantly everyone with dialogue said something that both captured their personality and furthered the plot. Jean regained some of her badass attitude (oh Competent Jean, I’ve missed you!) and the text showed the difference between her telepathy and Emma’s. In their interaction with Creed, Emma had finesse but Jean has force — and that’s a difference which is often forgotten. I also LOVED that Emma and Jean finally look to be starting a real friendship. Jean remembers, at last, what she learned as a teenager but made herself forget.
I have to say that my favorite scene was the exchange between Mystique and Nightcrawler. She needled him, he referred to her by name, but she was also giving him the opportunity to speak. I doubt that they will ever view each other as ‘family’ in the traditional sense, but the groundwork is there for healing. It was also extremely satisfying to know that the Advent of Krakaoa has not led to the formation of a creepy mutant cult. The faiths that were, remain. And of course Nightcrawler would use the Bible to segway into talking about sex.

The council itself was perfectly balanced. Ideals (in Summer), the elders (Winter), finance (autumn), and culture (spring). Everything you need to build a culture. The art was, once again, absolutely breathtaking. It’s amazing exactly how much detail Larraz can force into a panel — without anything ever seeming rushed or cramped. His work is an absolute delight to observe.
While I’m certain that the final issue will contain some ominous switch, this one ends on an extremely positive note. And I am grateful for it.
Reviewed by Bethany W Pope

After the darkest hour comes, at last, the sunlight. This issue is both joyous and deeply important to the future of the series. Pick up House of X #6 (Hickman, Larraz, Garcia, Curiel, Cowles).