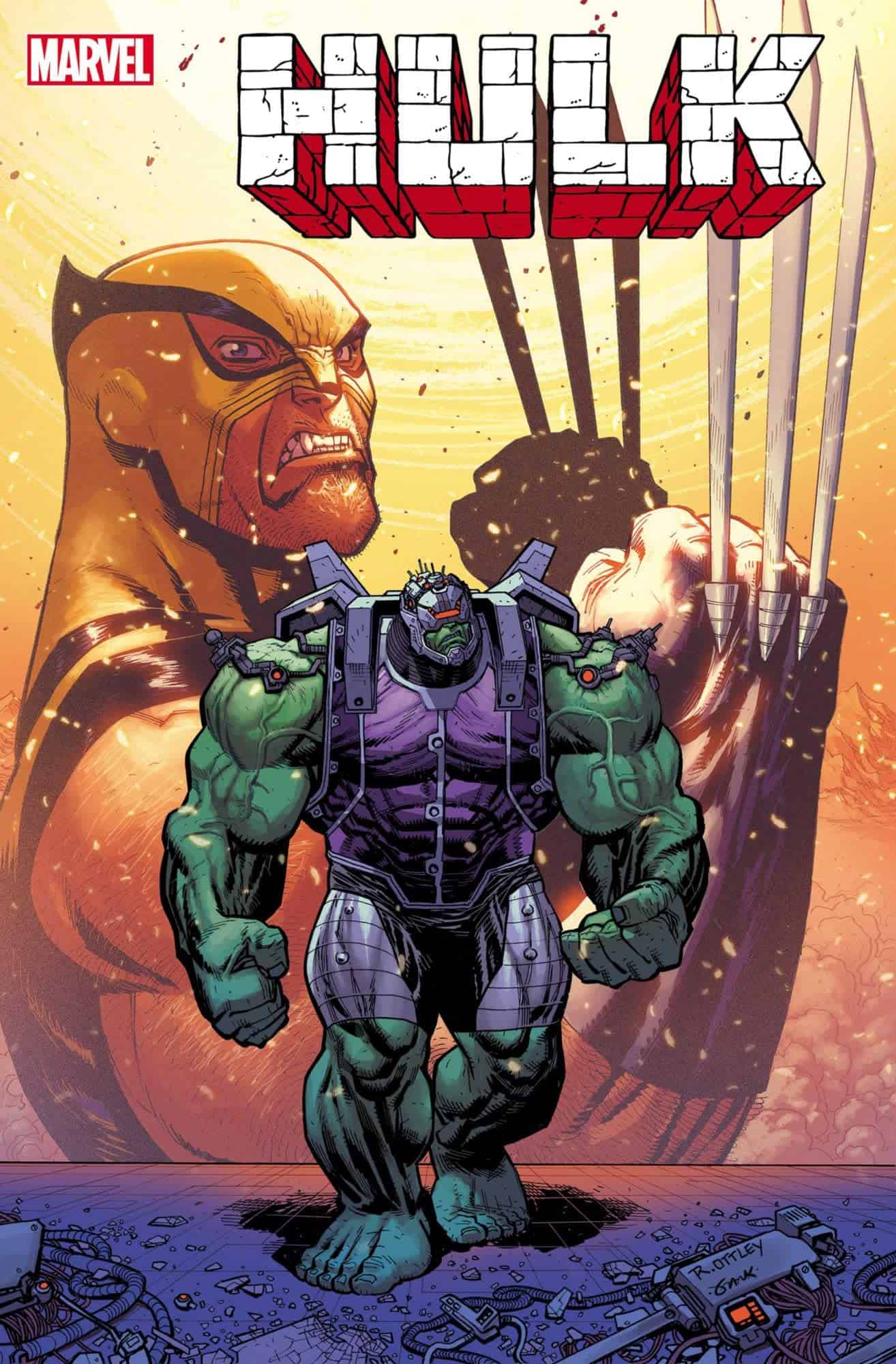 Hulk is a spaceship and Bruce Banner is flying him in his brain. Hulk also wears a VR visor for this purpose. Bruce uses Mental Hulk Rage Power to throttle his Hulk-spaceship power like some sort of gamma-golem with a motorboat engine. Hulk-with-brain-Banner-pilot has now met another Bruce Banner, with an eyepatch.

Look, it only sounds crazy when you say it out loud, okay?

“High-concept” doesn’t even begin to describe the sheer lunacy in Donny Cates’ and Ryan Ottley’s Hulk run. Even just three issues in, it’s hard to describe what’s going on without sounding like a lunatic and/or high. The problem is, three issues in, I’m not entirely sure if that’s a good thing or a bad thing.

On paper, it’s at least theoretically always a good idea for a creator to say, “I tried something different.” Cates is determined not to just write the same ol’ “Hulk smash,” which is a good thing indeed – after all, Al Ewing’s body horror take on the Jade Giant in Immortal Hulk wound up paying HUGE dividends for all concerned.

The difference is, Ewing’s approach, though wholly unique, ultimately wound up feeling organic to the Hulk mythos of authors past, particularly expanding on concepts long-codified by Peter David and Bill Mantlo. Cates’ far-flung take on the characters – at least so far – is starting to feel like it’s just weird for weird’s sake. It would be unfair to ask for a grand thesis a mere three issues in, but so far it’s very hard to tell where exactly his story is going, or how it contributes to Hulk lore other than just being an odd misadventure, not unlike Jason Aaron and Marc Silvestri’s run from about a decade ago.

It also feels like an odd decision that rather than explore this newest Hulk/Banner dynamic, instead Cates is subverting the narrative toward what can only be assumed is a Banner from another dimension (Cates never actually specifies, but it isn’t a massive leap in logic either). There’s an interesting “what could have been” with this Banner’s story, which definitely leads to a cool double-splash from Ottley, Rathburn, and Blee, but the entire subplot feels like the story is veering way too far off course at a mere three issues in. Also of note, there’s a briefly-simmering subplot involving some sort of “monster Hulk” in Banner’s subconscious, but it only flickers long enough to let us know something’s amiss. And as for the final-page cliffhanger, well, without spoiling let me just say I was exceedingly underwhelmed. That sound you heard was a thousand readers simultaneously muttering, “Who cares?”

Art-wise, Ottley, Rathburn, Martin, and Blee continue to do a bang-up job. Some of Ottley’s more gruesome panels will likely be unappealing to some readers, but nothing bad can be said other than the occasional misuse of space. There’s a double-splash about midway through the issue showing what happened to Eyepatch Banner’s world, and while I realize it’s supposed to be large for the sake of making an impact, the sparse detail makes it feel like it was just done to eat up the page count instead.

Donny Cates’ Hulk tenure had me excited at first. then that excitement waned with what felt like a rushed but mostly still-entertaining second issue. Now, though, I’m beginning to have some serious misgivings about this run. Cates feels like a kid who has been given full reign to run wild and play with whatever he wants in a toy store, but doesn’t know what he wants to play with first so he just plays with everything for a few seconds at a time without ever really committing. With three chapters remaining in “Smashtronaut,” I truly hope he finds his mojo, because he’s too talented a writer to be making mistakes like this so early in the game.

Donny Cates' and Ryan Ottley's Hulk run started with a lot of wild promise, but three issues in, that promise is dwindling quickly into a mountain of half-thought-out ideas.