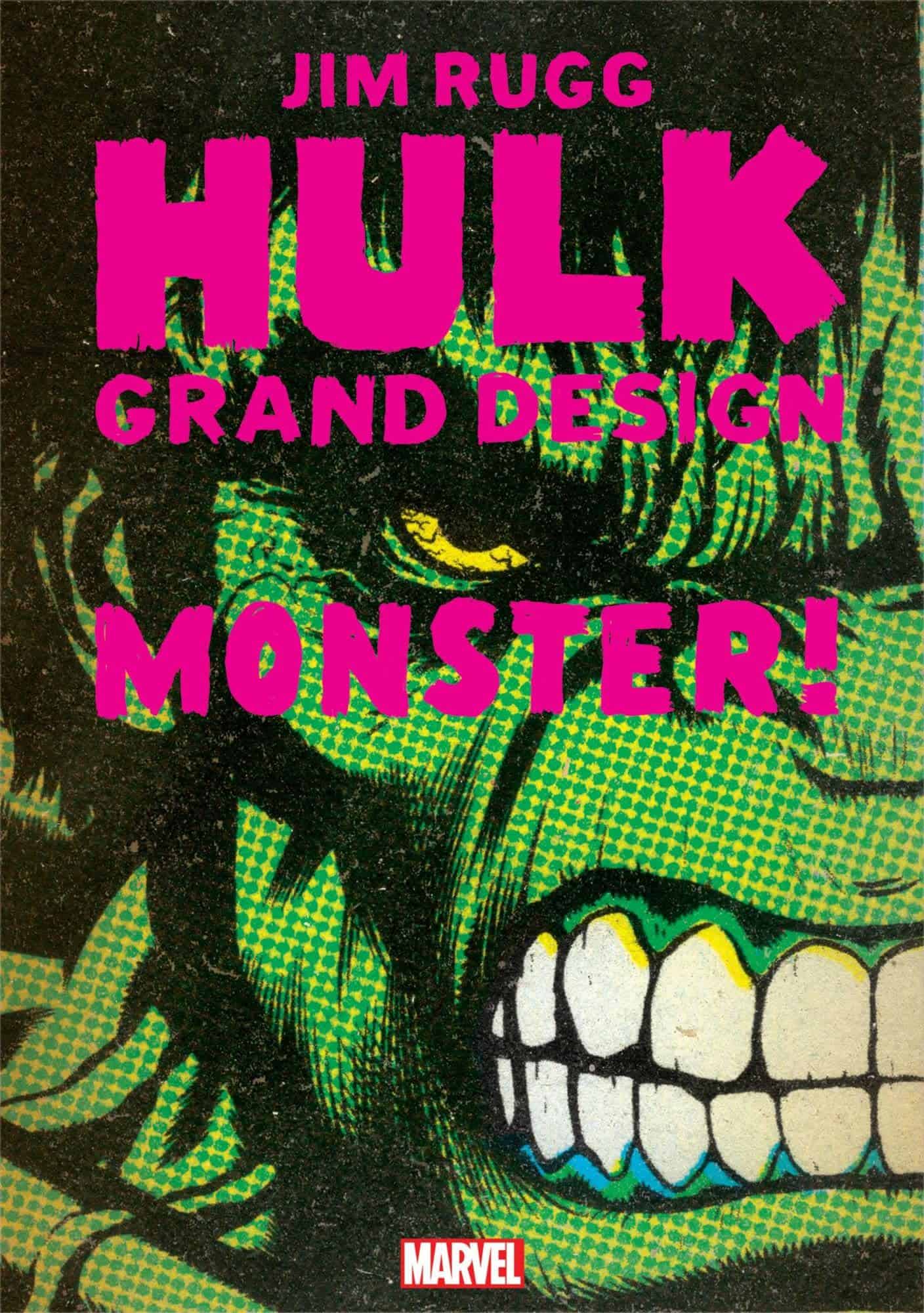 The acclaimed Grand Design franchise continues! Writer/artist Jim Rugg follows in the tradition of Ed Piskor and Tom Scioli by unfurling the full saga of THE INCREDIBLE HULK, from the very beginning to the present! Witness the biggest moments in the Hulk’s history through the eyes of a single visionary storyteller!

Marvel’s Grand Design series/line/canonizing text has two installments: Ed Piskor’s X-Men, and Tom Scioli’s Fantastic Four. Both books have certain things in common: high panel-count pages, heavy captions, and a general adherence to a single visual style. Their main job is to bring order to the unruly decades of continuity generated by countless writers and artists. Both are singular works that really can’t exist outside of comics, hammering thousands of pages into dense, unwieldy, awkward, but altogether brillant reads.
Jim Rugg’s Hulk Grand Design: Monster dispenses with the more literal mandate established by Piskor and Scioli, and opts for a more freewheeling and conceptual tale, emphasizing cartooning and visual flair over a fully fleshed-out sequence of events. The results are inconsistent, but Rugg’s art is forceful enough to overcome the somewhat disjointed and underwritten script.
The story begins with a striking image of Banner caught in the explosion, which gears readers towards more of the (very good) same. The page turn, broken into a standard, less-dense layout with much less captioning, makes clear the shift in philosophy here. From this point, through the end of the issue, Rugg showcases a subtle visual evolution as time passes, a big shift from Piskor and Scioli’s more consistent visual language. Figures become more detailed, inks become more feathered and expressive, poses more dramatic, the layouts evolving with each subsequent event. The effect on the first read is so subtle as to be unnoticeable, but it becomes clear on a reread. This simple touch is one of the most outstanding parts of the art here, with Rugg displaying a versatility that can capture the changing methods of the sixties to the eighties without feeling cheap or brazen. His figure work is clean and goes from Kirby to Buscema to Zeck, his style always adhering while still keeping enough of his own personality to really make it his own.
Rugg peppers the book with a variety of small visual flourishes, incorporating collage, newspaper clippings, mock covers (with a cool seventies manga magazine cover on one page), and a heaping helping of experimentation throughout. Rugg is clearly working to bash things into place here, and for the most part, it works. His script emphasizes the tragedy of the Hulk, a lonely, wandering monster who wants peace, and goes back to that theme for every beat. It’s a strong distillation of what makes the Hulk compelling, with every piece of fat stripped away. All that’s left here is Hulk doing the only thing he can: raging against everyone who won’t let him be, everyone who’s scared of him, anyone trying to pick a fight. Hulk is a fundamentally sad figure, and Rugg identifies that rhyming story over the course of Monster. It also, through Hulk’s interactions with the Marvel Universe, from MODOK and Juggernaut to Silver Surfer and Doctor Strange, highlight his versatility as a storytelling tool, fitting neatly in body horror, monster movies, heady sci-fi, and mystical weirdness. It almost comes together by the end.
But the entire issue feels underwritten and disjointed. The lower informational density of Monster compared to X-Men and FF can make pacing a little strange, but the storytelling economy of Rugg’s pages rescue it from being outright confusing, and it never descendes into incoherence.
Rugg’s full-page splashes are jarring, throwing off the rhythm of the story. Each time they appear, the story grinds to a halt, demanding to be examined and absorbed. It’s a nice touch, and are the most whiz-bang amazing parts of an impressive display of art, but they feel a little tacked-on. (That Hulk #181 reproduction, that one is cool, the best of the bunch.)
However, those are mostly minor quibbles over a book that is a loving and lovely tribute to the Hulk. Rugg decided to go in a different direction for his Grand Design. The results are inconsistent, but its art, a compelling showcase for a great cartoonist, more than makes up for any shortcomings in the writing.