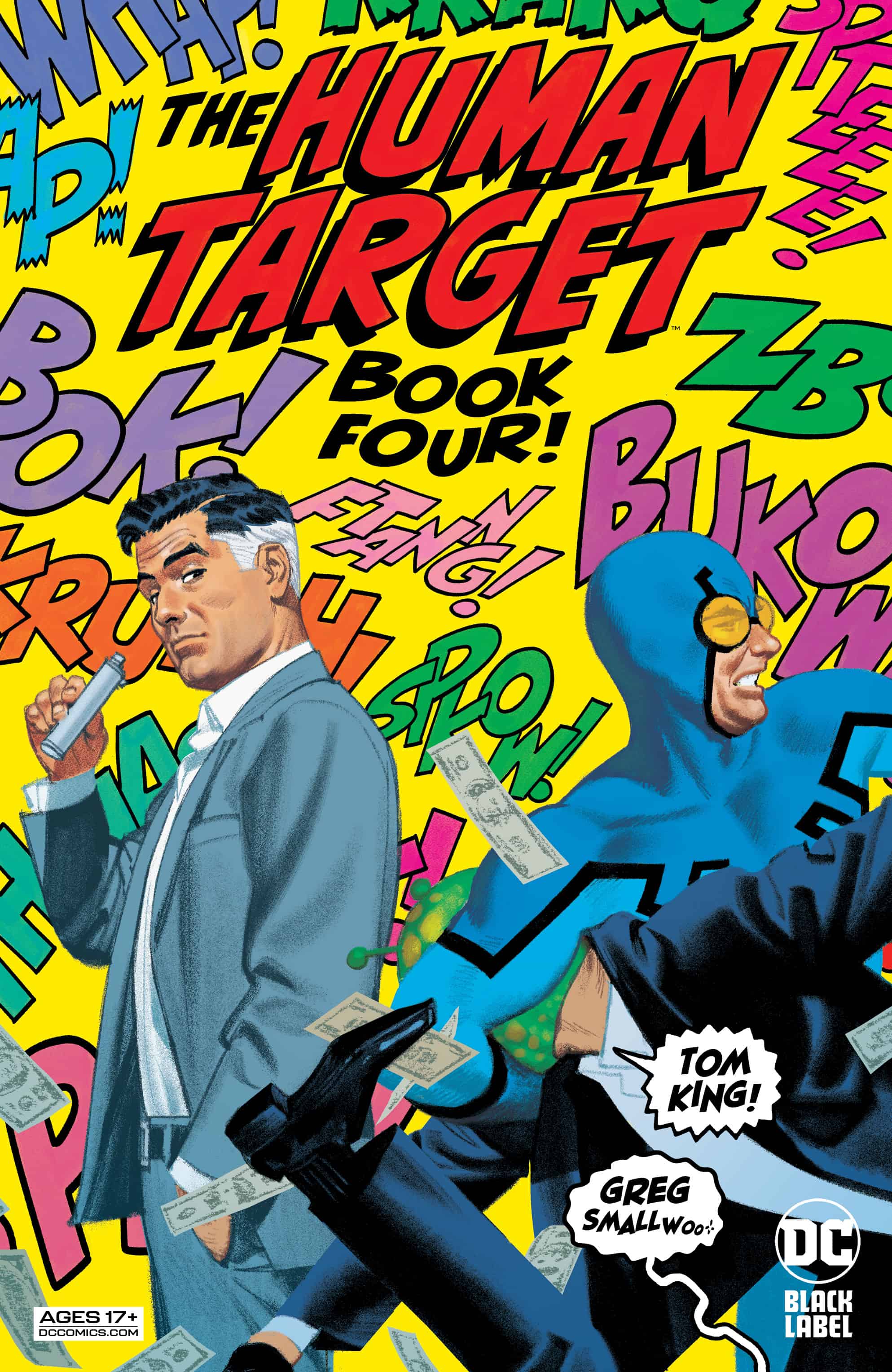 After adding Booster Gold as a person of interest and finishing his dust-up with Guy Gardner, Christopher Chance continues his investigation of the former members of Justice League International with Ted Kord, The Blue Beetle. With Ice at his side, can Chance figure out what Kord knows about his assassination or will his case become further derailed by their heroics?

Sometimes you just need the right character to tell a story. 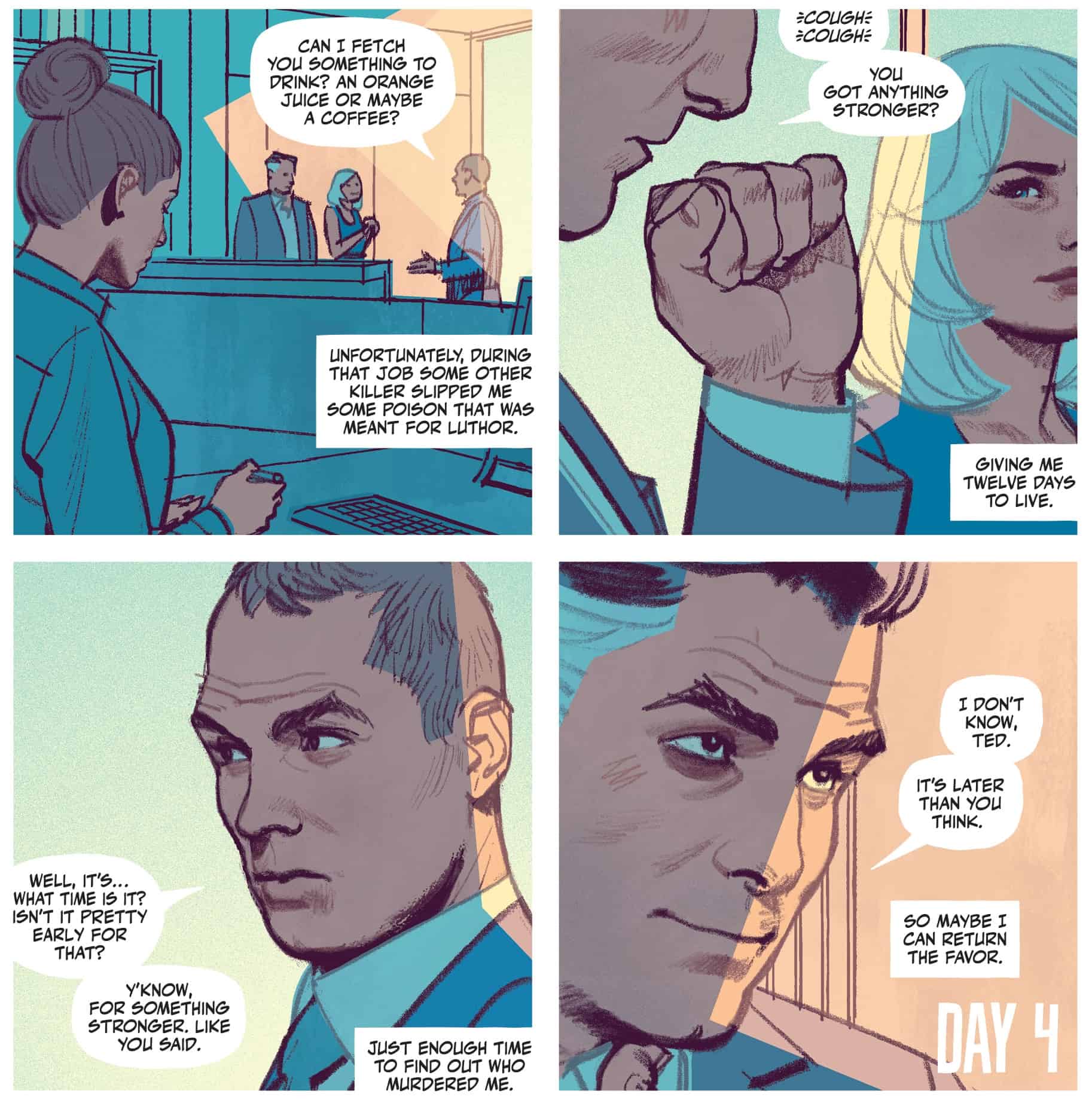 I think Tom King does his best work when he takes characters that either haven’t been seen in years or have been perceived as jokes and turns them into something completely different. It worked for Kite-Man, less so for Booster Gold, but has completely rejuvenated The Human Target. While the character had some success with his TV show and a one-off appearance on Arrow, it really has been almost twelve years since he’s had any sort of relevance in the pages of DC Comics.

What makes this book work is King’s commitment to the bit. He acknowledges that Christopher Chance isn’t a superhero, he’s essentially a bodyguard with some light detective skills that finds himself in a world that he doesn’t understand, with completely different rules of engagement. King utilizes noir storytelling with a lot of darkness and introspection while also being respectful of the colorful world of capes and cowls – when Ice and Beetle are fighting crime, it’s not taken as a joke, but as an earnest effort that Chance finds himself fascinated by. At the same time, readers are also given hints that Chance has also sort of resigned himself to his fate, having been poisoned by one of the members of the former JLI and he still wants some measure of justice from them. 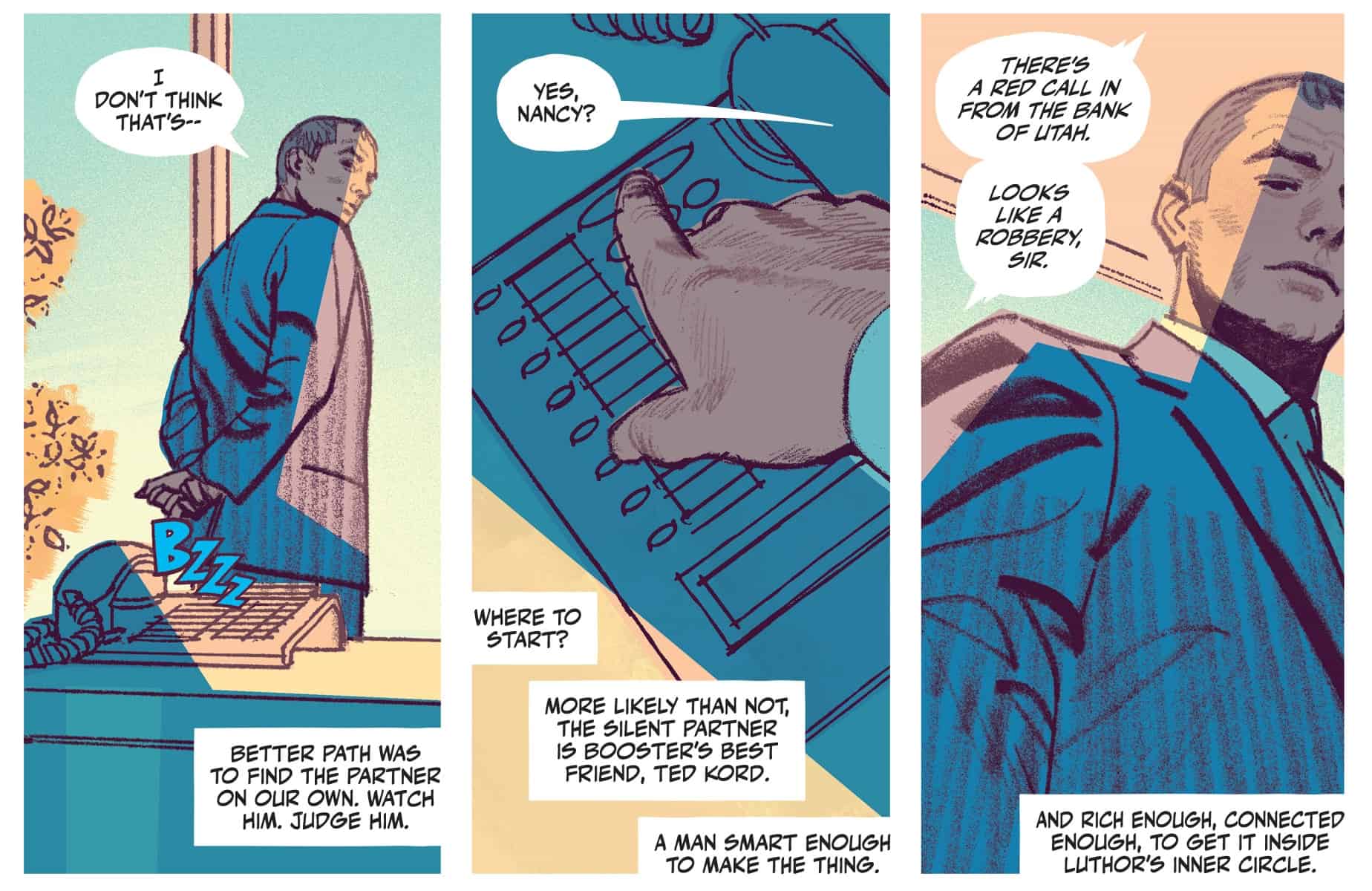 One of the best ways that King succeeds is his characterizations throughout the issue. It would have been very easy to make Ted an anxiety ridden buffoon, but King emphasizes his intelligence and capability as a hero, even though he’s something of a motormouth. Ice, as well, is given a lot of shine, playing the part of the seductive love interest with a secret – she’s far stronger than any member of the JLI has given her credit for and Chance picks up on that. She could easily have killed Luthor if she were the culprit with her ice powers, but maybe the poison was to throw off the scent? Or she’s doing her best to distract and protect whoever did commit the crime, but it’s still too early to tell.

Greg Smallwood might be one of the best comic book artists working today and every piece of art in this book is absolutely gorgeous to look at.

Human Target books are either very grounded or very action heavy to emphasize the hectic nature of Chance’s job and Smallwood does a great job of blending those styles here, while also showing the dichotomy between Chance’s world and the greater superhero world as a whole. While Beetle and Ice are doing their superheroics, Chance is analyzing them. Smallwood puts great care into his close up shots, showing the skepticism in Chance’s face while he tries to figure out who killed him and also giving us small glimpses into the comfort he feels when Ice rests her head on his shoulders or grabs his hand (or thigh) when she thinks he’s asleep. He’s contemplative and questions every action to rule out possibilities. 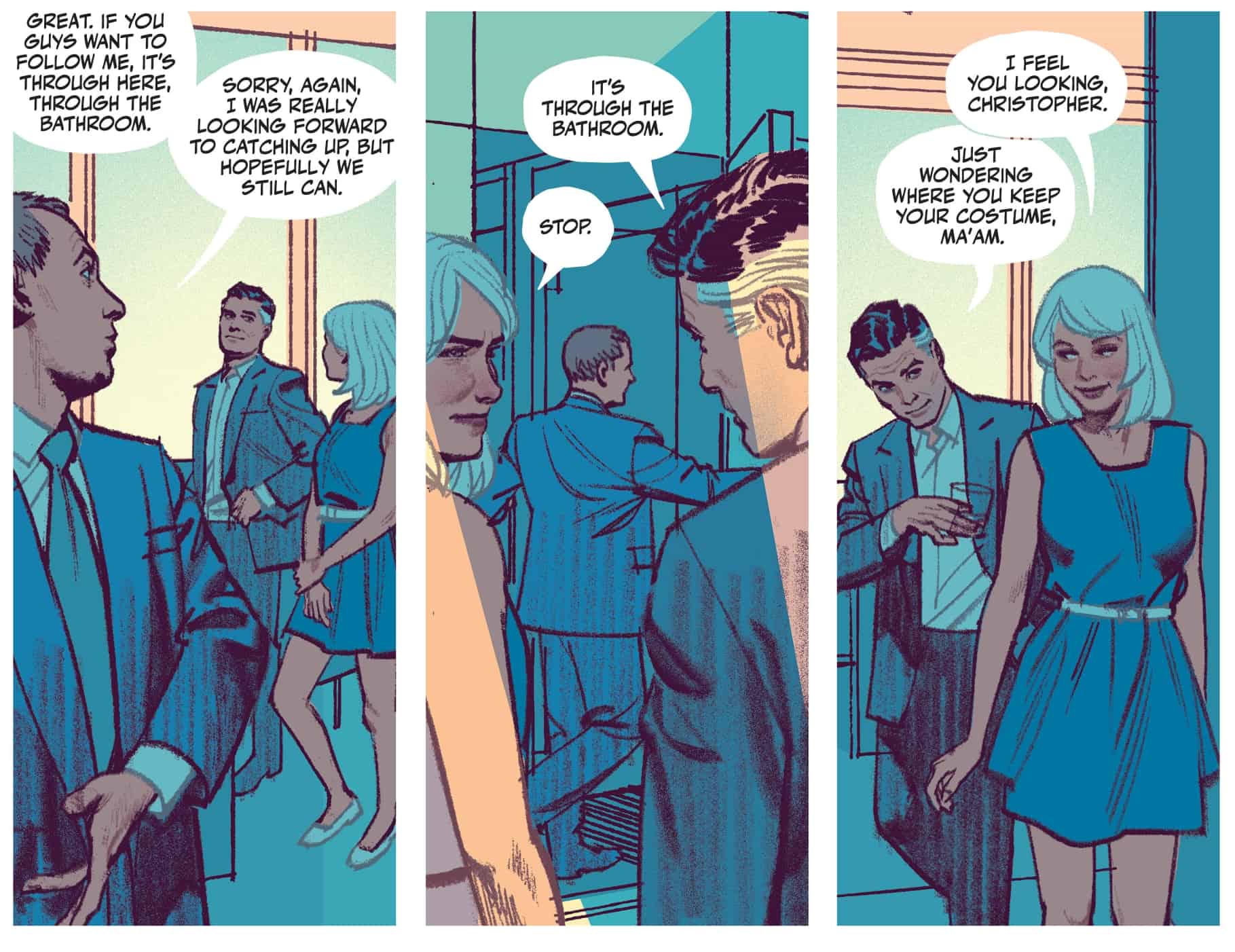 At the same time, Smallwood has an excellent eye for sequential art as well, utilizing the nine panel grid in a few scenes to show movement or the advancement of conversation. These moments feel intimate with them usually taking place during the downtime of the story, but they give us the most information; be it about Ted’s own thinking as a detective or simply he and Chance having a drink together. My favorite, however, are the pages of wide shots with Chance and Ice, showing just how intimate the pair are becoming over the course of the investigation. As previously mentioned, Chance and Ice have grown closer, especially after a day on the beach in issue two and dealing with Guy Gardner’s jealousy in the previous issue. Smallwood captures two sides of Ice using only her hands and it’s possibly better characterization than she’s gotten in years.

One of the most standout things about Smallwood’s art is his commitment to minimalism in his colors. Backgrounds mostly consist of simple colors with rough-ish line art for buildings, vehicles and other small details. One great example of this is the use of different hues of blues for Blue Beetle and Ice’s costumes as well as the background of the Bug that they travel in. This allows for the thicker lines around the characters to pop, bringing the focus towards them and their body language in certain scenes. It also does a great job of showing a contrast between them and Chance who is only shown in a regular grey suit for the entire issue. 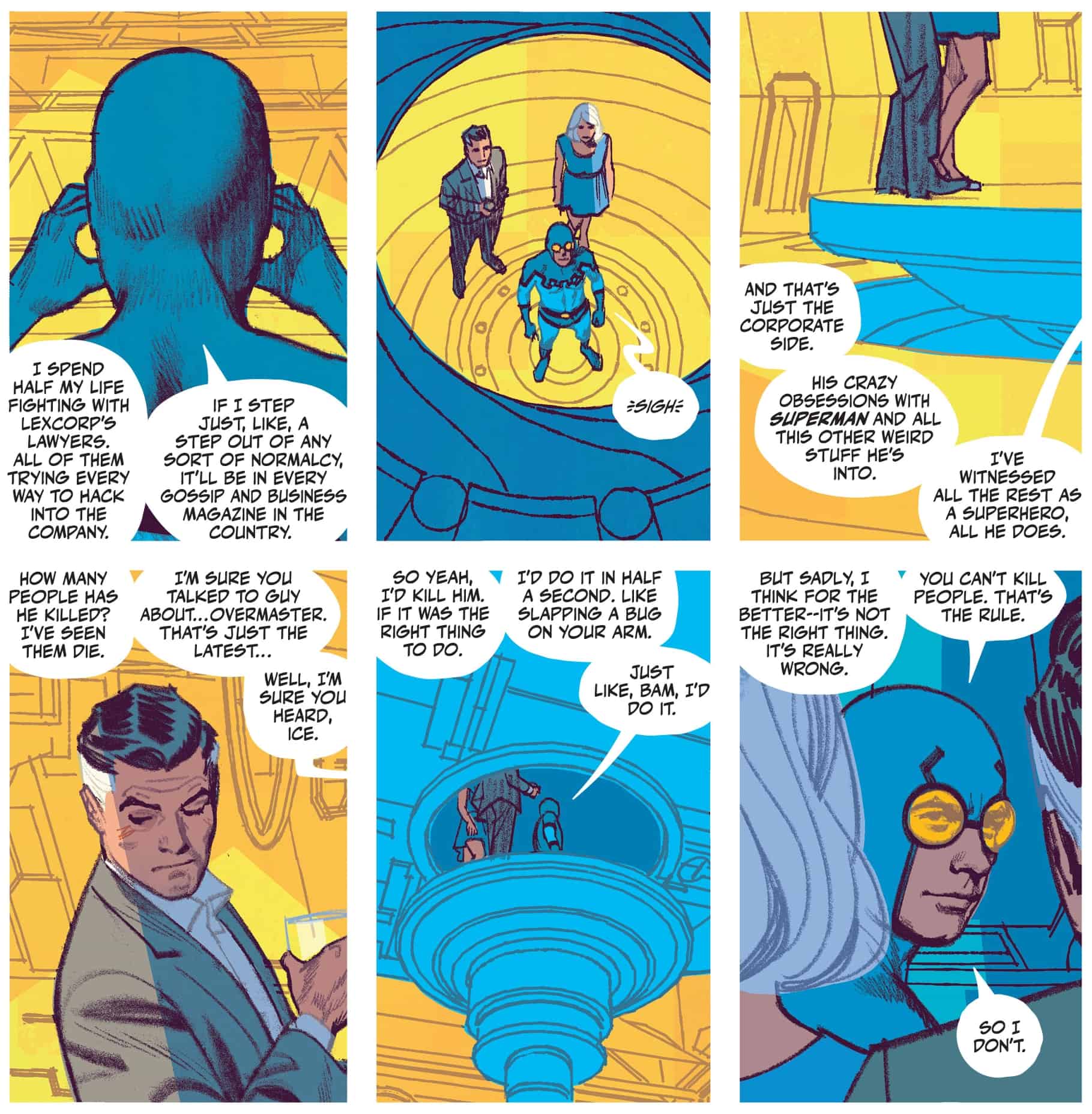 What I love most about Clayton Cowles’ lettering in this book is how unobtrusive it is. The word balloons and thought bubbles have no outlines, further lending themselves to the minimalism that Greg Smallwood is going for. They move freely between the gutters of the comic when they need to and don’t pull focus away from Chance’s expressions. They make excellent use of the empty space in the panels and help to give them even more emotions at times. And of course, I would be remiss not to mention the amazing use of BAMs, POWs and BIFFs during an off panel fight when Beetle and Ice stop a bank robbery. I do love those cartoony bits of wording.

The Human Target might be the noir hit of the year. While not exactly an obscure character, The Human Target has never quite been the most popular either.  But with the quality that this team has  put out so far, it's doing much better than we could have expected. Tom King, Greg Smallwood and Clayton Cowles have managed to pull off something amazing with The Human Target and here’s to hoping they continue hitting the mark.