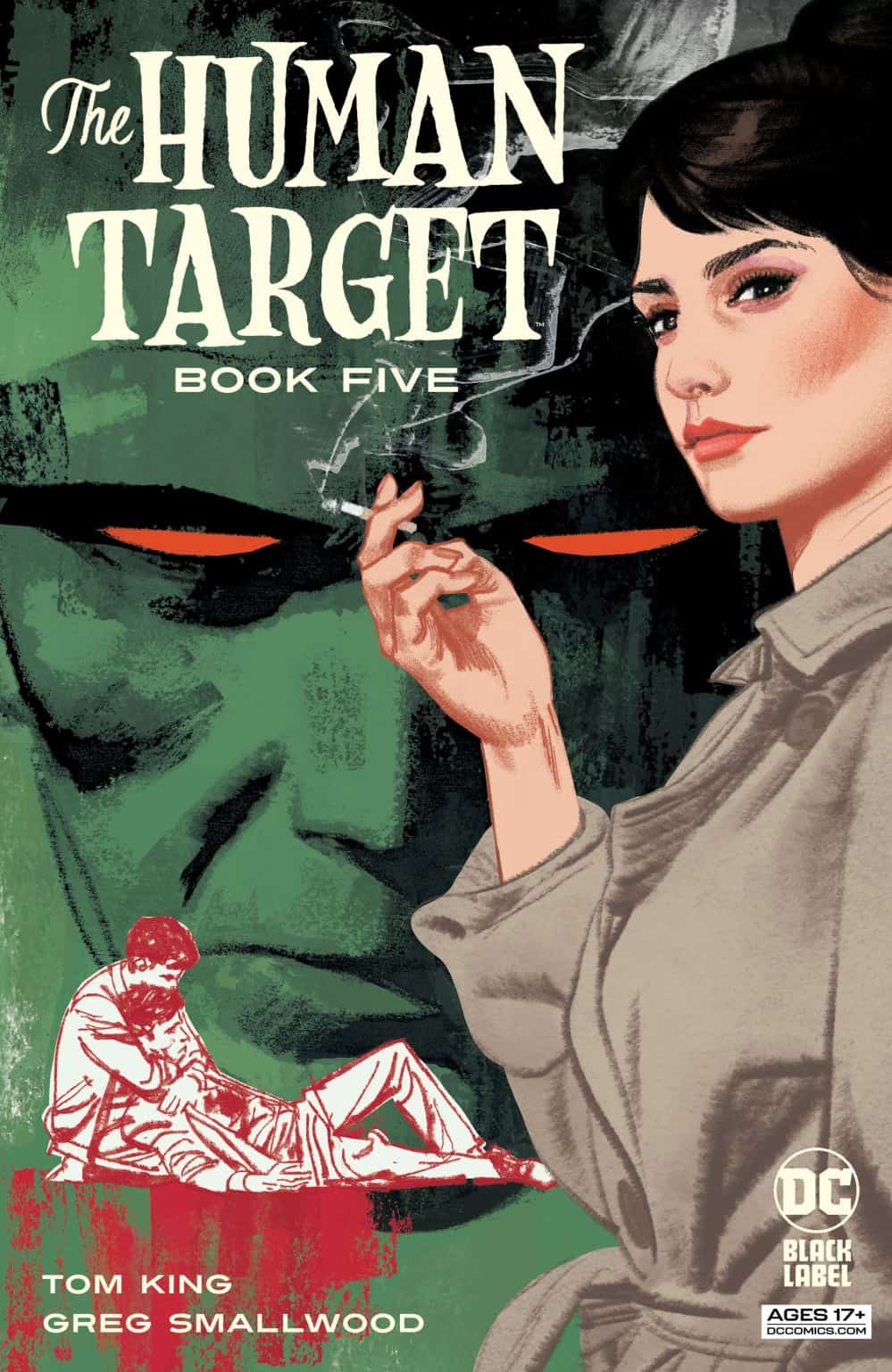 After a superhero outing with Blue Beetle and Ice, Christopher Chance is no closer to figuring out who tried to kill Lex Luthor and ended up poisoning him instead. However, with more JLI members to interview and seven days left to live, his attention is turned to Martian Manhunter. Can the man from Mars give the Human Target the answers he needs before he finally dies? 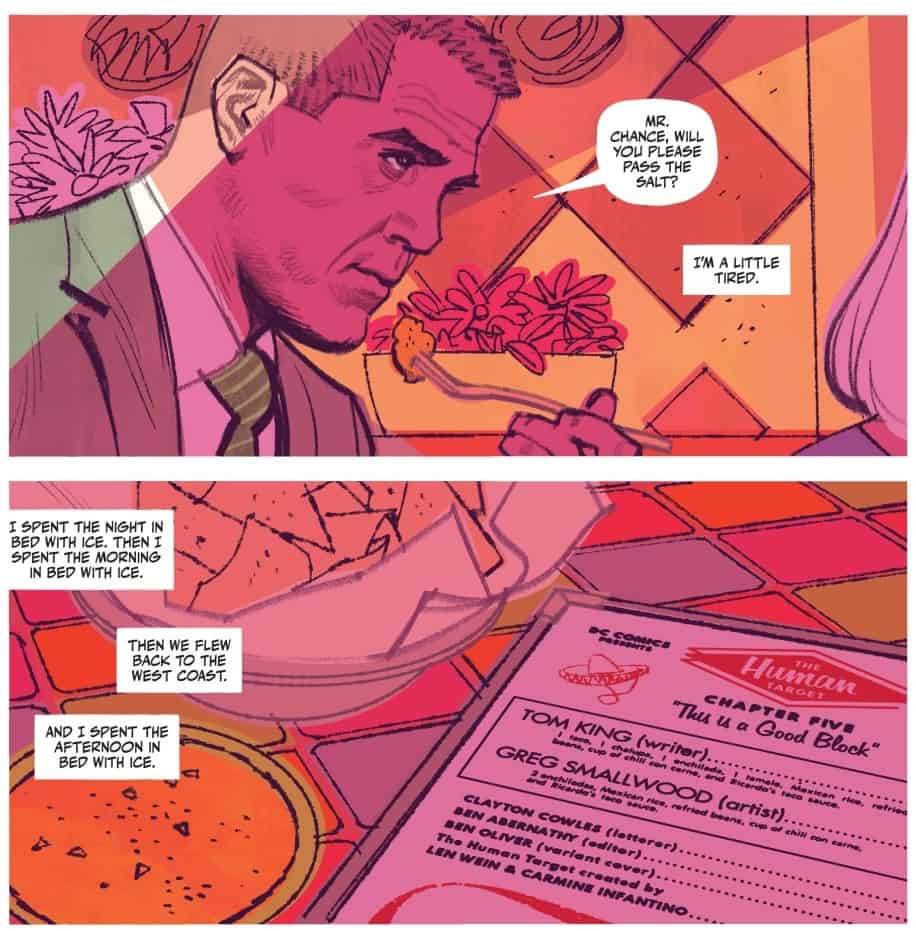 While I enjoy a lot of Tom King’s work, I find that his method of storytelling can be quite disjointed as he leads you on a trail that winds and branches off in a million directions before coalescing at a pretty good endpoint. But for casual readers, or people not used to his style, it can be quite the confusing reading experience. While this issue was fantastically written and wove together the origin story of The Human Target and his current case, things felt very jarring as moments and memories were being intercut between the two focus characters of the book, the second being J’onn J’onzz, the Martian Manhunter.

Centering on two key moments in Chance’s life, readers are made to understand why he became the Human Target and training that he received to overcome psychic probing of his mind. Through his psychic teacher Emra, Chance learns how to control what information other people can see as he himself backdoors into their minds. This works very well as it allows us to understand exactly what Chance’s meeting with J’onn was all about – allowing the mind-reading Martian to parse The Human Target’s knowledge while Chance himself reaches back in and gains information for his investigation. This shows that Chance isn’t just a guy who can take a bullet, but that he also has the savvy to outsmart a mind-reader as well. 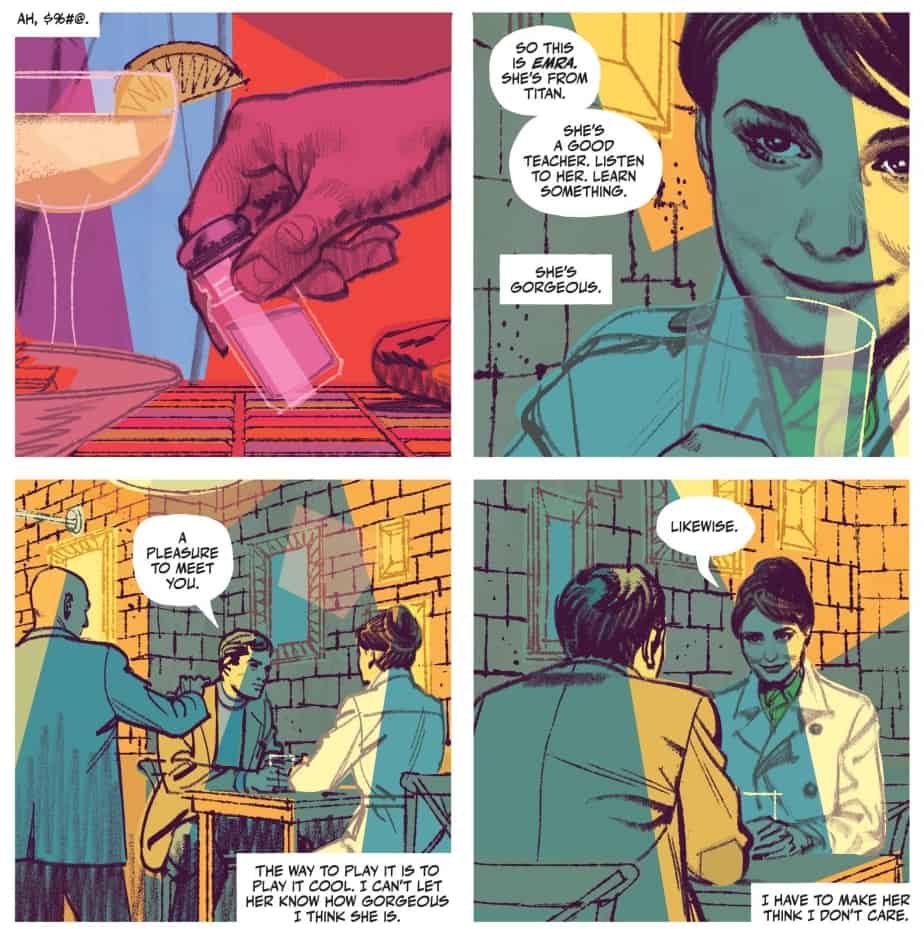 One of the most interesting parts of this book is how much it expounds on Chance’s past thoughts, from his mistrust of people in general, aversion to women involved in his cases, and his duty to protect anyone who needs protection – not just because it’s the job, but because he also feels like he has a duty to do so, even when the body he’s guarding is morally dubious. I haven’t read any prior Human Target series, but this does make me feel like I know who Christopher Chance is. A man who had a heart of gold, but slowly saw it tarnished because of the shade of grey that his line of work chooses to operate in. But because of that, he’s also able to see that the heroes of the world have their own shades of grey, giving him ample reason to suspect one of them for his murder.

Without a doubt, Greg Smallwood’s art continues to be one of the biggest draws to this book. While the story moves back and forth between memories and thoughts, Smallwood mostly does an amazing job of blending these moments together – notably when Ice is cuddling with Chance and then on the same page within the same four panels, he sneakily transitions to Fire cuddling with J’onn, who’s shifted to look like Chance, acknowledging that we’ve switched to a different memory. This shows his skill with sequential storytelling and helps to show how the future and past events mirror each other. 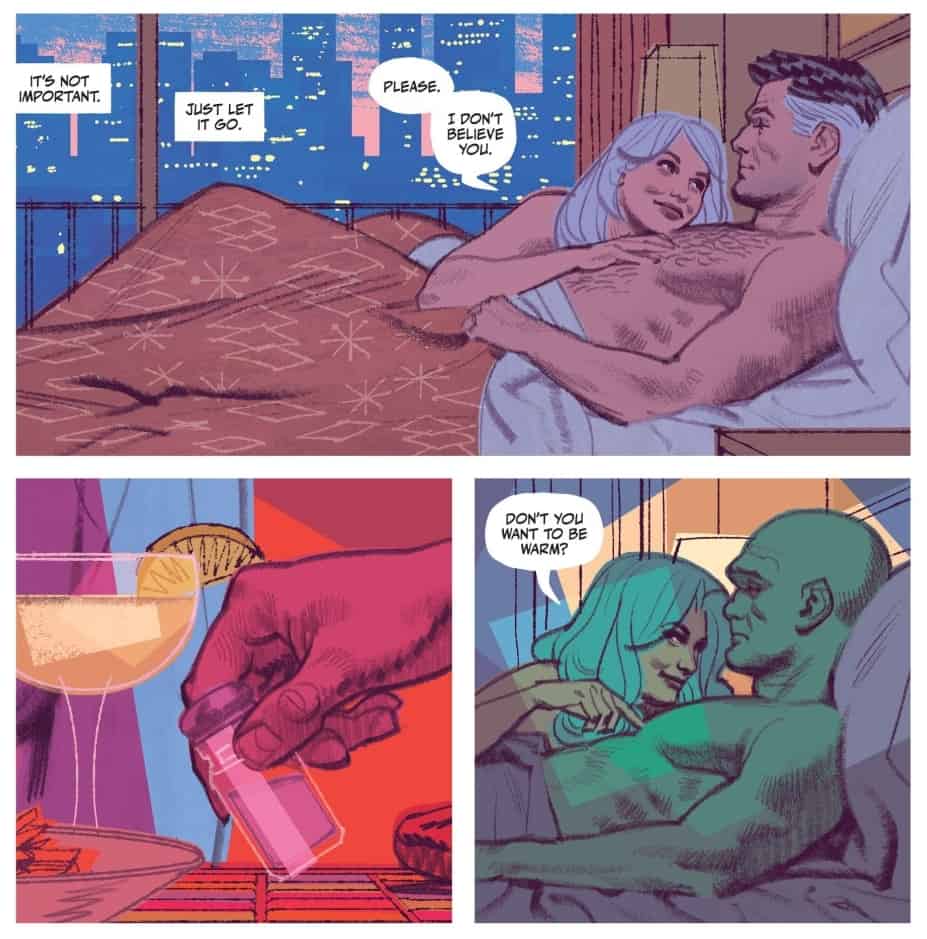 His use of colors also helps to convey emotions in each of his scenes. With memories set in Chance’s training period, there’s a yellow tone throughout those scenes that evoke the sense of betrayal that Chance will eventually face, but also reminds us that trickery is a large part of his job. Present day scenes are tinted with red to show the tenseness of the two way mind battle as Chance gathers his information while not giving away that he’s doing so to J’onn. And finally, the scenes in which Chance realizes what his life is meant to be has the backgrounds with a tone of green, indicating that he’s been reborn with an entirely new purpose following a tragedy.

Tom King, Greg Smallwood and Clayton Cowles continue to tell and engrossing and thoroughly enjoyable story! However, it may be slightly difficult to follow on a first read, but after a second or third, all of the pieces will fit nicely together into a nice, fun and heartbreaking story.