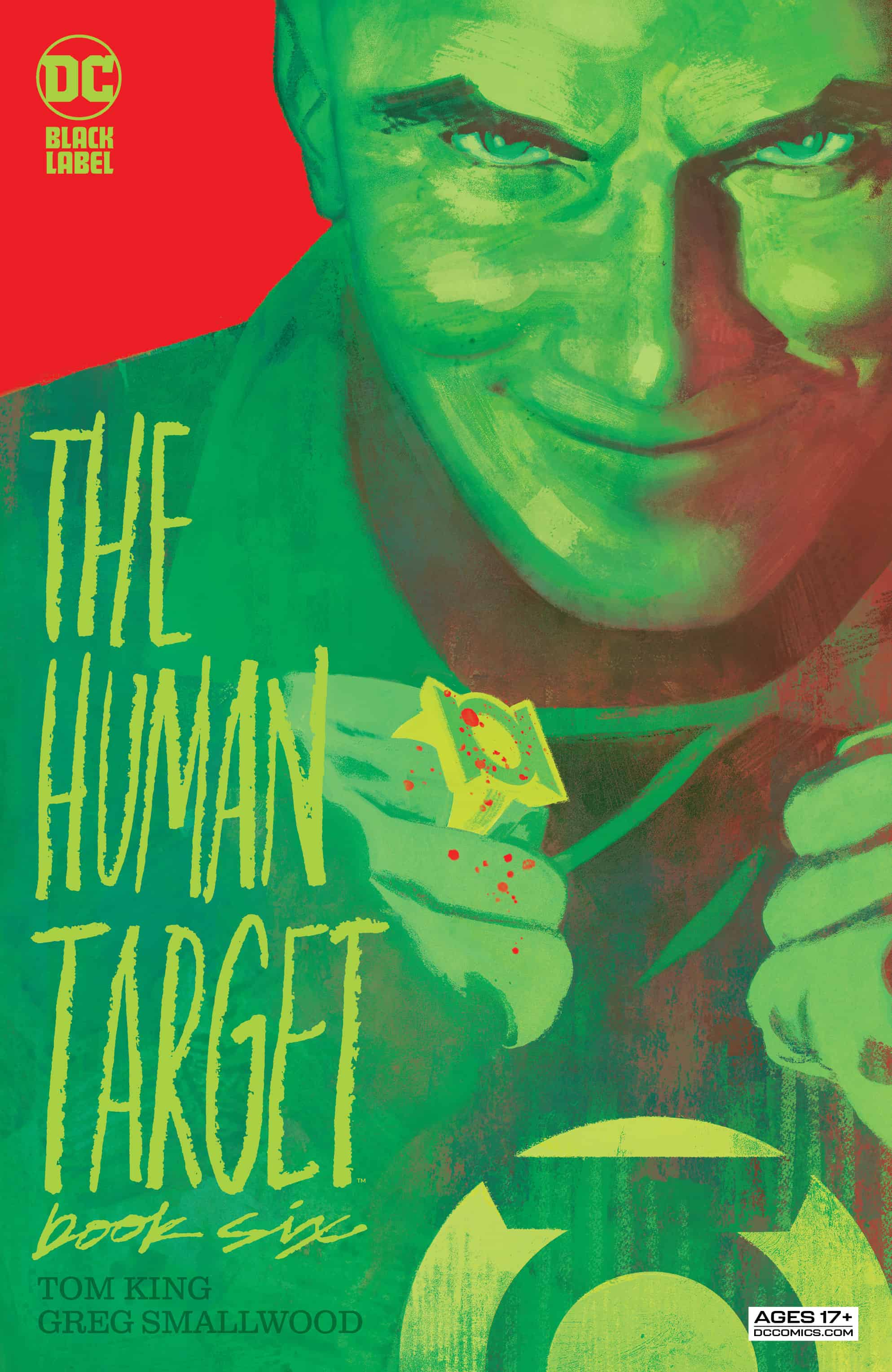 After a dinner with Martian Manhunter, Christopher Chance finally has a good lead that he can follow. But will conflict with Ice cause the investigation to derail itself or will a returning enemy put him fully out of commission?

All it ever takes is one punch. 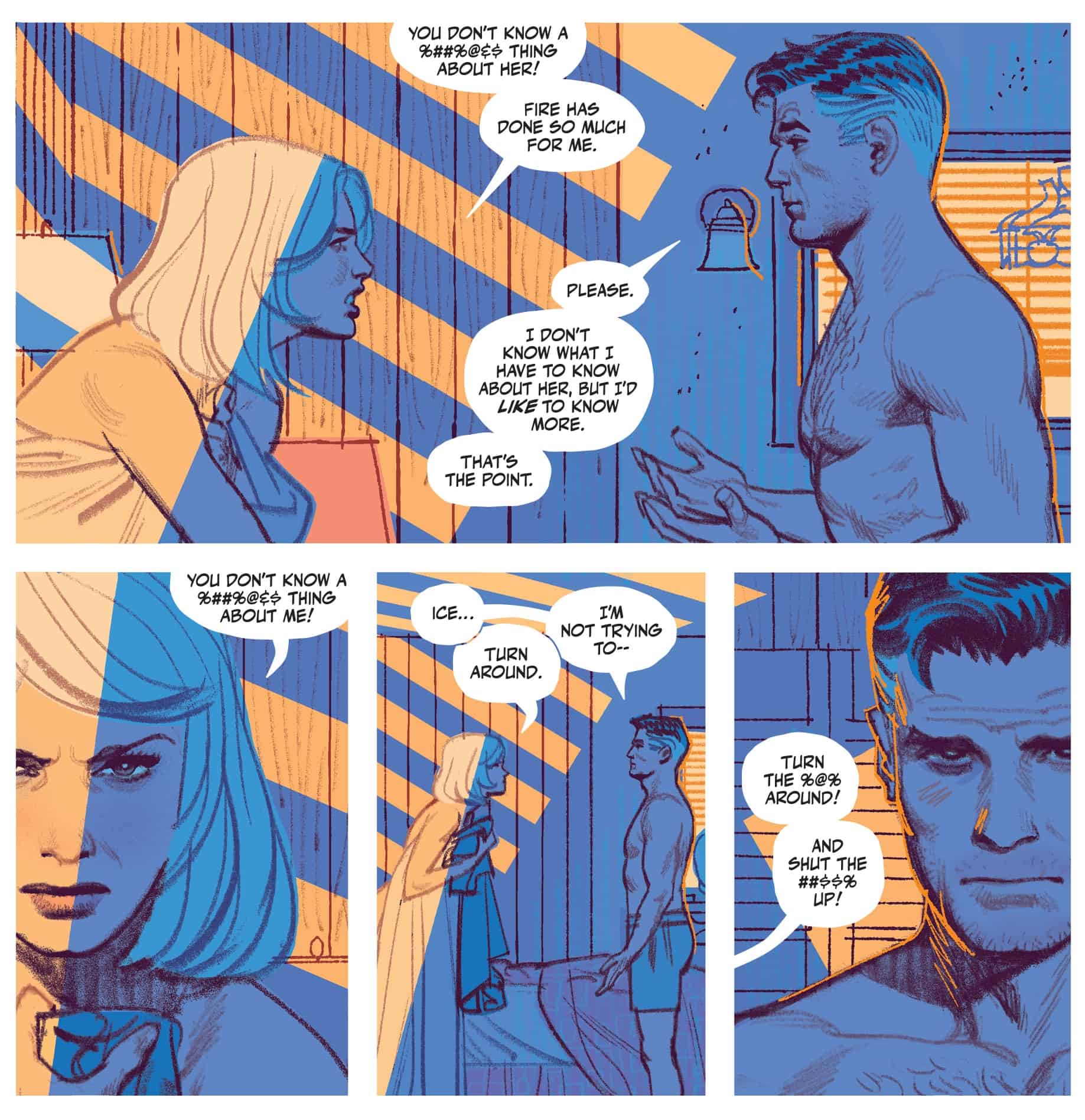 Tom King is very good at writing noir fiction. He’s been easily able to capture Christopher Chance’s suave nature while also giving us the introspection that’s so necessary for stories like this. At the same time, the story benefits from the times we’re able to see Chance at his lowest as well. Throughout these last few issues, we’ve seen Chance’s relationship with Ice blossom into more than just a fling, so it hits like a wrench when the inevitable argument over investigating Fire opens the issue.

Fire and Ice undoubtedly have a close relationship on par with Booster Gold and Blue Beetle, so it makes sense that Ice doesn’t believe she’s involved with Chance’s murder or wants to keep the trail far away from her to protect her friend. Even as she sees Chance coughing and hacking, knowing he’s only a few days away from his death she storms off with a resounding “No” at the notion of questioning Fire. It’s a powerful moment that shows that her friendship is a lot stronger than her four day dalliance with The Human Target and it only makes sense. Chance may be a good man who has saved a number of lives, but Fire and Ice have saved so many more as heroes. 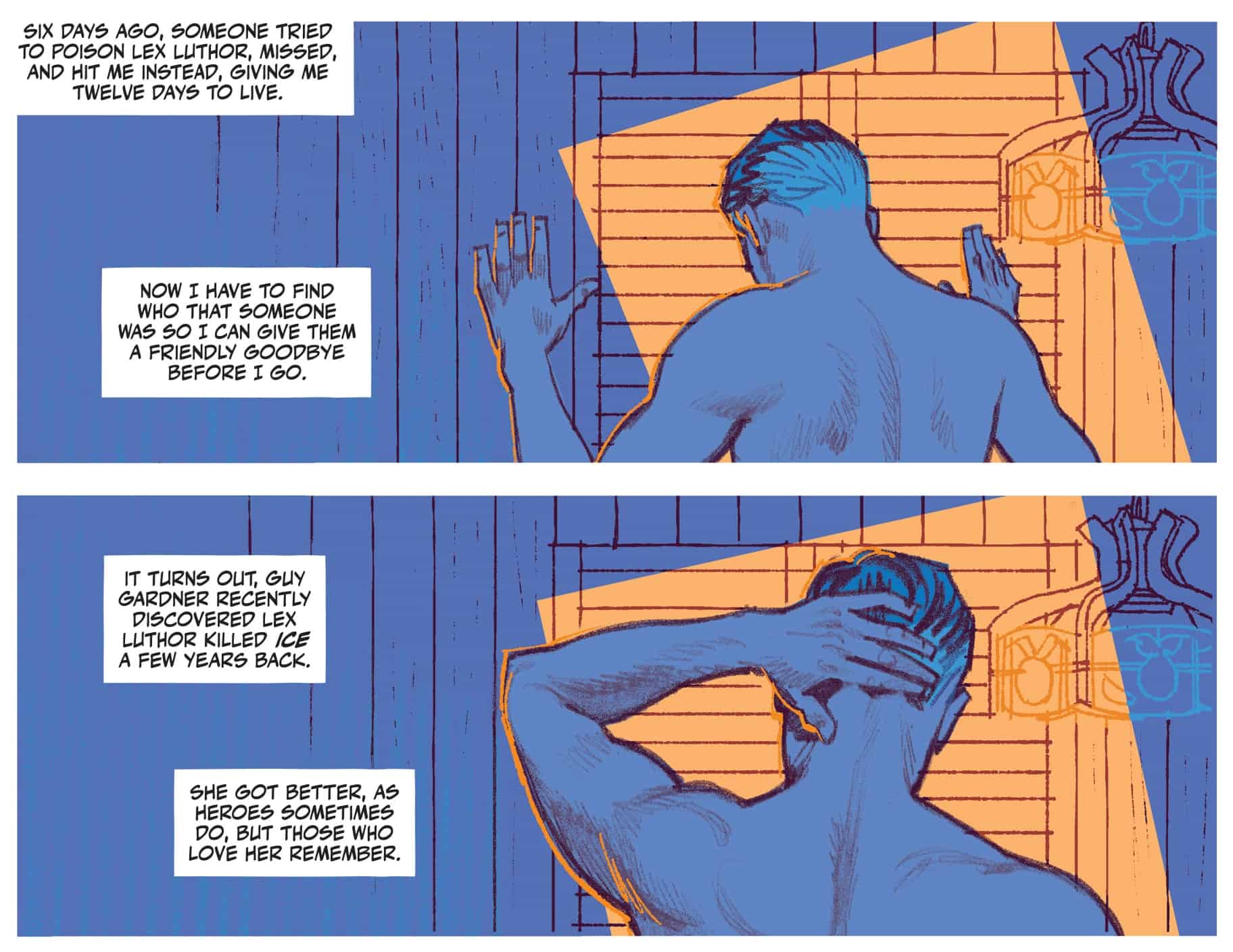 At the same time, Chance’s charm falls away slowly as we see him during his visit with Mid-Nite. The good doctor suggests that Chance should try taking a moment to go to church during such a trying time, instead of drinking and being angry about the situation. It’s legitimate advice and it’s what helps Mid-Nite be the superhero and surgeon that the community trusts so very well – but that’s another aspect that King writes Chance with so very well. Just a short bit of nihilism that allows him to laugh off the notion, especially since he has so little time left and just this case left to solve. It humanizes him and serves as a good parallel to himself and Mid-Nite, especially since Chance himself is not a superhero.

Greg Smallwood’s art says the things that King Doesn’t quite have the dialogue for. Throughout the issue, we see that Chance is looking far more haggard than he had been previously. His coughs are getting more violent and Smallwood focuses on that with intense close up shots and pained facial expressions. This is coupled with the presence of bags under his eyes, both a sign of how tired the poison is making him and a combination of his nights with ice and the amount that he’s drinking. During his talk with Mid-Nite, he even cracks a smile that doesn’t look practiced, like he actually finds amusement at the idea of going to church while thinking of a moment he had with his father, as told by the narration. 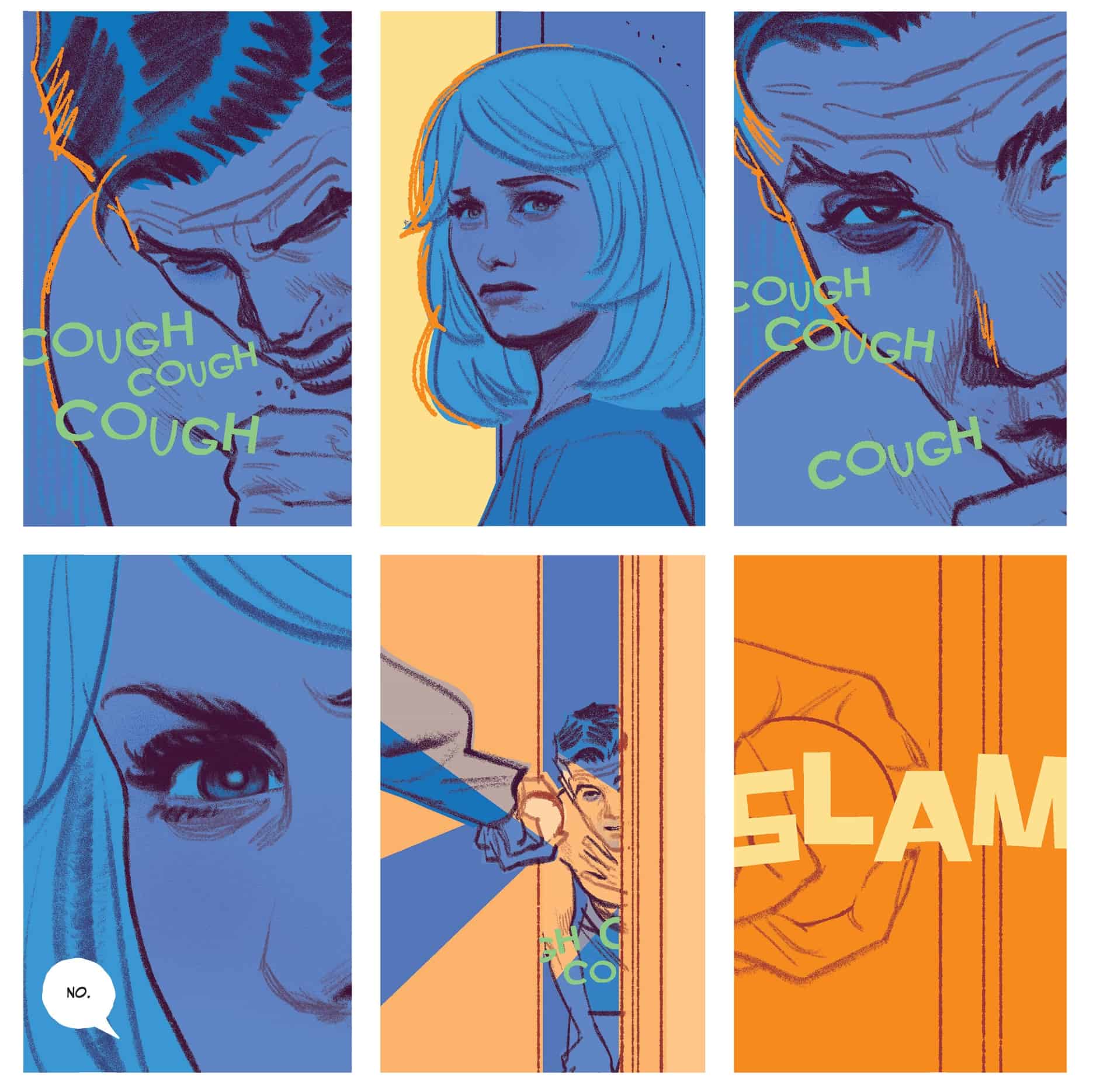 Smallwood’s colors also play a big role in moments where there seems to be an emphasis placed on them. During the fight with ice, there’s a nice shade of blue which can be seen as symbolizing the chilly nature of their relationship during the argument, but there are also streaks of yellow from the early morning sun that seem to shine mostly on Ice. This could be taken as her being a bit afraid of what she’ll find out if they do go and question Fire – or that she’s afraid that Chance might discover that she’s in on the whole thing as well, but that’s my own speculation of how the story will play out.

Clayton Cowles’ lettering is possibly some of the best I’ve seen in comics with this series. There’s just something about the way that he does it that reminds me so much of 70s spy thrillers, despite that not being the tone at all. Because the thought boxes and word balloons don’t have any borders, they blend very nicely with Smallwood’s almost chalk-like art. They also look very aesthetically pleasing as they blend in nicely with the gutters of the book when they’re placed near the edges of panels. They also take up the perfect amount of space, leaving just enough to allow background elements to draw the eye. 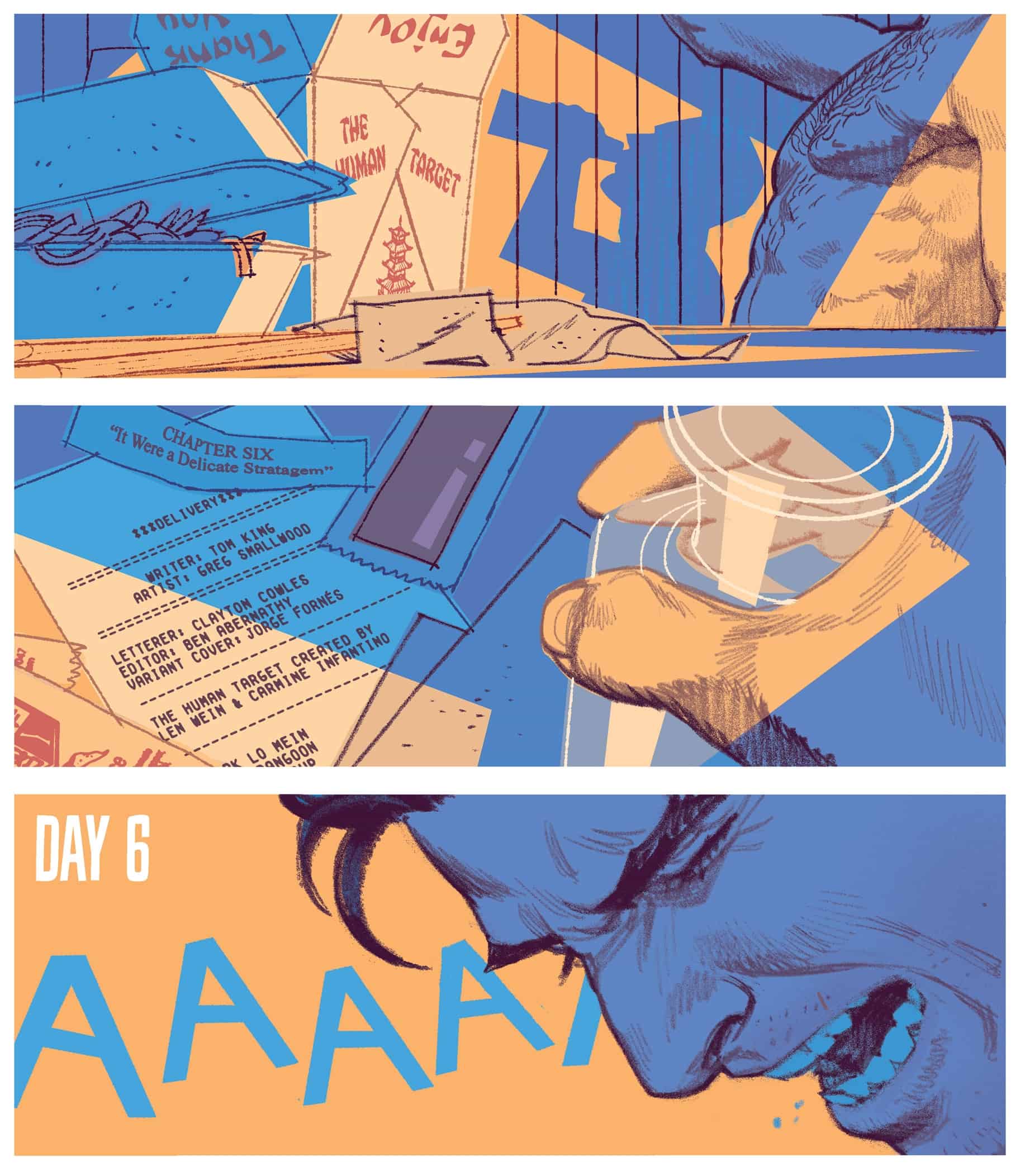 His sound effects are just the chef’s kiss as well! I’m a very big fan of well done sound effects in comics and Cowles does a great job with them here. Sharing the same borderless design as the word balloons and thought bubbles, each of them are fairly unique in that they’re very noticeable despite being very infrequent. When Chance coughs and we see the word written on the page, we’re constantly given the reminder of the looming clock over Christopher’s head. When Chance is chuckling to Mid-Nite we can tell that his “HAs” are real because of how they’re outwardly expressed as opposed to being narrated about. And finally, the WHUNK of a weapon hitting chance in a later sequence of the book feels heavy because it serves as the outline of the panel.

Also, a round of applause for the credits gag at the beginning of this issue with King, Smallwood, Cowles and everyone else involved with this book being named on a receipt for the previous night’s takeout.

Smallwood, King and Cowles are making one of the best noir thrillers of the year. Though the series will be taking a break for a while, I can’t wait for its inevitable return and the fallout that this issue itself will bring!