Self-doubt, muggers and a Hulk are the order of the day. We learn more about Domino’s mysterious adversaries as things go from bad to better to worse for our favorite mutant mercenary… 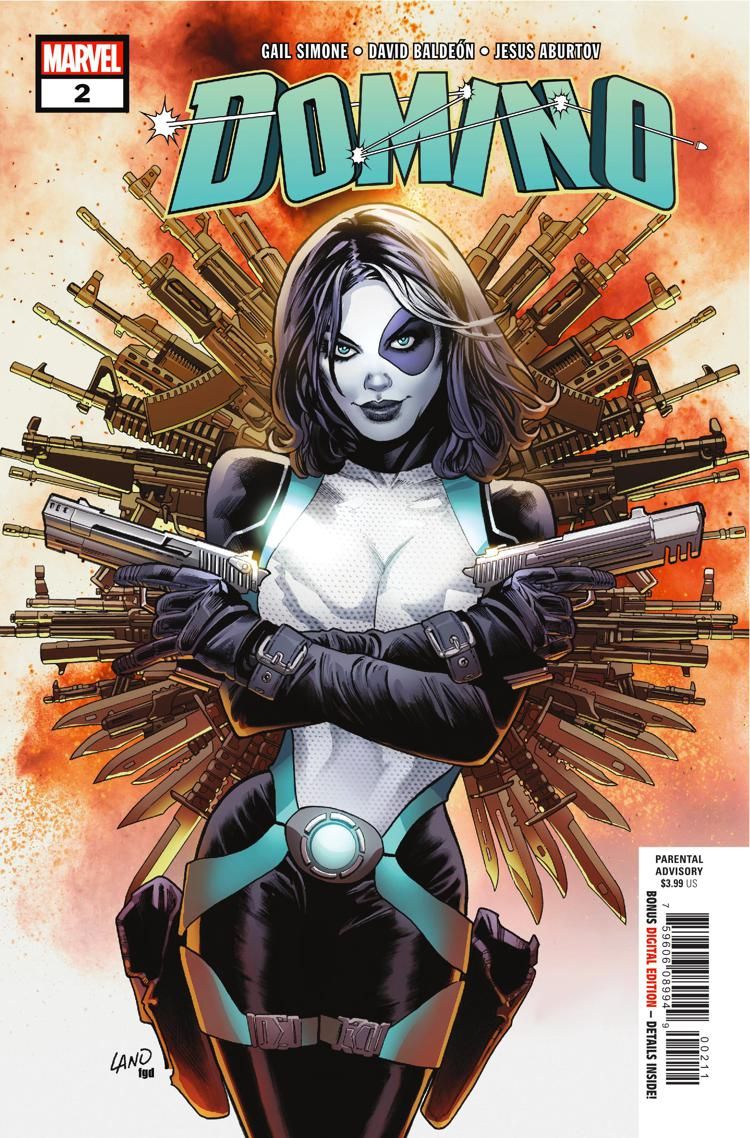 Being thrown through a window can probably be chalked up to being an occupational hazard if you a mutant, a mercenary or in Domino’s case both but being thrown out of the window, in your underwear (pretty underwear but still), of your own apartment by a really mean looking and dangerous lady named Topaz on the orders of a mysterious old man you don’t know on your birthday well that’s just plain unlucky… not something Neena Thurman is used to at all!

Domino plummets earthward in a panic as she can’t “Feel” her luck gift working and we learn that Topaz has the power to take away Neena’s gift. The mysterious old man orders Topaz to give Domino her gift back. Topaz does this after maliciously waiting for Neena to fall a little further. Her ability working for her again Domino is rescued from becoming street pizza (in front of a pizzeria no less) in the nick of time by none other than your friendly neighborhood Spider-Man.

Back in the apartment Domino’s attackers are confronted by her friends and birthday guests who are about to make mincemeat out of the unknown interlopers (there is a two panel moment of perfection at this point as Deadpool lets the villains know they have made a BIG mistake) but the old man appears unfazed as he reveals that Topaz cannot only take away powers temporarily she can also ramp them up and make them uncontrollable.

Meanwhile, up on the roof overlooking San Francisco, Domino and Spider-Man have a brief exchange but ultimately Spidey leaves Neena alone with her thoughts and a horrible gnawing sense of self-doubt which is something the ‘charmed” Domino is not used to feeling.

Back down in the apartment, the old man begins to reverse age in front of the heroes and guests but before anyone in attendance can hand him and Topaz the beating they deserve, or even detain them, they vanish in a ball of blue teleportation energy which comes with its own unique sound: BOMF  and the confrontation ends before its even begun with Wade making a very in character off-color remark about bloodlust and soap on a rope (thank you, Gail Simone)

Outlaw and Diamondback come up to the roof to find a shaken and contemplative Neena. They discuss what is really bothering her and while Neena tells them she doesn’t want any of the guests to see her afraid. In reality, it’s because she is afraid of something bad happening to these two women who are more to her than just teammates, they are her friends but even worse a dark thought begins forming. They head back down to the cleared apartment where Deadpool is waiting for her with Pip having refused to leave until he has made sure the Neena I mean the “dog” is ok… Wade you big softie.

The next day in Golden Gate Park jogging with Amadeus Cho (who is clearly not a fitness fanatic in his human form) Neena wants to know if the Nanites that give him the ability to become a Hulk can stop Topaz and the unknown man from taking her powers again. Cho responds in the negative but before the conversation can continue they are confronted by muggers. Without going into too much detail lets just say they picked a bad day to mess with Neena who’s conscious need to banish the previous evenings feeling of helplessness leads to them all getting a solid beating and someone loses a finger. David Baldeon’s paneling here is excellent and the dynamic motion of the confrontation is well conveyed over what are my favorite two pages of the issue.

With the confrontation over Domino and Cho pick up on their conversation and Neena expresses in words the dark thought that formed earlier: that only the three of them (herself, Outlaw and Diamond Back) and the buyer (who she checked out) knew about the job in the hills where they were ambushed (see Domino issue #1) and that she wants him along on their next gig that evening as back up just in case.

Jump to the evening on a small high-speed boat on the Mississippi with Domino, Outlaw, Diamond Back as well as Adelbert heading toward a large old style riverboat and their next job. Neena’s internal monologue again keys us into the fact that she hates that she is suspicious of the two woman she cares about and she hates that the unknown man and Topaz have made her think that way…me I was more concerned about why Diamond Back has a champagne glass in her hand and is drinking before a job. They are met on board by the client who wants to be called the Admiral. He has hired the mercenary team because he believes there will be trouble on the boat which it turns out is a gambling establishment.

As Domino wonders amongst the tables and slots ( those slots made me laugh ) more and more people begin to win… at everything and Neena realizes her luck power is amped up and out of control just in time for all hell to break loose. Turns out it is an inside job as hidden weapons emerge from concealment under tables. The Robbers grab the Admiral and head for the door. Neena goes after them but not before ordering the team and Cho that there is to be no “collateral damage” Cho transforms into the Hulk and destroys a roulette table by way of an answer.

Outside Domino confronts two of the robbers who have the Admiral hostage and quickly realizes that she’s dealing with the worst kind of complete amateurs and that she can’t rely on her powers to help her out in the situation. So she does the next best thing she relies on the training and experience that make her so good at her job which leads to an acrobatic maneuver and two shot robbers on the ground in front of her.

Later with the job over, as they are disembarking onto the speedboat to leave with Cho apologizing for destroying everything inside. Neena tells the team they have been given the boat as payment and she needs to go get the pink slip for it. Suddenly Domino is once again confronted by the now much younger looking unknown man and Topaz. He reveals that he and Domino are somehow linked and that he has suffered because she has led such a charmed life but that he is now able to reverse the process and that for every bad thing that happens to her he regains some of the life he has lost to her. Domino takes this to mean that he wants to kill her which the unknown man reveals is not his intent as he and Topaz teleport away. She is not the target her friends are as there is an explosion!!!

Domino’s luck ability may be on the fritz because of Topaz and the unknown man but readers luck is at an all-time high with this book! Everything is working in this title from start to finish. Gail Simone’s digging into Domino’s emotions fleshes Neena into a fully realized and three-dimensional character. There is well-balanced and character appropriate humor in the issue. Between Baldeons art and Aburtov’s colors, readers are really treated to an excellent visual with the first page drawing you in and not letting go till the last… this issue is everything a great comic ought to be.

Beautifully drawn, well written with a great balance of humor, heart, and action. Second books of new series can often be a let down after the run-up to the first issue. That is definitely not the case here at all.

The pace of the book won’t be for everyone even though personally I loved it. I am not looking forward to another 30 days of cold turkey for the next chapter, I barely made it waiting for this issue…

Domino #2 continues to be a fantastic read with excellent art from Baldéon and Aburtov and exceptional writing from Gail Simone. This is a creative team who clearly loves the characters and are having immense fun with this book and that comes right off every page. Domino #2 does well to maintain the high standard coming from the majority of mutant-related books coming from Marvel at the moment