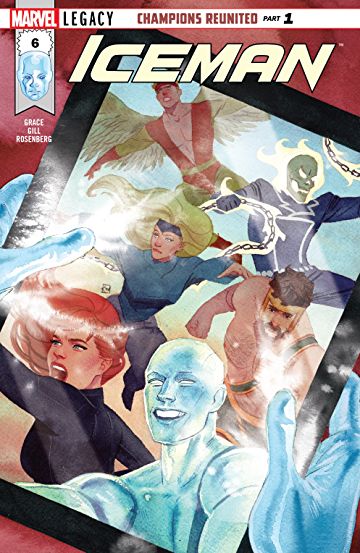 CHAMPION’S REUNITED: Part 1: To commemorate the death of former teammate and friend, the Black Widow (see Secret Empire #7), the original Champions reunite in Los Angeles, California. And just in time! Seems Bobby might need some help with a first date AND an attack by Sentinels!

What you’ll find out: In Los Angeles, Iceman Bobby Drake is ranting to his old teammates Angel, Johnny Blaze, and Hercules because their old Champions HQ is now a public gym. He was hoping to be able to do shots on the rooftop in honor of Natasha, but it just isn’t the same. However, we find out where he keeps his chilled flask (>gasp<)! Johnny takes them to a local bar. 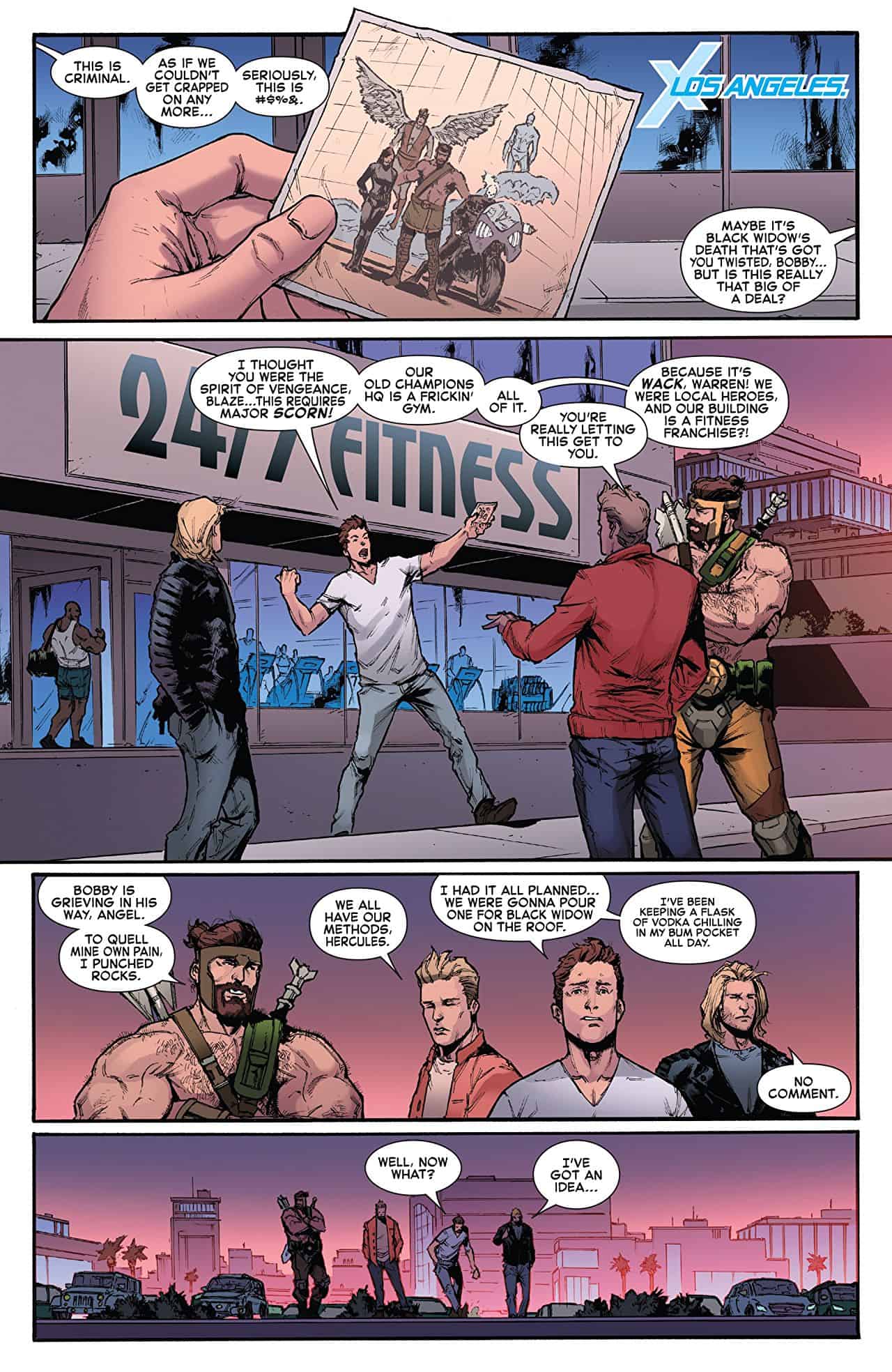 A few hours later, and through some hilarious dialogue, the gentlemen take turns recalling their first encounter with Black Widow. Hercules can’t remember when he first met her, yet fondly remembers the Champions first battle. Angel recalls seeing her from a distance with daredevil as he flew above the rooftops across town. Johnny Blaze is vague with his recollection, referring to their time in the Champions together as when he got to know her. Bobby recoils when it’s his turn and decides not to say, due to embarrassment. Just as it seems as if Warren figures out what it is, Darkstar walks in, running late and quite irritable. Beginning a rant of her own, her friends simply let her blow off steam, as they each have been dealing with the heartache of losing a dear friend in their own way.
Later that evening, while hanging out with Warren (his oldest friend of the group) at the Hollywood sign, they spot a large Sentinel head in the backyard of a residential area. A young woman appears discouraged while tinkering with it. When Iceman and Angel arrive she mistakes Iceman for the Silver Surfer. Humor aside, the woman seems more concerned with showing the heroes off to her daughter than listening to why she should stop working on the robot. Bobby gives her little choice by piercing it with giant ice spears. She swears it’s just a movie prop, but is angered by its destruction and grumbles to herself as Bobby and Warren take their leave.
The next morning, Bobby decides to do some soul searching after texting with Kitty Pryde and heads over to a bookstore to purchase reading material about coming out. While waiting in line outside a shoe store, Bobby meets Judah, who notices the book Bobby is reading (“Born This Gay”) and decides to strike up a conversation. He’s flirting with Bobby, who flirts back in his own naive way. Judah invites Bobby out for drinks later that evening. He is meeting friends in West Hollywood. Bobby accepts, warning that all his friends are superheroes.

In a warehouse in The Valley, we find the Leti, the woman with the Sentinel head, surrounded by Sentinel parts, with another woman named Daisy. They are trying to get a special effects studio up and running and decide to get noticed by having actual X-Men battle their “Sentinel”. Although she says she sculpted the head, it’s clear that these spare parts were acquired by other means. 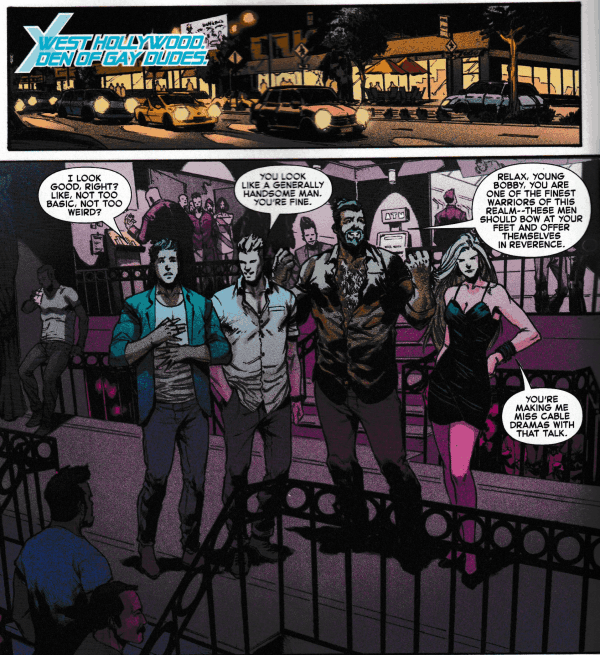 Later, in West Hollywood, Bobby and the other Champions arrive at the club to meet Judah who immediately grabs Bobby and takes him to the dance floor. They dance and flirt, then Bobby finally has his first gay kiss. He’s enjoying himself and seems happy, as Judah invites him back to his place to get to know each other better. As X-Men luck would have it, a group of Sentinels appears nearby, stomping on a car, as Leti records the footage on her phone. As the robots begin attacking civilians, Iceman saves them.Leti begins shouting rhetoric at Iceman, who humorously introduces the Champions with a borrowed catchphrase. 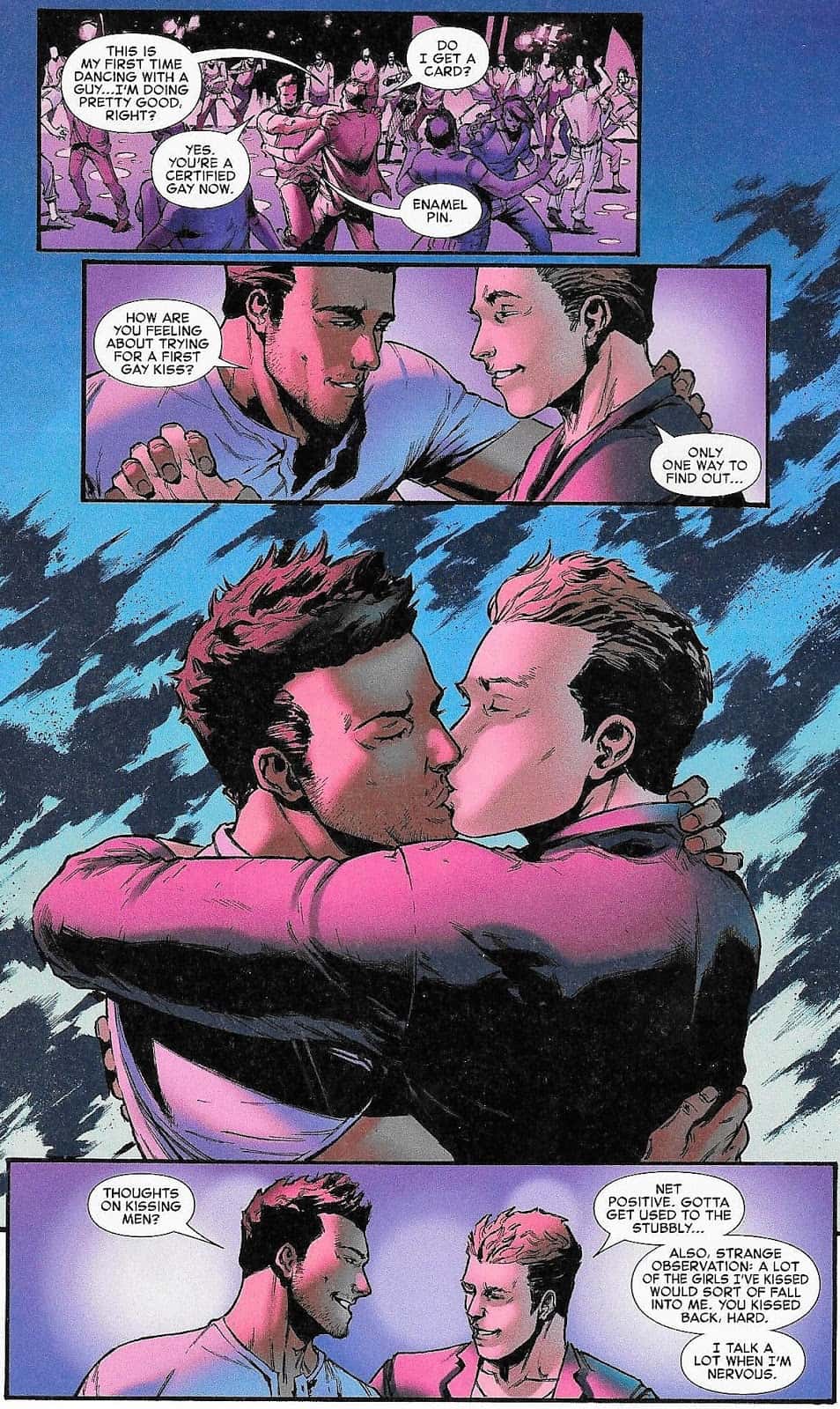 What worked for me and what didn’t: As somber as the reason for the Champions reunion is, this issue is a delight. It’s got a few firsts; Iceman’s first gay date and first gay kiss, and it also shows Bobby a lot more relaxed with himself and genuinely happy for the first time in ages. Wise-cracking aside, it’s common for someone who is the eternal jokester to use humor as a shield for underlying stress. This plays out very well for the character and explains quite a lot in terms of his behavior over the years. The dialogue in the bar is fantastic and funny. Each character is given some insight and screentime, and it’s all very familiar to anyone who has lost a friend. Each person is reacting differently to Natasha’s passing yet, in the end, just being with one another is consolation enough. Having experienced many coming out stories myself, the scenes with Bobby meeting Judah are very well written. It will be interesting to see what Bobby’s parents think of their son’s new Jewish boyfriend! It’s long overdue that we see a gay character simply living his life (even as crazy a life as that of a superhero) and the series is introducing those elements quite successfully. I’m curious where Leti and her crew found all the Sentinel parts and got them to work. In one scene we see Sentinel body parts scattered around the warehouse, then shortly after, we see about a half-dozen Sentinels descending from the air, ready to attack! Hopefully, there’s a lot more to her story. Once again, Sina Grace delivers. I never thought I would enjoy an Iceman comic as much as I am enjoying this series.
Robert Gill does a nice job on art this issue and I wouldn’t mind seeing him regularly on the title.
This issue is a part of Marvel’s LEGACY branding and contains a 3-page backup feature, depicting Iceman’s beginnings up to now. It is written by Robbie Thompson, with pencils by Edgar Salazar, and colors by Rachelle Rosenberg.

Final thought: Iceman #6, CHAMPIONS REUNITED: PART 1 is a humorous and touching read that leaves you wanting more in the best way.