Iceman’s first date with Judah gets sidelined when a group of ersatz Sentinels begins attacking people! Thankfully, his friends in the Champions are there to lend a hand! 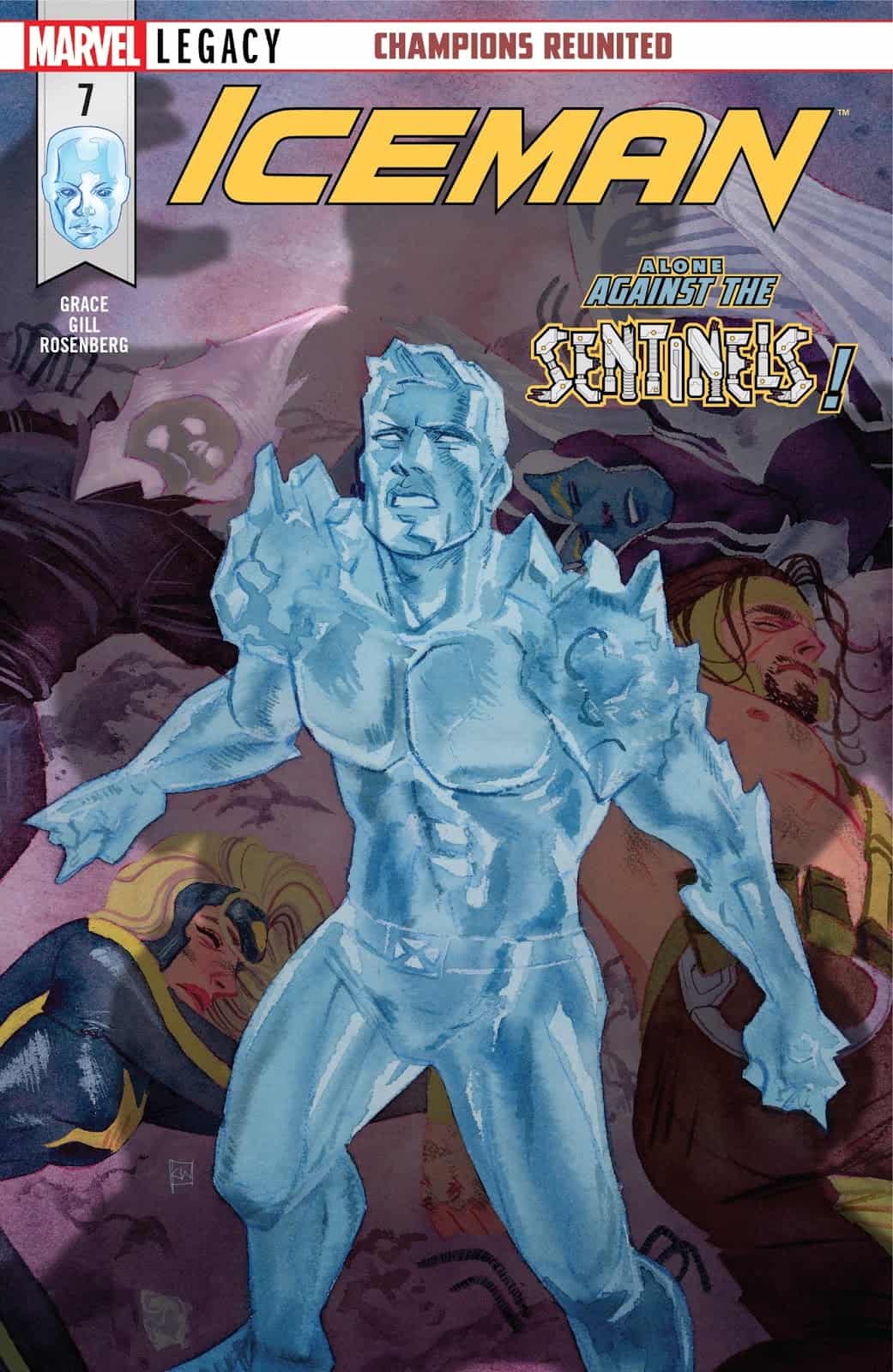 While reuniting with his former teammates in The Champions to commemorate their fallen comrade, the Black Widow, Iceman, Bobby Drake has met a new friend; Judah. After Bobby accepts his invitation to go out on a date (with Bobby asking his Champion friends to come along as back up), they meet at a West Hollywood nightclub. While dancing, the two new friends give in to their mutual attraction and kiss. Back at Judah’s apartment, Bobby hears screams and sees Sentinels attacking people outside, cutting their date short. As Iceman confronts Leti, the creator of these giant robots, the other Champions arrive to help.

What you’ll find out:

The Champions are all holding their own against the Sentinels, but with so many innocent people in danger, the threat level is always heightened. Case in point, when building debris begins flying towards Judah, Iceman has to act swiftly to save him. Stopping the piece of a neon sign from crushing Judah with his powers, he reassures Judah with a peck on the cheek.

After sending Judah to safety down the street, Iceman asks Angel and Darkstar to cover him as he surrounds the Sentinels with an ice bridge, all the while forming a giant ice-monster. With a meta reference to Japanese Film Company, Toho, Iceman’s “monster” alone quickly defeats the Sentinels, to which Bobby utters a phrase that has become a part of the gay lexicon. 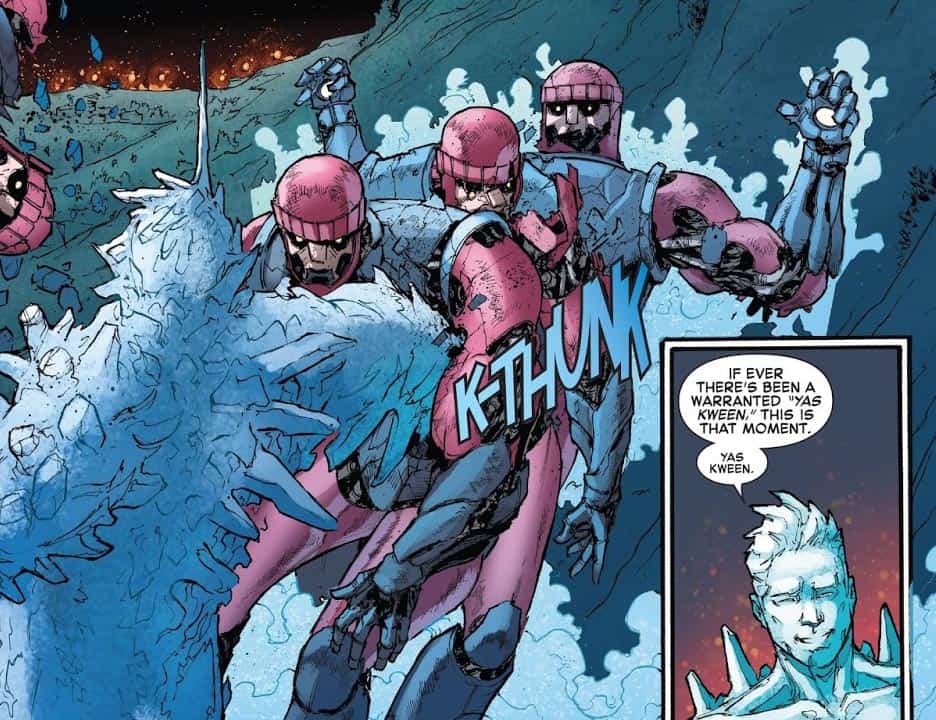 A frustrated Leti decides to leave the scene while Iceman and the other Champions regroup. Hercules compliments Bobby with a hug and a compliment, to which Judah runs in, tongue-in-cheek, saying, “Outta my way! That’s my date over there!”

Offering his gratitude to Bobby, Judah suggests starting their date over. Walking back to Judah’s after getting frozen yogurt, Judah continues his “sociology lesson” for Bobby by instructing him that he needs to learn dating basics, like Netflix and chilling on a comfy couch. Again, they share a tender moment. 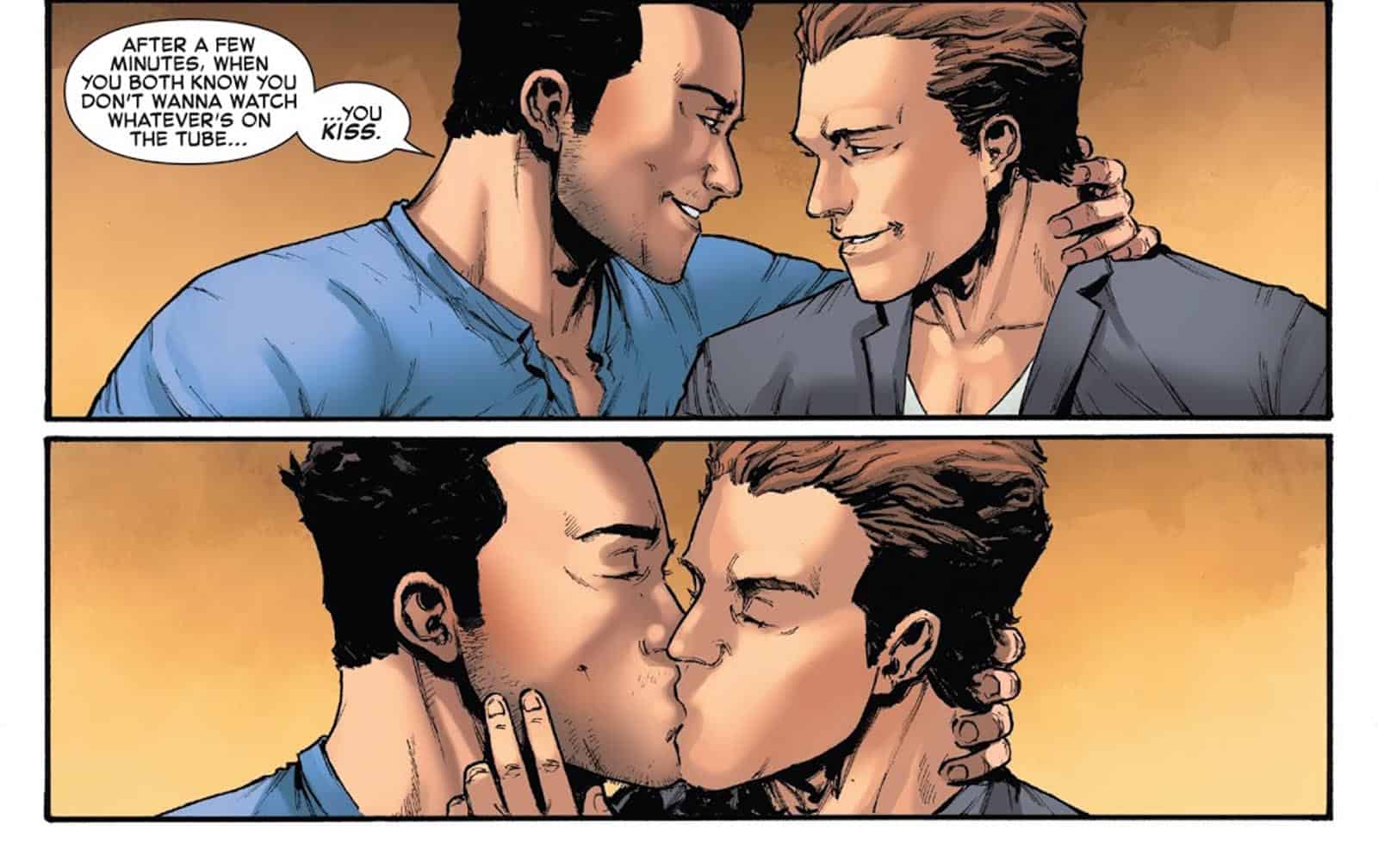 The next morning, Bobby meets up with his friends for breakfast. They begin pressuring him for the scoop. Deciding to keep his experience to himself, since he is still processing his new love life. He offers though, something very personal to him. He tells them in detail, about the first time he met Natasha, the Black Widow. In his recollection, he delivers a tacky pick-up line to her while defeating a Harpie. Natasha soundly slams his cumbersome advances down with the truth, he’s just a scared little boy. Bobby admits to trying to live up to a standard set by his Father, yet realizes it was Natasha who taught him something about himself. ANd with playful chatter, and wise words from Darkstar, a smile of contentment falls across Bobby’s face.
Later, in the Hollywood Hills home of Leti, where these most recent “Sentinels” were built, Iceman drops in, literally. Sensing no malice from the young woman, who is planning on leaving before she’s tracked by police, he offers her assistance with a phone number to a UCLA Professor of Mechanical Engineering. 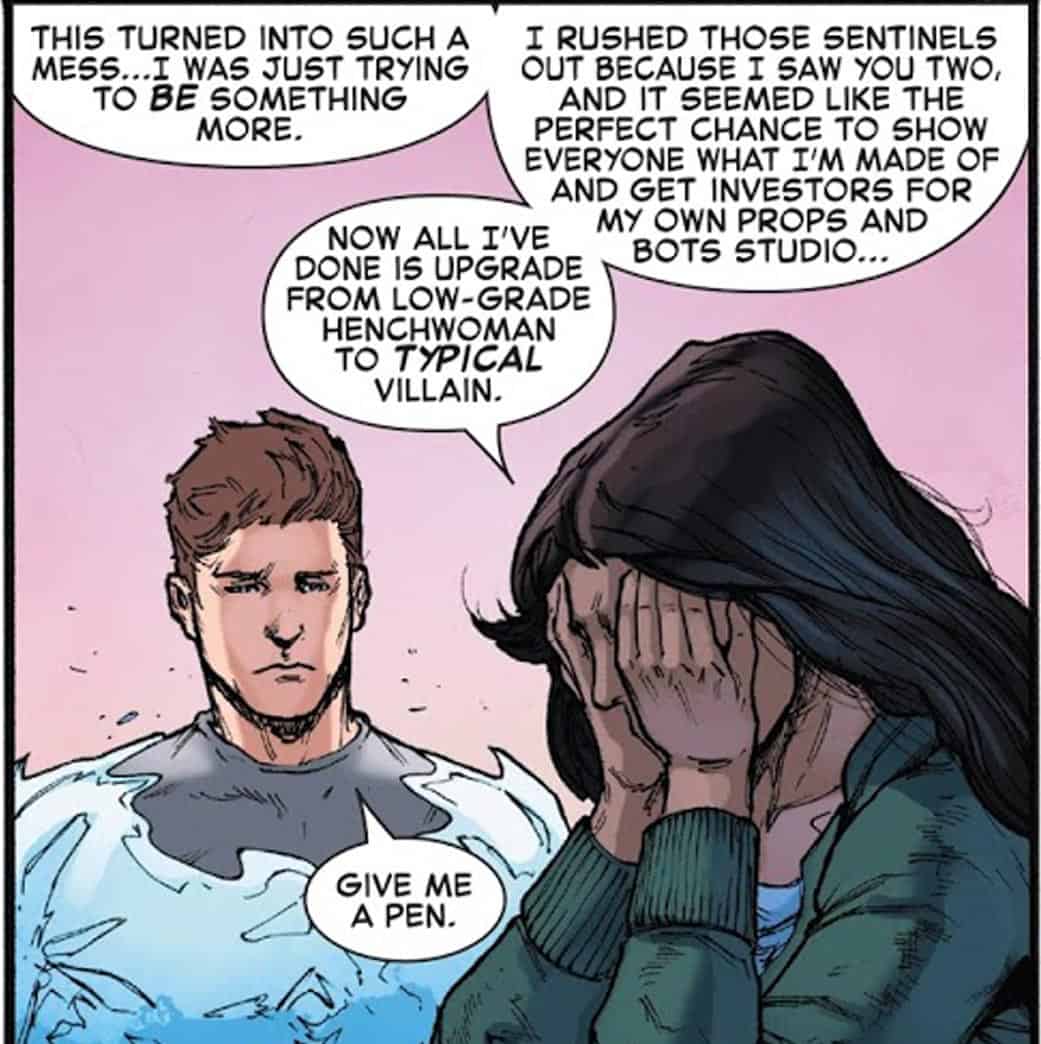 Bobby then meets Judah for one last date, to a location he visited with Warren just recently – atop the Hollywood sign. Judah promises it will be different up there with him. Bobby, with his flare, agrees.
Back in New York at the Xavier Institute, and with some opening lines straight out of Three’s Company, Bobby and Warren discuss the size of his…room, and how small it is. Sensing something going on with his old friend, Warren offers some humor to Bobby.

Later, through a series of texts between him and Judah, we clearly see where Bobby’s attention is, and it’s not in his surroundings at the Institute. Walking into a gathering with the X-Men Gold Team, Jubilee and Quentin Quire to pop some corn and watch a movie, Bobby hears passing (and humorous) conversations amongst his friends. 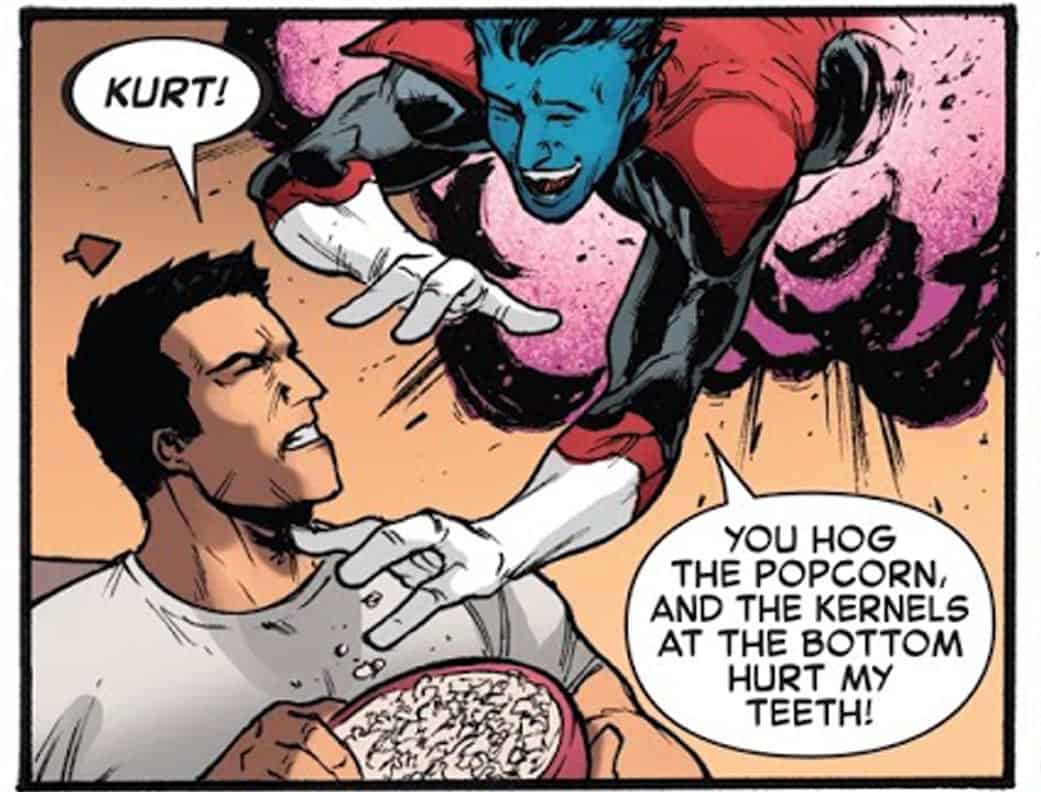 Storm stops him to ask if he is joining them, but he declines, saying he’s got a lot on his mind. Quentin quickly jumps on Bobby’s reply with sarcasm, but then Bobby delivers the mightiest line: HE’S MOVING TO L.A.! 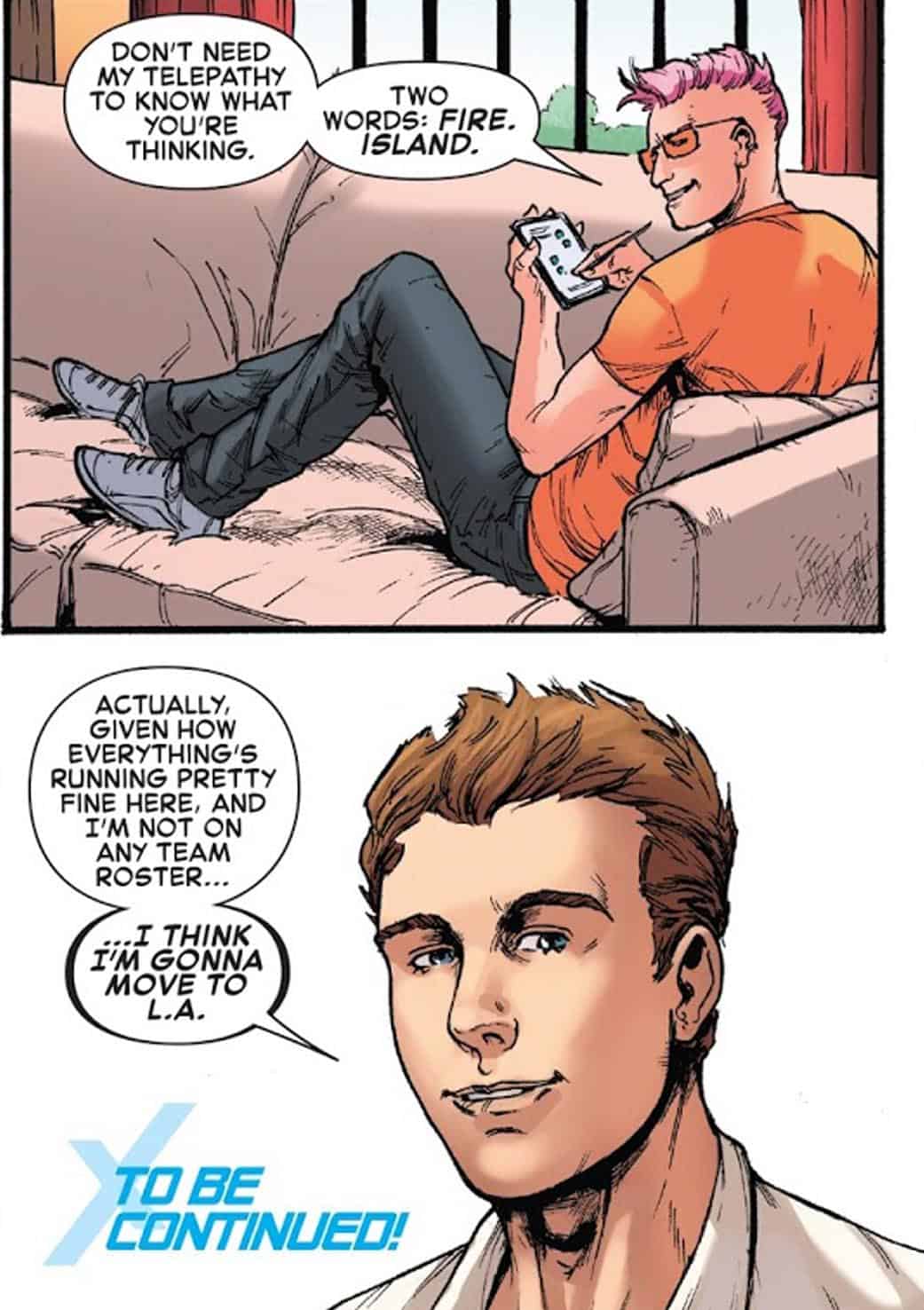 There is a brief scene, early in the issue, that depicts Bobby’s mother, Madeline, making a discovery.

I can’t wait to see how THIS play out!

Sina Grace has put Iceman in a position to become a big favorite of mine. The series has consistently risen higher and higher to the top of my “CWTR” (Can’t Wait To Read) list. He’s fleshing out a character who was always defined by his jokes and “womanizing”, by successfully retaining the wit and humor of the character and by showing not just the hero for what he does, but the hero for who he is. Iceman, as Judah tells him in the story, is one of a kind, even without his powers. He could have punished Leti for her missteps, but he decided to show compassion for her, something Iceman has always had for everyone. The coldest member of the X-Men really has the warmest of hearts. How can Judah not be impressed? I’ve followed the adventures of Iceman for many years, and I’ve never felt as confident for the character, and the direction he goes in, than in the hands of Mr. Grace. I enjoyed seeing this team reunite in honor of Black widow and would love to see them return at some point. Bobby has great leadership potential. 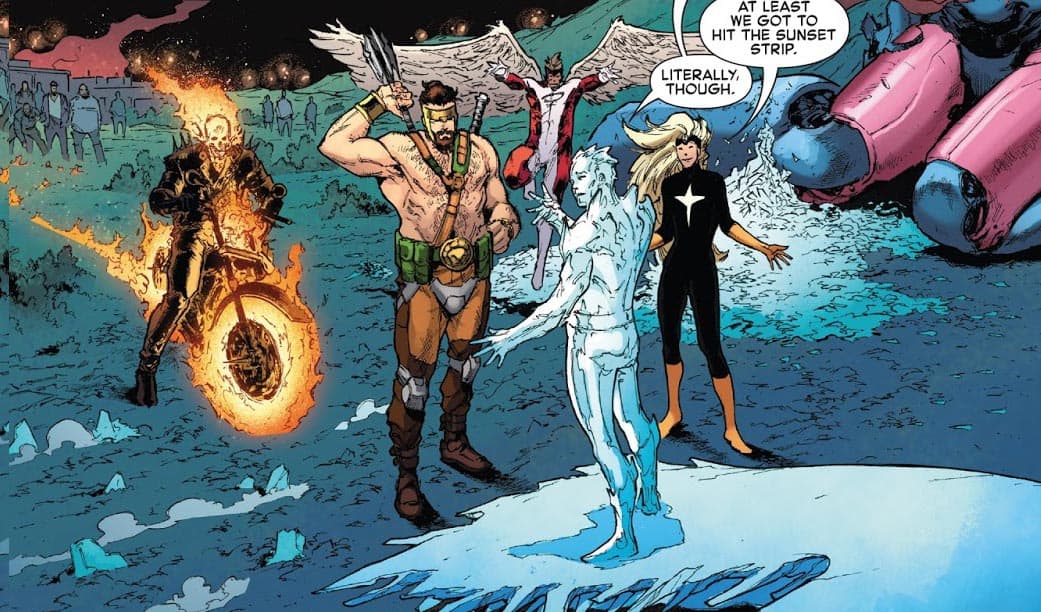 Robert Gill is doing some nice work here and as I’ve stated in a past review, I’ve settled in with his style and the creative fusion with the writer. 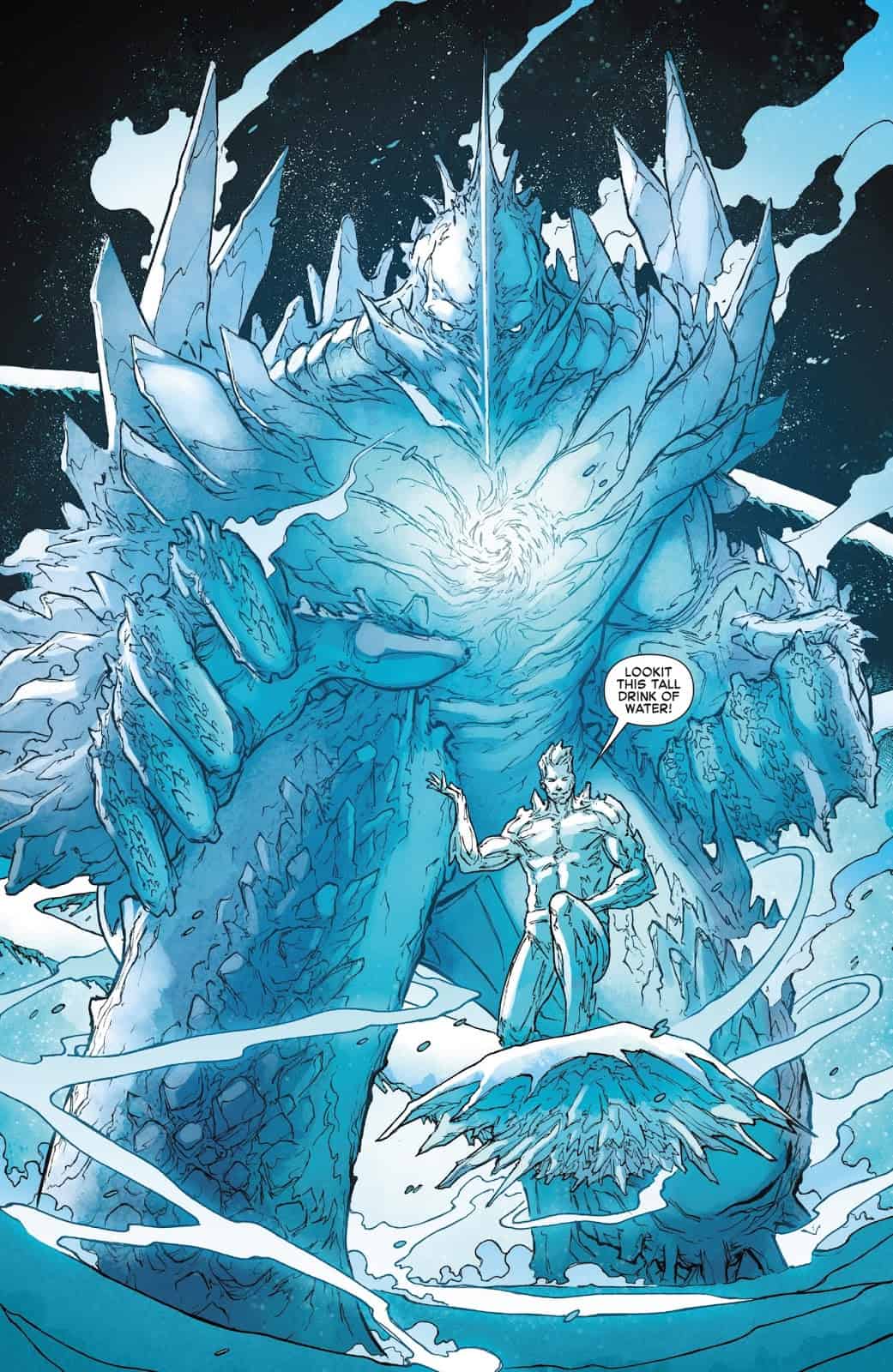 Rating 9/10
Final thought: This Iceman series has shaped up quite nicely to be a wonderful character piece on a hero we knew was so much more. A must-have for X-Men fans old and new.