ICYMI: 20TH CENTURY MEN is a Smart, Detailed Alternate History You Should Be Reading 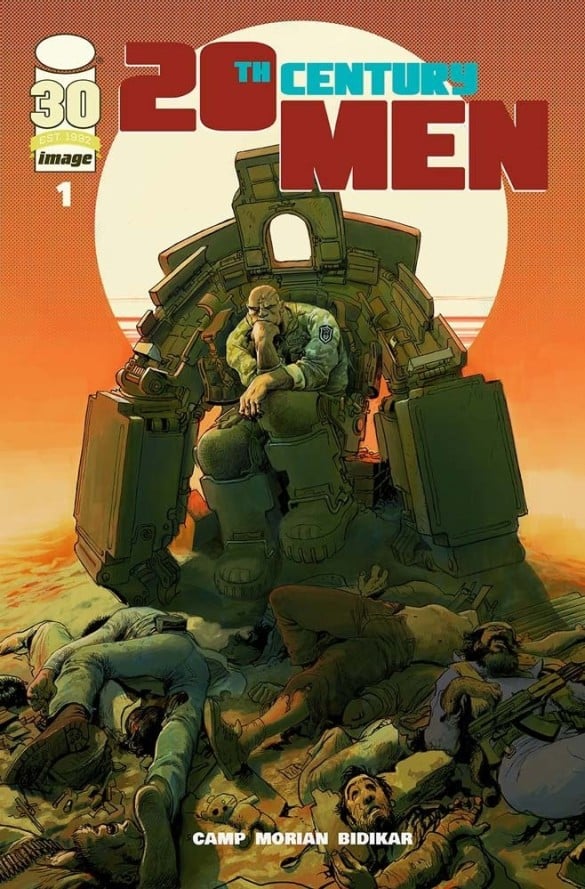 1987: Diplomacy between the USSR and Afghanistan is failing. The President of the waning United States of America is a narcissistic former WWII super soldier.

1967: In Vietnam, a mysterious horror portends a fatal pivot in history.

1948: In Moscow, a young, gifted boy is taken from his mother by the Soviet State. He is a genius beyond all reckoning, and his gifts will alter the course of future history.

Welcome to the world of 20th Century Men.

World-building is a tricky business. Front-load too much detail, and the narrative is bogged down in exposition. Leave too much out, and the reader is left wanting. 20th Century Men #1 by superstar-in-the-making Deniz Camp, artist S. Morian, and letterer Aditya Bidikar – regularly redefining the job on a regular basis – is an exercise in alt-history world-building that doesn’t just work, it immerses the reader in its contours and demands deep, considered contemplation.

What makes 20th Century Men work is that it only tweaks known history a little bit. The USSR is still the USSR, but at least in this first chapter, it’s at least superficially more benevolent than its real-world iteration. In shades of Superman: Red Son, the Soviet system appears to work in this world, bereft of the corruption at the top and “all pigs are equal, but some are more equal than others” inequity that brought down the Iron Curtain in real life. And on the other side of the Cold War, America is weakened, brought low by its own capitalistic urges that have resulted in the election of a vain narcissist who cares nothing for rule of law (sound familiar?). And in the middle is Afghanistan, not wracked by four decades of war, but thriving and potentially leading the world in scientific endeavor.

Leading the Soviets’ efforts is Petar Platonov, the boy genius taken from his mother in 1948. Raised by the State to harness his intellect for the greater good, by 1987 Platonov is scarred, weary, and leads from the front in an Iron Man-esque warsuit. His intellect has brought incredible change to the world, but even his own efforts toward diplomacy in Afghanistan may be undermined by a greedy United States, desperate to reassert itself as a global superpower. Platonov is the symbol that represents the USSR in its superiority to the world, a role he wears with a resignation of someone consigned to his duty whether he wants to be or not. He’s the kind of complex character we don’t see enough of – he’s contemplative, intelligent, and plain-spoken, but also a bastard when he has to be. “When did you decide death was such a beautiful thing?” a fellow scientist asks him upon the reveal of his first-generation warsuit in years past. That simple question reveals a wealth about Platonov: he’s chained to his own sense of obligation, and even though he believes the State’s actions are right, he resents their necessity. It’s brilliantly subtle writing.

As for the rest, the contours of 20th Century Men‘s world are, like I said, not fully revealed in this first issue. Nor should they be. Like other great world-building exercises such as The Wire or Game of Thrones, Camp is a smart enough writer to know that not tipping his hand at the outset is the wisest play. He sprinkles enough breadcrumbs to entice readers to want more. The name of the game is show, not tell – and Camp and his artistic cohorts show us just enough that we are gripped by the realism of this alternate history, and don’t just want to know more, but need to. That’s damn smart writing. Between this, Scout’s Agent of W.O.R.L.D.E., and the upcoming Bloodshot Unleashed from Valiant, you can be certain that big things are in Camp’s future. He’ll be writing Batman within five years. Promise.

As for S. Morian’s art, it’s frankly astonishing. Shifting their style slightly depending on the scene and time period it’s set in, Morian is clearly a talent to keep an eye on. Handling pencils, inks, and colors all at once makes him a triple-threat; that he adds painterly swaths to his colors puts an extra layer on the cake that renders it even more rich and delicious. As for Aditya Bidikar, his work is top-notch as usual. He’s part of a generation of letterers that truly sees the art form as an art form, and an integral part of the process – the lynchpin that marries the art and story. Bidikar approaches lettering with as much intentionality as more widely-recognized artists any day of the week.

In the final analysis, 20th Century Men is an intelligent, thought-provoking, well-crafted comic that simply works. Do not miss it.

20th Century Men is one of the best debuts to come around in awhile. Smart, intentional, and familiar yet different - it's the kind of gem of a comic that is all too rare. Don't sleep on it.

ICYMI: 20TH CENTURY MEN is a Smart, Detailed Alternate History You Should Be Reading