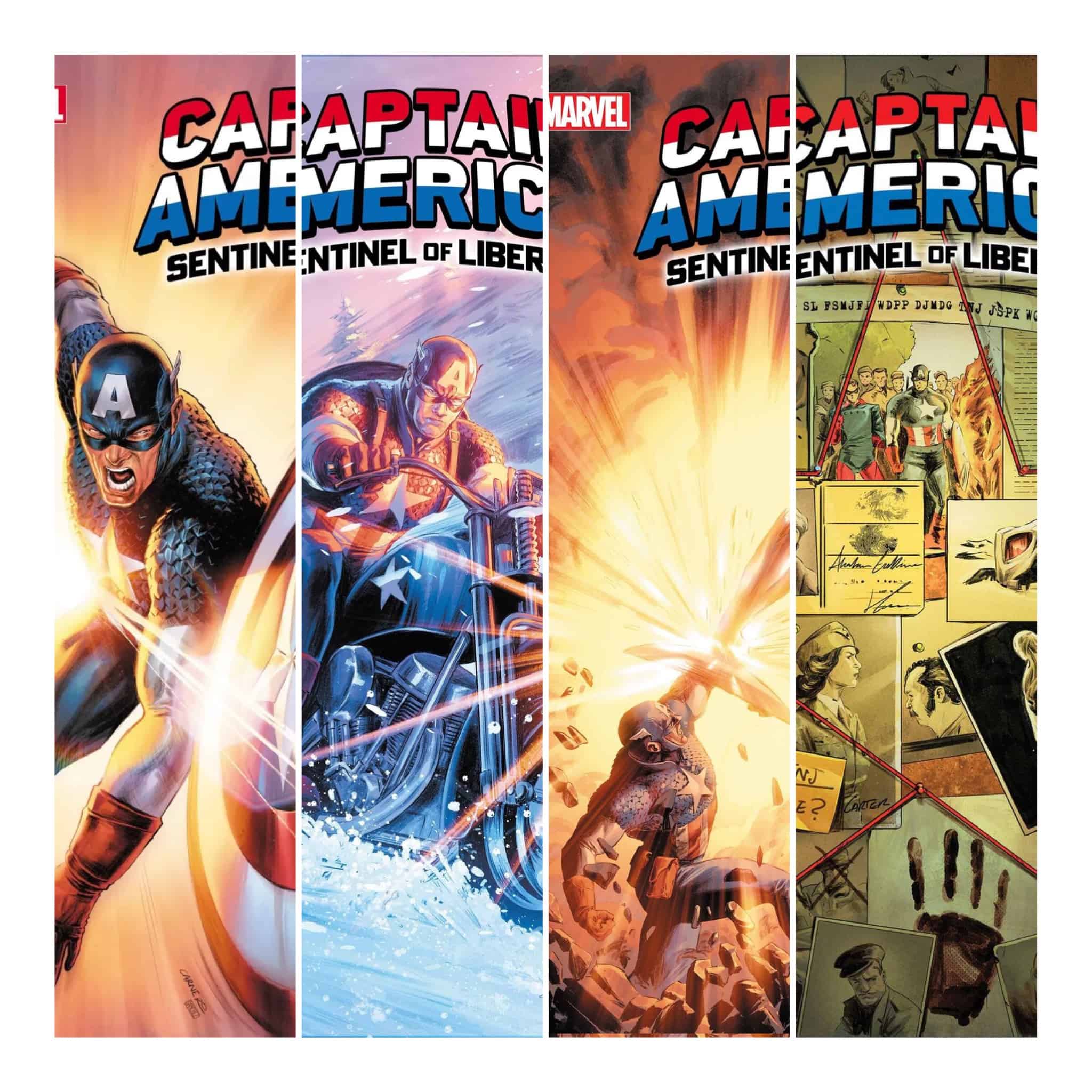 "The shield isn't what you think. It's not your symbol. It's theirs." The shield is one of the most iconic images in the world. It stands for hope, justice and the protection of the innocent. It also holds a secret, undiscovered until now, that will change the way Steve Rogers views the 20th century…and how he chooses to fight in the 21st. Nothing is what it appears in this game-changing Captain America run by Jackson Lanzing and Collin Kelly (KANG THE CONQUEROR) and Stormbreaker Carmen Carnero (MILES MORALES: SPIDER-MAN, CAPTAIN MARVEL, STAR).

After a tumultuous past couple of years, Captain America is back, and he’s ready to be as American as ever. Jackson Lanzig and Collin Kelly are jumping into Cap chainmail first, and dragging Cap and his world into a plot consisting of international political intrigue, untold secrets regarding the origins of his shield coming to light, while also trying to remind Steve, and the readers, about the man who wears the red white and blues. If any of this seems familiar to you, that’s because it is. These are all very familiar themes that we’ve seen within Cap comics over the years, some better than others, but it’s a trope that we’ve seen with Captain America, and Steve Rogers in particular. So without further ado, let’s get on with the show, shall we.

When the series was originally solicited, Marvel made it sound like this was going to be a spiritual story, where the creators focus more on the man behind the shield, than the shield and what it represents, which got a lot of Cap fans in a bit of an uproar, but it’s been a pretty even mix between the two. One thing that’s been an absolute delight thus far is the development of his supporting cast, both previously established, and the brand new. Although I did catch one mistake, Cap did not in fact grow up in Lower Manhattan, but Brooklyn. I’m assuming the realtor told Steve it was in lower Manhattan to get those Manhattan rent prices (do I get a No-Prize?), but I’m really liking the development that this team is giving us thus far.

As I said, Lanzing and Kelly have been developing his older cast, including some of his allies from WWII, like the second Destroyer, and the Winter Soldier, while giving us a brand new Destroyer, or more accurate, an agent for this new group, the Forge, with a young kid being used as their pawn. The new Destroyer is part of this deeper conspiracy, that’s using both terrorist organizations, as well as international peace keeping forces. They’ve even got their hands in everything, even Bucky’s time as a brainwashed assassin for the Russian government has ties to this shadow cabal, so just how deep does this conspiracy run?  What does the younger Peggy Carter have to do with everything? Will the disparate storylines that are running through this book, as well as the Sam led Captain America: Symbol of Truth, line up with each other as we make way for the Cold War event next year? So many unanswered questions.

The team has also introduced a new…cyborg-like threat called the reactive. They look like they’re a lesser advanced version of the Furies from the Captain Britain lore, so could they be involved with the 616’s Jim Jaspers, who was introduced in the now-classic Uncanny X-Men #200. All of these parts, with ties to so many things that aren’t even associated with Captain America makes this threat seem…more meaningful in the greater Marvel universe, while giving some new faces that you wouldn’t associate with these standard Cap stories.

On art duties is Carmen Carnero, and I could not be more elated. Carmen’s been on my radar since her time on Wonder Woman during the James Robinson run, and became one of my favorite new artists after she helped relaunch Captain Marvel with Kelly Thompson. Her style here reminds me of Paul Neary’s run on Cap, with the scribe I most often associate with Cap, Mark Gruenwald, and I’m loving it. Such a treat to read. Hopefully she stays on longer than an arc or two, but we shall see.

It’s a solid enough start to the new Captain America title, using some tried and true tropes, while trying to mix things up. The new supporting cast seems interesting, as they run the gamut of the new with the old, and a welcome sight to some familiar faces. A solid mystery, with some fantastic art hopefully bodes well for this run.