ICYMI! Dejah Thoris vs. John Carter #4: John is the One Who Needs Saving 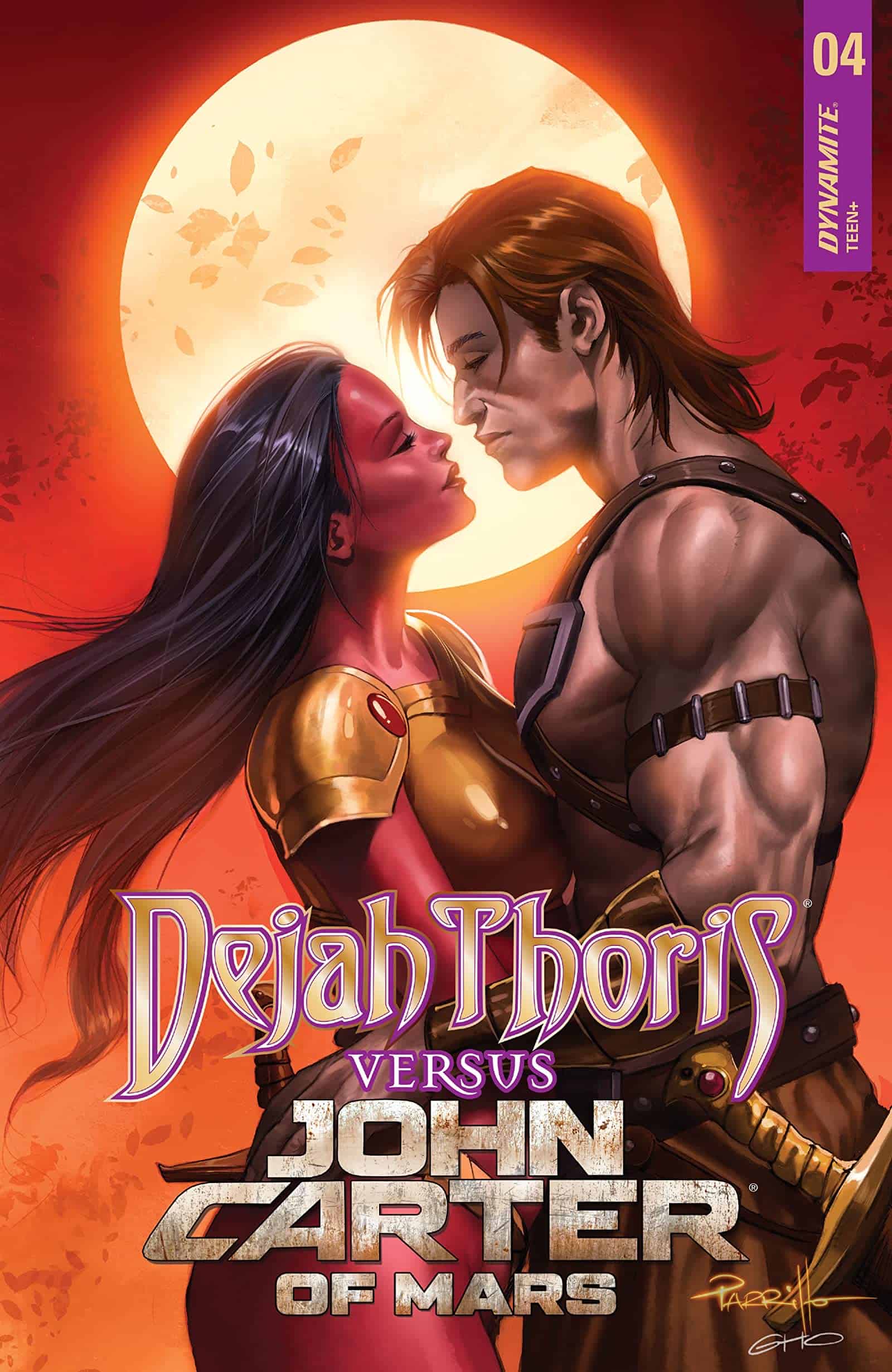 Dejah and John…captured! Whoever gains control of the Earthman’s secrets will rule all of Barsoom…just imagine a clone army of leaping John Carters! Can Dejah access arcanotech in time to receive help, or has she been reunited with her love just in time for their DOOM!?

I absolutely love the primary cover of this issue as well as most issues of Dynamite Comics.  The coloration and drawing provides substance to the piece.   The textures of the hair, skin and clothing really comes out with this coloration.  The sun behind the two lovers actually glows with yellow and heat.  It looks like it is warm and I love the differences of the skin color.  Carter looks white and Dejah looks red, she is truly a red Martian.

The interior art is also detailed.  Both John Carter and Dejah look tired and wounded.  The reader can see the injuries and bruises on John’s face.  Alessandro Miracolo brings out the facial body language.  While John and Dejah speaks, the reader sees the smirk on Dejah’s face when she says that John came to rescue her and that shows his love.  John was brainwashed and used to fight Dejah in the lead up story to this story.  I was not very thrilled that the two characters are naked in these opening scenes.  It is the custom of Mars to not wear a lot of clothes and I am grateful that the scenes are tastefully drawn.  The straps that secure the tow characters are wide and provide adequate cover of the character’s bodies.

The story here is empowering for women despite the lack of clothing. Dejah is shown as very capable.  While John tries to muscle his way to freedom, Dejah who knew she was going to be captured hid a pick under her skin.  While Gall is focusing on John and his experiment on him, he fails to notice that Dejah picks the lock and when Gall leaves she easily frees herself while John struggles, telling him that he is going to hurt himself.

She is also a great warrior.  She is not the weak damsel who needs the strong man to rescue her all the time.  She is able to do her fair share of rescuing for herself.  Dejah Thoris says that you can be beautiful and capable and intelligent, she is a scientist as well, all at the same time.  She is a true renaissance woman and her character is one of the reasons why I love Dynamite Comics.

This story provides mystery and action.  It has a beady eye villain in Gall.  A seemingly unstoppable force that can spell doom.  It has heroes that are flawed but determined to win.

ICYMI! Dejah Thoris vs. John Carter #4: John is the One Who Needs Saving