Johnny Blaze has the perfect life: a wife and two kids, a job at an auto repair shop and a small-town community that supports him… But Johnny isn't doing well. He has nightmares of monsters when he sleeps. And he sees bloody visions when he's awake. This life is beginning to feel like a prison. And there's a spirit in him that's begging to break out! Benjamin Percy and Cory Smith are going back to basics with the Spirit of Vengeance!

When it comes to Johnny Blaze, “Hell to Pay” isn’t just an expression. For if you dare to spill the blood of innocents, Johnny Blaze will be there as a vessel for Ghost Rider — The Spirit of Vengeance.

Before we dive into this review of Benjamin Percy’s first three issues of Ghost Rider, I want to give a quick summary of my relationship with Ghost Rider as a character. A relationship that is pretty much non-existent. My history with Ghost Rider consists of memories long gone of the Nicholas Cage movies, playing the character in Marvel vs Capcom 3 and reading the occasional Danny Ketch issue from the 90s run. As well as a very badass clip from the 90s Fantastic Four cartoon.

So, safe to say that I’m going into this Ghost Rider story with little to no background on the character.

With that said, I’d argue you don’t need much history with the character to enjoy what this run has given us so far. A simple wiki/google search also has confirmed my suspicions that every character but Johnny himself seems to be new and original from this run.

I could sit here and type out ever plot detail and tell you why they work or why they don’t.

I’m going to gush about every detail of this book so far and how its writing and visuals have sent chills up my spine.

Johnny Blaze is a broken man. He’s an alcoholic with a fear of the creature locked inside him. He and the Ghost Rider are no longer fluid, but two solid and separate entities. The yellow line on the road has gone from dashed to solid, as Benjamin Percy put it in issue 2.

An accident left Johnny convinced he was going crazy, as he saw nothing but nightmares and fear whenever he closed his eyes. But I have a sneaking suspicion that this was no accident, despite what our hero thinks. No, someone locked up the Rider and the accident Johnny went through was just a cover.

Who tried to extinguish Ghost Rider? Why would they do this? Well, we don’t know. Nor does Johnny. Nor do the Council of Night Magicians, who so graciously helped to free Ghost Rider from his fleshy prison so he may once again seek vengeance for the innocent.

This book is currently leading us through a mystery. Or, multiple mysteries I suppose. As I mentioned before, there’s the mystery of what happened to Johnny and Ghost Rider. But we also have the mystery of newcomer Talia Warroad. The mystery of exactly the Council of Night Magicians are. What is the Shadow Country? What is real and what is simply the mental machinations of a man posessed?

At the end of each issue so far, I find myself with more questions than answers. While normally I’d find that to be somewhat irksome, it hits like a sugar rush in this book. It just gets me more excited for what’s to come next.

Benjamin Percy is leading us on this dark and gruesome journey paved with death, blood and hellish creatures. His writing is intriguing and at times terrifyingly relatable. It makes you wonder what might be staring back as you look into the abyss of darkness in the corner of your room. 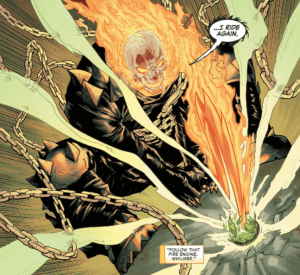 And that feeling is only made even worse by the terrifying work of Cory Smith. His creature design is something to behold. The visuals he creates are terrifying yet enthralling. They make your hairs stand on edge and your forehead sweat. There’s this uncomfortable horror in the art of this book that becomes even more terrifying when Bryan Valenza’s colors are added to the mix. His colors feel cold, even when Ghost Rider is fully flaming. And that’s not cold in a bad way. It’s cold in a shivers up your spine type way.

The art at times looks as if you can almost touch the flesh melting off of Johnny’s body as the Spirit of Vengeance takes hold. It’s horrifying in a way that makes you wonder how art can be so fantastical.

And along with the art and words, this terrifying book is brought to life with the lettering work of Travis Lanham. His speech bubbles for Ghost Rider are surrounded by this black flame that makes you read the words as though they themselves are raging in anger. It brings the demonic side of Johnny Blaze to life in a way that wouldn’t be possible without that added touch. I simply love it.

I can go on and on and on about this book, but in the end, you should pick it up and read it for yourself.

For if not, the Spirit of Vengeance might just come for you.

Ghost Rider issues 1-3 are a fantastic back to basics Ghost Rider story that's welcoming for newcomers. This is a book that if you see it on the stands, you better pick it up. It is terrifically terrifying. A love story to the horror genre that is so deep rooted in Marvel's history.