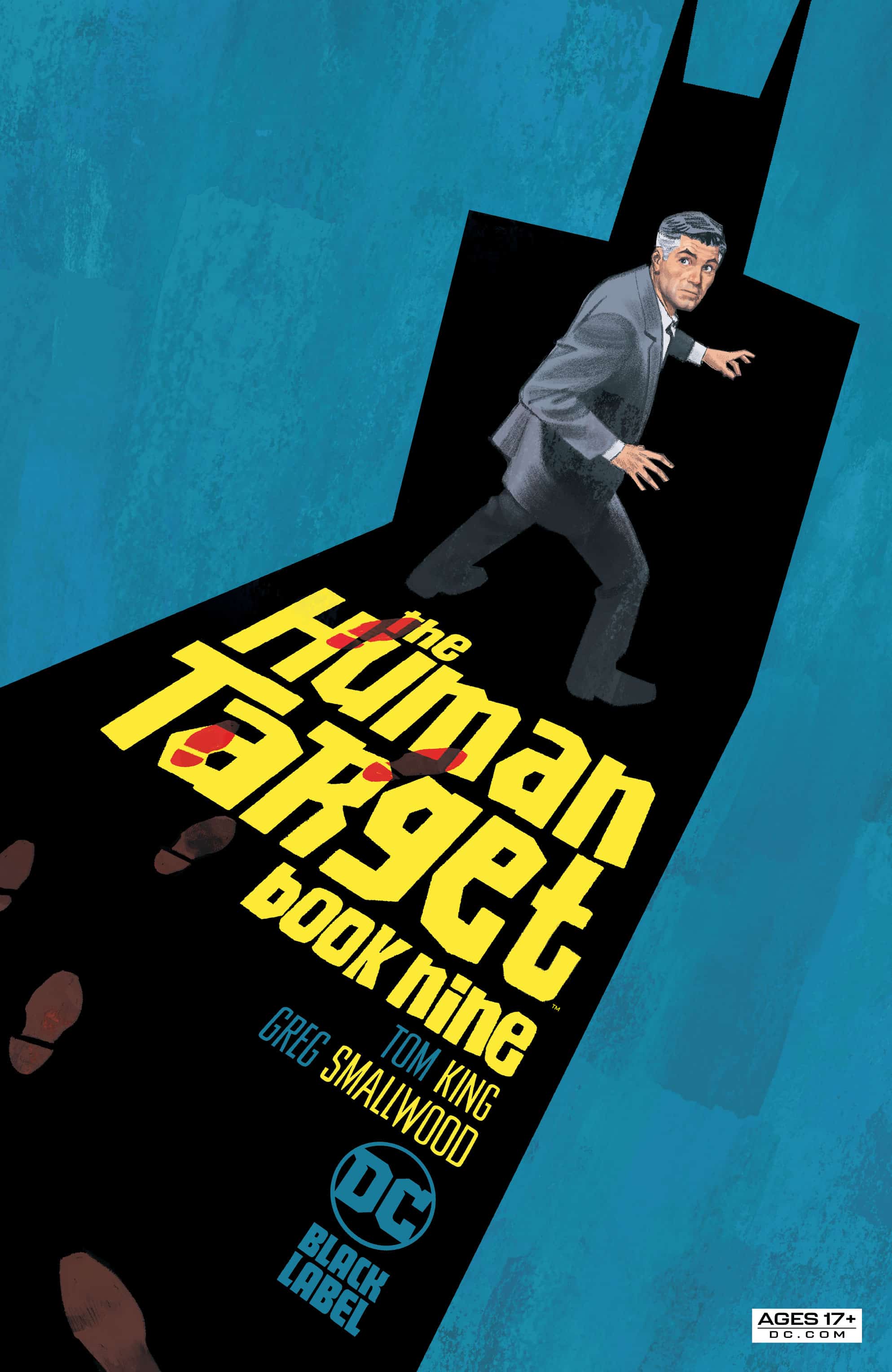 Christopher Chance is a dead man. After ingesting a poison meant for Lex Luthor, the Human Target finds that he only has a few days to live and he decides that he wants to spend that time finding the person that killed him. After a series of revelations and adventures with his new girlfriend Ice, he finds the culprit and decides to try to spend his last few days in peace. But there’s a looming shadow from the JLI that he doesn’t think he can escape from.

Ever since The Human Target returned from its break, it’s been nothing but fantastic. 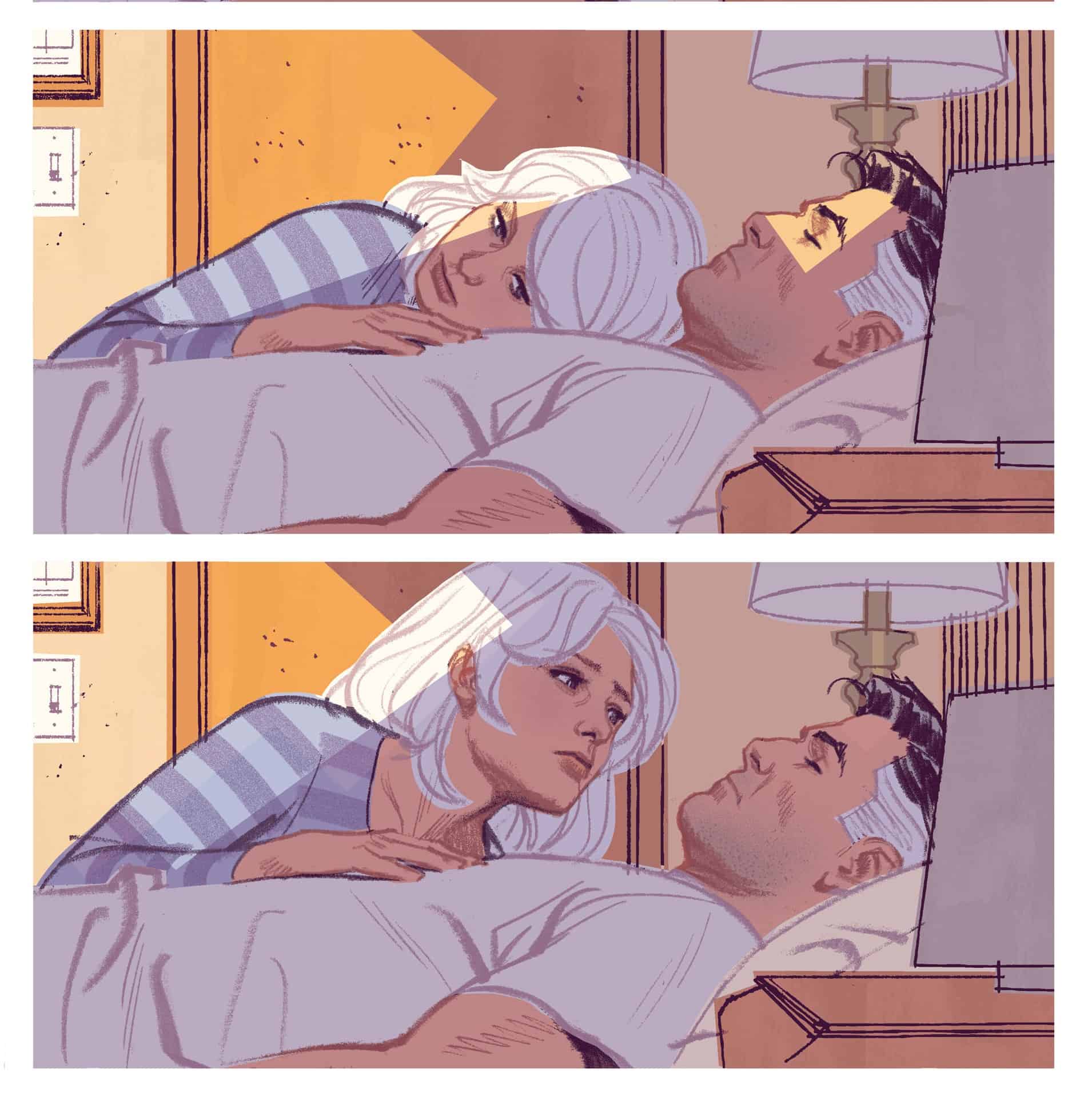 With every single issue, Tom King adds more layers to the noir mystery that he’s creating – even when the “who, how and why” have been solved, there’s still even more even more to be mined from the story. And that’s not even speaking on the excellent characterization that King is able to bring out from both his main star in Christopher Chance, but from Ice as well. This issue in particular focuses on Chance and his paranoid fear that Batman is going to come after him and Ice for the murder of Guy Gardner.

Chance, like the rest of the heroic community, likely views the JLI as a joke home for misfits and C-List heroes that, while capable of doing the job, aren’t necessarily the cream of the crop. Blue Beetle is a genius that thinks too much and hangs out with Booster Gold, Gardner is a brash, loudmouth, Martian Manhunter and Rocket Red could crush Chance in an instant, but he’s already seen through them and Fire just wants to protect Ice. Batman, however, is only on the hunt for justice. 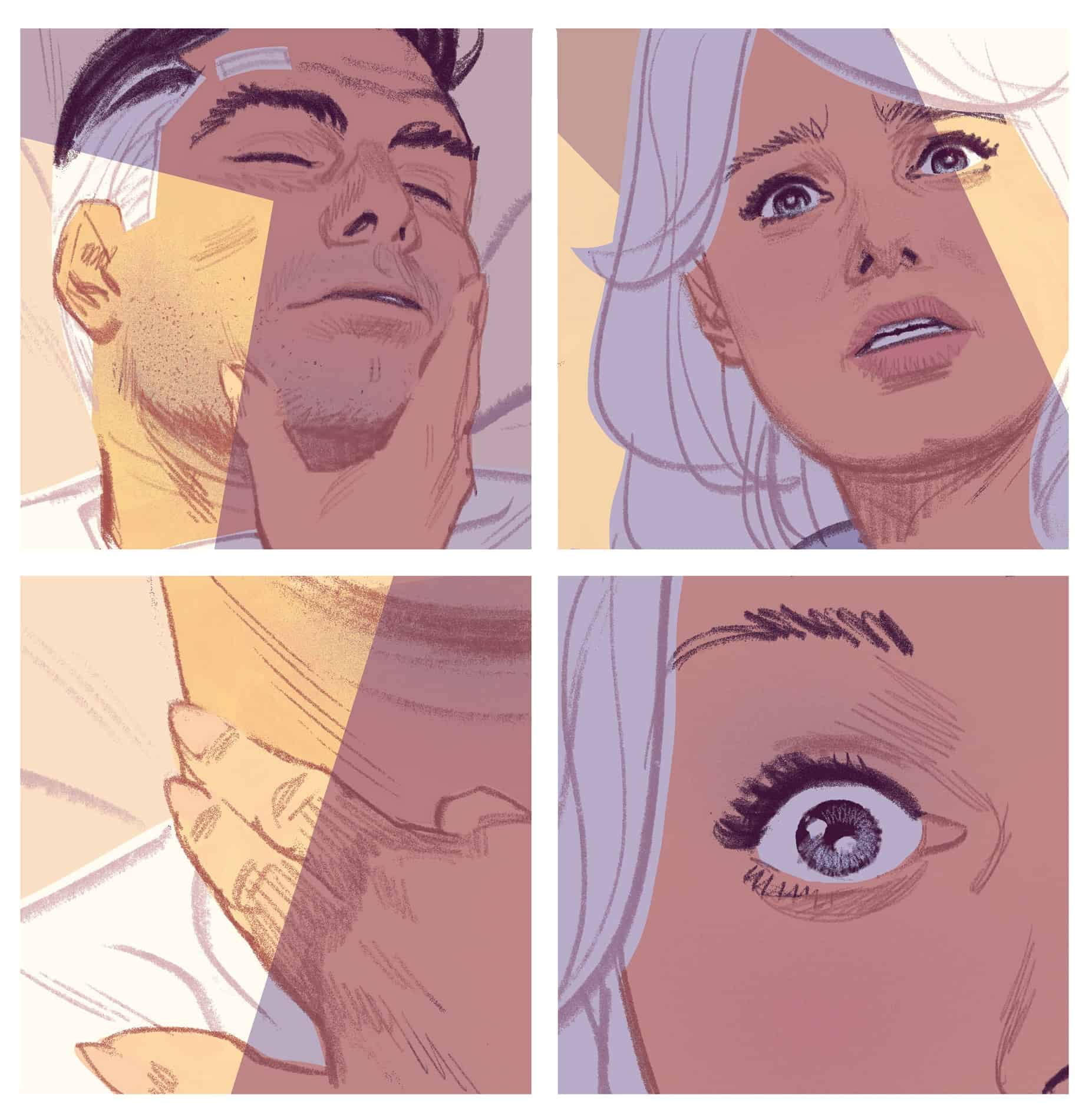 King does a great job of slowing this issue down to emphasize every single paranoid thought that Chance has and his inner back and forth as to what he thinks Batman would do to fake him out. This is an excellent reflection on Chance’s normally calm and cool demeanor that we’ve seen throughout this series as he allows his fear to get to him in every page and panel, even to the point where his normally good deductive reasoning skills are impaired by the same scare tactics that Batman normally employs on every other criminal that he chases, up until the end of the book where he realizes that he’s been afraid for nothing.

Greg Smallwood’s art and coloring are perfect as always.

The initial three pages of the book are almost heart wrenching with Ice waking up to Christopher not breathing. What starts with three panels of concern evolves into six of fear and then nine of pure panic as Tora finds herself unable to resuscitate Chance. Each of her facial expressions in these panels elicits an amazing amount of emotion that reinforces how much she genuinely cares for Chance. This is further shown in later panels of the book where she creates a house of ice, a crystalline, idealized version of 1950s bliss with amazing blue and white coloring contrasting against the sandy yellows of the desert background. 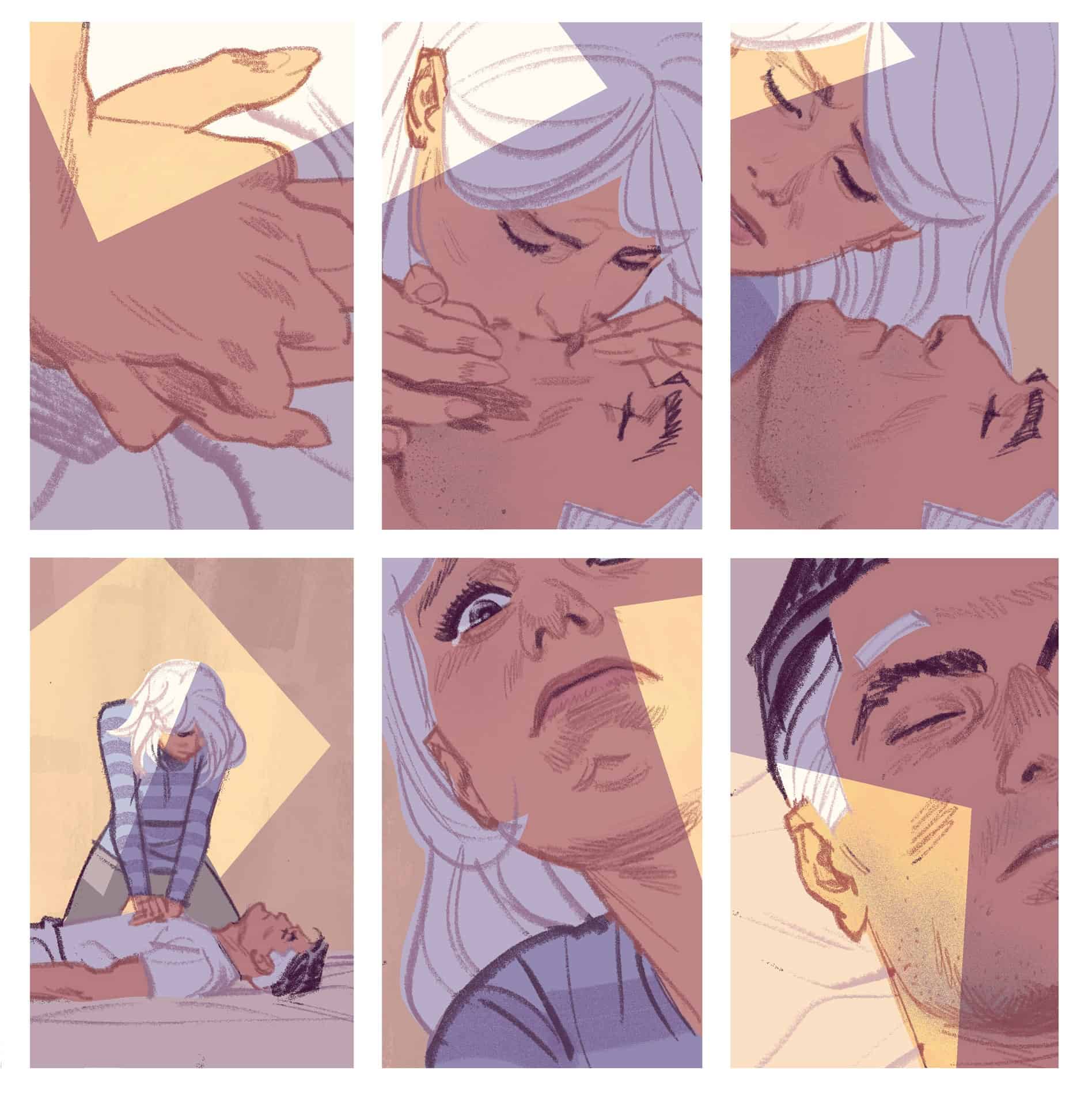 His line are as smooth and nice as they are with each issue. The pencil/chalk-like linework gives the book a nice sense of style that sets it apart from every other book that DC is releasing right now, made even better by his tight panel work. He utilizes extreme close ups to a degree that further highlight the tense nature of the book and Chance’s paranoia and insert shots that capture each of the tiny actions that gives the book a greater sense of attention to detail.

And speaking of detail, the sheer amount of thought that goes into the decisions for the background coloring is amazing. Throughout the book, Smallwood utilizes a bevy of yellow coloring to elicit the emotion of fear coming from Christopher. The desert landscape is nothing but vast swaths of yellow sand and rock with the blue sky given a slight green tint, a hint that the bright yellow sun is mixing with the sky to taint the calming blues. There’s even a moment in a diner where Chance’s fear of Batman takes over to the point where he punches a patron, thinking he’s the Dark Knight in disguise – the background is turned into a vibrant yellow color as the fist impacts the innocent’s man’s face as Tora and the diner waitress look on in shock and horror. It isn’t until later when Ice makes the crystal home that the calmness returns to Chance and he’s able to regain his bearings. 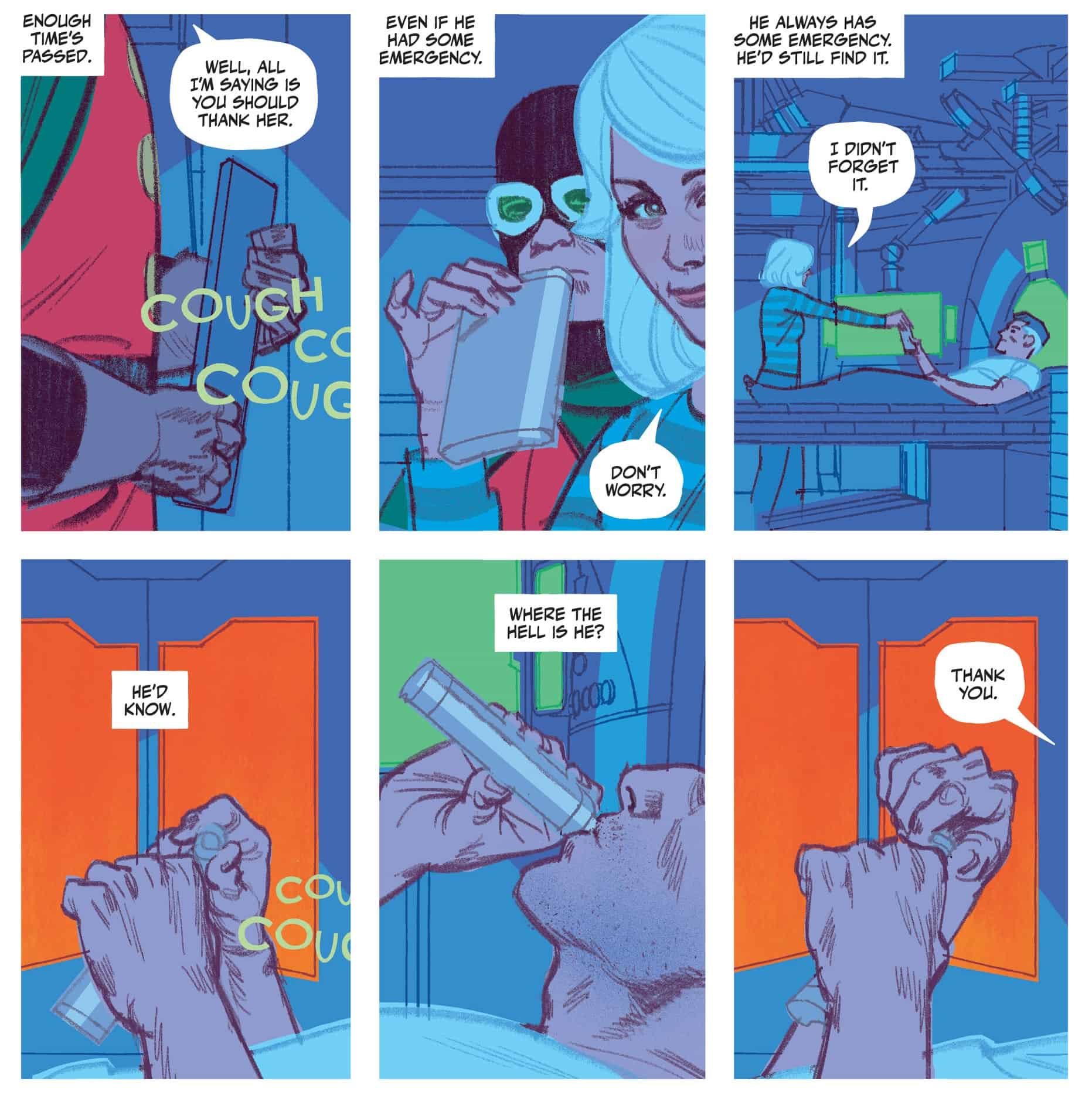 Clayton Cowles’ letters in this issue are spot on as well. There’s something about the way that Cowles letters this book that makes it nothing but a treat to read. The lack of borders and how the word bubbles sometimes cross between the gutters and into the subsequent panel is very stylish and helps to keep up the minimalist identity that the book has maintained. Because Smallwood draws his panels and landscapes with a lot of empty space, the balloons and thought boxes make the most of the space that they’re given, not obstructing characters or actions, but being easily seen and followed between panels.

The Human Target hits the mark yet again. Tom King, Greg Smallwood and Clayton Cowles are creating the best noir mystery with Christopher Chance since the Milligan/Pulido run. The writing is absolutely excellent, the art is amazing and the letters are just the chef’s kiss right on top and I can’t wait for more!