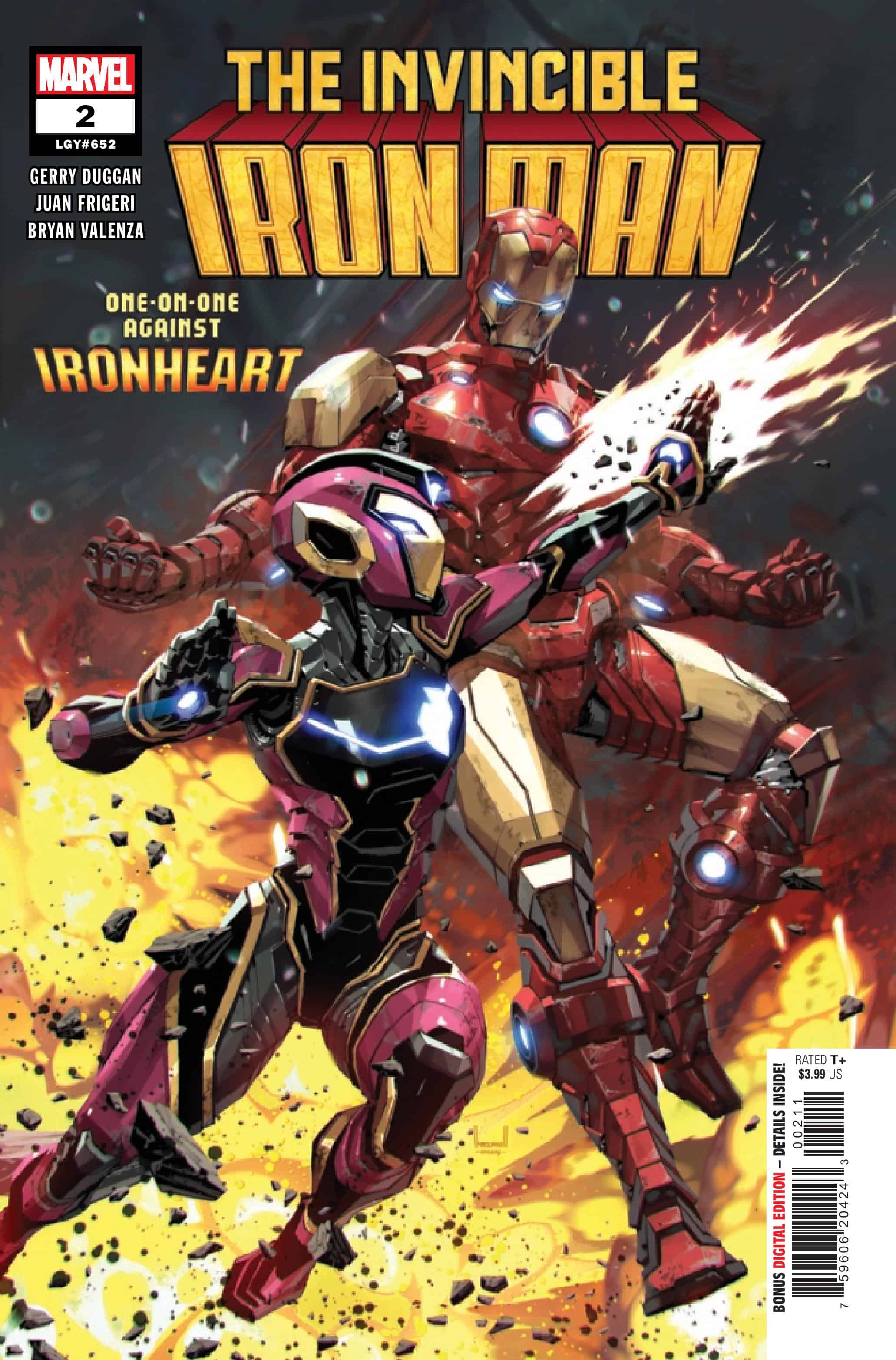 The assassination attempts on Tony’s life continue as a familiar foe returns to take him down. It’ll be up to Iron Man and Ironheart to stop him…but what secret is Riri Williams harboring from Tony? And will this change their relationship forever?

In this week’s issue of Iron Man, the new team of Gerry Duggan and Juan Frigeri start off with a bang and a team-up with Ironheart!

Another clue into who’s trying to ruin Tony, and anything else associated with the Stark brand, like his former corporation, and to top it off the Living Laser has a mad on for Stark (like when hasn’t he?) How does this all fit? Who could this mysterious new villain be, and what’s his beef with Tony? If you’re reading this, you care about it, so let’s start that review…

Tony’s life since the end of the Cantwell’s run has been a pretty chaotic mess, and it just seems to be getting deeper as time goes on. We see a pretty ominous figure sitting in a chair who’s watching as Stark and his world begins to crumble before his, and the public’s eyes. It’s pretty evident that this character, who one can only figure is Kelvin Heng (his name isn’t Feilong, that’s the name of his company), and it’s actually really exciting to see what he’s doing here. Tony’s lost other adversaries who have the political and financial clout to really make his life a living hell, especially since the deaths of Justin Hammer, and the Stanes, so getting someone of this caliber is going to be fun.

Marvel has a wealthy trove of corrupt corporate entities, like ROXXON, that they don’t utilize to their full potential, and it gets frustrating. Especially for comic continuity buffs, so what will Heng do? Are we expecting to see a crossover with the X-Men, with Heng and Feilong in the middle? Most likely, considering Duggan’s writing both

Duggan’s take on Riri is fun, even though having not really read a run featuring Riri, but I’m liking what readers are getting here. She still has the Mandarin’s rings, and actually uses them in this issue, in ways that have never really seen anyone use them like this, So hats off to Duggan and Frigeri. Juan Frigeri’s Riri is just great, her design and the effects that the rings exhibit when Riri’s using them are just top-notch.

Frigeri has been on my radar since he book ended Ewing’s Guardians of the Galaxy run, and since I’ve followed him everywhere ever since. The highlight, besides what has already been mentioned, is Tony’s armor. The current model is a favorite look I’ve seen in a long time, and glad that the team decided to keep it. We don’t need a new suit of armor every couple of years, and it’s a testament to Alex Ross’s timeless design for continuing to be seen here.

It’s Duggan and Frigeri’s second issue, and already I’m enjoying it a lot. There’s something dark coming for Iron Man, but they’re maintaining Tony’s sense of humor that’s been a constant since Robert Downey Jr’s portrayal. Sometimes that can become grating, but Duggan’s navigating has been more spot-on than eye-rolling-induced frustration.

While making Tony’s life a living hell isn’t something new, the new team of Duggan and Frigeri are making it light with some fun dialogue and gorgeous art to look at. All signs point to a crossover with the X-Men book (that Duggan’s also writing), so this should prove to be interesting.