ICYMI! Supergirl: Woman of Tomorrow #6: The Tree Outside of Her Window After the perils of Barenton, Supergirl and Ruthye continue their righteous quest, but after such a harrowing near-death experience, can Supergirl overcome the pain of the past and the future dealing with Krem?

It’s shocking that after six issues, this series continues to astound on every level. 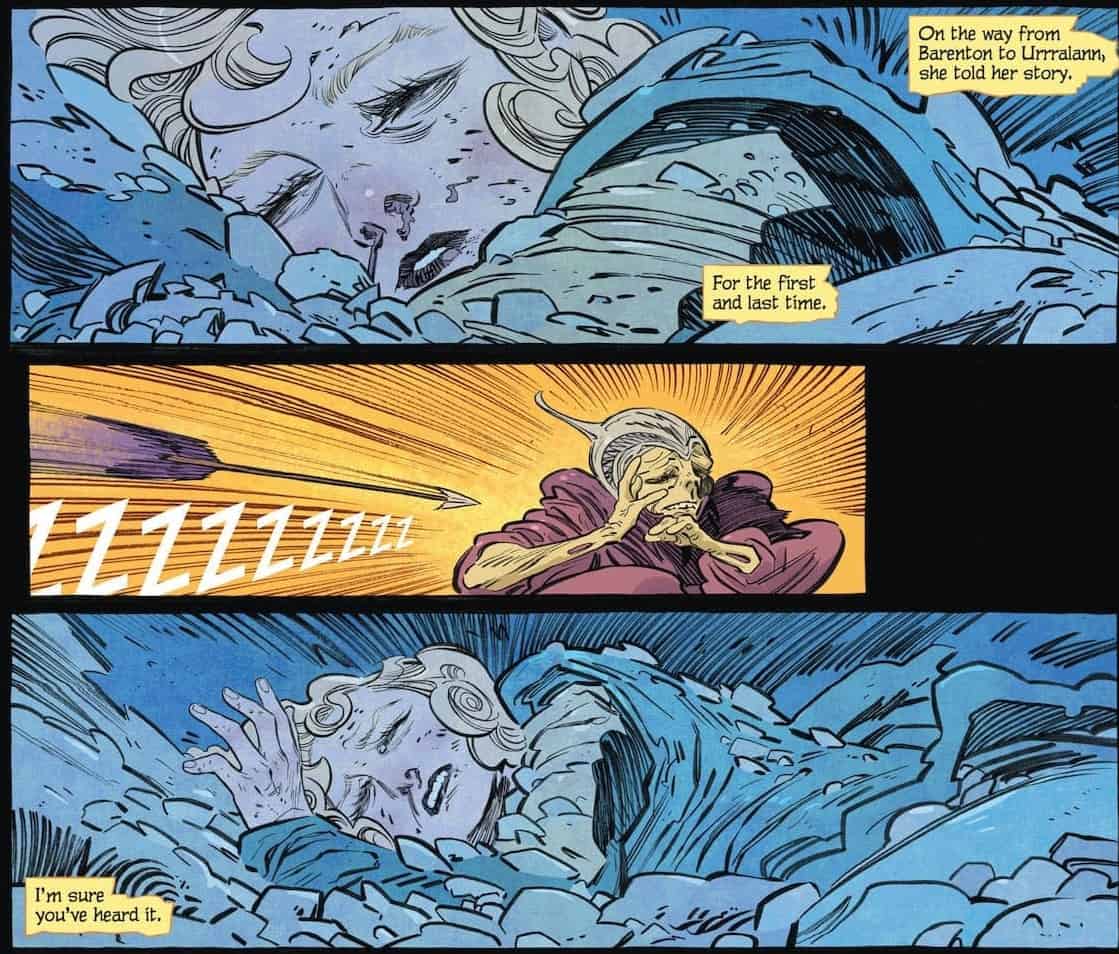 Supergirl is one of the characters that I fully believe Tom King has a complete grasp of and his version of her account of the Destruction of Krypton might be one of my favorites ever. He presents it as a desolate time where Kara watched the people that she knew and loved either die in horrific ways in the initial mayhem or slowly fade away as they realized that the planet itself would slowly poison them all as it turned into Kryptonite. Through it all, Supergirl was inspired by her parents to never give up hope and that only further helped her become the hero that she was destined to be.

Because he was sent to Earth as a baby, all of Superman’s knowledge of the planet is second hand. He became the man that he is because he was, luckily, found by wholesome people and that is well and good, but Supergirl was there. She saw their people crushed by buildings and waste away because of radiation and she would have given up hope too if not for her parents telling her to carry on because they loved her. The bravery gained through this experience shows up during the visual story of the book as she outruns the transportation device that stranded her and Ruthye in the last issue. 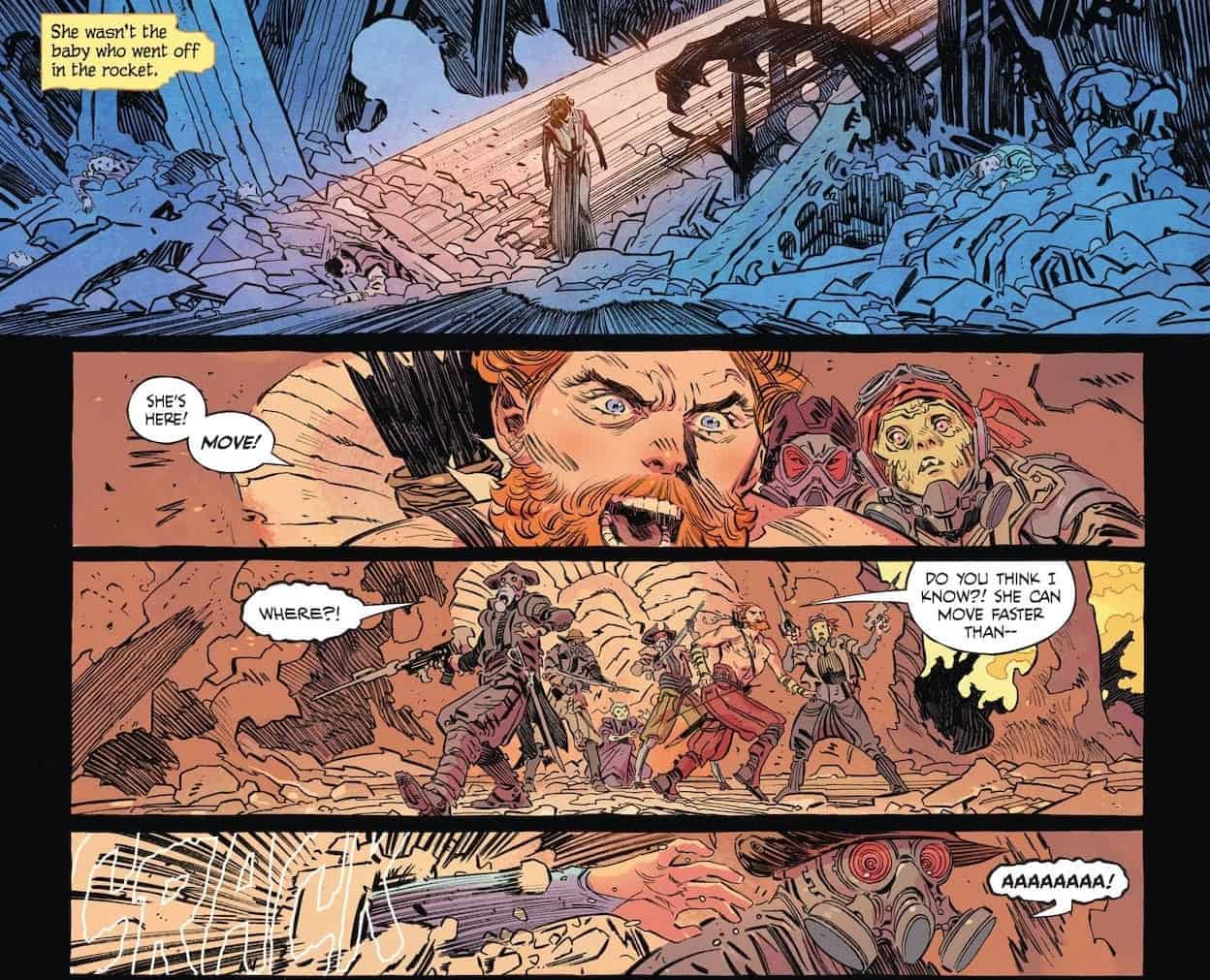 If I were to compare this to the Hero’s journey, I would say that the last issue was The Test, where Supergirl and Ruthye have to overcome tremendous odds to reach their ultimate goal. They are very nearly killed, but pull through together – this issue then becomes the Approach to the End as they finally catch up to Krem, but have one more obstacle to overcome before they get to their final battle. King has paced his story beats very well, so much so that it makes me hope that we get more of his writing with her; Similarly to how good his writing of Dick Grayson was during his amazing run with the character.

Bilquis Evely continues to crush this book with her absolutely gorgeous and stunning art alongside Matheus Lopes’ highly evocative colors.

Throughout the series, we’ve seen wonderful, lush landscapes, beautiful boggy environments and even pretty cities, but this time we’re presented with amazing scenes in space and a view of some destroyed city on Krypton. One of Evely’s strengths throughout this series is her ability to give so many scenes a sense of scale, speed and serendipity; that last one comes with the VERY SUDDEN reappearance of Supergirl’s magical horse, Comet. The pair dash through the cosmos with a quickness as the Orb of Mordru chases them, trying to teleport Kara once again. The book is given a breakneck pace through speed lines, Comet’s stride and Supergirl’s face as she winces at how fast they’re traveling. 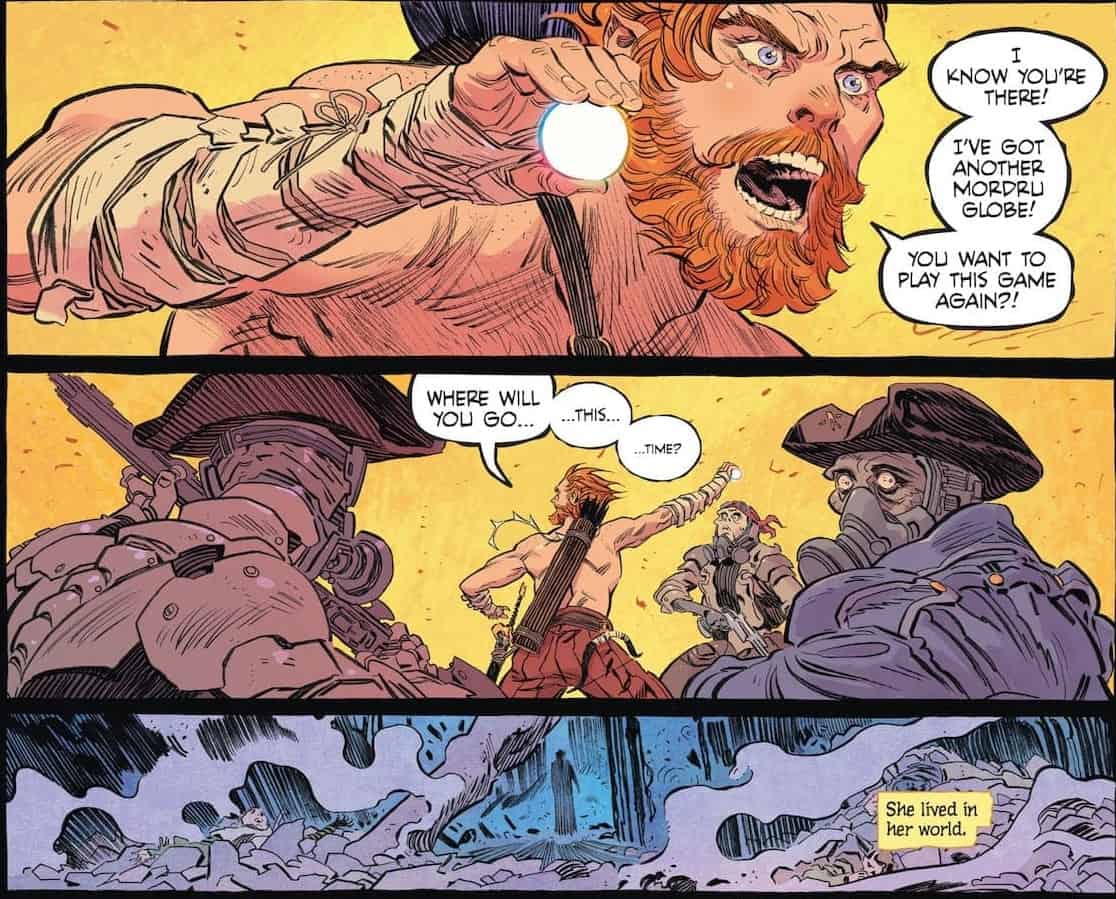 Intercut between these scenes are pages showing the aftermath of the first shockwaves on Krypton and eventually Argo city breaking off on its own. Watching Supergirl look at the obliterated remains of the place she called home is haunting, especially with the sun in the background, hanging like an omen amidst the chaos, smoke and Kara’s own blank eyes. And later on when she’s part of the shielding effort to prevent Argo’s foundations from killing everyone, readers can see the exhaustion on her face as with each panel she continues to work while her fellows give up due to tiredness. Her expressions as she watches her mother pass and then being sent off like her cousin Kal are absolutely heartbreaking.

As with each issue, Lopes colors are absolutely beautiful in every regard. Switching between muted colors for scenes in the past and more vibrant colors in the present, Lopes is able to make this book feel like a complete package of a story. Each of the space locales feel very different from each other, utilizing light blues for some waves of the outer cosmos, bright oranges and reds for the giant sun as they zip on by and even a spiral of green and purple as they pass a galaxy nearby. 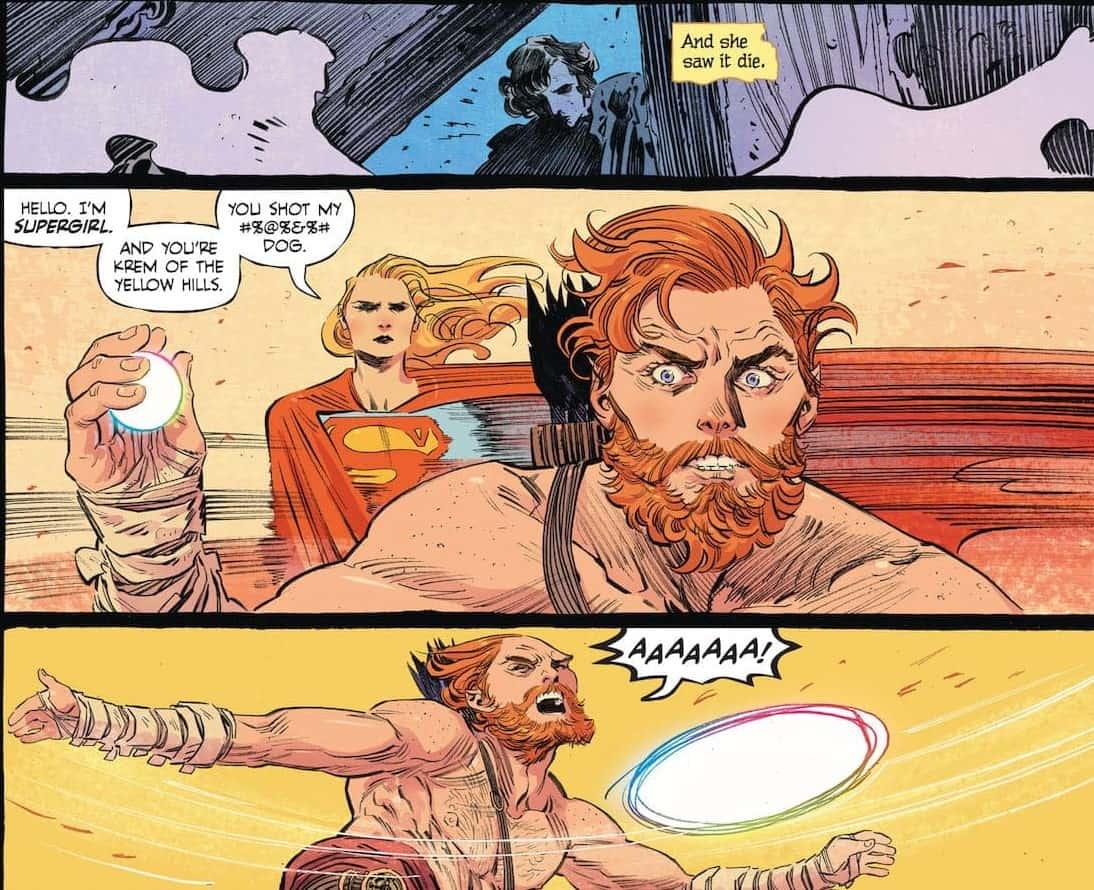 In the past we see a lot of light purples, to give the past a bit of haze; some light green, showing the effect of the city being poisoned by Kryptonite; and even some light red from the sun, showing that even in the most dire of circumstances, Kara has the ability to hope. Every page is a beauty to look at and Lopes proves that he might be one of the best colorists working at DC today.

As Supergirl leaps towards its conclusion, I have to give a hand to Tom King, Bilquis Evely, Matheus Lopes and Clayton Cowles. This has got to be one of the best written, best drawn, best colored and best lettered comics DC is publishing at the moment. With quality like this, there's no doubt in my mind that this team is going to stick the landing!

ICYMI! Supergirl: Woman of Tomorrow #6: The Tree Outside of Her Window