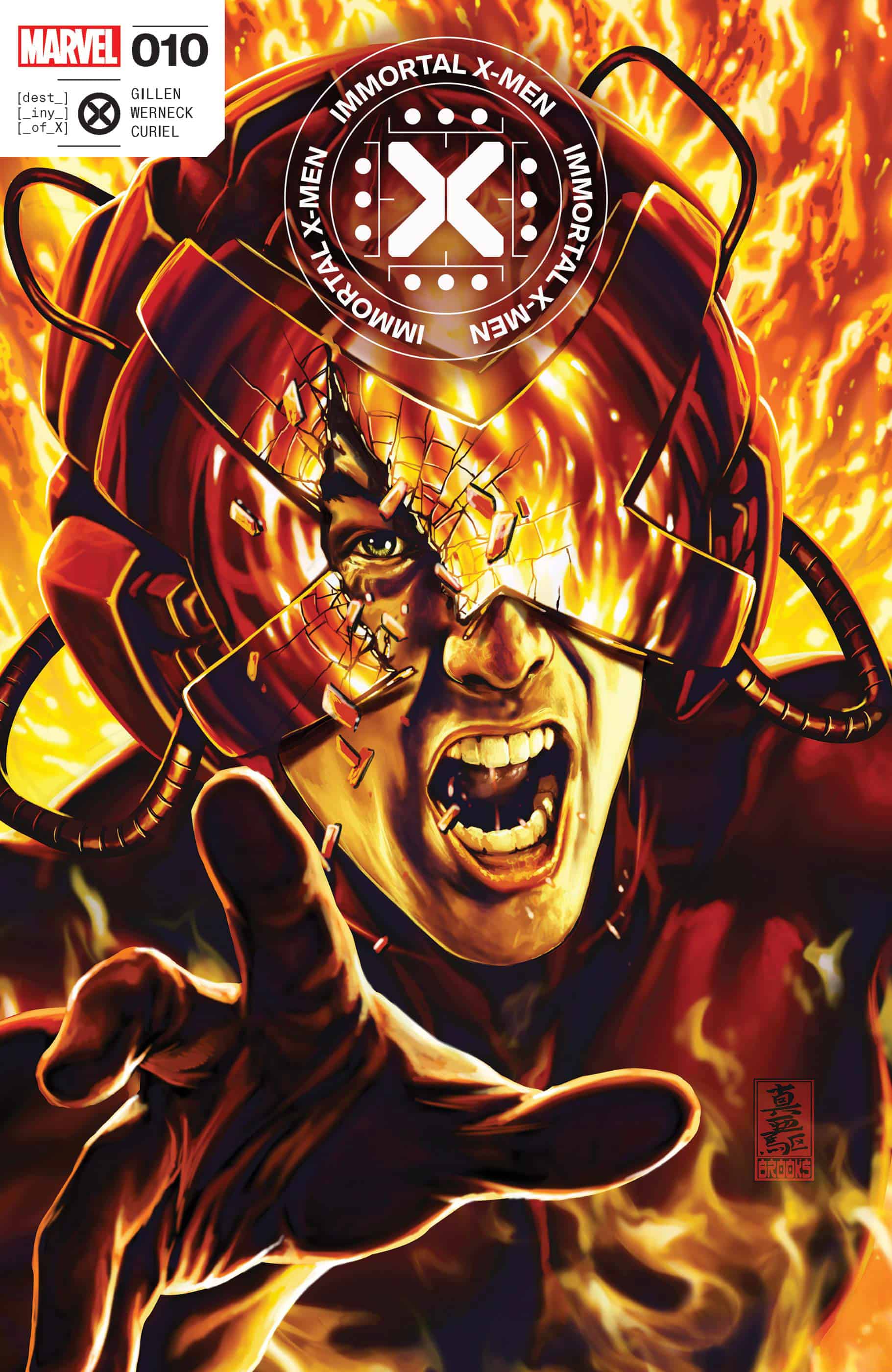 Why was Sinister so determined to slaughter as much of the council as possible, if he knew about the failsafe to bring Hope back from the dead? The answer is as chilling as the method of murder.

This issue made me sorry that Gillen isn’t handling the entire upcoming Sins of Sinister event all by himself. Don’t get me wrong, Al Ewing is a brilliant writer, and I’m certain that his terrible visions of the future will mesh nicely with the themes that Gillen is plotting, but it’s difficult to imagine anything more horrible than what was alluded to within this story. Gillen and Ewing are brilliant artists, operating at the height of their skill. Spurrier is, and I’m phrasing this as generously as possible, nowhere near on their level. I’m just hoping that he will stick to the gross-out mayhem he’s good at and curb his tendency toward racist characterization and shoddy philosophizing.

In any case, Gillen’s abilities as a writer make it obvious that Immoral X-Men will be an unforgettable, unmissable experience. This issue was a master class in cultivating an ominous tone. Xavier’s appalling self justifications, his deep-seated need for control (over others, if not himself) and his already vile tendencies for both hubris and manipulation were brought dramatically to the foreground here. The most evil people are often convinced of their complete and utter moral rightness. And Xavier, as depicted here, is just barely walking that line. He’s teetering, as one would if they were balanced on the blade of a knife, edging out over perdition. The slightest wind could topple him. And it’s getting very blustery, just now.

As for the plot, it’s clear that ending the Sins of Sinister event will require redoing Judgement Day. To paraphrase a fairly well-known poet, Sinister’s end is in his beginning. It’s also clear that someone (possibly a future version of Sinister himself) has been tampering with Sinister’s Moiras, and that this fact will play into the impending stories. It’s also fairly obvious that Sinister’s plot to murder Hope (and the rest of the council) was intended to create the opportunity to contaminate as many of them as possible. After all, Hope provides the soul of The Five, and she can access the mutants as they are being reborn. Xavier and Emma are capable, as Charles so smugly reminded us, of forcibly altering people’s minds. This is going to lead to massive horror and devastation and I, for one, cannot wait for it to get started.

The spared characters all have roles in the SoS event (even if some of them are being handled by Spurrier) and this was a method of very cleverly drawing the battle lines for the next, oh, thousand years or so.

Lucas Werneck was, as usual, absolutely brilliant. His art is luscious, detailed: perfectly capturing both character and emotional tone. The last page of this story is, by itself, more chilling than anything he has yet produced. David Curiel’s colors are absolutely masterful, shading each panel with depth and strong emotional nuance.

This is, put bluntly, an astonishing book. It functions both as a perfect glimpse into a mind composed of overweening hubris and as a horrifying setup for what is certain to be one of the most memorable comics events of the year. I cannot wait to get this sinful party started.