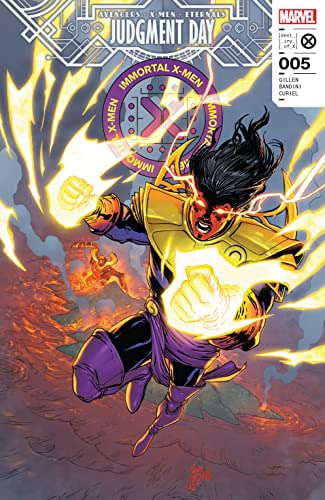 This A.X.E.: Judgment Day tie-in shines a light on the faith of one of the oldest Krakoan mutants.

Kieron Gillen uses this issue to cement his mastery of the comic form. This is a profound, deeply psychological analysis of a religious fanatic, told with tenderness, action, and a hell of a lot of heart. Unlike other writers handling similar themes, Gillen treats his lead with compassion, understanding, and a great deal of critical depth.

This story is tightly-focused: the Quiet Council is under telepathic and physical attack and Exodus must battle his way free of his own memories if he is to do anything about it. Through these memories, which we live with him, we are granted insight into a character who has previously been rather thoughtlessly rendered. We watch him fight to save a human who was faithful to him. We witness the terrible, shocking sprawl of the modern world. We grow to understand how his faith has shifted across the centuries, changing on the surface but remaining true to his core ideals. In Gillen’s hands, Exodus is depicted as a true Knight, sworn and serving his Lord to the best of both his abilities and understanding. In Gillen’s hands, this knighthood (this service) is depicted as a double edged weapon, one that cuts him as deeply as it does his enemies so that Exodus becomes a tragic figure as well as someone who is almost heroic. Gillen explores the flaws of Exodus’ faith without ever attempting to erode the nobility of the character.

I barely even thought of this character before I came to him in this story. Now I love him. I cannot wait to see where his story goes.

Michele Bandini’s art perfectly captures the sense of wonder embedded in the heart of this story. David Curiel’s colors are rich when the scenes are bright and beautiful, vivid when the subject matter is dark.

This is, in every way, an astonishing book. I cannot wait to see what happens next.

This is, in every way, an astonishing book. I cannot wait to see what happens next.