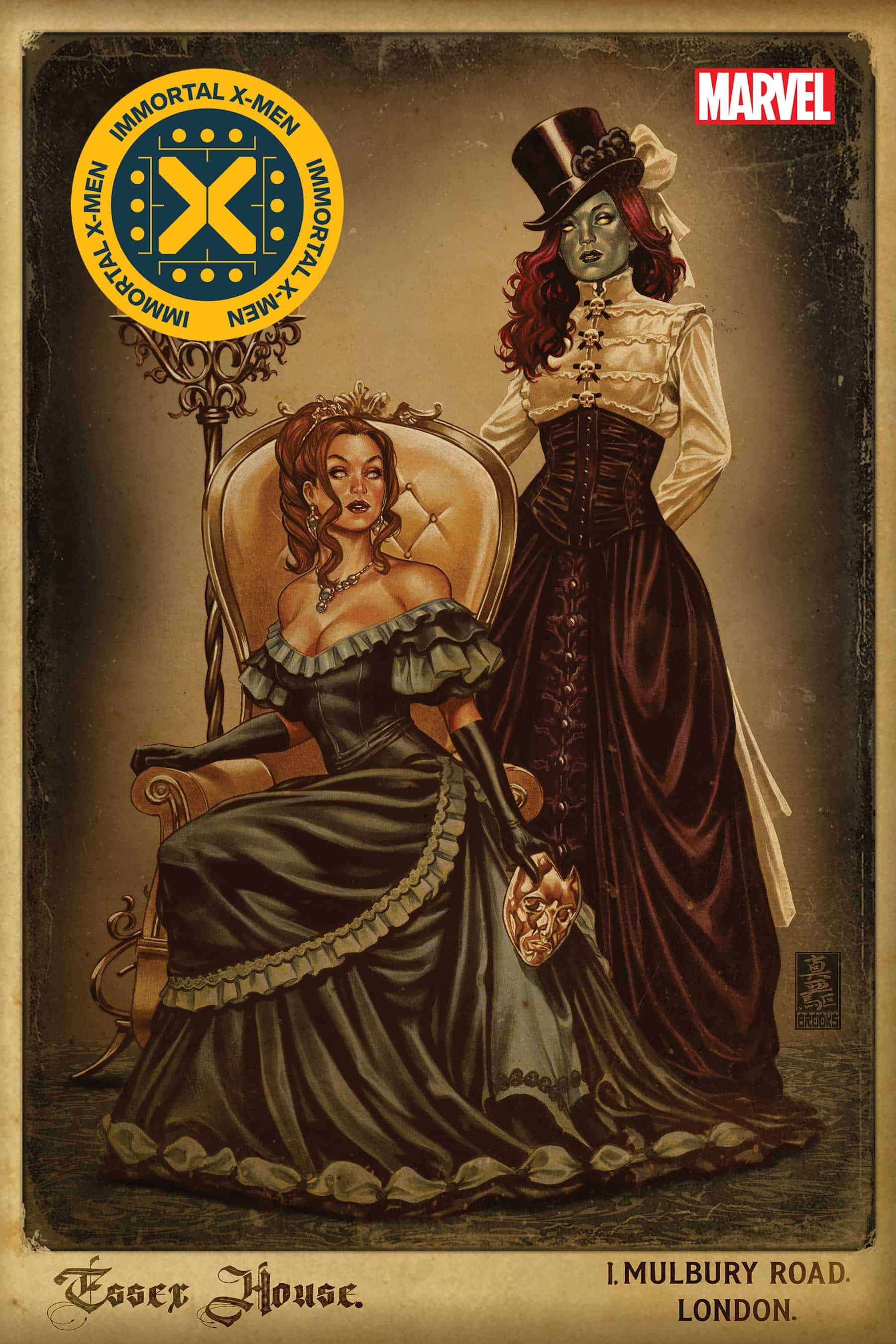 In which Mystique tracks both Nathaniel Essex and her own wife across the decades.

Reading this action-packed-yet-intimate summation of the marriage of Raven Darkholm and Irene Adler reminded me of nothing so much as another famous lesbian marriage: that of the poet (and possible fascist) Gertrude Stein and her wife, Alice B. Toklas. There are similarities between the two partnerships: one woman was highly visible, thriving in the light of fame, the other was seemingly obscured by her love, even as the fact of their love served to reveal her. One partner is outspoken, the other seemingly frustratingly silent. Which witch is which is, of course, entirely up for interpretation. Gillen wrote this issue in a style that is brimming with erotic poetry, with love, and lust, and tenderness barely consealed behind a layer of modernist brutality, so I’m structuring this review in a way that is intended to honor the marriage it depicts, borrowing the structure from Stein’s most well known work.

Mystique describes her wife as ‘a gift in a gift in a gift’, echoing Stein’s ‘Rose is a rose is a rose.’ Mystique and destiny flirt via cutting remarks, exchanged insults: words which flash like blades in the dark. Irene hides secrets, puzzles and mysteries, for Raven to uncover — transforming knowledge into a highly erotic intellectual scarf dance, as though the blind seer were Salome dancing to win the severed head of John the Baptist. Irene transforms deadly serious manipulation into a language of love, a means of keeping her wife on the hook long enough to ensure her own survival. This is a new and refreshing take on the ‘evil, manipulative woman’ trope, one which Gillen brilliantly undermines even as he uses it.

Being composed of mysteries herself, Mystique feeds on questions to survive. She plays detective (in more than one sense) embodying even The Great Detective, but really she’s more like a Watson, tripping gamely behind Irene’s careful footsteps. In the guise of a prostitute (creating petticoats from flesh) she interrupts Sinister at his meal and inadvertently sets the stage for both future survival and atrocity. Gillen, cleverly, depicts her as being well aware that she’s playing checkers to Sinister’s chess. She stands it because she knows that Irene is playing on a different level entirely. And she trusts her wife.

Every woman needs a room of her own, and an office on Baker Street will do in a pinch. Likewise will a secret 1940’s eugenics lab. Even a cupboard packed full of slumbering soldiers will prove sufficient. Raven never fully grasps what Sinister is planning, but her wife knows. And careful readers will, too. After all, the evidence is there. We know her methods (his, too) all that’s left is to deduce based on the evidence at hand. Open the door, walk down to the basement, and stand amidst the empty, broken tanks, each one is marked with a suite from a game of cards. Poker, perhaps. Or something else.

I’ll give you a hint about what’s coming, read those cards for you a bit, if you choose: you beat the machines by combining mutations and magic. See Legion of X if you need it spelled out.

The art in this book was absolutely phenomenal. There’s a barely controlled charge, imprinted on the page, whenever Irene and Raven are sharing a panel. Michele Bandini is particularly adept at depicting Mystique’s transformations, utilizing a gorgeous, swirled ink effect. David Curiel’s colors set the tone of each scene absolutely brilliantly. These artists work together exceptionally well.

This is the Mystique story that we've all been waiting for, as layered, nuanced, and dangerous as the woman herself.