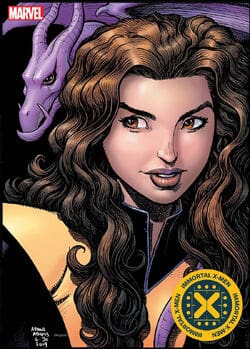 Sinister has ten tries to murder the entirety of The Quiet Council. Kate Pryde has one chance to stop him. Here's hoping she can make at least one set of numbers add up.

Although this issue was told from the perspective of Captain Kate, Gillen didn’t have a chance to really dig into her character as the timeline was being reset every couple of pages. This was a very interesting narrative choice, and it led to a story that was simultaneously hilarious and absolutely horrific. Desensitization to extreme levels of violence, due to sheer repetition of same, often lends itself to comedy, and this story provided a lot of both.

The fact that, after pages and pages of Essex managing to slaughter only himself (in increasingly improbable ways) could have made the climax less impactful, but Gillen was adept at reminding readers both of the potential stakes (a very real threat to the process of resurrection itself) and the fact that, by the end, the heroes have the proverbial One Last Chance to set the matter right. The power of the writing was even enough to erase the fact that the Quiet Council has always expected betrayal from Sinister and should, therefore, have been better prepared for his treachery.

The above statement about the relative lack of characterization available in this issue does not mean that characterization was absolutely lacking in this book. We were privy to an odd moment of superficial tenderness between Sinister and his animal-hybrid assistant/pets. We got a glimpse of the ways in which Destiny is manipulating Sinister by playing to his hollow, deeply insecure egocentrism. We had the first confirmation of Kate’s (at long last realized) bisexuality since her same-sex kiss in Marauders.

We were also, unfortunately, reminded of Nightcrawler’s new horns and the fact that the mess Si Spurrier is writing in Legion of X will not be limited to that book. Though, hopefully, it will all be undone after the upcoming Sins of Sinister event.

Lucas Werneck’s art was, as ever, perfectly balanced on the thin edge between beauty and action. Kate got to break out a lot of her iconic 1980’s poses, some of which were executed while she was absolutely, lovingly drenched in blood. He has a knack, a true gift, for crafting detailed, world-building backgrounds, capturing facial expressions, and wetly exploding Sinister clones into moist, meaty chunks. Adding to this, David Curiel really got a chance to play with his colors — most notably the interior shades of purple, ochre, and of course, copious amounts of blood red.

For a story involving almost ludicrous amounts of physical carnage, this story was both hilarious, deeply worrying, and very, very fun.