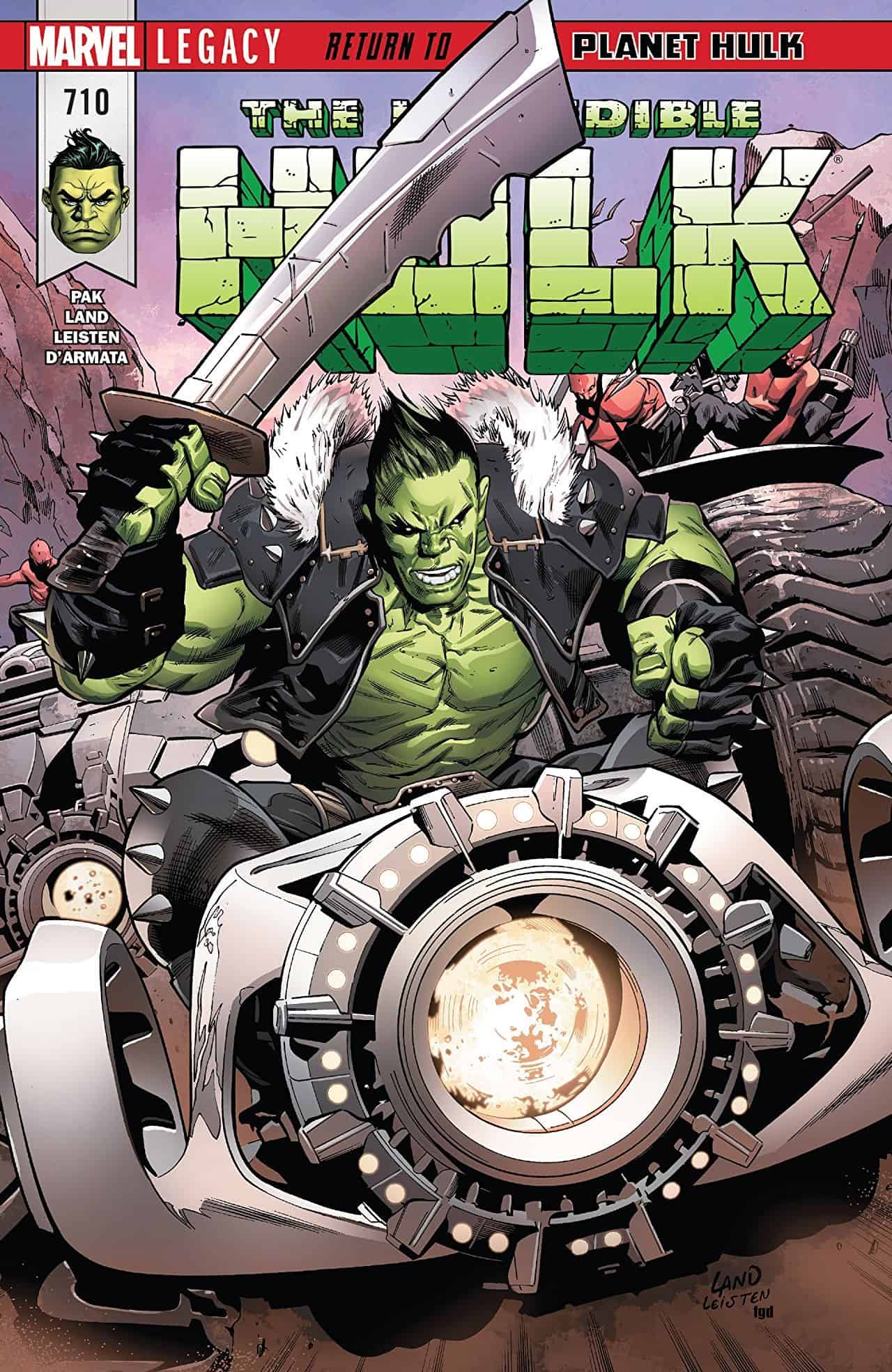 Taking the mantle as champion of clan Doka’abi, the last remaining free tribe on planet Sakaar, Amadeus Cho unleashes the rage of the World Breaker Hulk in the trials of the Gauntlet!

After a self-imposed exile in space, Amadeus Cho followed a distress call into a portal searching for the “Green Scar” only to become stranded on Sakaar, a planet once freed by Bruce Banner’s Hulk. Now a new tyranny has risen. A conqueror known only as the Warlord has used the trials of the Gauntlet to enslave the nomadic tribes of the planet. With the Hulk as their champion, clan Doka’abi finally has hope of surviving the Warlord’s rule. During the fierce battle of the Gauntlet, Amadeus Cho is forced to finally relinquish control and set loose the World Breaker Hulk.

The trials of the Gauntlet have unleashed the World Breaker Hulk. Clan Doka’abi and the Priestess Maeera spectate from their cells as their champion destroys waves of opponents, delivering exactly what their legends had promised them. 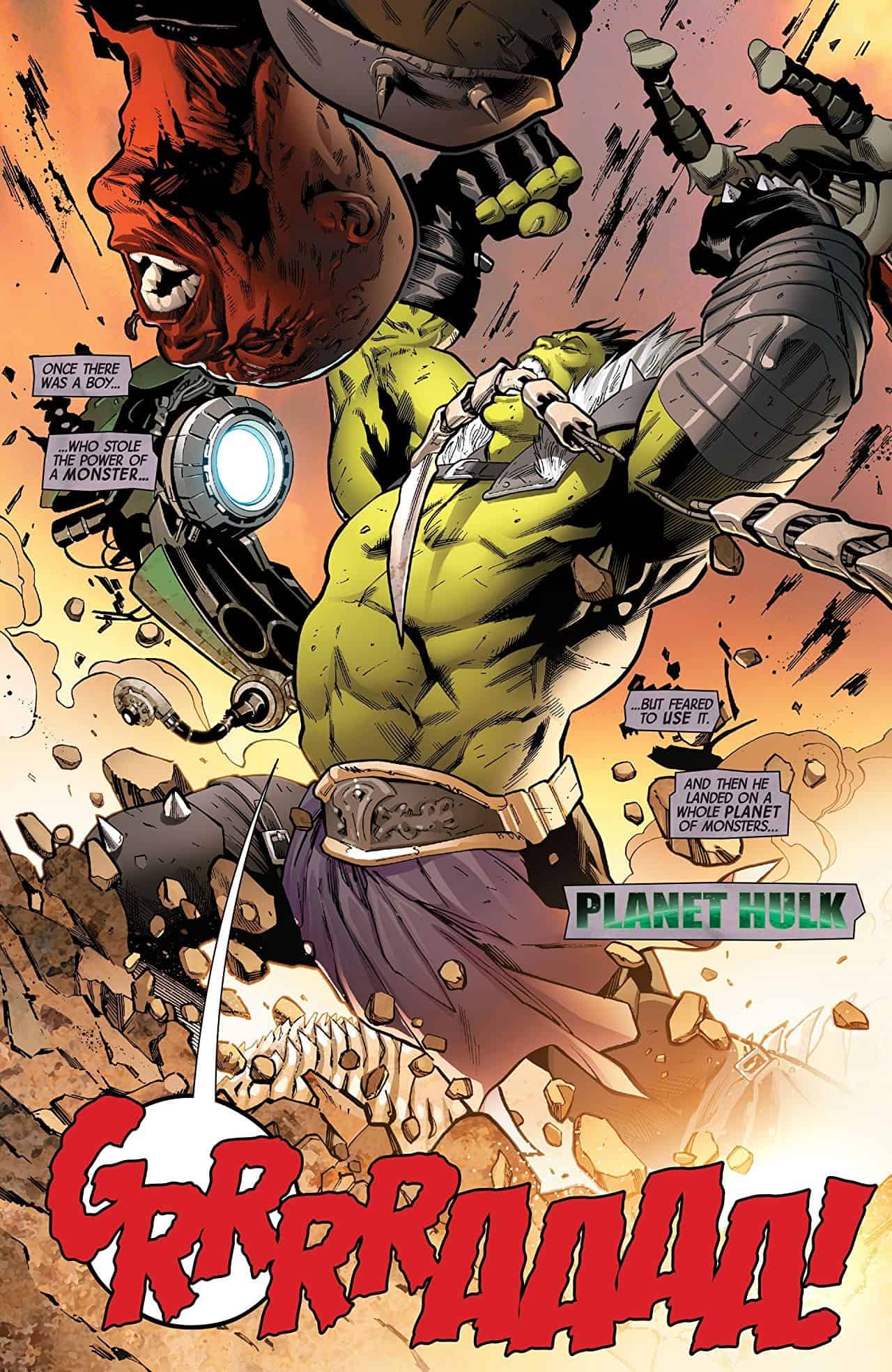 This praise from the last free tribe of Sakaar angers the Warlord. Declaring himself the only true World Breaker on the planet, the Warlord promises the Hulk will fall just as every other champion has from the other clans. As the bellowing command to finish the kill rings through the air, a combatant says his final words and rams his apocalyptic car into the Hulk. 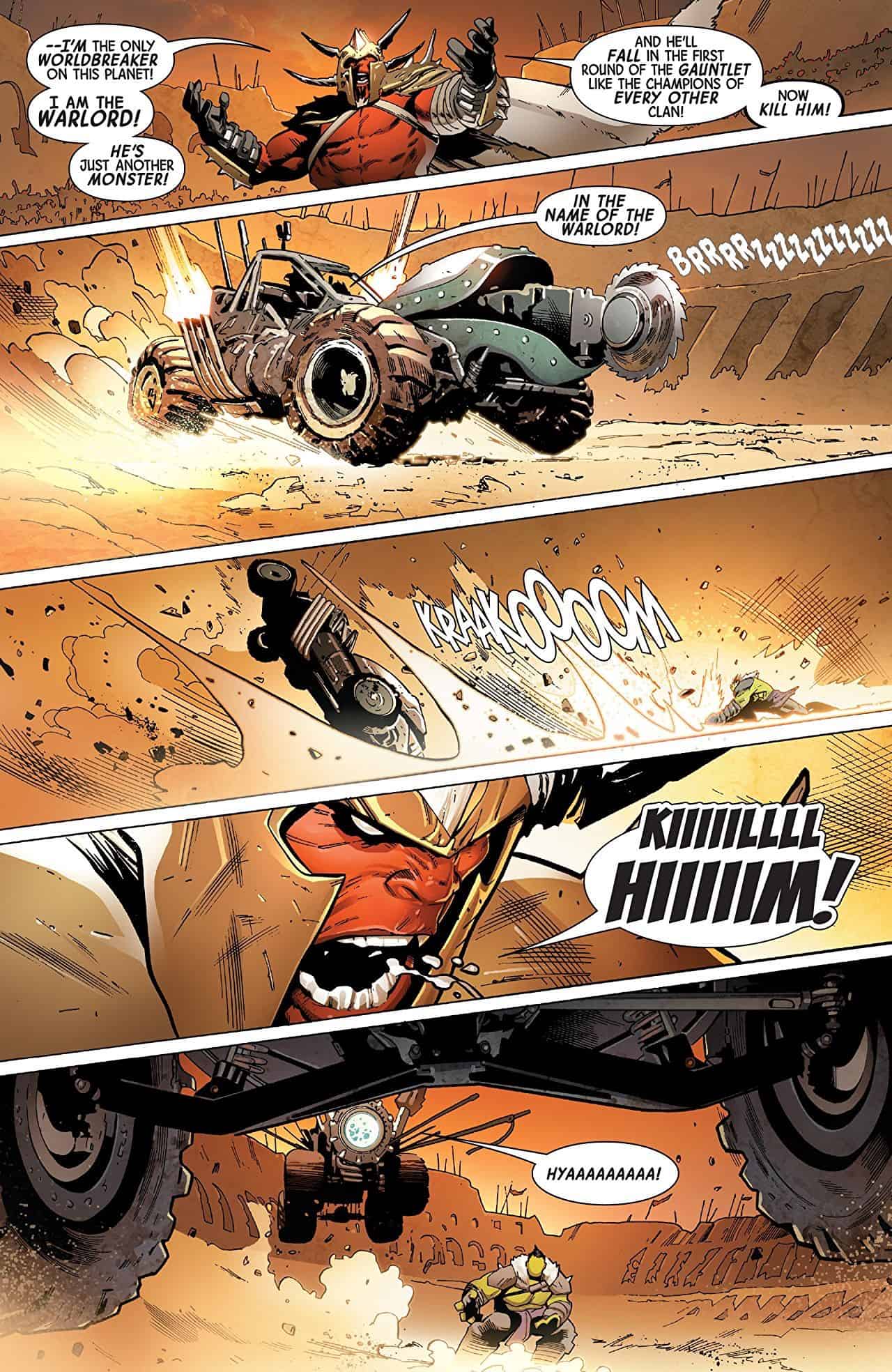 Clan Doka’abi and the Priestess Maeera watch the events unfold in pure terror. As they curse themselves for hoping against all odds, the Hulk bursts through the flame and debris of the crash, roaring in defiance. This causes the spectators to erupt in cheers. They all chant “Break Our World!” in unison as the Hulk basks in the applause.

Then it all stops. Amadeus Cho confronts the World Breaker Hulk within the mists of their unified consciousness, demanding to take the reins once again. Standing amongst the carnage, the Hulk returns to clarity and announces his victory. He demands the Warlord give clan Doka’abi the riches and freedom they were promised. This is met with gunfire from those surrounding the Warlord, who is seated upon a throne adorned with banners. He offers his forgiveness for the Hulk’s naivety and explains that like the five fingers of a fist, the Gauntlet has five levels, and Amadeus Cho had only completed the first.

During an afternoon of celebration in a holding cage nearby, the Hulk and others from clan Doka’abi await the next trial of the Gauntlet set to begin at dawn. Meanwhile, after a servant is hurled from the top of the Tower of the Warlord in a fit of rage, the Warlord himself demands to know more about the portal that brought the Hulk to planet Sakaar. Including what’s on the other side.

That night, Priestess Maeera appears within the camps of clan Doka’abi where the Hulk remains at work, preparing for the upcoming battle. She explains her understanding of the World Breaker Hulk and how Amadeus Cho was able to “push him back in his box” when the time became necessary. However, she also warns that if he continues such restraint, it could cost him everyone, he has ever cared about. While this conversation is happening, an Elder Leader of the Desert Sea Clan arrives at their camp by the name of Sharn. In remembrance of alliances shared in the past, she offers a gift of seven charged fuel cells that can provide weapons for the Hulk in the next trial of the Gauntlet. After a heated debate regarding the possibilities of an uprising to defy the Warlord, Sharn exits the camp and reveals her presence to the spies keeping watch just outside the gate.

The spies sent from the Warlord allow Sharn to continue because of the more pressing matter of understanding the portal that delivered the Hulk to planet Sakaar. Upon arriving at the portal, they quickly begin working to send another signal. Only this time the message won’t be for the Hulk, it will be for his enemies.

At dawn the next morning, the Hulk arrives at the Gauntlet to a chorus of spectators chanting “Time! To! Die!”. Though clan Doka’abi remains defiant even to the end, the Warlord announces the beginning of the second trial of the Gauntlet with a series of threats. Then without hesitation, the combatant is revealed. The Hulk stands alone, confronting a giant mechanized monster armed with a shield that holds Sharn and two other innocents strapped helplessly to the front.

This is an action-packed issue loaded with unexpected twists sure to capture your attention.

Issue #710 of the Incredible Hulk follows up on the strong introduction featured in issue #709. Although the concept of “Return to Planet Hulk” can invoke notions of the creative team simply wanting to capitalize on established popular mythological aspects of the character, this is undoubtedly a unique continuation that is worthy of expanding on the stories of Planet Hulk. Marvel’s Legacy initiative has so far reinstated superheroes such as Captain America to their former glory, leading me to believe that their eventual goal is similar regarding Bruce Banner’s Hulk. While I was hoping for the Legacy initiative to impact the newly renumbered Incredible Hulk title in a more concise manner, I am excited to see where “Return to Planet Hulk” leads and what could come as a result of it.

There are many factors yet to unravel, but Greg Pak has provided an entertaining story that manages to balance action and dialogue very well. Critical moments during the battle of the first trial of the Gauntlet are made grand by the illustrative detail and vibrant colors that create a distinct aesthetic, capturing the
tyrannical state of the planet perfectly. 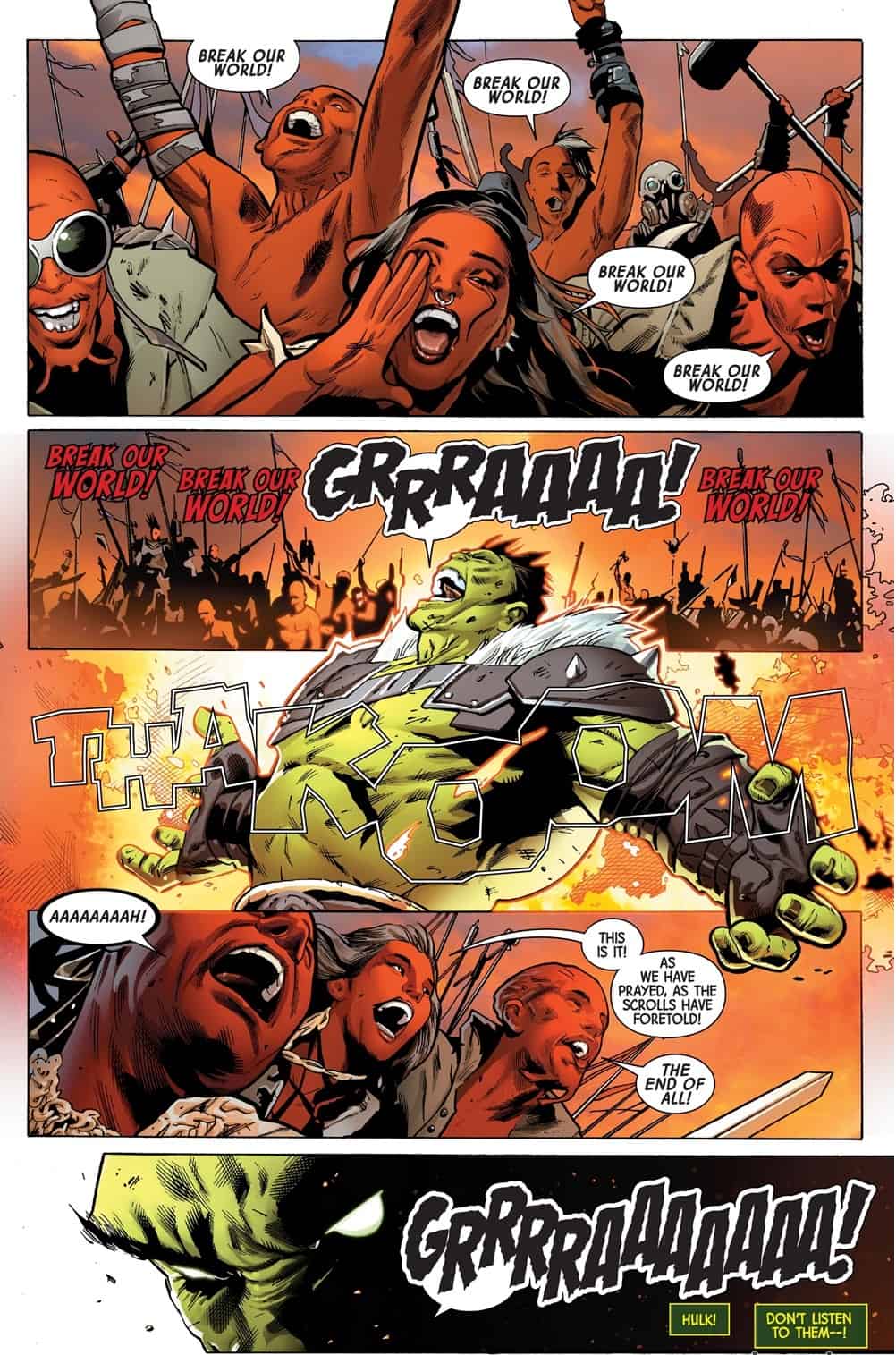 The fast pace writing and excellent visuals featured are the highlights of the Incredible Hulk #710 with Greg Pak really showing his abilities to drive a story forward interestingly, despite rehashing the appeal of a previously popular story. The villain Warlord isn’t revolutionary by any sense, but he has a menacing presence that lends itself very well to the “Mad Max” apocalyptic setting. I am positive we are in for a truly epic fight if the Gauntlet comes down to Warlord versus the Hulk!

Final Thoughts: The Incredible Hulk #710 continues an exciting “Return to Planet Hulk” storyline that successfully delves into the internal struggles of the Hulk. Although at times it relies too heavily on the popularity of previous Incredible Hulk books, a strong script and a talented artistic team make this a worthy issue that will keep you on the edge of your seat and leave you anticipating what’s to come.