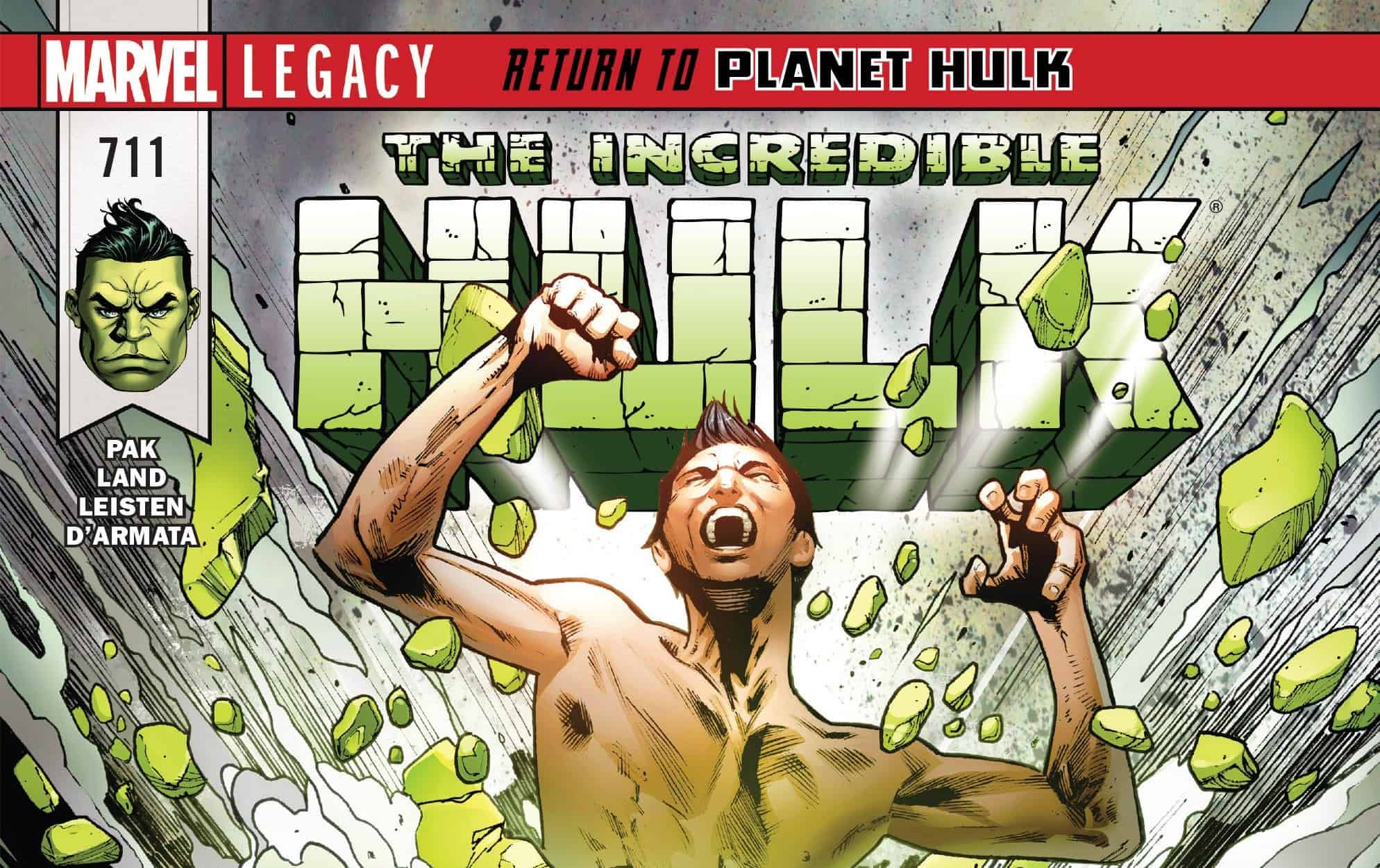 As Amadeus Cho dismantles the Warlord’s Gauntlet, Licksplit uses the Great Portal to deliver a challenger that even the World Breaker Hulk may not be able to overcome!

After following a distress signal searching for “The Green Scar”, Amadeus Cho is trapped on planet Sakaar, forced to face the Warlord’s Gauntlet of trials as the last free tribe’s champion. He has refused to cross the line and kill though, even as the World Breaker Hulk. Now in the next round, he is faced with a giant mechanized opponent using innocent people as shields!

The Hulk is frozen. Confronted with an enormous opponent using innocent people including Sharn as shields during their battle, he vows to not kill despite being urged by Clan Headman Bahng and others to unleash the true monster within. As Clan Doka’abi watches the Hulk’s refusal to kill hinder his performance, HeadmanBahng reminds everyone that he will go down fighting and breaks the gate holding them in. A warning from the Warlord’s guard declares that only one champion may enter the Gauntlet at a time. With a threat of death, the guard demands that everyone stays behind the fence, and the Hulk agrees.

Within moments he leaps into the air and with a swing of his massive sword, the arm holding innocent civilians is severed from the monster’s body. Before his opponent can react, the Hulk slams his sword into the ground and uses his newly acquired gun to blast through the monster, disintegrating it where it stands. 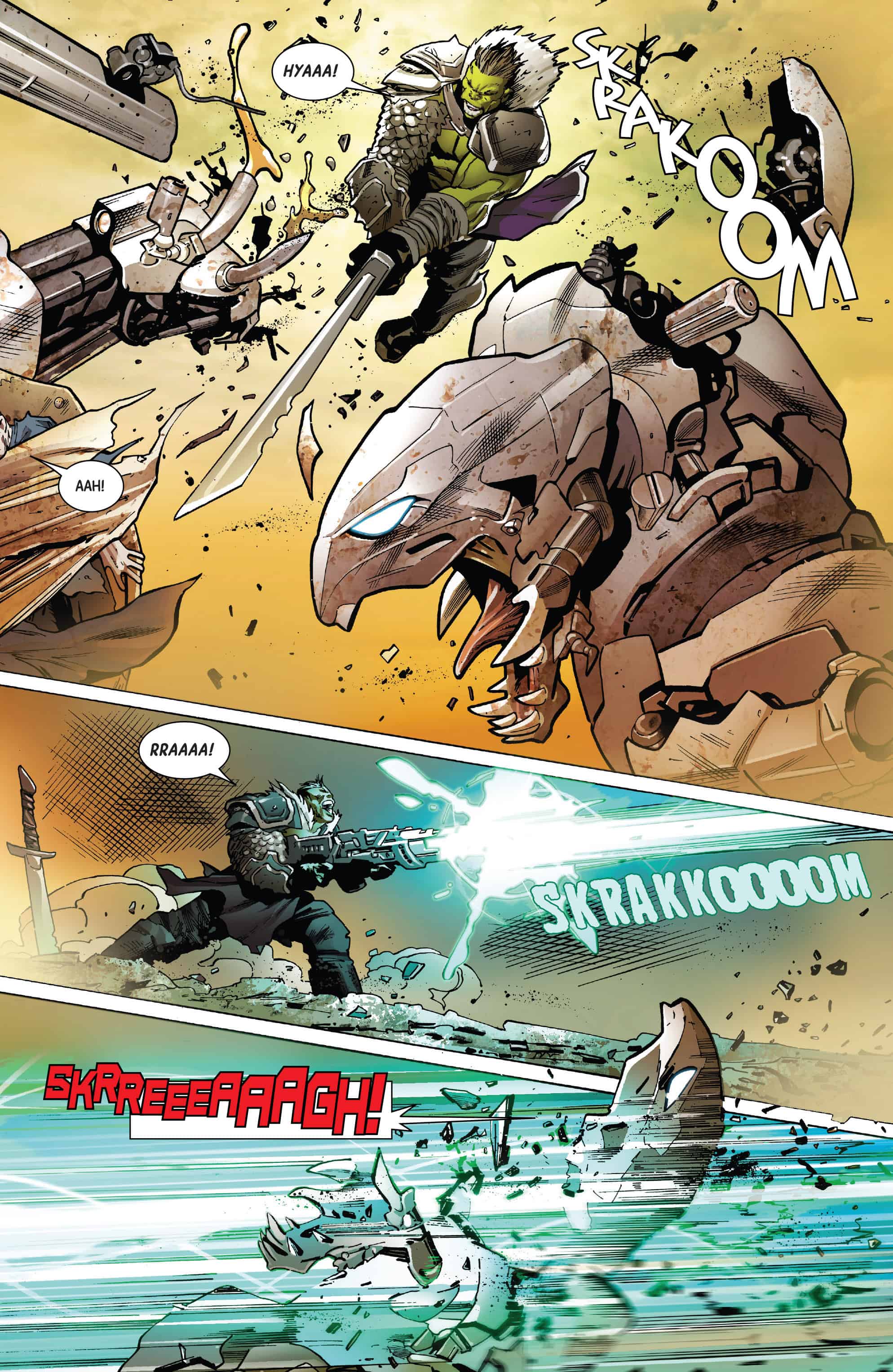 The innocents saved by the Hulk stand and recover when suddenly HeadmanBahng is struck with a blast through the chest from the Warlord’s guard. While the smoke still pours from the guard’s weapon, the Warlord explains that he was warned, only one champion allowed!

“Three Stonesteps Away” where Licksplit and the Priest work beneath the Great Portal, their patience grows thin at the lack of capable opponents being delivered. Most die on impact, and the rest are blasted by Licksplit as a test of their abilities. All have died.

Back at the encampment for Clan Doka’abi, Hulk and Chak struggle through the gates as the drag the dying Bahng inside. With his last words, he declares Chak the next Headman and asks the Hulk to never hold back again. At his funeral, Sharn arrives to show her appreciation and declare her loyalty when the Warlord’s guard rudely interrupts. He states that the Warlord has invited HeadmanChak and the Hulk to his Tower where a great feast is prepared. Although they each refuse to eat the Warlord’s offering, fearing it may be poisoned, the Warlord explains to each of them his beginnings.

He was a mere criminal before everything happened. However, when destruction came to Sakaar, he celebrated. Using his willingness to lose everything at any second, he fought without fear, becoming the Wold Breaker. While he details his experiences, HeadmanChak questions why the Hulk can’t just end everything now and kill the Warlord. Why he can’t do what needs to be done to prevent another death like Bahng’s. With a stomp of his foot, the Hulk shouts that he is the true WorldBreaker and if he makes it through the Gauntlet only to witness the Warlord cheat him or the Clan he represents out of their freedom, he will kill them all 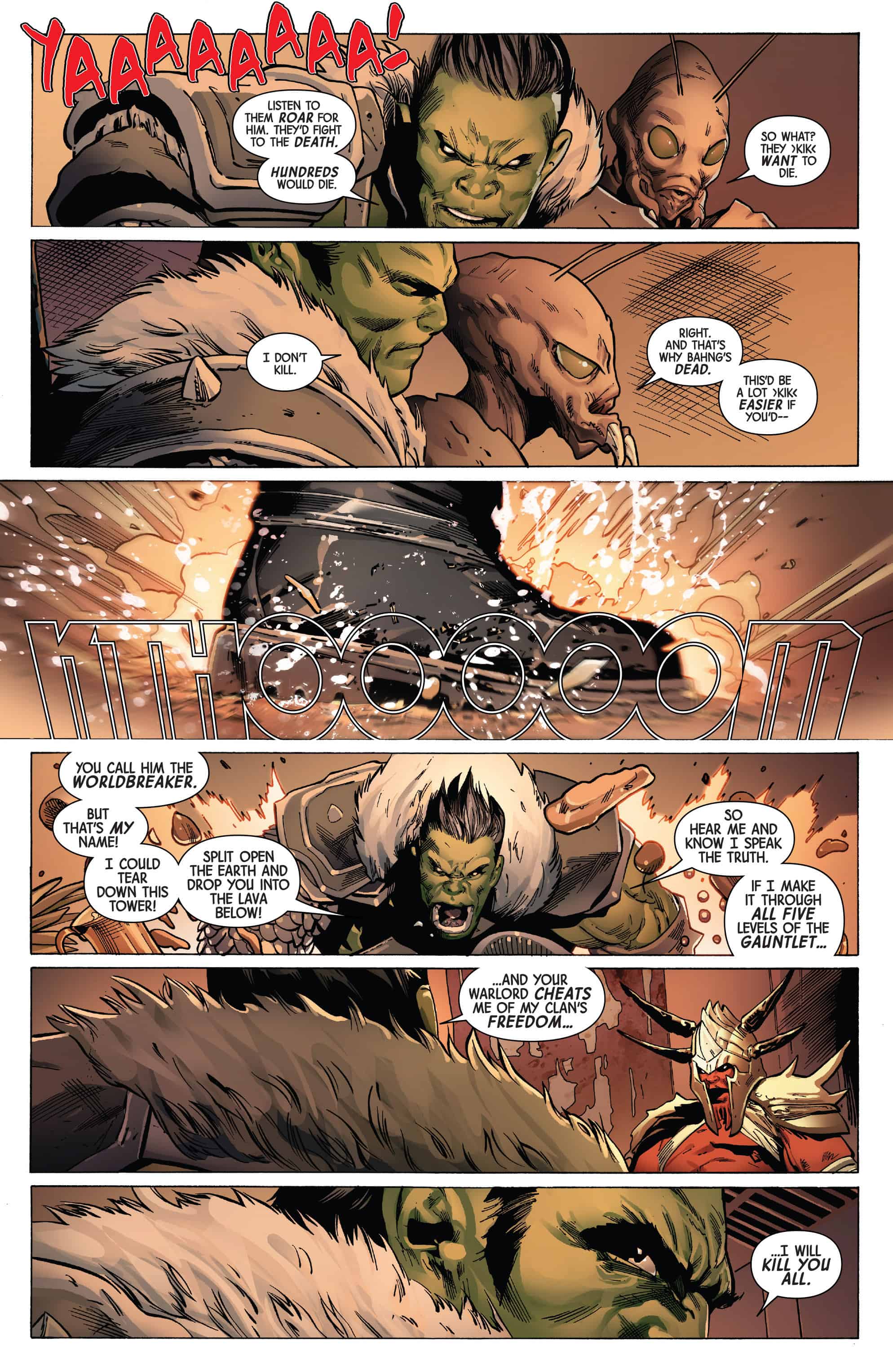 The next day, Hulk battles a giant arachnid monster in another trial of the Gauntlet, using his fury to make short work of the battle as the crowd cheers him on. Beneath the Great Portal, however, Licksplit and the Priest finally witness the arrival of a worthy opponent. On the day of the fourth trial of the Gauntlet, with a smile on his face the announcer introduces this opponent, but the Hulk laughs. Then without hesitation, he is struck in the face with a furious blow from Odinson as he declares the fall of the Hulk!

In an exhilarating issue that sees the Hulk in two trials of the Gauntlet, the third entry in Return the Planet Hulk finds its strength in glorious battles but stumbles in creating more unresolved turmoil. Overall, the series maintains to be a delightful read despite the reoccurring use of themes we have already seen before.

The Incredible Hulk #711 manages to successfully expand on the feud between the Hulk and the Warlord while offering insightful backstory elements that further develop the character’s intentions. In doing so, however, the issue’s pacing suffered slightly, giving the impression of a hastily concluded narrative meant to arrive at the introduction of Odinson. The fast-paced nature of the whole arc has been beneficial without feeling rushed, but this issue doesn’t quite find the same balance. The result is a reading experience that feels epic at times and rushed at others but ends with an amazing reveal. 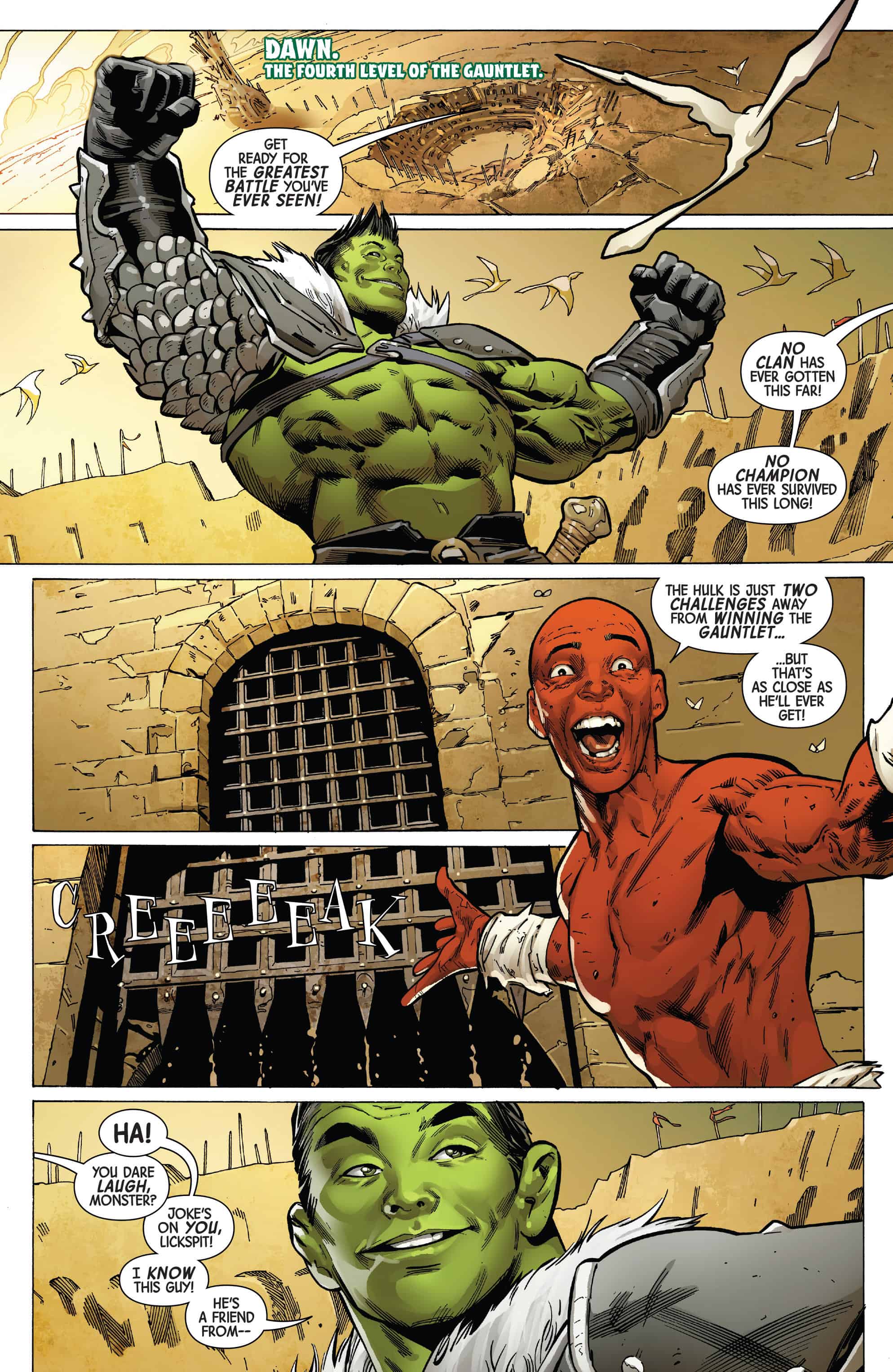 With artwork and coloring that remains top-notch, the actual battles presented during the trials of the Gauntlet feel both massive and intimidating. The panel design is noticeably unique and adds emphasis to moments of glory experienced on the planet Sakaar that encourage readers to engage with the events happening. Though the story may not have been the strongest yet, the artwork continues to thoroughly impress.

Return to Planet Hulk Part 3 is undeniably entertaining, though it doesn’t necessarily provide audiences with something they’ve never seen before. Despite this, it is a worthy continuation of Amadeus Cho’s struggle with being trapped on planet Sakaar, and well worth reading.

Final Thoughts: While continuing to be action-packed and beautiful overall, awkward pacing issues and the repeated tropes hinder The Incredible Hulk #711 from truly standing on its own. However, the ending promises not only a thrilling duel of epic proportions but also the potential for what the series holds in the future! 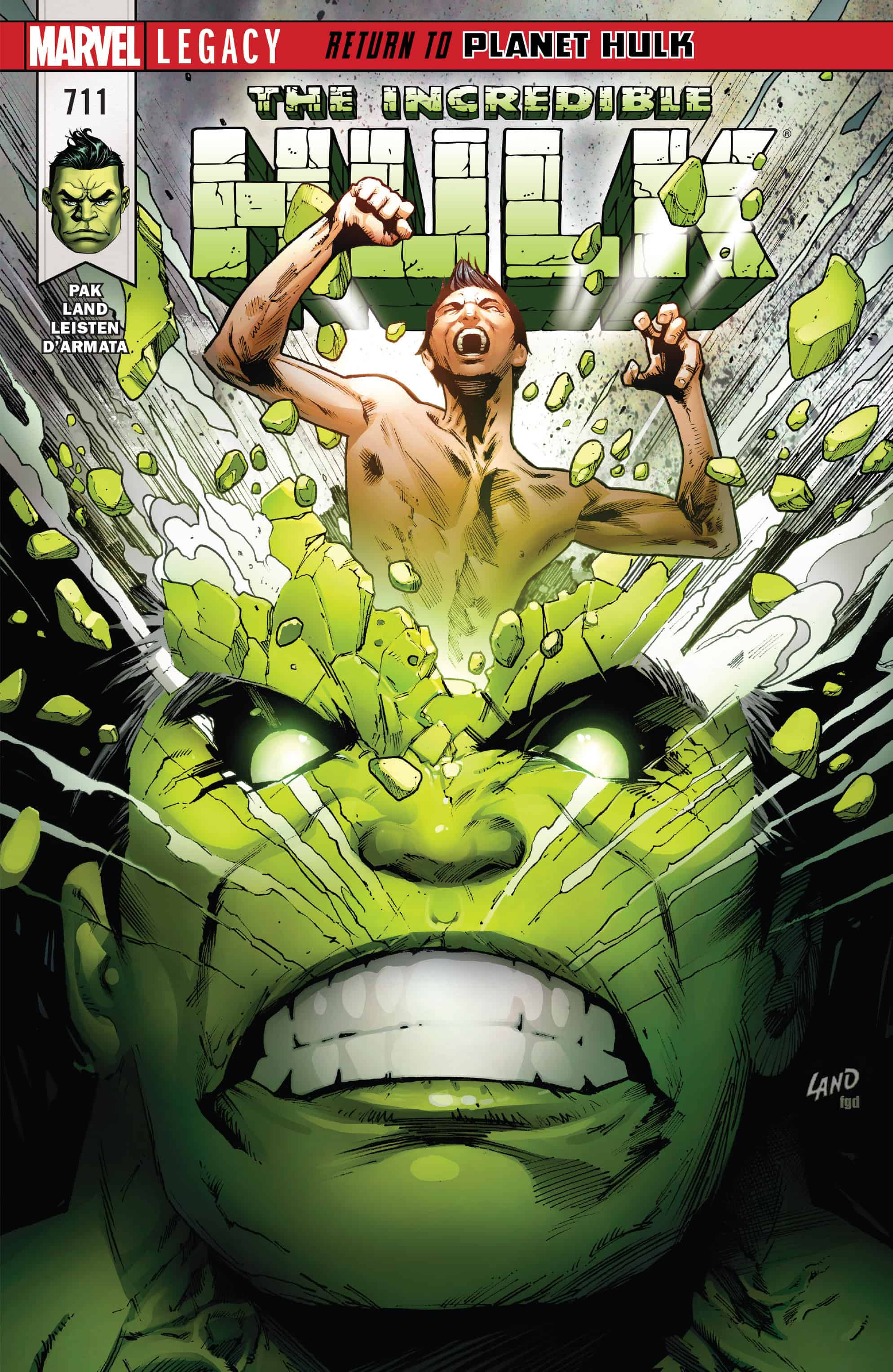 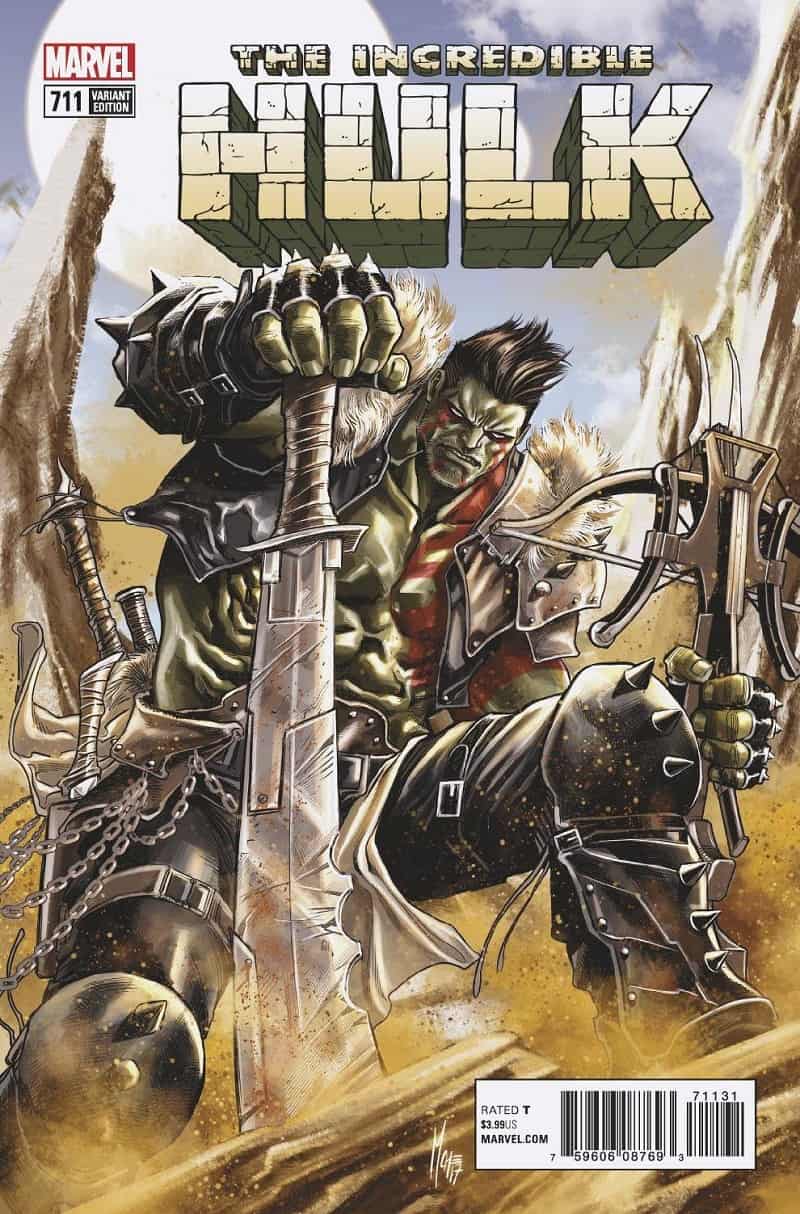