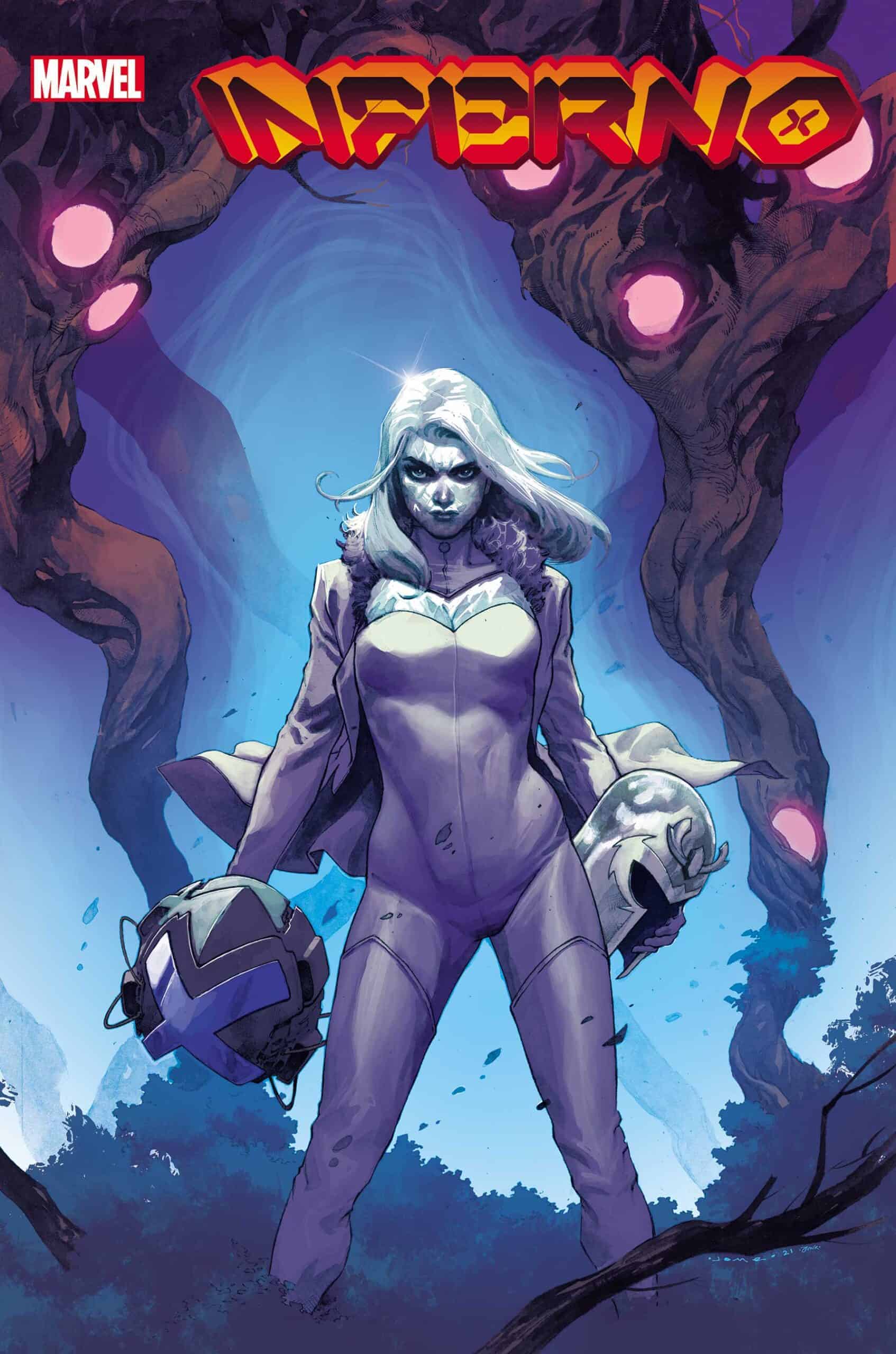 FEEL THE FIRE!
Secrets. Lies. They have a way of coming out and biting you when you least expect them. The secrets and lies of Krakoa will shake it to it foundation. Head of X Jonathan Hickman, continues a tale of consequences with one of his first Marvel collaborators, artist Stefano Caselli!

Cracks are beginning to show in the shadowy foundation of Krakoa in Inferno #2, causing the masterminds behind it to scramble. Inferno #2 shows what Mystique had to go through to get her wife back. More importantly, it details how she planned to stay a step ahead of Magneto and Xavier even before she had the mutant precog back on her side. The side effects and dangers of Mystique’s play and Magneto and Xavier’s response is not only in this title but has already been seen in the pages of Trial of Magneto and X-Force. 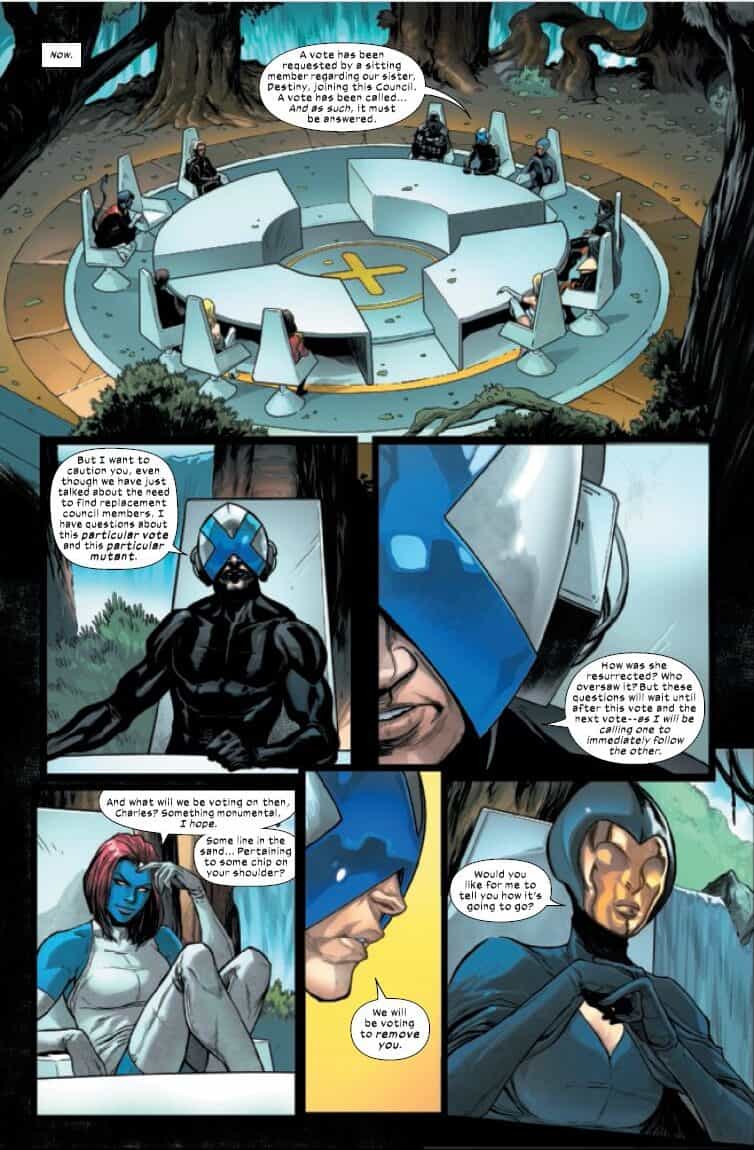 Jonothan Hickman proves again that he understands the characted dynamics of Mystique and Destiny. Much like in X-Men #6, it is this dynamic that powers the majority of the story. Mystique’s explicit motivation for the entire Krakoan era and, depending on who you ask, a significant portion of her canon has been about Destiny. Their reunion is given the emotional weight promised in Mystique’s instantly iconic line from X-Men #6. Mystique is many things, most of them bad, but her love for Destiny and the love she receives in return is undeniable. This in and of itself makes the reunion powerful. The fact that it is the first time the two lovers are able to be explicitly affectionate on panel without it being a flashback, an alternate dimension, and out of continuity story, or the default subtext makes it crucial.

While the scene and the raw emotion there elevated the issue, there was plenty of other plot points that carried it across the finish line. As Mystique makes her move, the reader is given insight into the motivations of the Quiet Council. This peak behind the curtain only serves to further prove how flawed it is, as the majority of the motivations are petty and self-serving. Chief among them are Xavier and Magneto as they conspire with Moria X on how to react to Destiny’s return. Also, things are happening with Orchis as Hickman slips in some foreshadowing about more secrets at play. 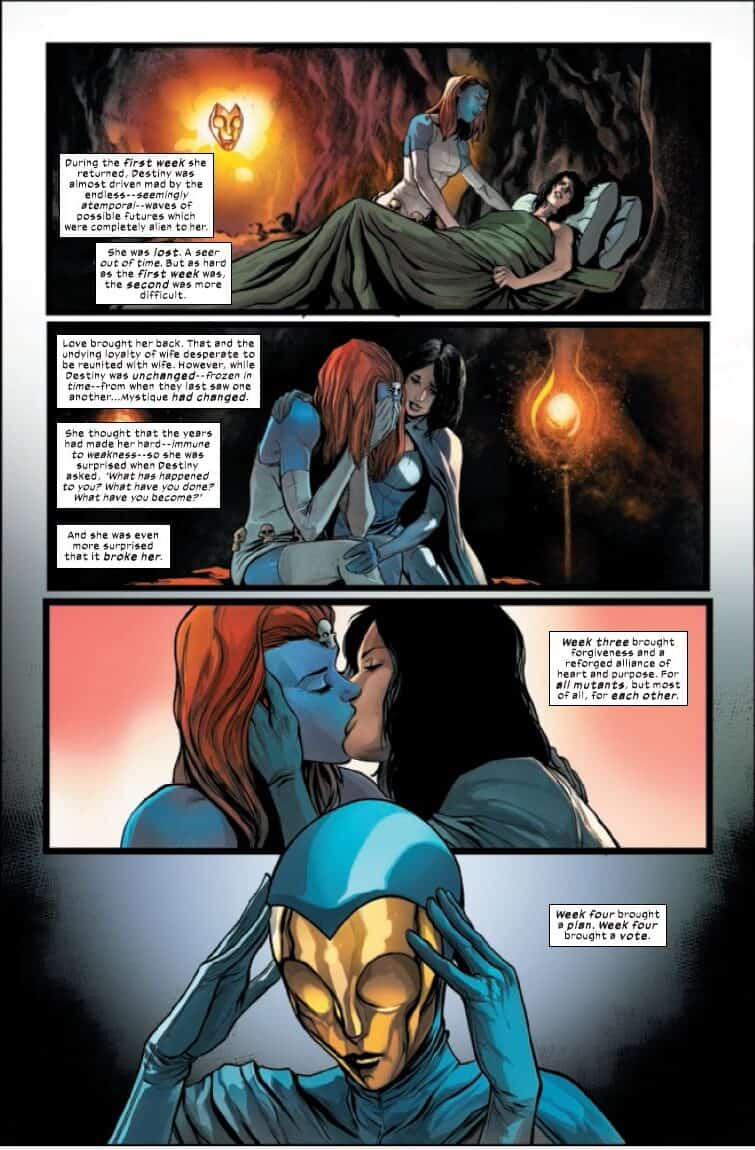 As I already stated, Mystique and the heavy emotion from this character are important aspects of this issue. The art by Stefano Caselli and David Curiel is what pushes this on the panel. As a shapeshifter who has lived an unknown amount of time, Mystique can show whatever is needed. This is clear in her posture and bearing changing depending on which Council member she is seeking to manipulate. But, when it comes to her wife, she doesn’t hold her control. She cries when she should be playing a role. Her defenses crumbles, and she wears her heart on her face when they are alone. And when they are unified against enemies, she is at ease.

Inferno #2 (Jonathan Hickam, Stefano Caselli, David Curiel & VC’s Joe Sabino) delivers on the promise of Hickman’s X-Men #6 in this emotional, powerful, intrigue-filled issue that should have long-lasting ramifications for the X-World.