Infinite Frontier #4: To Infinity, and Beyond 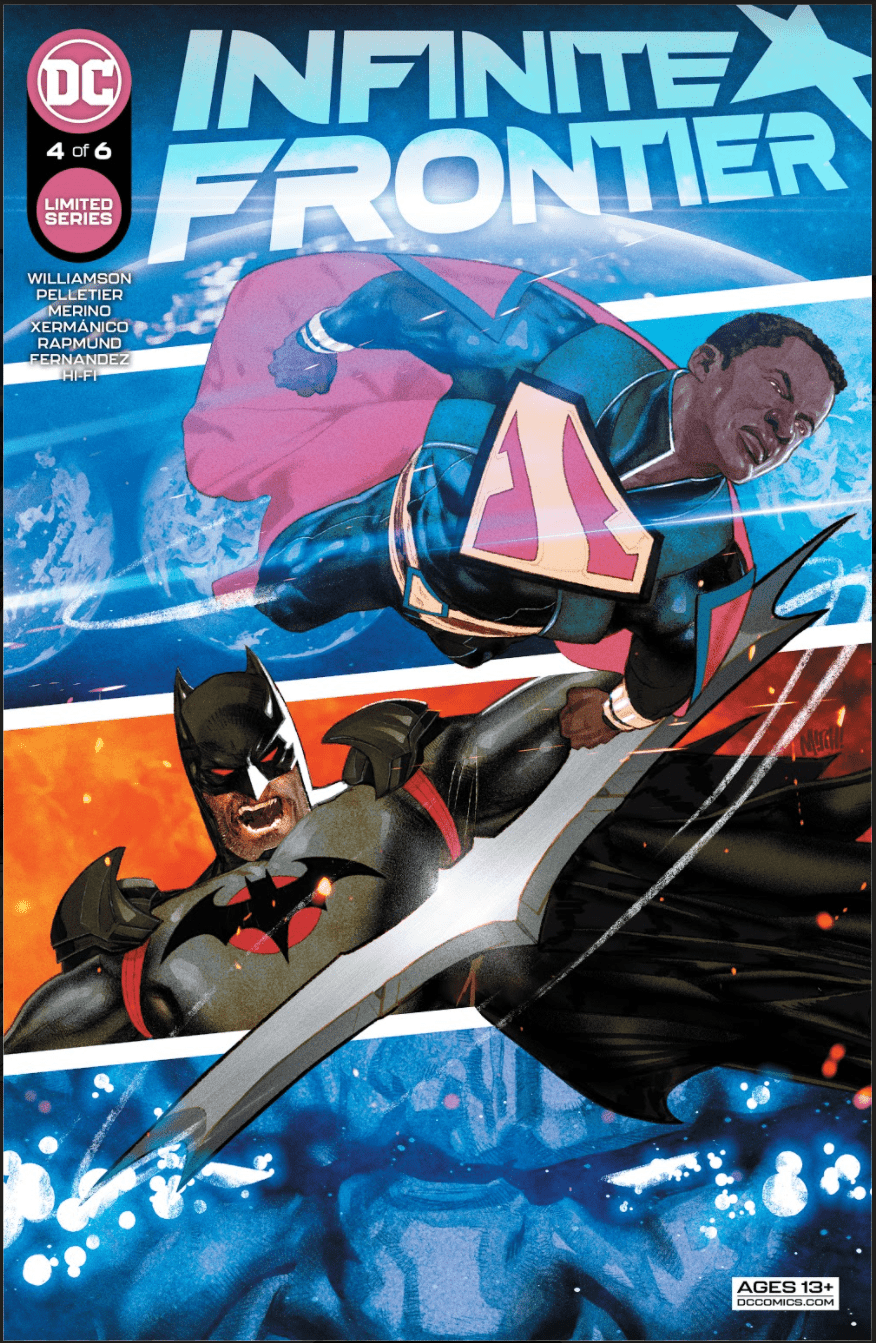 On the bowels of Earth-Omega, a dark plot is afoot.. and the Flash is caught in it. Can the nascent JSA, combined with the Black Lantern Ring-empowered Roy Harper, save the multiverse?

Meanwhile, ANOTHER - yet related - sinister plot unfolds at the House of Heroes, as Earth-23's President Superman and Thomas Wayne lead their own investigation.

Finally - Agent Chase runs headlong into Director Bones' primary mission, and is none to pleased!

The various plot threads of Infinite Frontier finally begin to converge in issue four. It’s been a delicate balancing act to get here – writer Joshua Williamson has had to juggle quite a few balls throughout, but now, the endgame is beginning to come into focus. The previous installments of Infinite Frontier have suffered a bit due to two fronts: One, the idea that Ho-hum, we’ve seen the DC Universe in existential peril a laughable number of times before, and secondly, it’s been a bit difficult to see the bigger picture of what exactly the actual plot of Infinite Frontier is for all of the seemingly-unconnected subplots.

Thankfully, though, everything is losing its opacity, and the contours of the mystery are becoming clear at last. It’s temptingly easy to lump Infinite Frontier in with, say, Zero Hour, Dark Knights: Death Metal, Convergence, or any number of other crises that have befallen the DCU in the past three-and-a-half decades, at least on the surface. And while there are obvious similarities, Infinite Frontier is revealing itself to be operating as a cosmic-level mystery to solve rather than yet another “oh crap everything is at risk yet again [insert eye roll]” DC event miniseries.

Williamson should also be given a tip of the hat for not including the standard players: No Clark, Bruce, or Diana; no JLA; no Lex to twirl his mustache from behind the scenes. Instead we get President Superman Calvin Ellis, Thomas Wayne, the House of Heroes, bits and pieces of the JSA, a skeleton in a suit, and the star of a beloved but all-too-brief ongoing series called Chase from over twenty years ago. Not exactly the A-listers. And yet… it works. One of DC’s greatest strengths is that it has an incredibly deep bench of what some would call B- and C- and… well, Z-listers; that’s thanks in part to both a multiverse of wild a wooly creations but also a side effect of its universe being inorganically patched together via the acquisition of competitor publishers and their characters over the decades. The net result is a surplus of awesome toys that seldom if ever get played with, each one skillfully chosen by Williamson to fit a specific role in his narrative. And while the road forward for Infinite Frontier is far from a sure thing just yet, its stubborn insistence on giving largely-sidelined characters their time to shine is indeed commendable.

Normally, having three different artists might be detrimental to a story’s page-to-page flow, but in this case, Xermanico, Jesus Merino, and certifiable industry legend Paul Pelletier pull it off with aplomb. Their styles are noticeably different, yet never really clash even with different inkers thanks in no small part to Hi-Fi’s lush coloring and the ever-reliable Tom Napolitano’s letters. I’ve always been a fan of Pelletier’s soft lines; once you’ve seen one of his faces, you know it’s his art any other time you see one. Xermanico is on some next-level pencils all across the board; his career is relatively new but he’ll be the next Bryan Hitch before you know it. And all-star utility player Jesus Merino never disappoints.

All of these various talents (I’ve neglected to mention inkers Norm Rapmund and Raul Fernandez, but their work is chef’s kiss) coming together for one issue can be a recipe for a jumbled, incoherent mess. Thankfully, that’s not the case here. Williamson clearly has a game plan – and now that it’s starting to come together, Infinite Frontier is proving to be that much sweeter.

Infinite Frontier is beginning to gel its narrative at last, as all the various plot points begin to entwine. If you've been holding off from this comic due to it seeming to be yet another DC multiversal crisis, now's the time to check it out. Especially given that final page...

Infinite Frontier #4: To Infinity, and Beyond