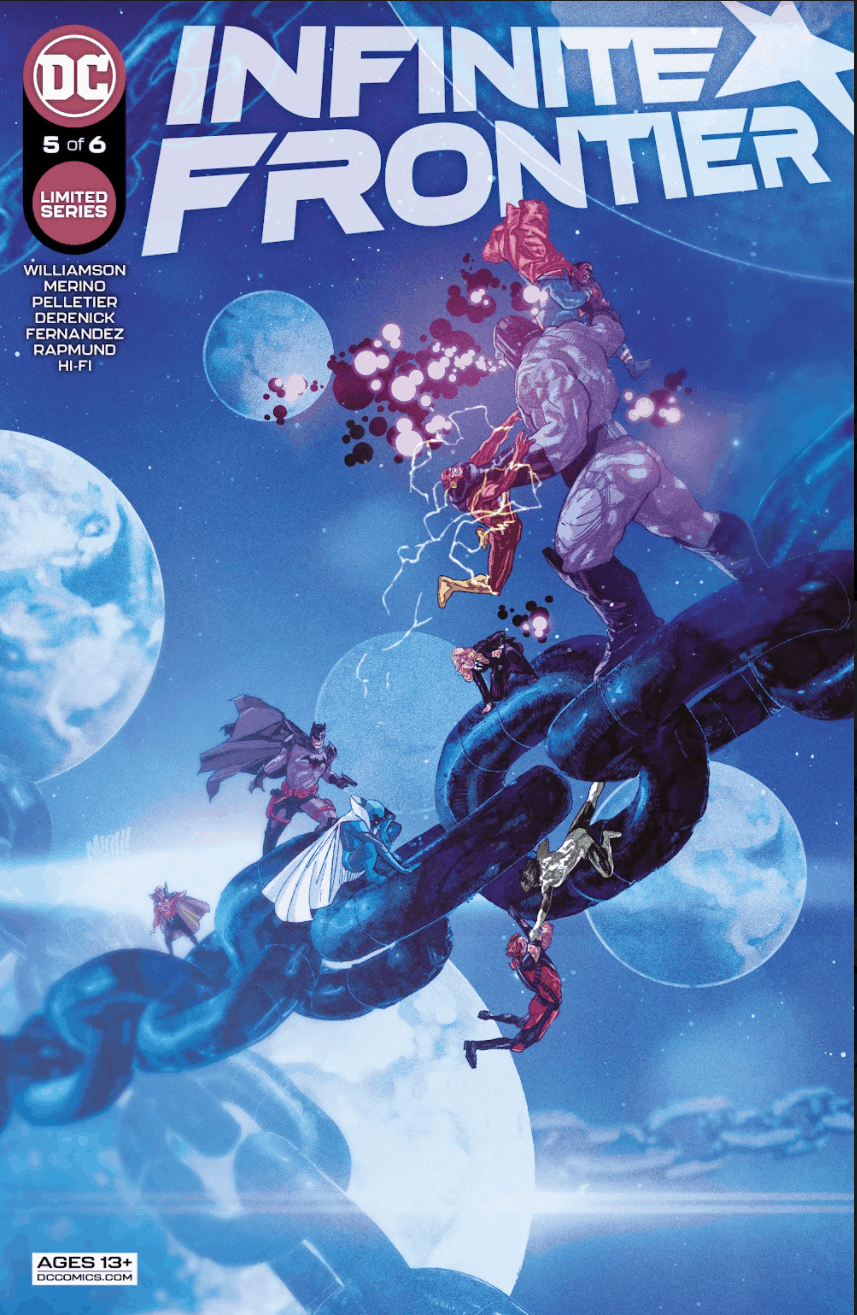 At long last, the myriad mysteries of the Infinite Frontier come together... and boy, are the good guys in trouble!

Yarr, there be spoilers ahead, mateys! – Psycho Pirate

Writer Joshua Williamson at last brings together Infinite Frontier‘s multiple plot threads in this miniseries’ penultimate issue, and does not disappoint. While not quite operating on a Snyder or Morrison level of meta-narrative, he’s nonetheless playing that same game. The revelation as to what is going on — exposited with mad glee by the Psycho Pirate — hearkens back to Crises past, using them to make a pretty valid point about the ongoing, in-flux state of DC’s metaverse.

How would it feel if your world were constantly a pawn in some nigh-unfathomable cosmic chess match? And how would you further feel if you learned that a single Earth was always at the center of it? Now you know how Psycho Pirate’s Injustice Incarnate feels, and why they’re willing to throw their lot in with someone as evil as Darkseid to protect their world. And while that’s despicable in its own right, Williamson is a canny enough writer to prod the reader into realizing that these misguided heroes aren’t wrong for feeling the way they do. They’re just taking their convictions too far. And that in and of itself will almost certainly lead to their tragic downfall.

There are a lot of great fan-service moments, too, like the reunion of Alan Scott, Obsidian, and Jade, or Power Girl’s callback to Psycho Pirate’s gruesome demise at Black Adam’s hands in Infinite Crisis. Roy Harper’s subplot involving the Black Lantern ring comes to an abrupt, if not completely unexpected end; it’s unlikely his part in the story is truly over as there are still a lot of unresolved threads but this certainly felt like it had finality. Story-wise, my only real complaint with this issue is last issue’s cliffhanger really went nowhere this installment.

The triple-threat art team of Paul Pelletier, Tom Derenick, and Jesus Merino flow together seamlessly. Pelletier, in particular shines: the man has been in the game for over thirty years and I don’t think he gets the due respect he deserves. Pelletier’s work has always had a strong, can-do-anything workmanlike quality to it that looks good no matter what characters he’s drawing. And Williamson is asking his artists to draw some pretty wild stuff, and they all succeed. Heck, Merino is tasked with pulling off a deft Superman homage with Calvin Ellis, and pulls it off in such away that evokes the original while retaining a power all its own. Add seasoned pro Norm Rapmund and Raul Fernandez on inks (as well as Derenick inking his own work), the untouchable Hi-Fi on colors, and the unstoppable Tom Napolitano on letters, and you have one slick-looking book. There’s always a worry with jam books like this that the different artists’ styles won’t mesh, but that isn’t the case here. Williamson has clearly become DC’s go-to writer, and it’s on a book like Infinite Crisis where he’s proving he has the chops to take the reins from Stalwarts with names like Johns, Morrison, Snyder, and Rucka. Now that DC is letting him rip with such a big, impactful project like this — and his Batman run now on the horizon — it’s intriguing to see what he does next.

Infinite Frontier #5 moves the needle forward on what the post-Death Metal DCU looks like, and it's rife with meta-commentary that has, at this point, become as much a part of DC's history as has its heroes. There's a slight feel of repetition at this point to DC's conveyor belt of crises, but it's obvious that this series has an intentionality and deliberateness to it that proves DC isn't just spinning its wheels. What does its future look like? Infinite.