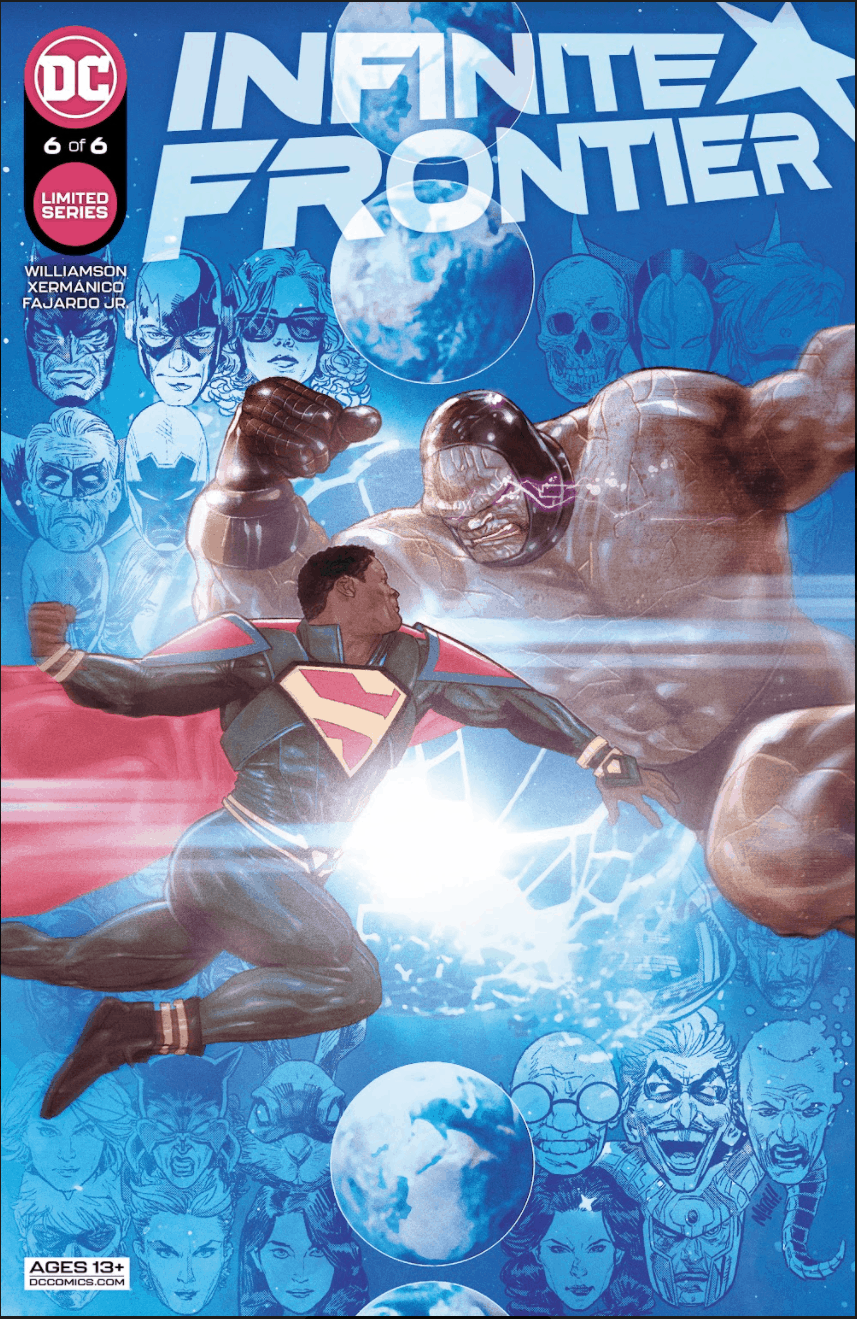 Darkseid is about to take control of the entire omniverse! Can the combined might of the Justice League Incarnate stop him? And what will the final fate of the Flash be THIS time?! 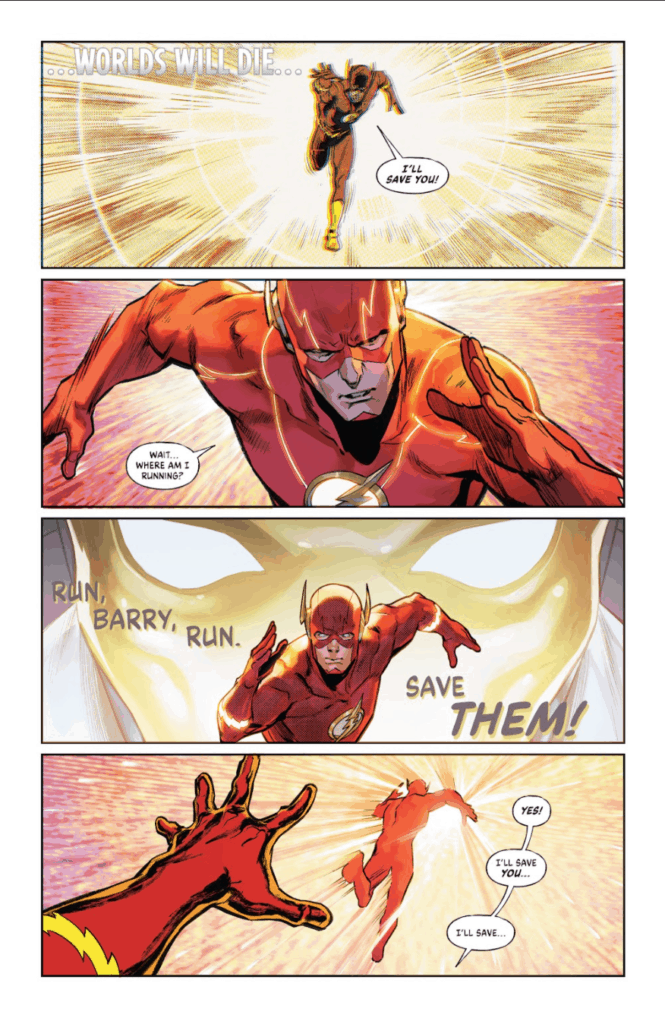 In the final assessment, Infinite Frontier isn’t yet another crisis in a seemingly endless parade of DC crises. Rather it’s a comic about the cumulative effect of those crises on the DC universe (ahem, omniverse) on the people dwelling within it. Don’t get me wrong, this isn’t some man-on-the-street Astro City riff. It’s very much about superpeople punching each other on distant worlds with The Fate of Everything hanging in the balance. But rather than trying to reinvent the wheel yet again, Infinite Frontier takes a look at the net impact of all that sturm und drang on the various denizens from across a multitude of worlds.

Does it succeed? At least superficially, yes. It’s hard to say at this point whether or not Infinite Frontier has the legs to stand the test of time or will be forgotten once the next event comic comes along (which is most certainly set up in the final pages). But as a work unto itself, and a forebear for November’s Justice League Incarnate ongoing, it’s been fun, if nothing else. Writer Joshua Williamson has clearly been having a blast mixing and matching the miscellaneous debris from across the omniverse and letting all these variant action figures whomp on each other. And why wouldn’t he? Calvin Ellis, Thomas Wayne, Captain Carrot… through the very virtue of their existence as alternate versions of the heroes we know and love, by default writers can do whatever they want with them, things they could never get away with regarding the “real” Superman, Batman, et al. Which means anything goes, and nothing is sacred.

With the set up for the Justice League Incarnate out of the way, Williamson also sets the stage for the JSA’s triumphant return (first foreshadowed in the Stargirl Spring Break Special). As an old school Justice Society fan, there are really no words to describe how ecstatic the team’s return makes me. Alan Scott, Jade, Obsidian, Atom Smasher… these characters are part of one of the richest traditions (if not the richest) in the DCU: legacy. By tapping into that, Williamson shows he understands the fundamental underpinnings of what makes DC great. And by threading the needle between legacy and the omniverse in Infinite Frontier, Williamson shows that legacy can extend to other worlds, too, enriching what the term means for DC as a whole. This is the subtext that makes Infinite Frontier more than a mere curio and something that perhaps one day will be seen as a crucial piece to the constant redefining and recontextualizing of the DC Universe.

Or maybe not. The vagaries of the modern comics industry mean that what seems crucial now is too often forgotten within a year or less. Time will tell.

Regardless of Infinite Frontier‘s eventual fate, nobody will ever be able to accuse its sixth issue of being a drab affair. On both pencils and inks, Xermanico proves why he’s one of DC’s most in-demand artists. The man is tasked with drawing a wide array of high-minded beautiful nonsense, from magic space chains to Darkseid to a rabbit in a spandex super-suit to a chain-smoking skeleton in a three-piece suit. And he pulls it off in such a way that makes it look easy: 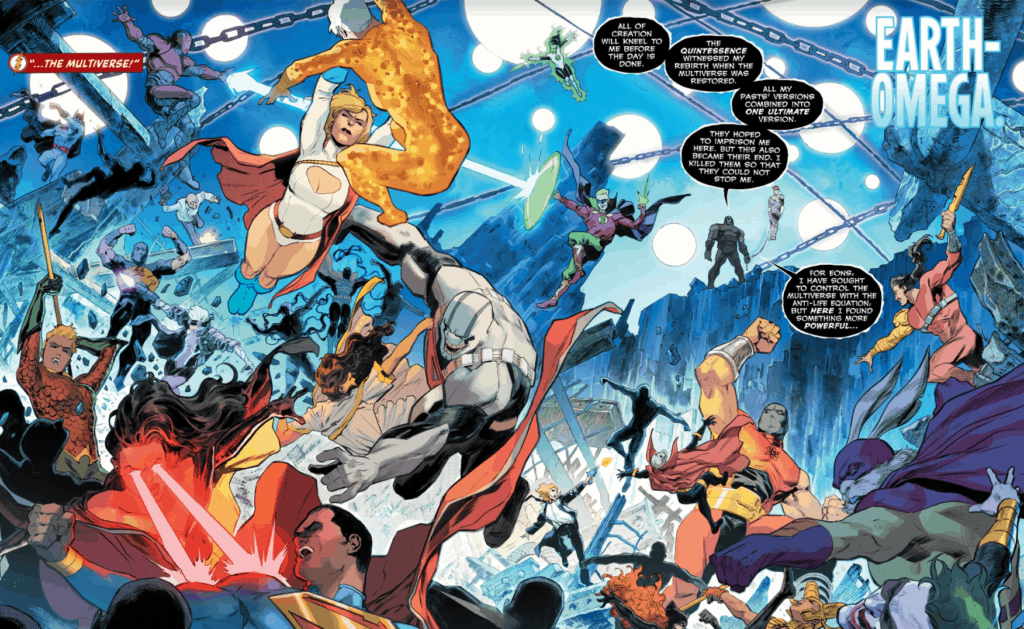 Xermanico is colored by frequent partner Romulo Fajardo, Jr., and the results are spectacular. Fajardo has a way of making brights pop even more by setting them against muted backgrounds, and although the world of Earth-Omega calls for that by design, the effect works brilliantly nonetheless. My only real qualm with the art is that Darkseid doesn’t look like quite the force of nature he’s supposed to be. Imposing, sure, but not quite “the tiger-force at the core of all things.” 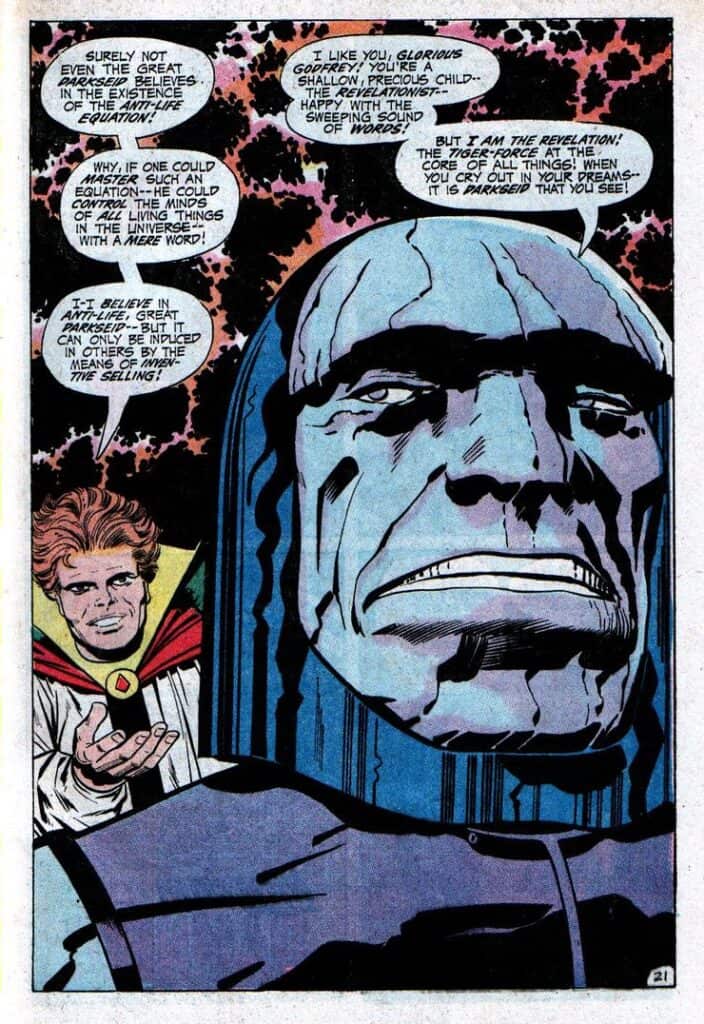 When Jack Kirby created Darkseid, he understood something fundamental about the character: he isn’t a brawler, or a cackling supervillain, or some petty schemer. Darkseid simply is. He’s a force of nature, and should always be presented as such. It’s not that Williamson and Xermanico do a bad job with Darkseid, but as was the case with his Justice League Odyssey, Williamson treats Darkseid more like he’s writing Thanos, who is in fact more a demigod of action than Darkseid. Writers often conflate the two characters because one begat the other, but beyond that, they couldn’t be more different. Hopefully, Williamson rectifies this minor error moving forward with Justice League Incarnate.

Infinite Frontier #6 audaciously threads the needle between the rolling multiversal nature of the DCU and its other cornerstone, legacy. As the omniverse becomes more and more important moving forward, this will likely be seen as a bellweather for things to come.