Save the World (Injustice 2 #33 Comic Review) 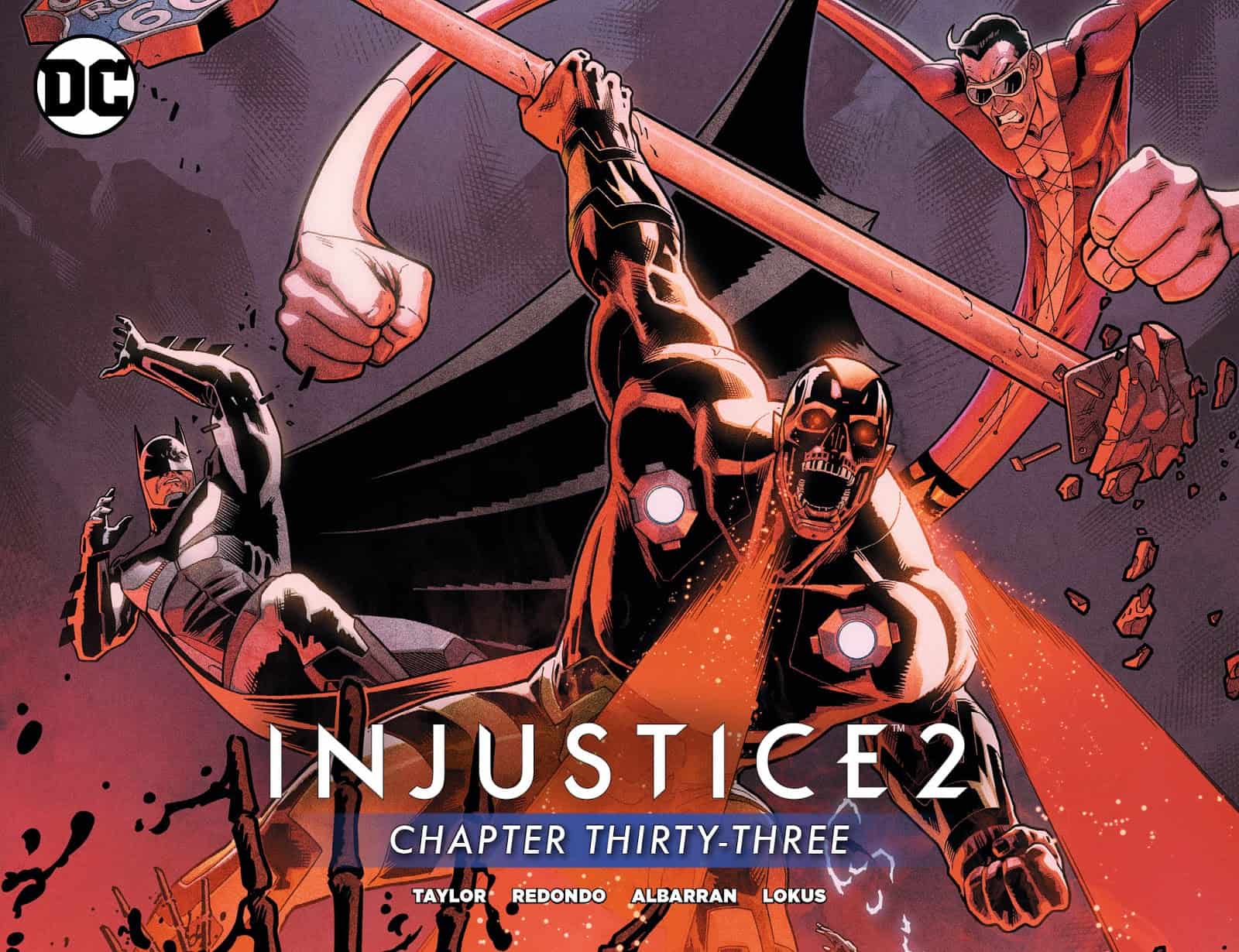 Without the Joker’s influence, Harley Quinn has become one of Batman’s most trusted ally. With her daughter now safe from harm’s way, it’s time to return to what counts for normalcy.

Before the events of the original Injustice, Harley Quinn had a child with the Joker. A daughter named Lucy, who she gave away to spare her the lifestyle she lived. Years later, Lucy alongside the children of Black Lightning, Green Arrow, & Black Canary are captured by Ra’s Al Ghul. Thanks to Batman and his team they’re able to free the children but not before causing numerous species of plants and animals to go extinct in the process.

Having saved her daughter Lucy from Ra’s Al Ghul, Harley Quinn takes her back to her adopted mother Delia. Delia asked why Harley didn’t contact her sooner only to get the abridged version of everything that happened to her since Injustice 2 started. 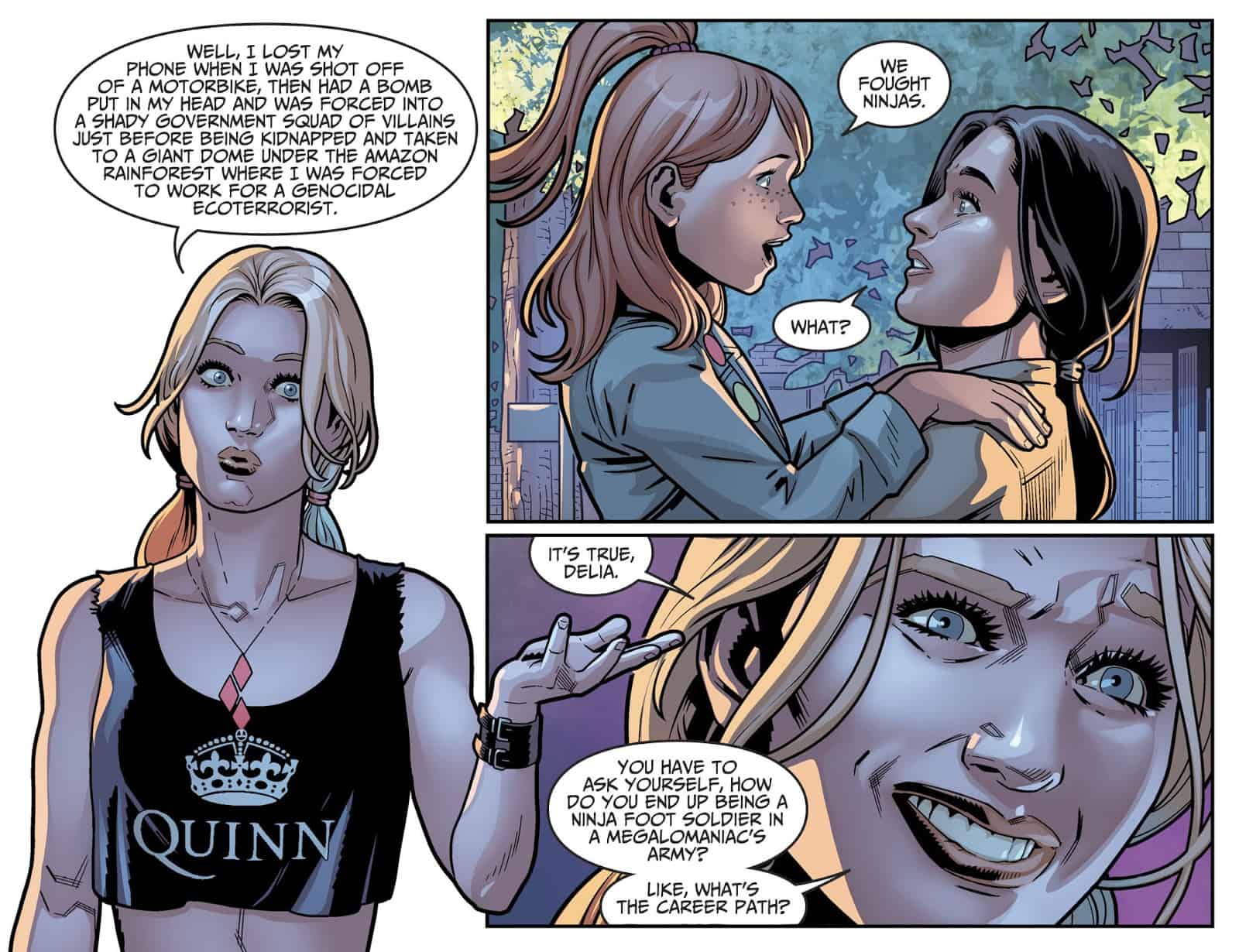 Harley prepares to leave when Delia asks where she’d go. With the Quiver, Injustice 1 Green Arrow’s hideout she had been living in since his death, taken by the new not dead Green Arrow she plans to return to her old apartment. Lucy prepares to say her final goodbye knowing it’d be far too dangerous for her to see Harley again. But Harley shoots that notion down saying she’s going to keep visiting her. That she wasn’t giving up on her like when she was still under Jokers thumb.

The scene shifts to a secret lab beneath Gorilla where Ra’s Al Ghul checks in on Professor Ivo who’s working on a still incomplete AMAZO. Ivo notes this fact but Ra’s doesn’t care how incomplete AMAZO looks so long as he functions. Gorilla Grodd doesn’t trust AMAZO since he can’t mind control it. But when Ra’s says AMAZO will obey his command, Grodd brings up his previous failure that destroyed their base and numerous endangered species. Athanasia, Damian’s sister, threatens Grodd to put Ra’s down but Grodd doesn’t care. Ra’s is under the protection of Gorilla City’s king Solovar, but without him around Grodd can do as he pleases. Only for Solovar to appear and reprimand the general. Both verbally and by mentally forcing him to drop Ra’s. Solovar asks if AMAZO is ready but once more, Ivo says he hasn’t finished AMAZOs outer shell. Ivo is cut off before he can continue to say what was possibly wrong by Solovar who states AMAZO isn’t a he and is just a tool. Ivo relents saying he can be used to fight and activates the mechanical tyrant. 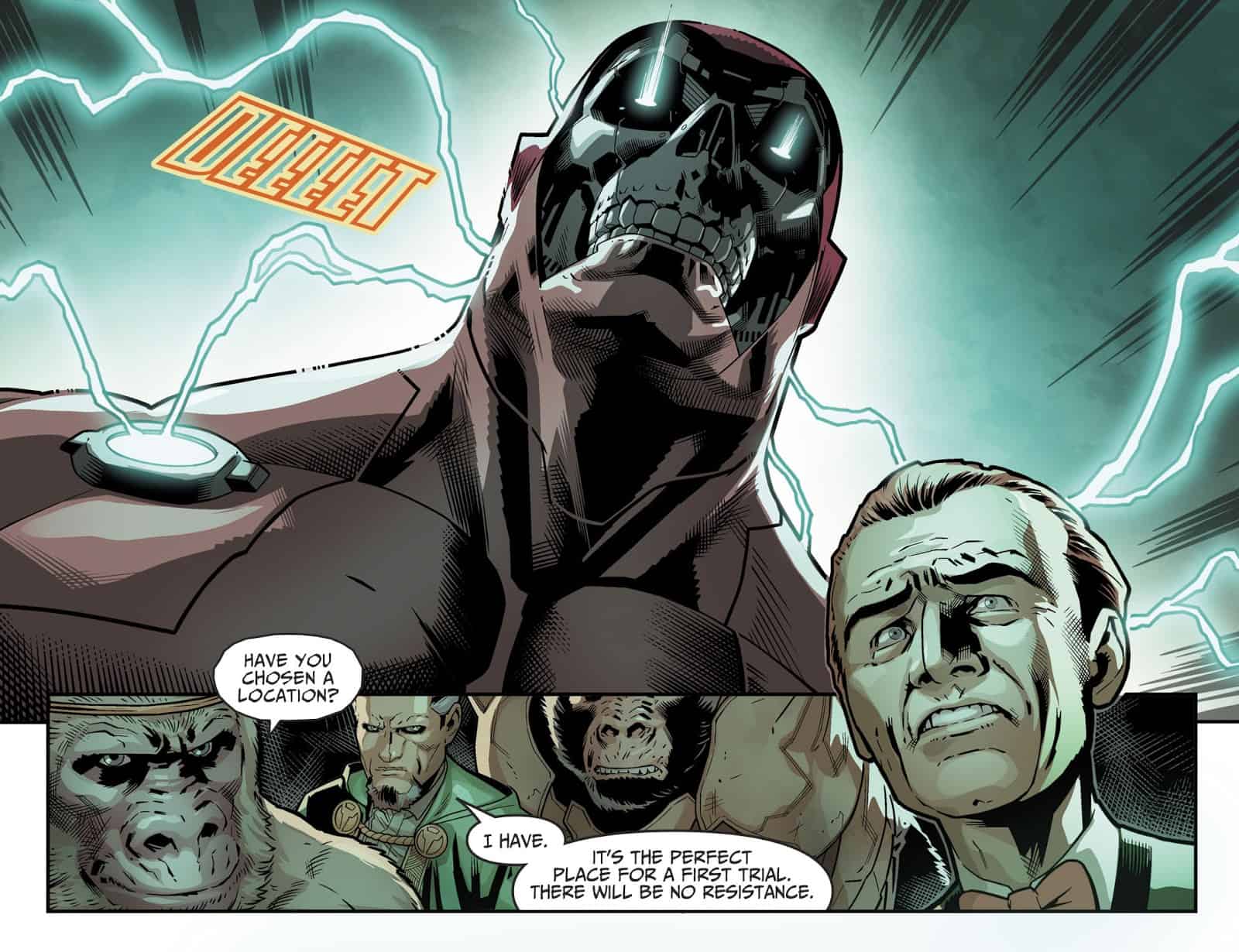 The scene shifts back to the Bronx to Harley Quinn’s apartment she shared with her on-and-off again lover Poison Ivy. There Poison Ivy is lamenting that the plants are dead in the apartment. Harley apologizes for not being there to tend to them for quite some time. A sentiment Ivy seems to share. She says all the plants are dead once more, that Ra’s had saved many plant species only for them to be burned away. Harley apologizes but the pair gets into an argument. Ivy doesn’t want to fight Harley but Harley won’t stand idly by while she kills people. Ivy asks Harley if they can pretend for one night that they aren’t the reason for the others suffering and Harley agrees. Ivy wakes up in the middle of the night and leaves but not before reviving the plants in their apartment for Harley as a parting gift. 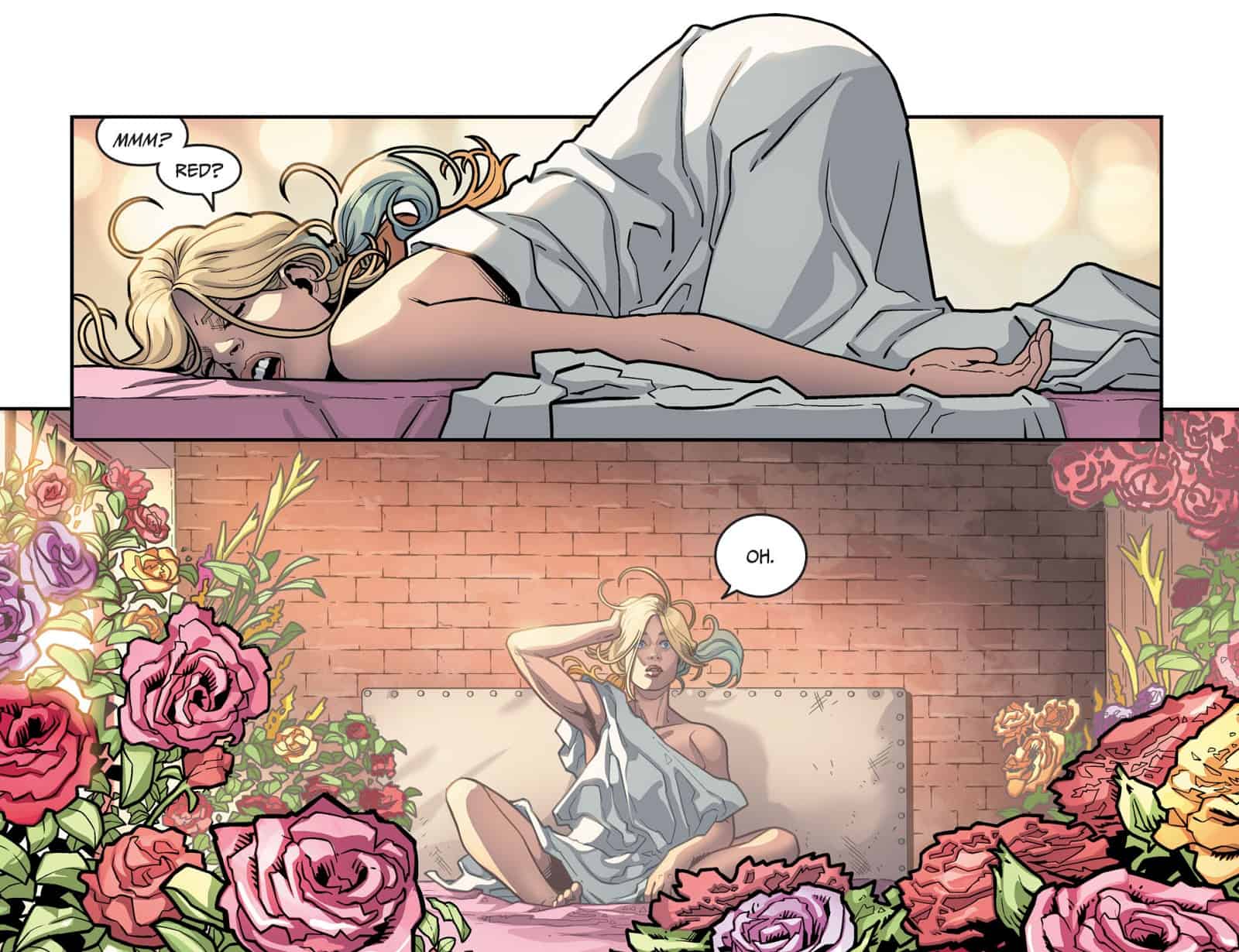 Tragically, Arizona has a far less beautiful sight to awaken to as AMAZO arrives. Literally landing on top of a poor man cooking a barbeque before he begins razing the town… 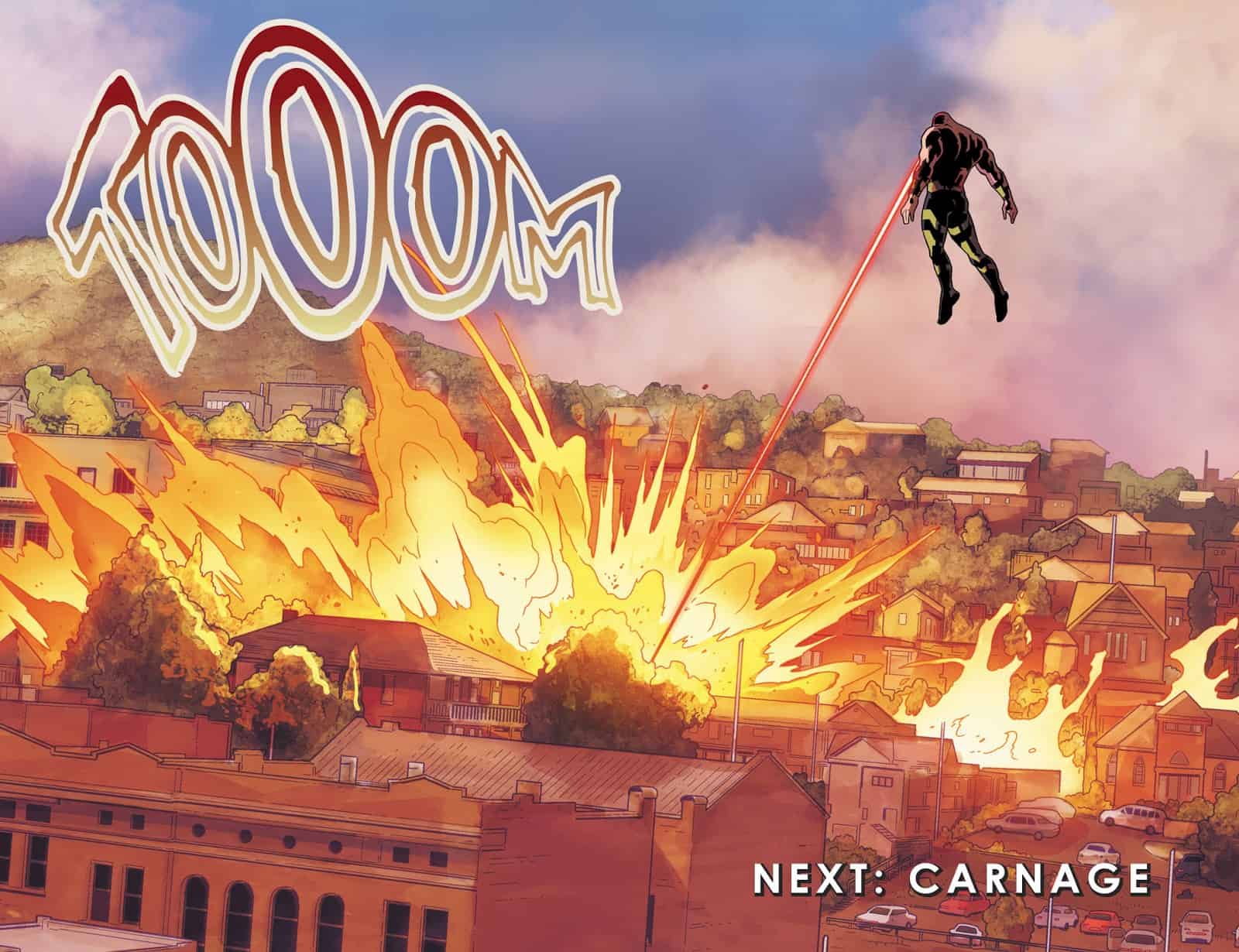 It was a Harley heavy chapter but honestly, that was a good thing. She’s been one of the best and most interesting characters in the Injustice comics. Courtesy of having a majority of her time shown without Joker around to bring her down. They made a point showing how much she regretted leaving Lucy in the original Injustice comic to save her from Joker, so seeing Harley return Lucy to Delia but on a much more positive note was sweet. Harley somewhat reconciling with Poison Ivy was also nice given the times their relationship has been referenced throughout both comics. AMAZO finally makes an appearance as does Professor Ivo and Solovar which has me very intrigued by what will happen next. AMAZO has always been an extremely heavy hitter but now most of the heroic big guns are either dead, evil, or in prison. I want to see what they actually can do to stop his rampage.

Final Thought: It’s nice seeing a return to the main plotline while making more callbacks to the past. There wasn’t much action but the emotional content made up for it. A trend that Injustice has used to great effect a number of times. Seeing AMAZO excites me just to see how he’s handled. Maybe it’ll be like the magic arc in Injustice 1 and they’ll use an obscure character to help resolve it. Or you know…tons of people die horribly before he’s finally stopped.