Invaders #10: Tangled Up in Blue

Captain America and Winter Soldier have been temporarily turned into Atlanteans so they can infiltrate Namor's stronghold undetected!

They're on a rescue mission to retrieve an unexpected captive, but also discover all-purpose evil corporation Roxxon is up to no good in Atlantis, too. Namor, reeling from the revelation that Machan has not only escaped his mind and inhabited someone else's body thanks to the Serpent Crown, charges up to find Roxxon goons instead.

While Namor is distracted, Machan makes his move to usurp the king...

As it turns out, the Roxxon assault was just a diversion from their true goal - to steal the genus compound, that Namor used to turn a town full of landmen into Atlanteans! Cap and Namor both race to the point of origin for the crime, but are about to have a rendezvous with destiny instead! 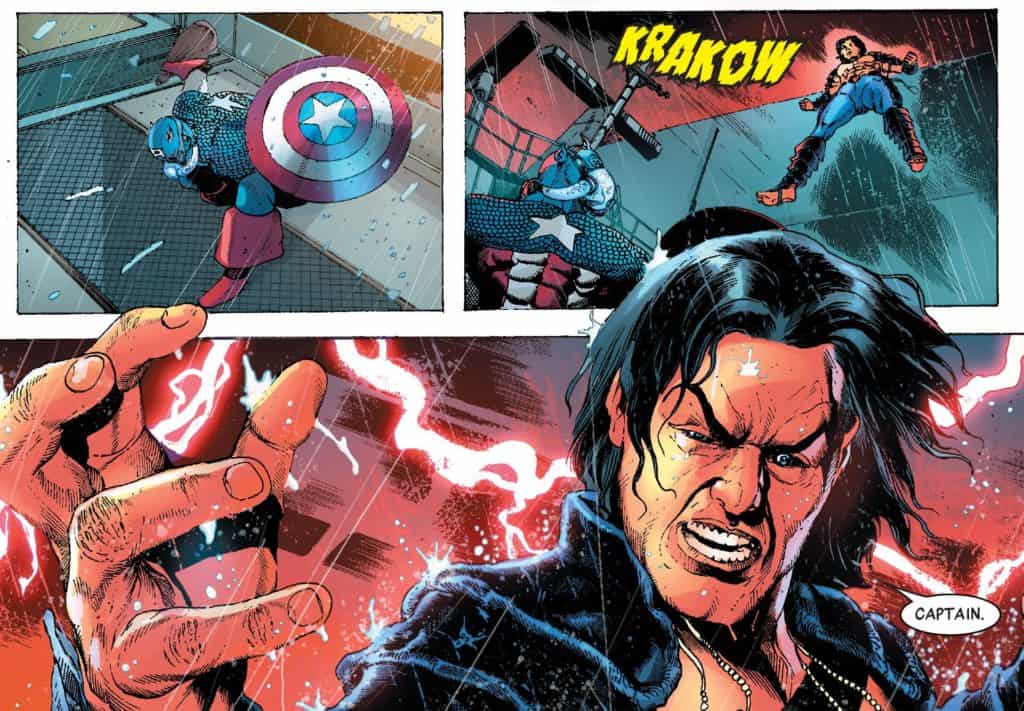 Meanwhile, Machan has been drawn into conflict with Jim Hammond and Toro...

...and it doesn't look good for the fiery heroes!

As Invaders appears to be moving toward its conclusion (if December’s solicits are to be intuited as such, which, given Marvel’s track record with axing books with the twelfth issue and then restarting their numbering the next month, isn’t a huge stretch of the imagination), writer Chip Zdarsky isn’t even remotely letting off the accelerator. The conflict between Captain America and the rest of the Invaders versus Namor continues to be a thrill-a-minute ride, and issue ten is no exception.

Turning Cap and Bucky into Atlanteans is seemingly a fun novelty at first, but then turns into a crucial plot point once Cap has to venture to the surface and can’t breathe without a special device. (A “plot” device, as it were, but cool nonetheless…) It all leads up to an epic confrontation between Cap and Namor (complete with dramatic red lightning for effect!) that gets cut short for reasons I won’t divulge here, but needless to say, the endgame calculus just shifted drastically.

It’s interesting to see the competing philosophies between Cap and Namor, which in a way is what this series has been about from the start. Namor has been the big-picture protectionist guy, willing to do whatever – no matter how heinous – to defend his people. Cap, meanwhile, is willing to risk it all for the sake of his friend’s soul, no matter what heinous thing he does. Big scale versus small. The forest versus the trees. No matter how far gone Namor becomes, Cap always believes in his friend’s inherent goodness, and his own ability to pull him back from the brink. Everyone else is caught in the middle to a certain degree: Bucky will back Cap’s play no matter how much his soldier’s instincts cry out in protest; Jim Hammond and Toro are perfectly willing to go against Cap regardless what he wants. And then there’s Machan: Namor’s id made manifest, willing to destroy everyone in his lust for power. It’s a complicated beast of a story, without a clear antagonist to root against out of the original Invaders, despite the story’s initial set up.

Butch Guice isn’t given much to do this issue; a handful of pages set in 1943 and the bulk of the heavy lifting done by Carlos Magno, who’s aces as usual. Their contrasting styles work perfectly, as Guice’s is more suggestive of an older wartime setting and Magno’s is modern and sleek, heavy on the details in a way that would make Gene Ha or Bryan Hitch proud. (Full confession: as much as I love Magno’s art, I wouldn’t mind an entire issue set in World War II so that Guice gets a chance to shine. It probably won’t happen given the title’s seemingly-imminent departure from shelves, but I can wish, right?)

In the end, the heart of Invaders is Captain America desperately trying to save his friend’s soul. It’s a big, expansive story spanning decades but has a decidedly small-scale narrative at its core. This is perhaps a book that isn’t burning up the sales charts right now (or as well-hyped as Zdarsky’s other red-hot books), but it deserves far more attention – and accolades – than it’s getting.

Invaders #10 continues this title's winning streak, and proves why Chip Zdarsky is one of the hottest writers around right now!

Invaders #10: Tangled Up in Blue