Invaders #3: …And Then You Shoot Your Brother 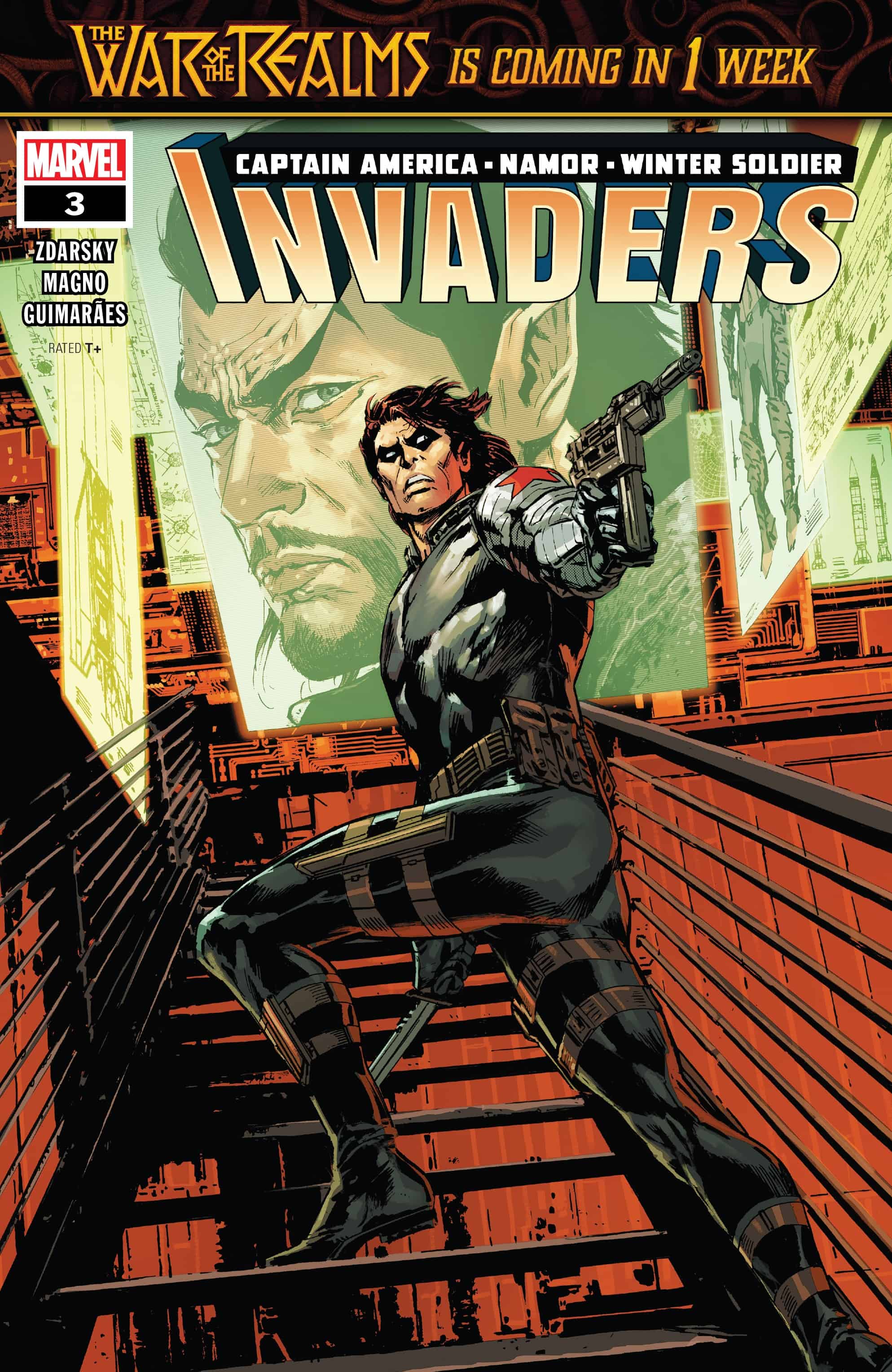 As Namor ups the stakes with his impending war on the surface, Captain America and Jim Hammond race the clock to stop the seemingly-inevitable! With saber-rattling on both sides, the countdown to mutually assured destruction may have already begun. But try telling that to Cap! 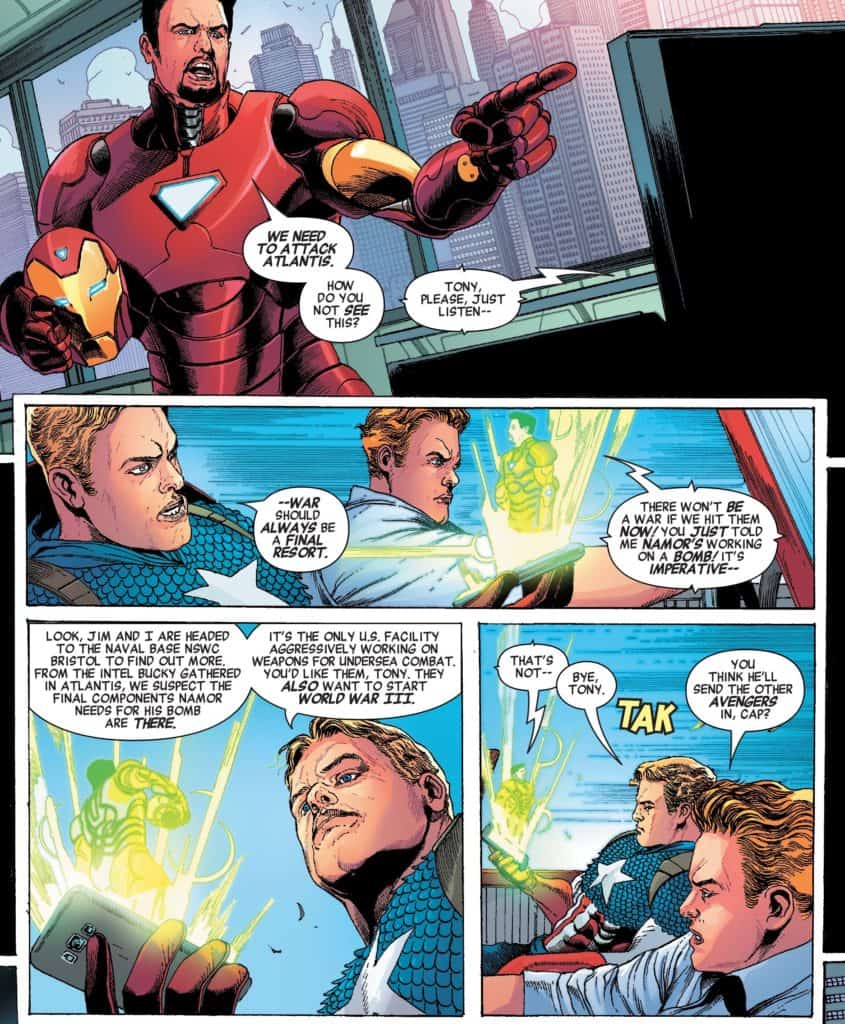 Cap has reason to believe Namor is going to attack the only American naval base currently working on anti-Atlantean technology. Hammond and he sue for a peaceful resolution even as they state the base is about to be attacked, but the response they get is not what they were expecting. 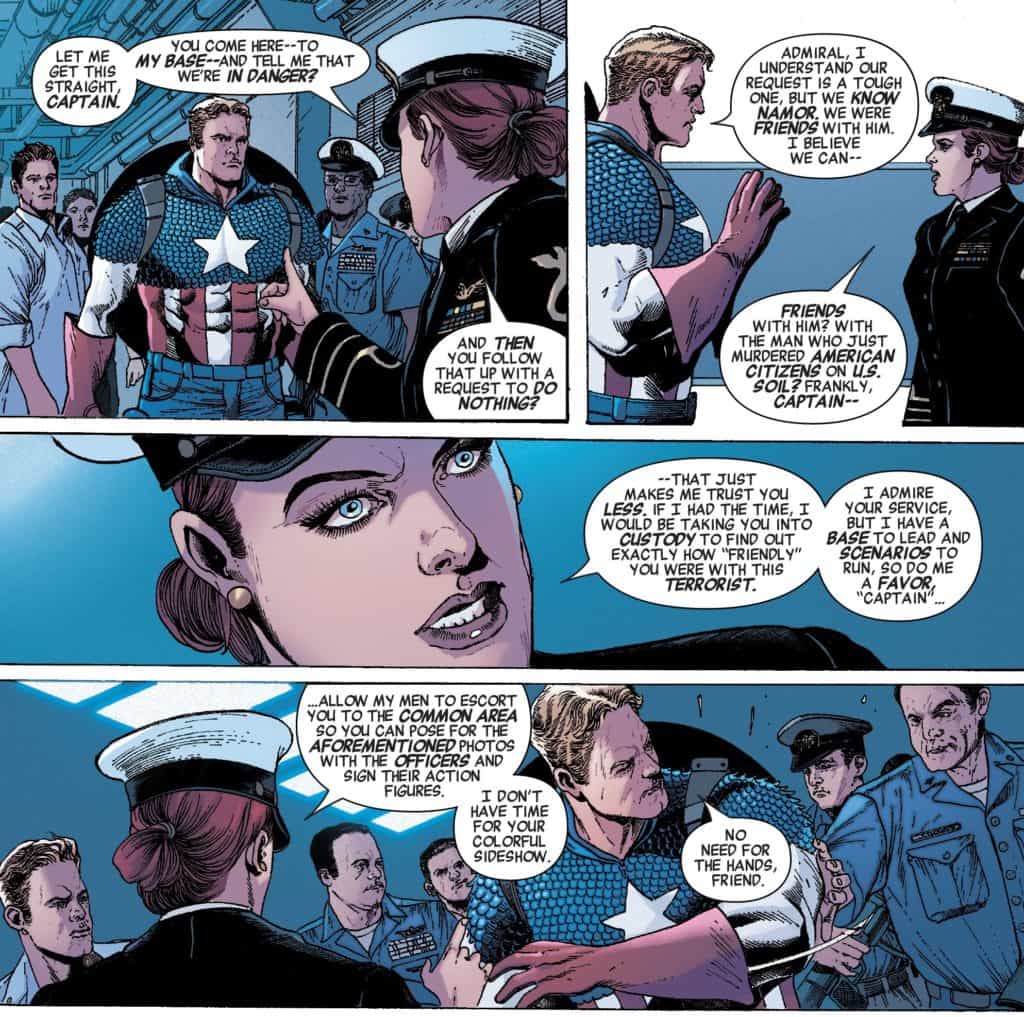 Or was it? Using "the old U.S.O. trick" to distract the naval officers, Cap affords Winter Soldier the opportunity to sneak on-base and steal the plans before Namor can forcibly obtain them himself. 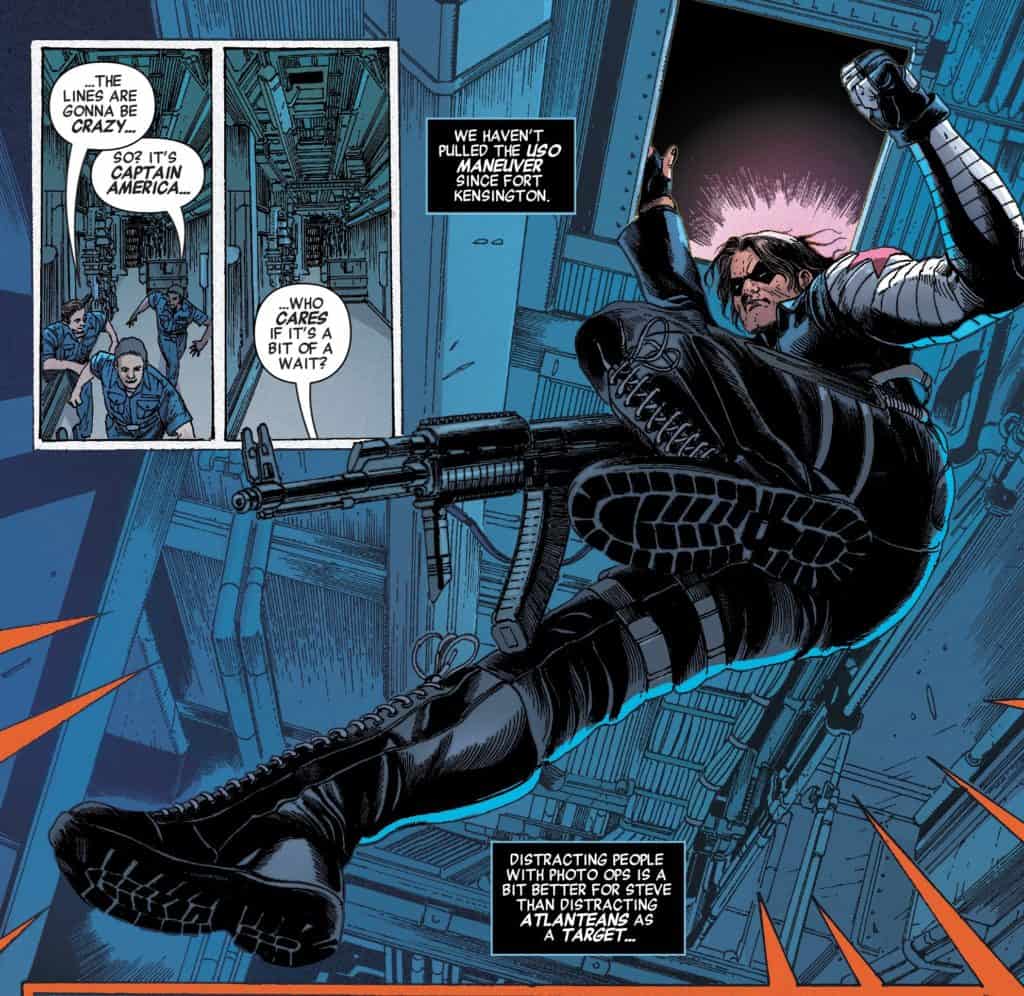 Once Bucky downloads the plans, the trio makes haste and exits. Cap decides it's time to follow up with their old WWII mate Randall (who was particularly close to Namor during the war) to see what he and/or his daughter knows about Namor's declining mental state, as well as his mystery connection to Charles Xavier! 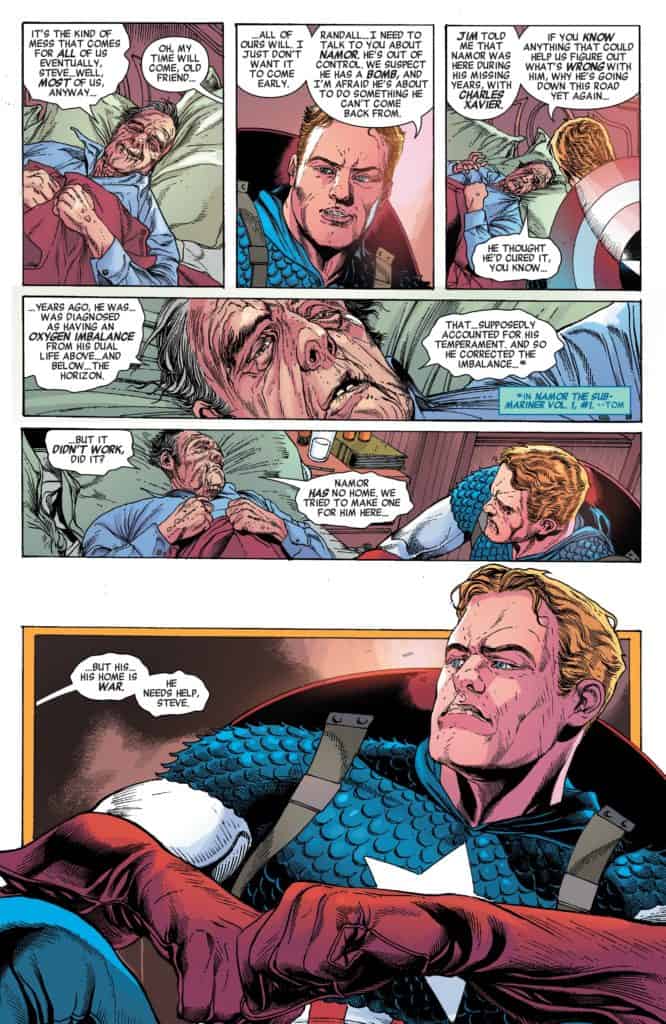 Thank you, continuity gods, for reminding us you still exist.

Below the surface, Namor readies his war machine... 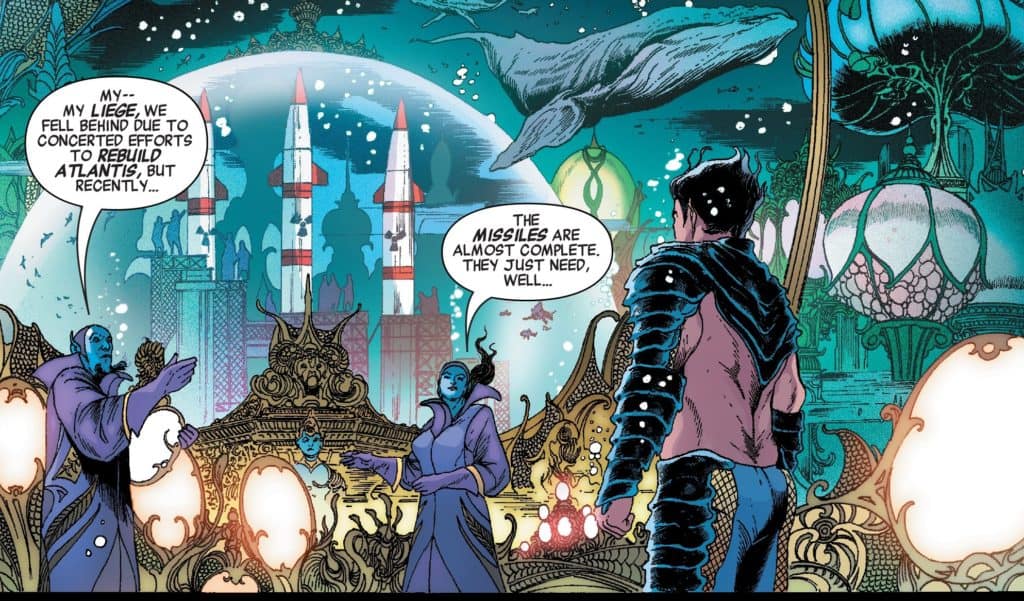 ...Until a clandestine message is received that brings him into direct confrontation with Cap and the Human Torch! 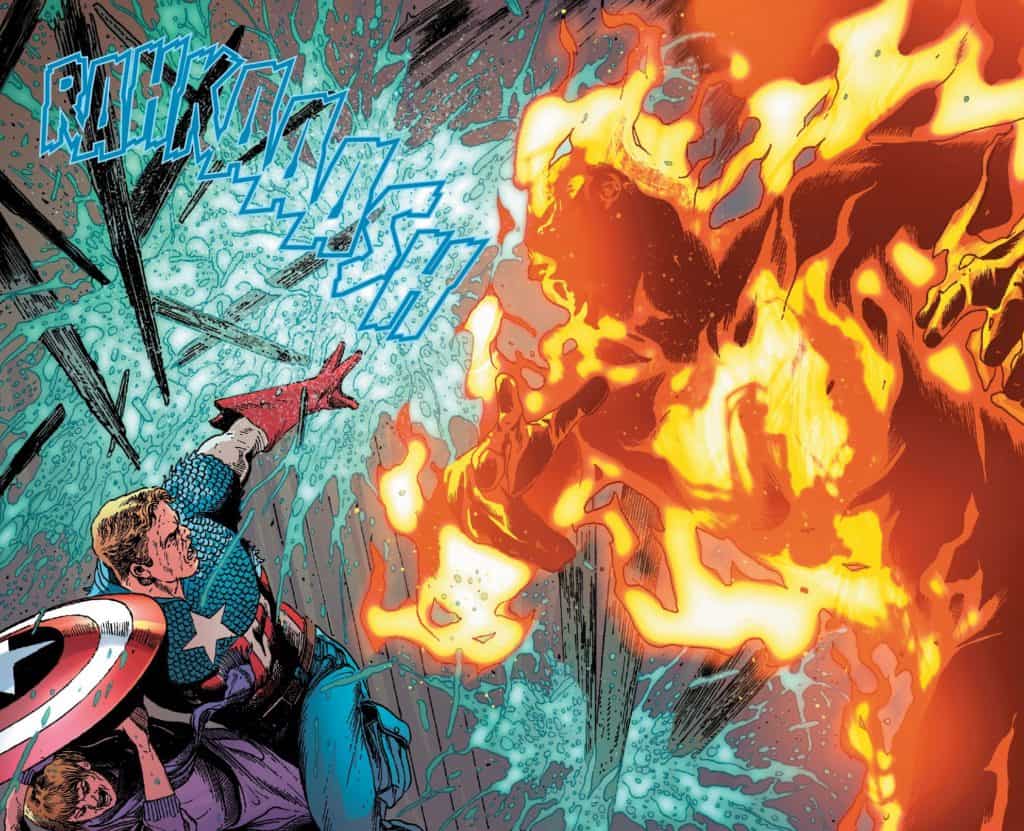 Invaders is an absolute blast to read. With its streamlined cast of characters, it doesn’t take a PhD in Marvel History to grasp what you need to know to enjoy the story, which is broken down thusly: Captain America, the original Human Torch, and Winter Soldier have banded together to save their old comrade-in-arms Namor, who has seemingly gone irrevocably off the deep end. Sure, it helps to have at least a passing familiarity with these characters and their histories together, but Chip Zdarsky is a deft enough writer that you don’t need to have every single past detail to thoroughly enjoy this story.

That said, this issue does feel like it has a little bit of fat that could have been trimmed from the story. There’s an exchange between Cap and a Navy seaman who expresses his distrust that feels out of place in this story (calling Ta-Nahesi Coates!). Perhaps it’s a realistic reflection of what some would feel about Cap in a post-Secret Empire world, but here it seems unnecessary. 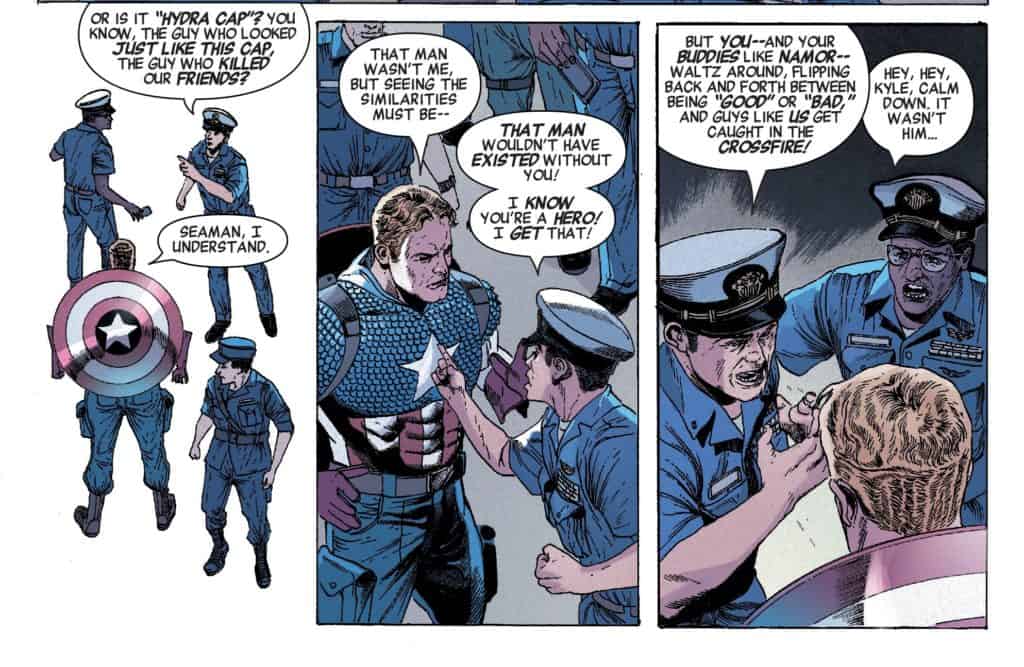 Furthermore, despite its necessity for Cap to use the “USO maneuver” to create the distraction that allows Bucky to steal the specs on the anti-Atlantean tech, the scene itself feels pretty stretched out. One or two panels showing Cap crushed by a throng of awe-inspired autograph-seekers would have gotten the point across just as well. But then, the sequence it’s covering for – Bucky’s theft – also feels dragged out due to a contrived bit of business wherein Bucky’s caught and has to smooth-talk his way out of it. 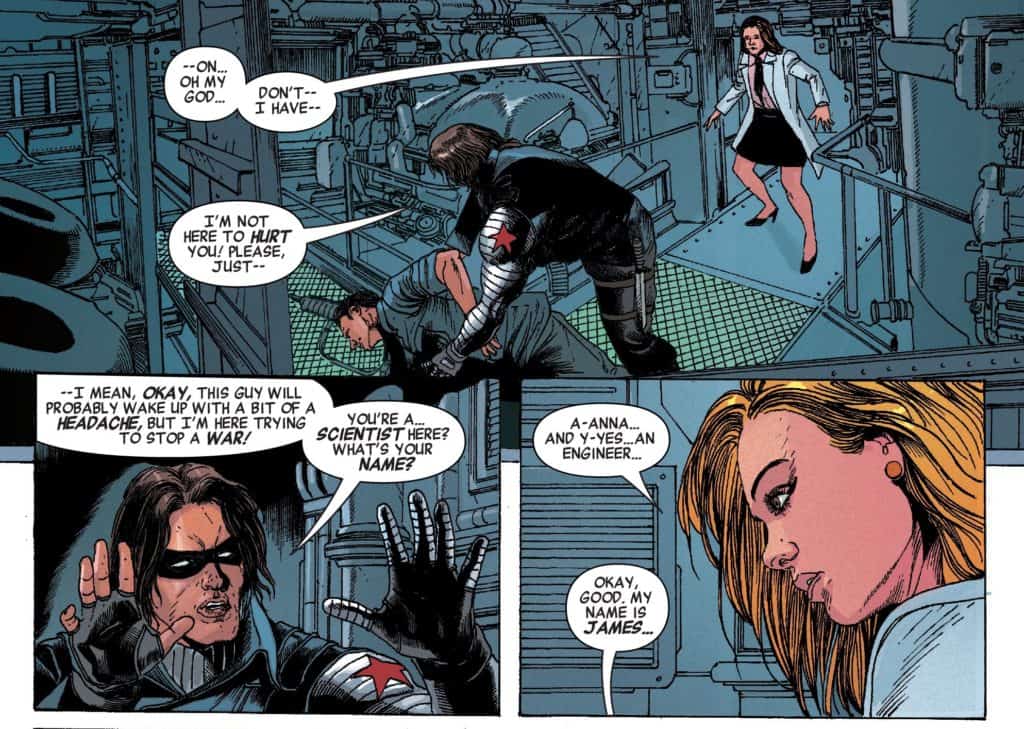 Either sequence on its own would be generally inoffensive, but together are clearly filler for an issue that didn’t quite have enough script to fill its twenty-two pages. That said, I’d still rather read this than superfluous splash and double-splash pages that pad an issue out in far more gratuitous ways.

Everything plays out fairly predictably this issue, almost safely. Zdarsky needed to get his characters into certain positions to move the story forward, and unfortunately this caused some speed bumps in the story’s overall momentum. It doesn’t necessarily add up to a bad issue per se, just a not wholly engaging one. Though a fluffed-out comic written by Chip Zdarsky is still better than nine out of ten superhero comics on the racks.

Artistically, Carlos Magno hit a bit of a stumbling block as well this issue. His figures are extremely well-rendered, but overly much. They tend to be stuck in hard poses rather than in fluid movement. His faces, too, have a certain vacuous quality to their expressions that I hadn’t really noticed in previous issues. Perhaps he was rushed by having to draw this entire issue himself, without the benefit of Butch Guise carrying some of the load? At any rate, his linework this issue resembles an over-rendered Steve McNiven. Not that that’s an inherently bad thing… 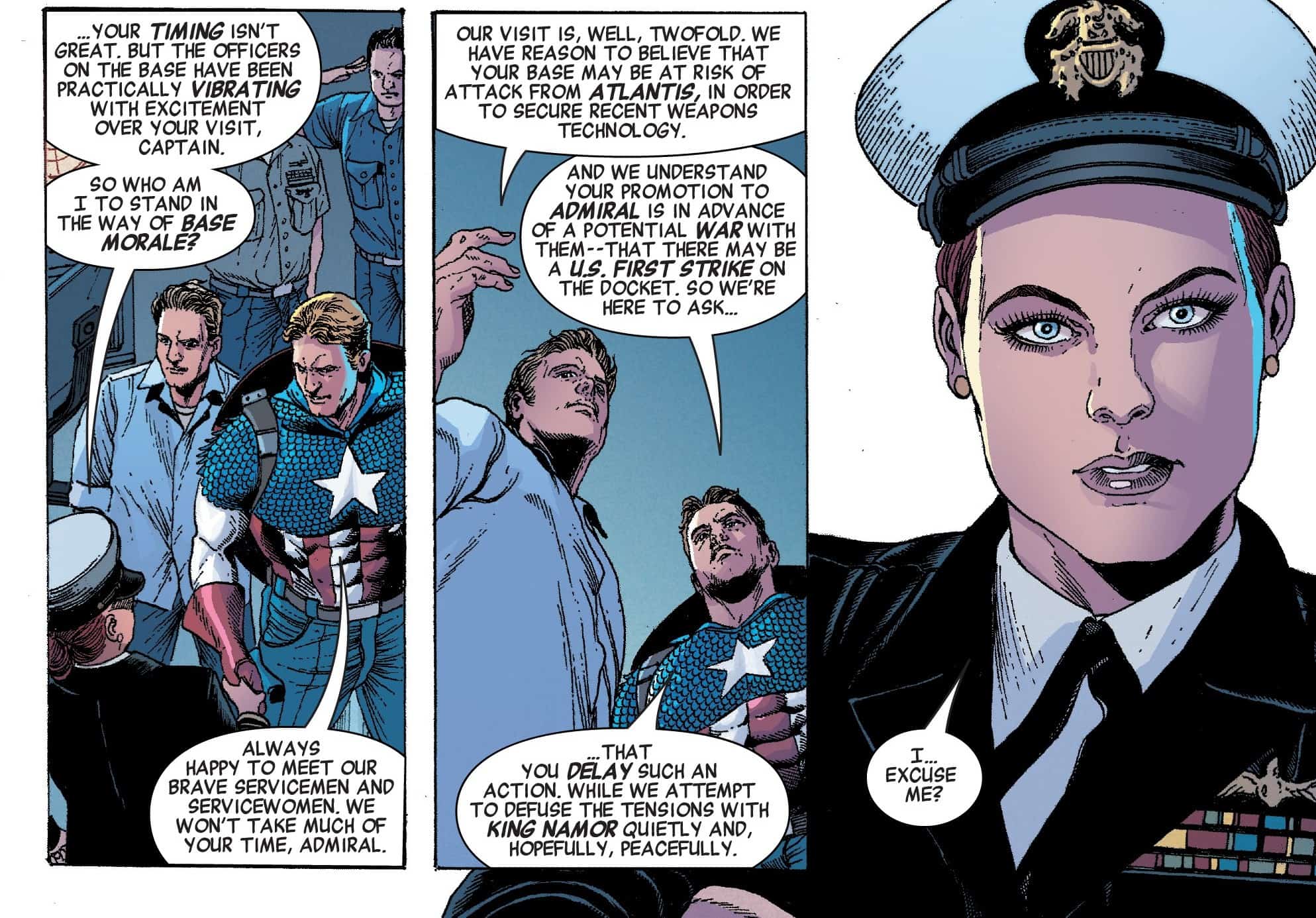 But despite that, the art still jumps off the page, with crisp, strong inking and colors that pop. Though sparse this issue, the underwater sequences are particularly breathtaking – you’ll find yourself poring over them, looking at all the lush detail.

Although the story's momentum stalls out slightly this issue, Invaders is still an extremely well-made book that deserves a wider audience. The Invaders may never be the Avengers in terms of popularity, but with a comic this strong, they don't have to be. Even the slight hiccup here in issue three still resulted in a generally strong comic.

Invaders #3: …And Then You Shoot Your Brother