Invaders #7: The Morning After 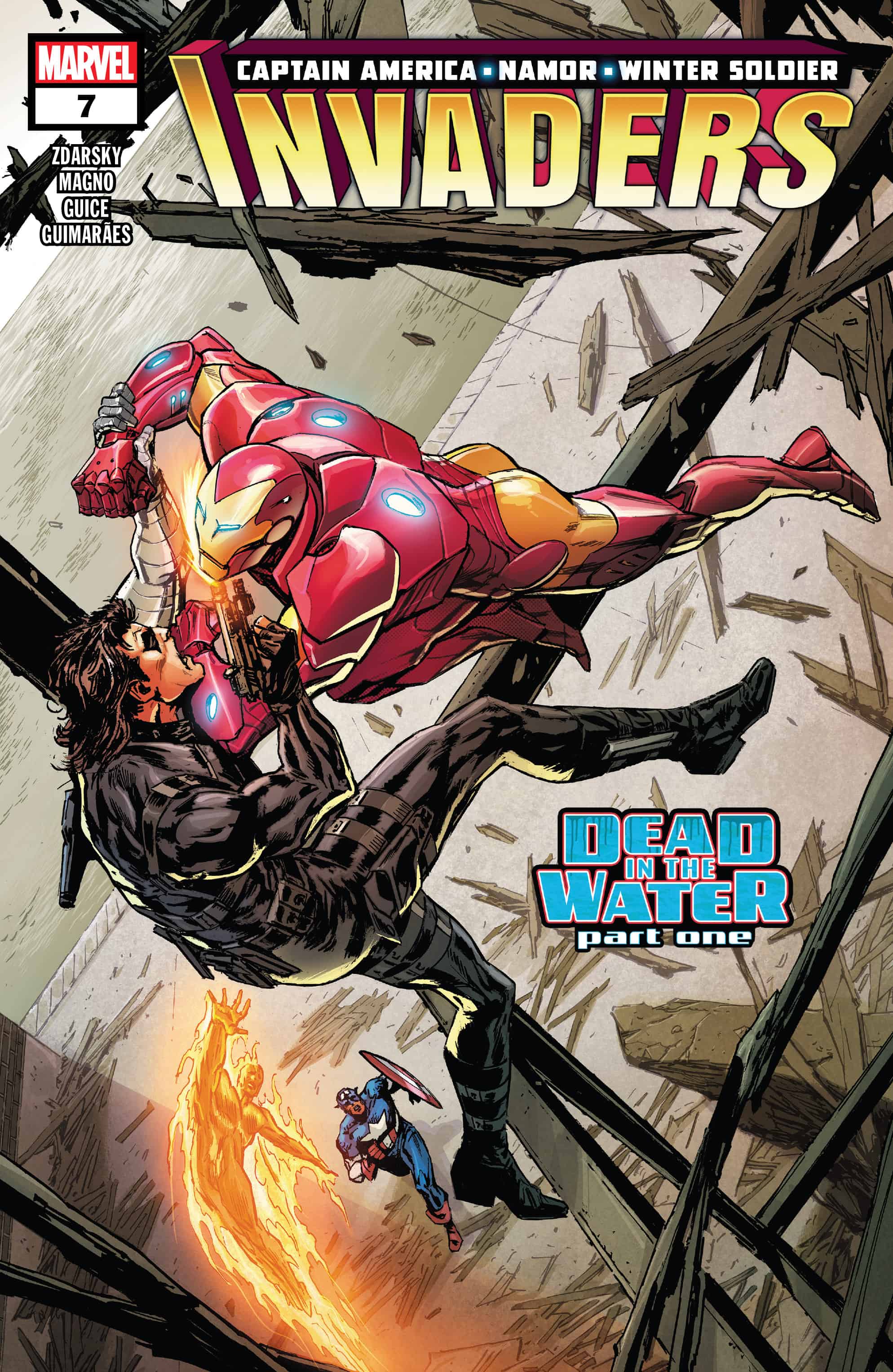 In the wake of Namor's assault on the surface world - with a device that strangely transformed every human within its blast radius into a water-breathing Atlantean - the defeated Invaders pick up the pieces and try their best to adapt to the brave new world. Captain America, especially, seems shaken by how far his former friend has fallen. But that's okay, because his ol' buddy Iron Man is on hand to make things worse by staging a re-enactment of "Civil War" with Cap. Winter Soldier tries to intervene, but is quickly tossed aside. Even though he's at his jerkiest about it, Iron Man does have a point, and Cap knows it: Namor could have been stopped if only Cap hadn't been such an irrepressible optimist about his friend's supposed better nature.

Elsewhere in the world, though, things threaten to intensify on the world stage as Russia agitates for war with Atlantis - threatening to take the conflict global!

But within the depths of Atlantis itself, Namor finds himself at a crossroads, as "Machan" reminds him of ordering last issue's assault - despite Namor having no memory of it, as Xavier's past mental tampering begins to crack wider and wider. That may be a moot point, though, as "Machan" presents Namor with a weapon that threatens to empower him to an even higher, more-unstoppable level!

Invaders takes time to exhale and let the dust settle in its seventh issue after last issue’s cataclysmic ending, which, although ending in a somewhat anti-climactic way that made Namor bad but not TOO bad by turning a bunch of humans into Atlanteans instead of outright decimating them – creates a welcome change of pace to the last few issues’ ever-increasing intensity. And although this is a quieter issue, it is a welcome one, allowing each character time for reflection on where they’ve come so far in the journey this title presents. (Well, everyone except poor Bucky, who just gets knocked around by full-on dick-mode Iron Man and does nothing else. Which, sidebar: is it time for a new Winter Soldier ongoing yet…?)

Writer Chip Zdarsky begins to show the global ramifications of Namor’s assault, as the United Nations debates response and the Russian representative agitates for war – a plot point that needs to be further addressed. And poor Jim Hammond gets his head back on right – literally – as Tony makes up for his dickishness by building him a cool new body, just in time for another x-factor in the form of Human Torch’s old sidekick Toro shows up and begins demanding Hammond be released to him and only him. As the only O.G. Invader not yet represented, it will be interesting to see what he brings to the table.

But then there’s Namor, and the inevitable crumbling of the mental mucking around Charles Xavier did with his mind. Will he come to his senses before he does something far worse than he already has? Or, given the new toy “Machan” gives him to play with at issue’s end – a classic Bronze Age Marvel MacGuffin amplifying his powers far, far beyond their original scope – will it even matter?

My biggest complaint about this issue is the swiftness with which Zdarsky resorted to the now-familiar Cap versus Iron Man trope. Yes, we get it, “Civil War” was a story that happened. But the fact that these two characters so often resort to fisticuffs over the slightest provocation is a plot point that’s been beat to death. It doesn’t kill the issue – and Tony has legitimate reason to be angry – but ENOUGH with heroes fighting heroes already. Especially these two.

It wouldn’t be an Invaders review if I didn’t tip my hat to the stellar art team of Carlos Magno and Butch Guice. Their contrasting styles work great on this book, Magno providing a crisp, detailed look for the present and Guice allowing for a gritty newsreel look for flashbacks. These two are a powerhouse duo that bring a unique, signature look to this book.

Although quieter than previous installments, Invaders #7 does a great job of moving the pieces around the chessboard to set the stage for the next arc. Anyone wondering about the hype of Chip Zdarsky's Eisner win would do well to check this book out. Month in and month out, he proves his writing chops, and that he deserved that win.

Invaders #7: The Morning After