Invaders #9: The War Inside My Head 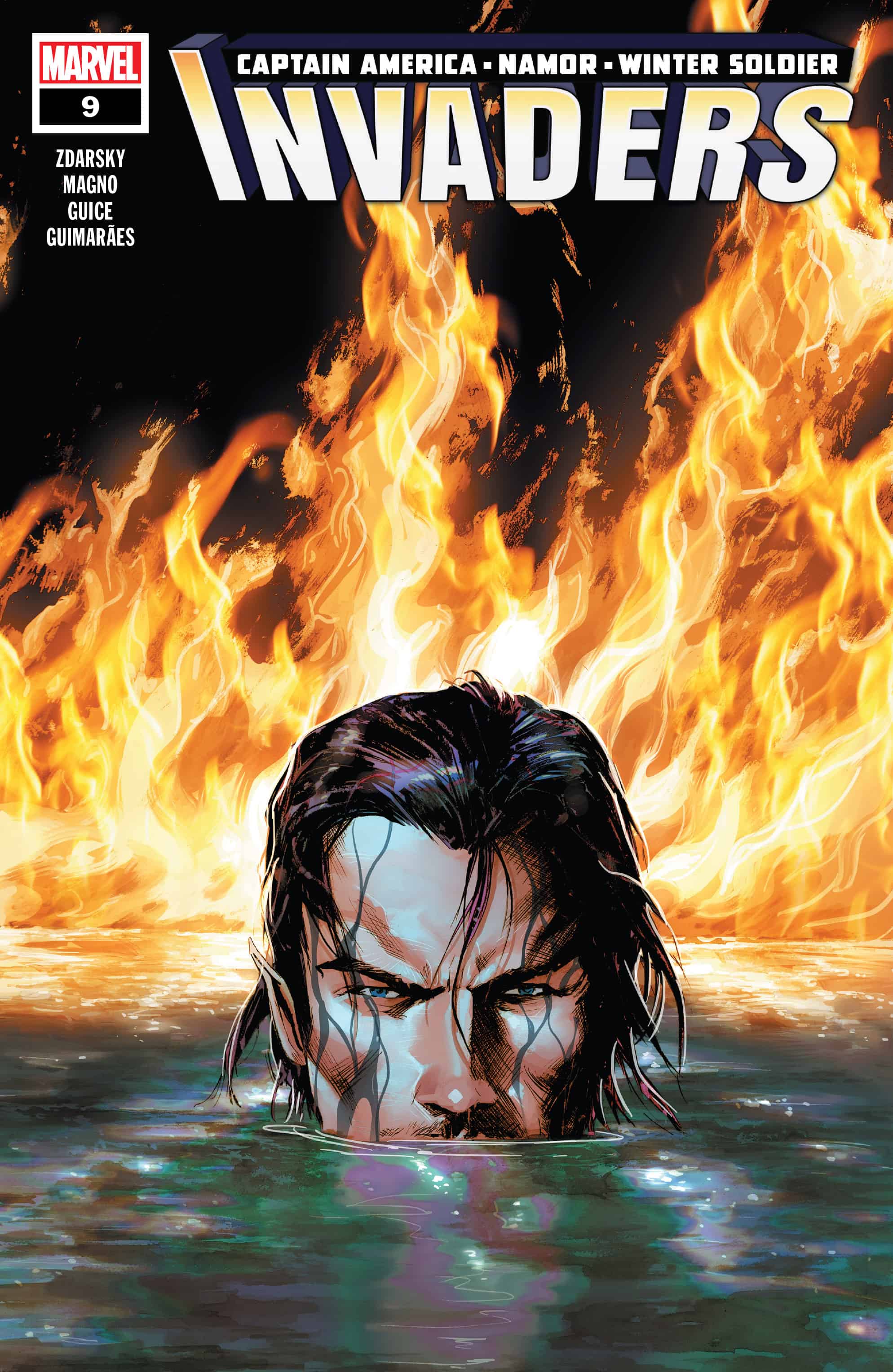 Namor's war with the surface continues, but the war inside his own mind - thanks to Xavier's machinations and made worse by his abuse of the Serpent crown - continues! Namor has decided to directly confront the Roxxon Corporation for their role in the U.S.'s recent assault on Atlantis. 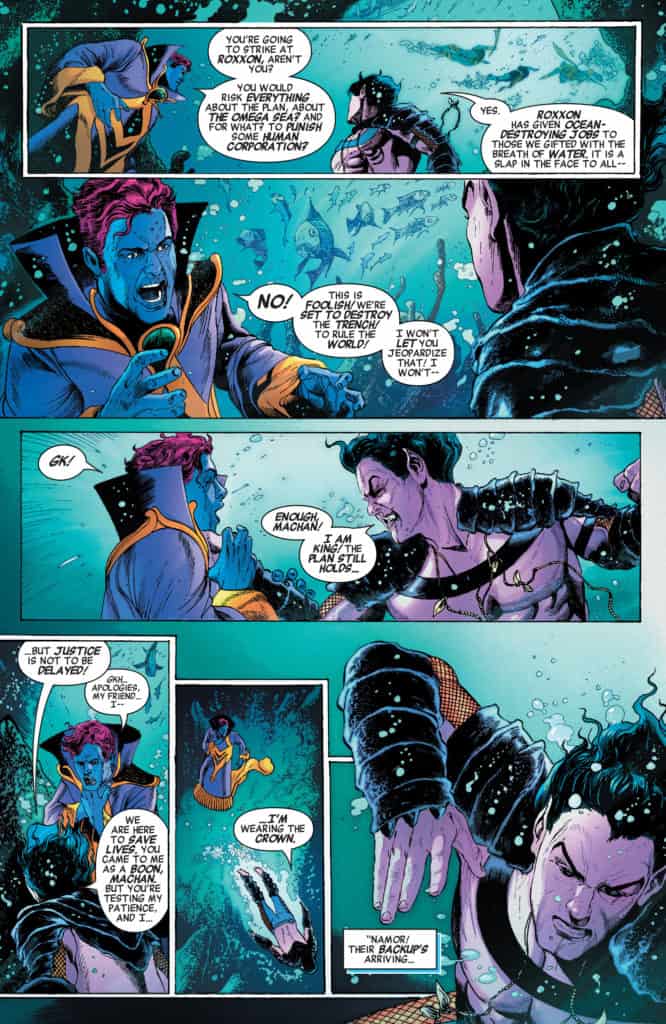 But war with the surface isn't the only thing consuming Namor. He's becoming more and more untethered from reality, and is arguing with "Machan" every bit as much as he's interacting with reality.

The assault on Roxxon begins, but is soon interrupted by Captain America and his Invader allies - Jim Hammond, Spitfire, and even Toro! 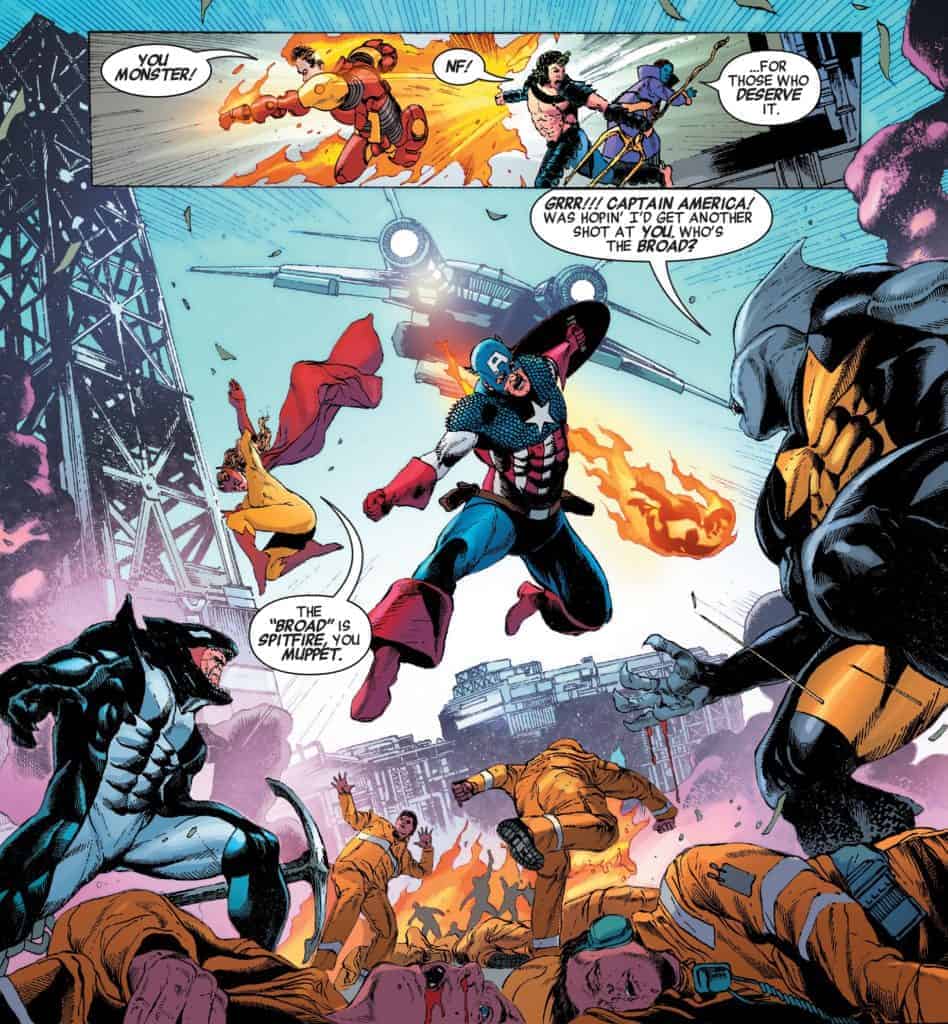 After a brief skirmish, Namor and is forces retreat... 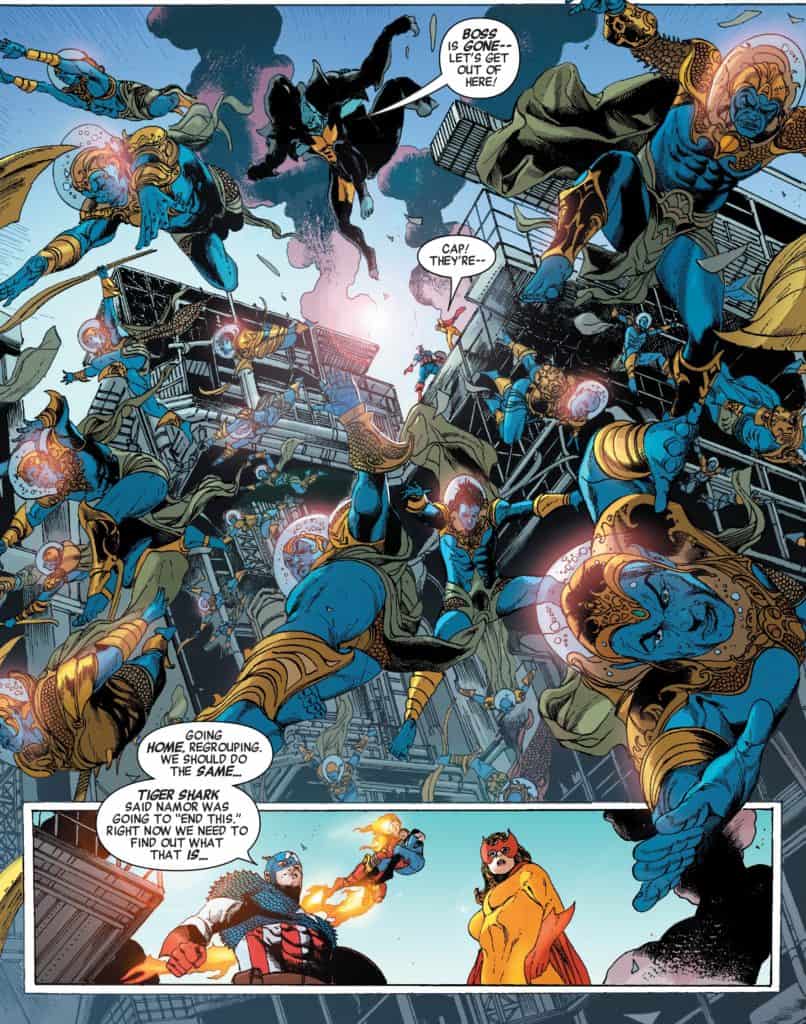 But below the surface, the Namor/Machen conflict reaches a sudden - and unforeseen - crescendo! 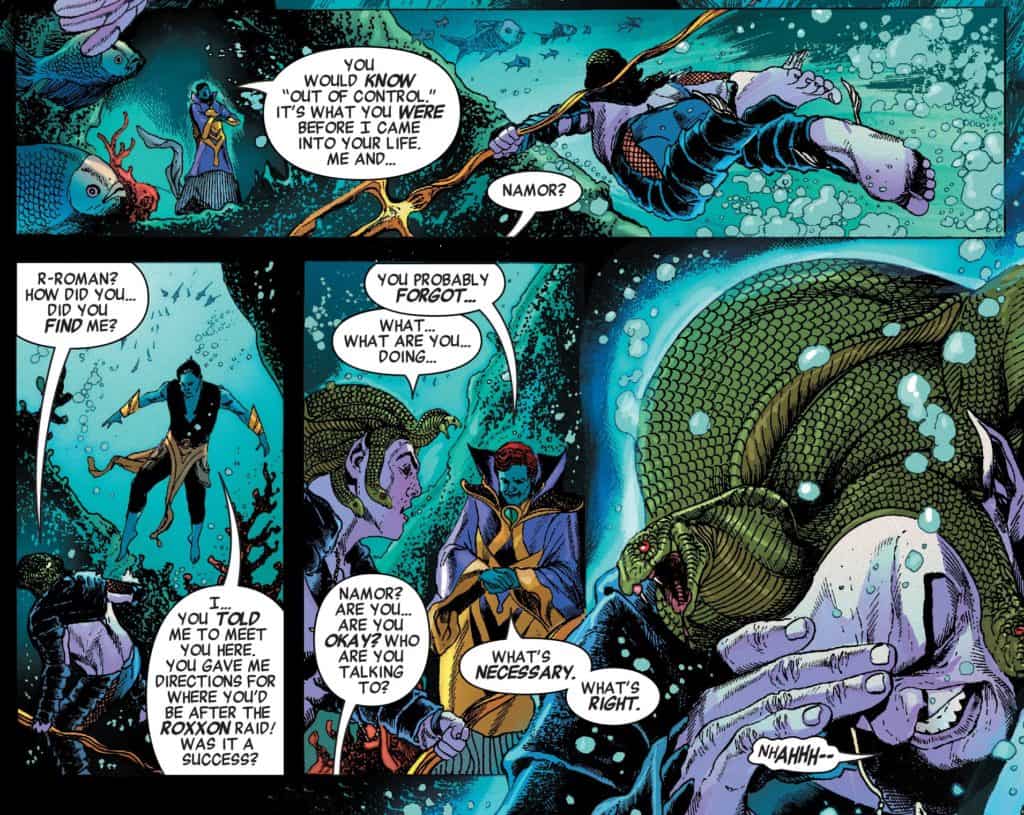 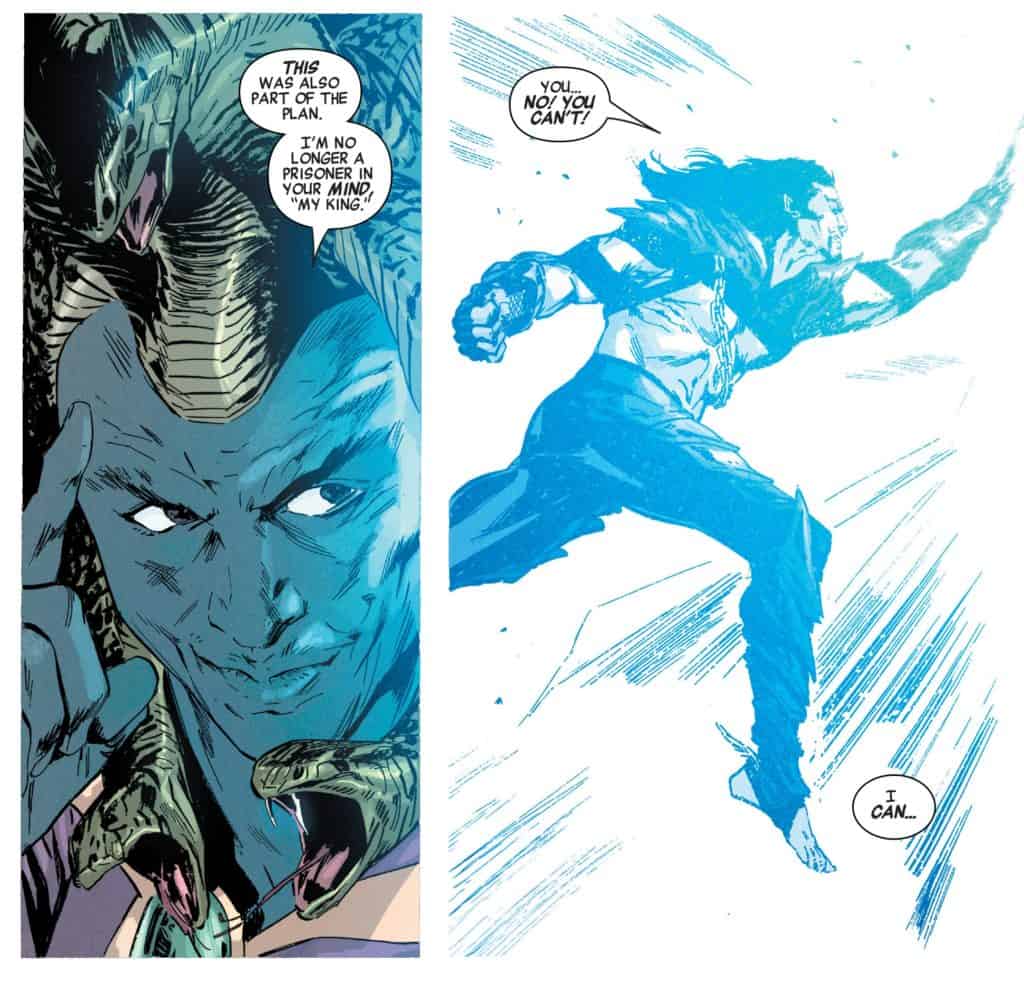 Could it be? Has Machen escaped Namor's mind and become real? And what does this bode for this series going forward?

Although on one level Invaders #9 is a lot of action and not much else, there’s a lot going on beneath the surface. In fact, it could be said that the action beats merely exist to counterbalance the real plot, which is the climax of the ongoing conflict between Namor and Machen. Machen, if you don’t recall, is the product of Charles Xavier’s psychic tampering years ago, a guilty memory from World War II given (psychic) flesh and utilized to calm Namor’s raging mind. Recently, Machen has been becoming gradually more powerful, and has been exerting influence over Namor’s actions – to such a degree that he’s been losing time, and doesn’t recall his own actions. This internal tension has been exacerbated by Namor’s recent use of the Serpent Crown, an all-powerful gewgaw that essentially allow its wearer to be like unto a god. It’s a great old-school MacGuffin from Steve Englehart’s classic ’70s Avengers. (Seriously, if you’ve never read any Englehart Avengers, drop everything and find some trades or floppies. You won’t be sorry.)

One of the hallmarks of writer Chip Zdarsky’s Invaders has been his great utilization of Marvel’s yesteryear. There’s a token inevitability to that, since the Invaders themselves are from World War II. But in addition to the Serpent Crown, Zdarsky has also brought Charles Xavier, Toro, and now Spitfire into the mix as well, creating a tangible sense of history to the story. In a lot of ways, Invaders IS Marvel writ large into one tidy package: the World War II ties, the Atomic Age mutancy of Xavier, the perilous ties to today. This is all very Marvel-specific, and in Zdarsky’s hands, it works flawlessly. Bolstered by continuously top-notch art by Carlos Magno and Butch Guise, this book is everything a Marvel fan could ask for.

Invaders continues to be one of Marvel's best books, and issue nine is no exception. As the story takes a crucial turn, readers will no doubt be on the edge of their seat to see what happens next!

Invaders #9: The War Inside My Head