Iron Fist: Heart of the Dragon #5: Fists of Fury

Iron Fist: Heart of the Dragon #5 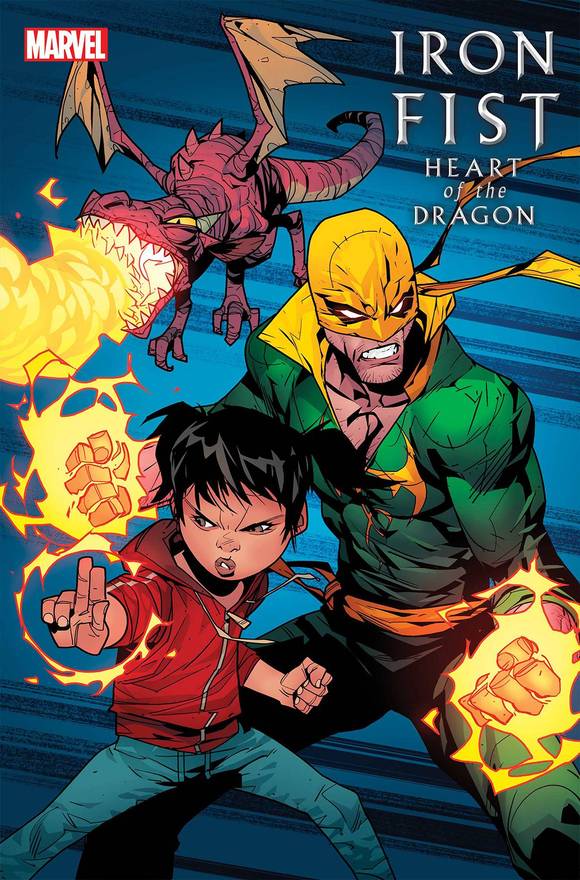 Dragons are getting bumped off, the heroes are forced to fight off wave after wave of undead ninjas as they traverse the globe and different dimensions and amidst it all a new Immortal Weapon has been forged. Will all the madness cease with Iron Fist and his allies triumphing over the Ghost Dragon of the Hidden City and the dark forces surrounding them? Only time (and lots of ki powered punches) will tell......

We pick up with Okoye stumbling upon the last dragon standing and receiving some much needed deeper insight into the campaign against the dragons and their immortal cities, to drop some major spoilers and get right to the point Okoye has become a “new Iron Fist” empowered with the same dragon chi that gives Danny Rand his trademark Iron Fist. The implications of this and the fact she actually wields the power of two dragons chi to Danny’s one are yet to be seen but absolutely buckwild to ponder. This is easily the most interesting development in the story so far aside from the revelation of the Hidden City and its fierce Ghost Dragon. I start off with that as a strong positive so it’s still fresh in your mind when we swing back to it because despite being an enjoyable read so far and having some fantastic art….there are some slight problems here as loathe as I am to admit as a certified Larry Hama Stan.

Mostly the villains are largely forgettable despite ya know being the main conflict of the story. I like the idea of replacing the typical “here comes Steel Serpent (or Steel Phoenix depending on the story) again tripping with a bad version of the Iron Fist” with Brenda Swanson aka Yama Dragonsbane. I even like the fact her origin is a bit of a deep cut rewarding knowledge of the Danny Rand mythos but also not so obscure you’re lost if you haven’t read a ton of Iron Fist in the past. That part is rock solid writing and even her short bits of dialogue and back story are very tastefully done. However the main antagonist here a demonlike super monk, The Hierophant is just not all that interesting to be blunt. Even at the beginning of this issue as he let’s loose a classic villain stroking his own ego rant you’re pretty much gonna forget about anything he actually said like two pages later. If anything him being more in the background guiding Yama Dragonsbane on her quest for revenge against Danny and the crew was much more involving because dude wasn’t just standing around being snarky and reaping the benefits of a well suited goon actually getting stuff done. To put it into some context imagine watching the 1st Avengers movie and Thanos was following around Loki or the Chitauri and all he did was gloat…..what would that actually add to the story rather than being the man behind the scenes as we saw him?

That’s not to say that makes this a bad story or anything but I do think it does a major disservice to Brenda who is actually entertaining to watch and just enough seeds are planted to make you want to see more of why she isn’t just a generic bad guy with a chip on her shoulder. It’s almost the exact opposite of what we got with Okoye here who also doesn’t have huge chunks of dialogue but the parts where she’s not kicking butt are poignant and move the story along.

The great fight scenes, the little quirky moments like Pei and Gork teaming up to thrash some zombie ninjas also add some serious read value here and the art of Wachter is absolutely on point. It has the perfect mix of grunge with high energy action and fluidity.  In fact the fights are probably one of the best done elements of the entire story despite getting them in short segments. Luke and Danny reminding us why we love the Heroes for Hire team so much, Okoye bringing that Dora Milaje heat to the scraps? My hat is off to all of it but the Hierophant being a bit bland does kinda interrupt the flow of what is otherwise a really solid martial arts adventure tale. All that being said I’m still very excited for the conclusion and I can’t wait to see Okoye really unleash her new found power

Iron Fist: Heart of the Dragon #5 ramps up to what should be a wild ride of a finish but if you haven't hopped on the train yet either start from the beginning or hold out for the trade to see what the hype is about.

Iron Fist: Heart of the Dragon #5: Fists of Fury