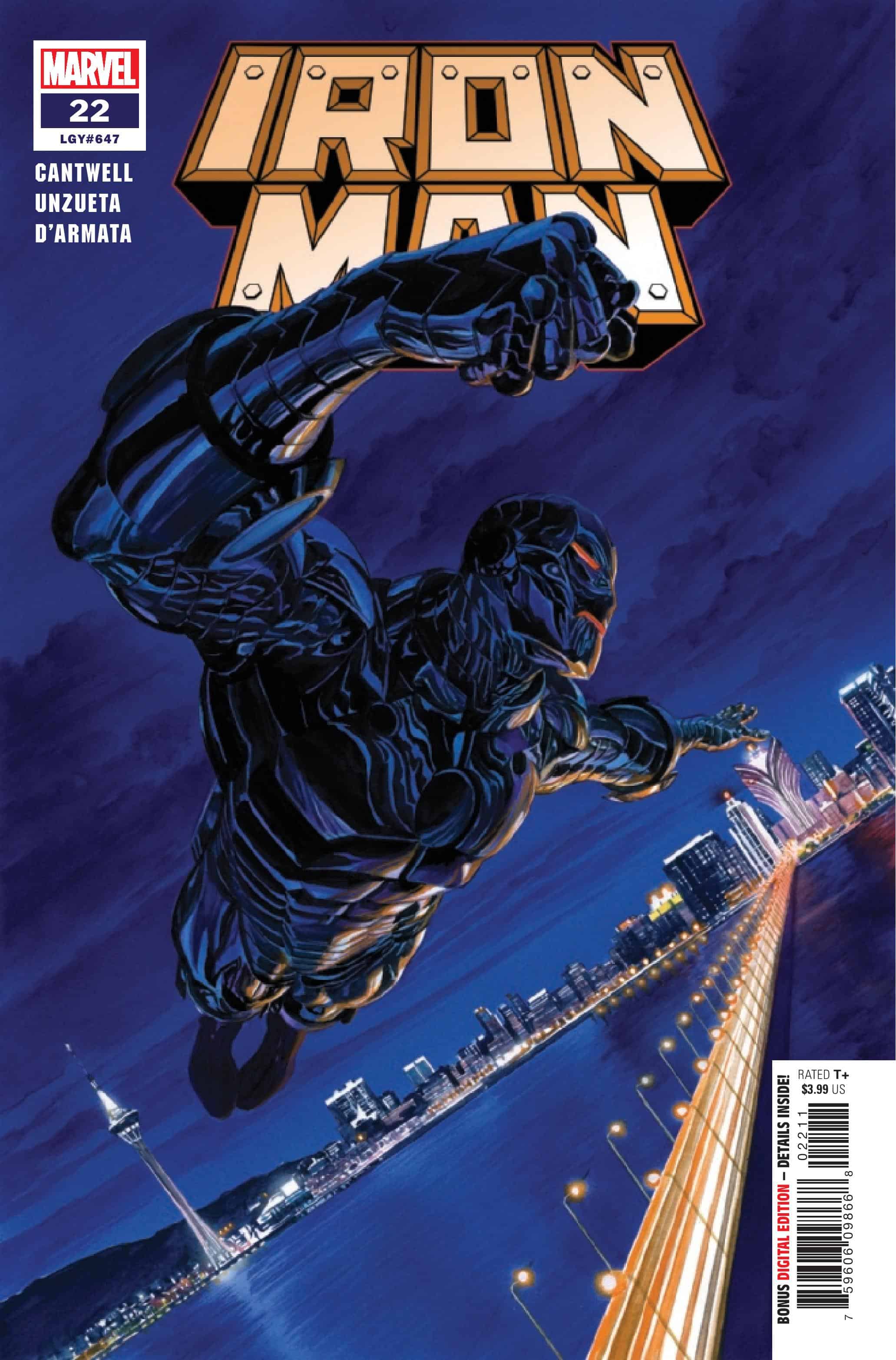 Tony Stark has worked hard to pull himself up by his iron bootstraps, and after a few detours, he finally tracks down his old friend and employee Vic Martinelli…only to find he’s arrived too late and Vic’s been murdered. Before a guilt-ridden Tony can get a bead on why, he’s attacked by Vic’s assailant…THE TITANIUM MAN. In the battle, he learns the sinister plot goes deeper. The Titanium Man is working for those even more mysterious, and Vic was killed because he’d gotten possession of THE MANDARIN’S RINGS. Tony flies overseas to Asia and headlong into a cloak of conspiracy, hell-bent on tracking down the rings of his most fearsome adversary, desperate to stop them from falling into the wrong hands. But at what cost? What is Tony Stark willing to sacrifice in order to stop the Mandarin’s power returning, wielded by the hands of a new – and possibly unsuspecting – acolyte? Iron Man is about to go hard. He’s about to buddy up with criminals. And he’s about to go…stealth.

We’re in the home stretch of Christopher Cantwell’s Iron Man run, and it’s finally starting to heat up for me. It’s been a long, occasionally bumpy twenty-two issues, but we’re getting to the good stuff. Now, I’ll be completely honest, I had high hopes for Cantwell and his Iron Man, unfortunately it’s been hit or miss. He has had some absolute triumphs in this run, especially with the emergence of Hellcat as the emotional anchor for Tony, and the resurrection of the Unicorn (one of my absolute favorite of Iron Man’s classic villains), plus the art. The art is something that needs to be addressed during this run, and I plan on kvelling (that’s Yiddish for gushing) over it.

When word got out that the big villain for his first arc would be Michael Korvac, I was beyond ecstatic. The Korvac Saga by Jim Shooter, David Michelinie, the late, great, George Peréz, and Dave Wenzel, but unfortunately no other story that involved Korvac has been able to capture the same magic that the original story did. At least not in the Marvel universe. Shooter was able to capture that magic in his Solar Man of the Atom series for Valiant comics in the 90’s. It just seems to me that Shooter can’t be the only one who can write a really compelling Korvac, and Cantwell hit on some really poignant character beats in the beginning, so there was hope.

The story of Korvac is a man from a future where the earth, and the rest of the planets in the solar system were enslaved and conquered by the Badoon empire. Korvac, a rather minor villain created by Shooter, and prolific 70’s writer, Steve Gerber, for the Defenders, but who would come mostly associated with the original Guardians of the Galaxy. After being transformed into a cyborg by the Badoon, he would gain near omnipotent cosmic power by finding, and tapping into Galactus’s worldship, Taa II, and flee from the Badoon controlled galaxy to the Marvel universe in 1978-ish. For those in the know, the original Guardians were a team of freedom fighters from an alternate earths future, who were valiantly fighting against the Badoon. They’d have some adventures in the regular 616 current timeline, with the Defenders, but it’d be the adventure with the Avengers that would make them fan favorites, that’d even get a series in the 90’s. The team, and book, would become one of my favorites during this era.

After losing interest in this run due to the rather…underwhelming, and overly long arc, Cantwell and Unzueta’s arc has touched on story tropes that just work for me. Now, I’m not adverse to elevating the types of stories that comics tell regarding the superhero line, because retelling the same stories with mynute differences tends to lend to stagnation, but Cantwell’s Tony just didn’t seem authentic. Yes, he’s a control freak. Yes, he’s an addict, which we got in his first arc, but it was just so dramatically dull. There are many things that are excusable, unfortunately being dull is one of the worst things to deal with, especially with a character like Korvac. With this newest arc, we’re dealing with things that just work better with the framework of an Iron Man story. We get international political intrigue, and international arms dealers, something to do with the Mandarin’s rings (could we be getting a new Mandarin? Or a return of the original?) plus a return of a Cold War era villain that just tickled me to see again. Plus!!!! a return of Tony’s stealth armor!!!! I’ll admit, it’s my favorite variation of Tony’s armor. I really hope Cantwell can land the ending on this story.

Now, onto the art of one Angel Unzueta. Unzueta had the unenviable position of following CAFU, who put his stamp on the character, and given us some of the most beautiful books to look at since the end of Slott’s run (the guy had Valerio Schiti on the book, and that’s some very big shoes to follow). Now Unzueta isn’t a newcomer when it comes to the ironed Avenger, as he did a few fill-in issues, plus was the artist on the Landry penned Captain America/Iron Man mini from a few months ago, so he’s well versed in Tony’s world. His work here is reminiscent of CAFU’s style, but a tad bit more…stiff. CAFU is an artist who has been around for the last few decades, and has evolved as an artist to the point, that if you looked at his style that he was using on his run of Action Comics with Joe Kelly, you wouldn’t believe they’re the same person. Almost in a photo-realistic way, which works on a lot of characters, but it was the human moments I found most lacking here. The images of all the tech, plus the fight with Tony, Rhodey, and that silver age golden oldie really highlighted Unzueta’s strengths in this issue. I can’t wait to see what else he has in store for us.

After a rocky,  and long opening arc, Cantwell and Unzueta seem to be getting their bearings on Tony, and what makes him tick. It’s a shame to see it coming to a close over the course of the next three issues, but it looks like he’s going out with a bang.