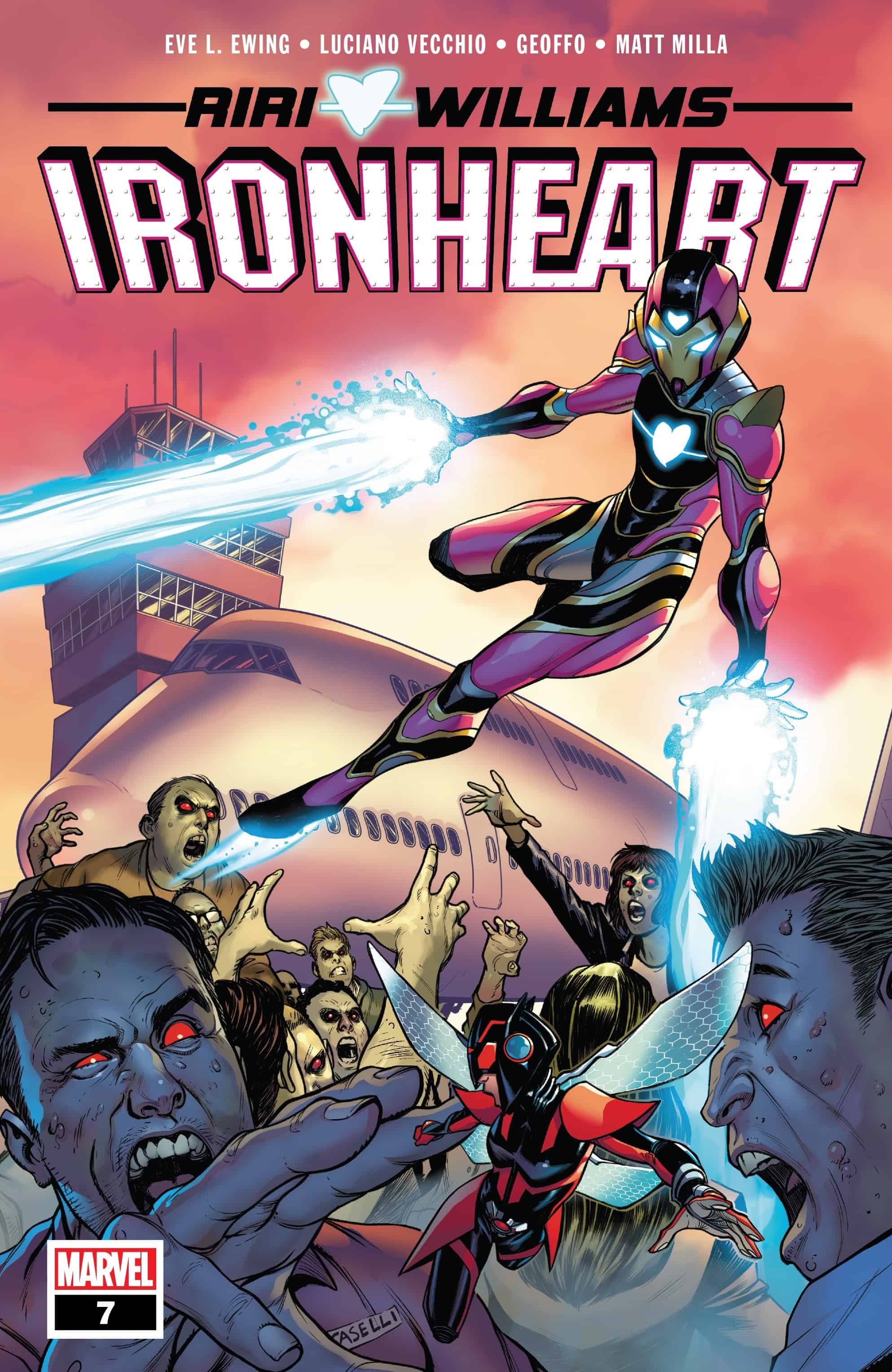 The IQ on this team-up is off the charts! Nadia Van Dyne, A.K.A. the Unstoppable Wasp, swings by Chicago to visit Ironheart…but neither of them was expecting a zombie invasion! Can these two girl geniuses put their heads together and figure out what’s turning ordinary Chicagoans into the walking dead?

The adventures of Ironheart take a dark turn with issue #7 that finds her confronting a literal zombie uprising. Luckily, she won’t have to deal with them alone though as her best friends Xavier and Nadia Van Dyne aka the Wasp join the fight! 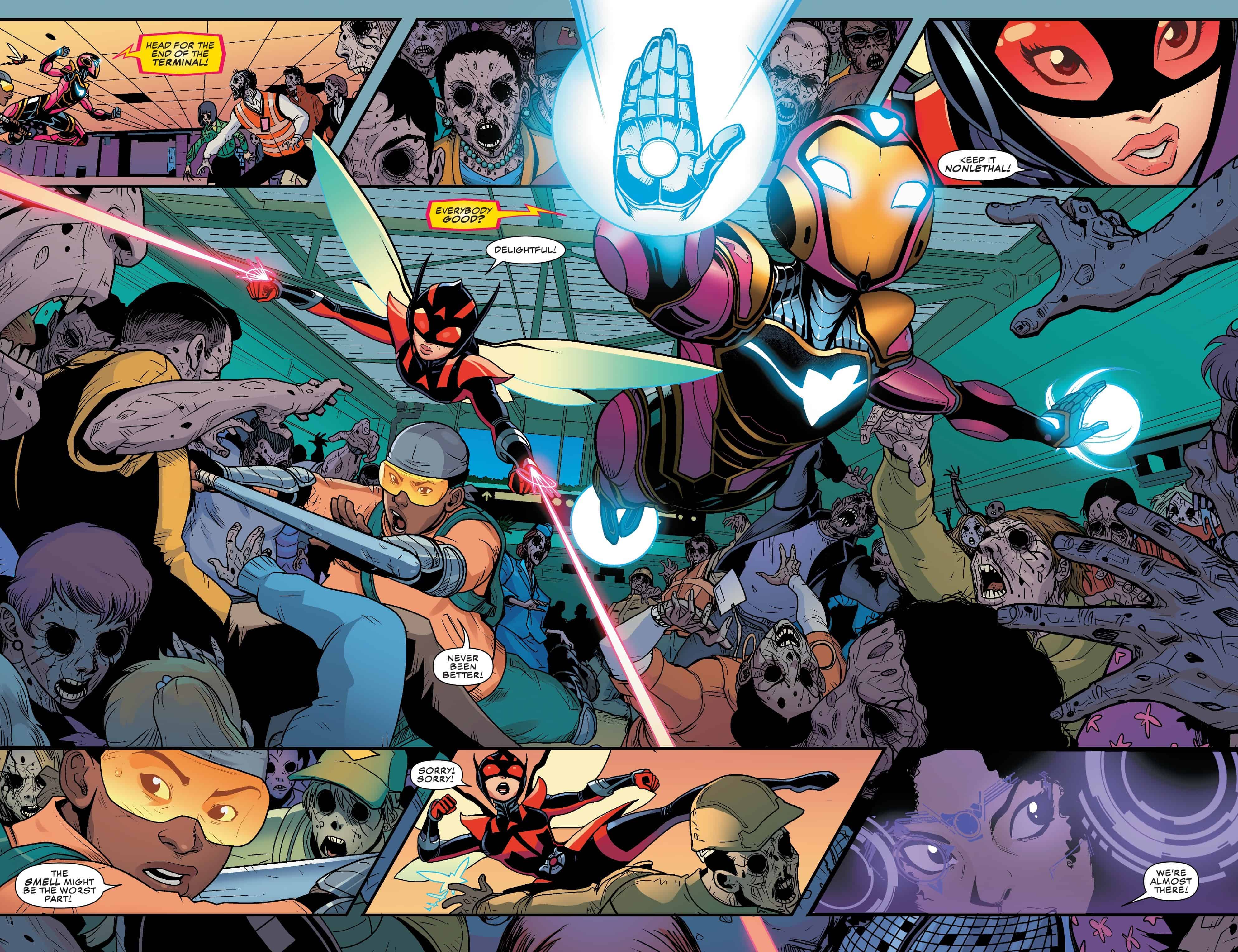 This is a fairly straightforward issue in all honesty. The zombie attack kicks off a humor-filled story that allows the creative team to focus on the friendships involved between both Riri and Nadia as well as Xavier. The zombies never really feel like a true threat considering both Ironheart and the Wasp are handling the situation, but the artwork does commit to the horror aspect of the story rather well. The zombies’ black hollow eyes fill the pages with dread even with the heroes’ attempts to lighten the mood. Although the dialogue can become clunky at times, it’s a well-rounded issue that hits enough of the right notes to really satisfy.

For those who have been following up to this point, the reveal of Eclipse as the villain will come with an extra surprise as she had the Ten Rings terrorist group insignia on her back. Although we don’t know what is really going on with this group, it has been building for more than few issues now and will almost certainly become more prominent as we continue. Whatever magical plans they have going on, it has seemingly gotten Ironheart’s full attention. This means we could soon be getting answers to some of the big picture events happening right now.

Writer Eve L. Ewing brings an irresistible charm to the characters she writes, and Riri is an excellent example of this. As we go from one team-up with Miles last issue to a new one featuring Nadia this issue, it’s interesting to see friendship become such an important part of Riri’s life. It turns out, she is actually quite personable when she is in her element! We first see her as the somewhat typical brilliant student who has become jaded with her surroundings, but as we get deeper into her superhero antics as Ironheart, we see her open up in a great way. This emotional development is one of the strongest aspects of the series so far. We are following Riri on her journey to becoming the hero everyone (including her) knows she can be. It can become easy to get distracted by the time-loop villains and zombie uprisings that have Ironheart so busy, but these stories are built on the foundation of establishing ties to the larger Marvel universe. From Miles to Nadia, we are seeing Riri grow into the hero she is meant to be by building relationships and gaining a better understanding of just how much it takes to be in this line of business.

For for fans of Ironheart, this should be an enjoyable issue. Though it isn’t particularly complex, it is fun and knows exactly what it is trying to accomplish.

'Ironheart #7' is a lighthearted and action-packed story with just the right amount of zombies to show off Riri and Nadia's dynamic friendship. Though lacking in narrative depth, it is a fun issue that keeps the focus on heart and I appreciate that.