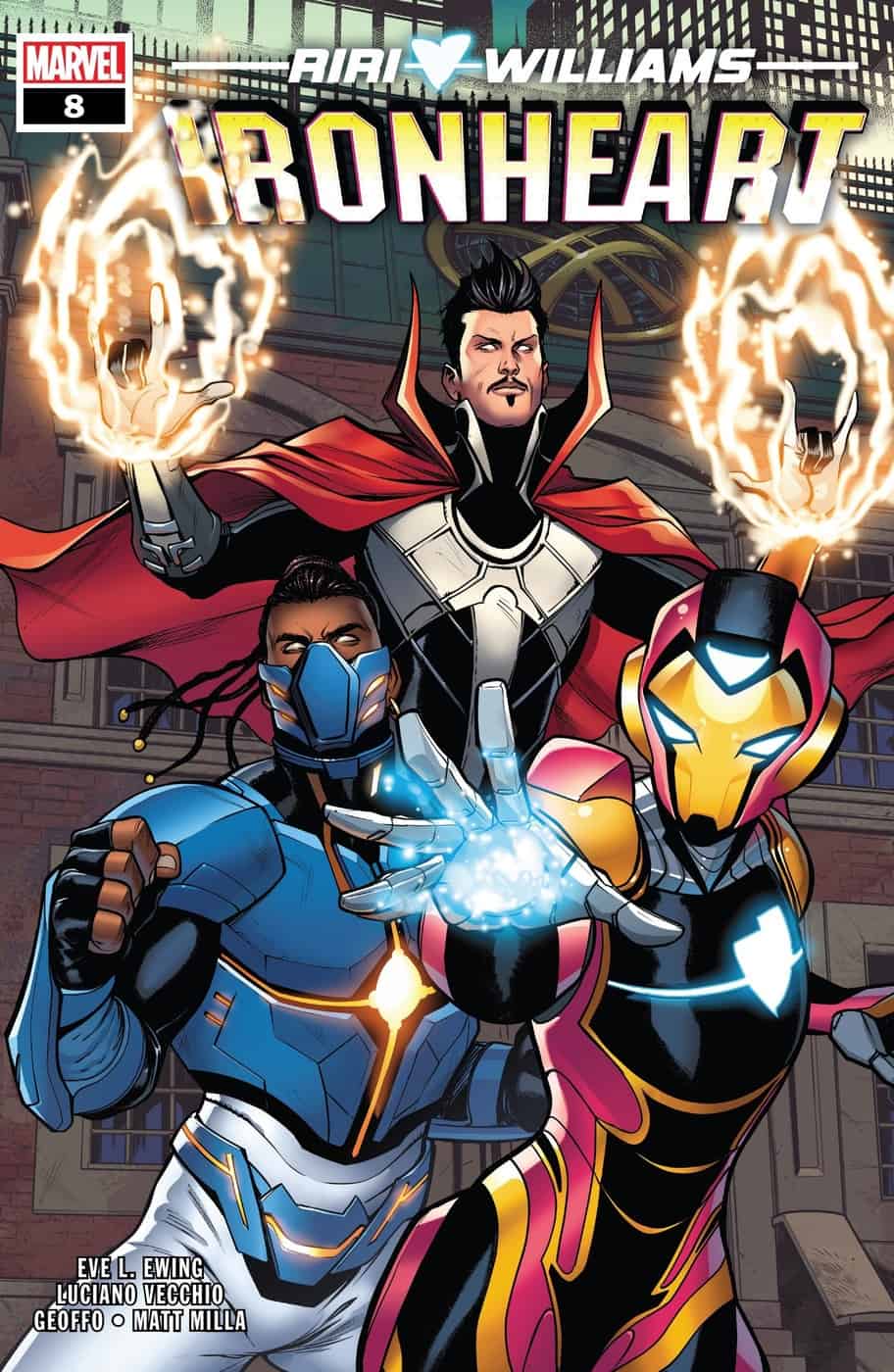 As Ironheart creeps closer to understanding the powerful people who have been wreaking magical havoc around her, she needs to talk to someone who can give her a clue...and it’s none other than the Sorcerer Supreme himself, DOCTOR STRANGE!

The team-ups continue in Ironheart #8 as Nadia Van Dyke takes her leave after stopping a zombie invasion and the Sorcerer Supreme makes his grand entrance! Riri is in need of answers regarding recent magical events, but she may get more than she bargained for inside the Sanctum Sanctorum… 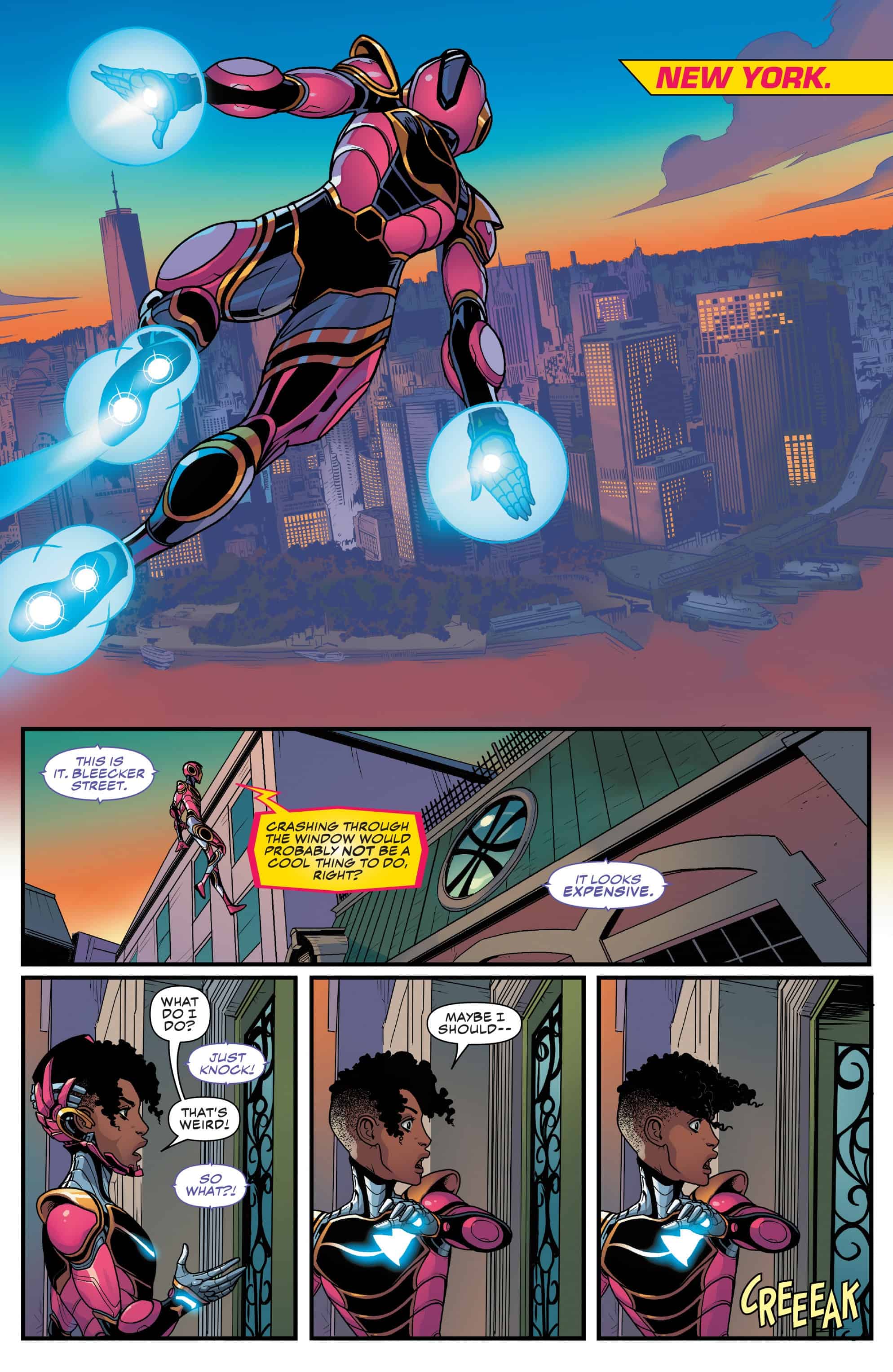 First, writer Eve L. Ewing has done a magnificent job of bringing Ironheart into the Marvel universe. In a move not unlike what we are seeing with Ms. Marvel in the new Marvel Team-Up series, we see Riri being exposed to a wide variety of heroes. This allows a unique opportunity for the character to become rooted in the universe with real relationships and dilemmas. It’s a really smart move that will hold up well over time and provide excellent opportunities for the character in the future.

The introduction of Doctor Strange is a welcome change of pace because of his potential to introduce a much more whimsical element against Riri’s penchant for tech and general sci-fi. The creative team takes full advantage of this new element with some truly fantastic visuals. Luciano Vecchio, Geoffo and Matt Milla are putting out some of the most underappreciated artwork at Marvel right now. From Riri’s history with Midnight’s Fire to her fight alongside Doctor Strange, we are given one beautiful panel after another.

Unfortunately, the script just isn’t as strong as the visuals. The introduction of Doctor Strange turns out to be more of a transitional story to get Riri to Wakanda. While this is super exciting as a fan, I couldn’t help but want more time with Doctor Strange outside of him simply giving advice. The issue ultimately feels like both a send off for Nadia and an introduction for Strange, but it ends with the promise of Wakanda, resulting in a narrative that comes across as disconnected.

This isn’t to say the issue is without it’s narrative strengths though. The abundant charm of Riri and the interesting interactions she has with such a wide cast of characters is a direct result of this creative team’s understanding of the character and willingness to take her to emotionally complex places. Her internal struggles as well as the friendships she is building are relatable and fundamentally human. This grounds the story with realistic drama and heart, allowing it to flourish into something truly enjoyable and different in an increasingly crowded superhero universe.

Overall, ‘Ironheart #8’ is undoubtedly a good book, but it does have its flaws. Luckily, they can be easily overlooked as the excitement and danger continues to build. The Ten Rings terrorist group may have dastardly plans in mind, but Riri teaming up with Shuri in Wakanda could prove to their breaking point!

'Ironheart #8' continues the recent team-up nature of the series with a beautiful introduction of Doctor Strange in the Sanctum Sanctorum. It's full of drama and heart, but it also feels more concerned with getting Riri to her next destination. Will the next issue make this worthwhile? We will have to just wait and see!