It's Only Teenage Wasteland #1 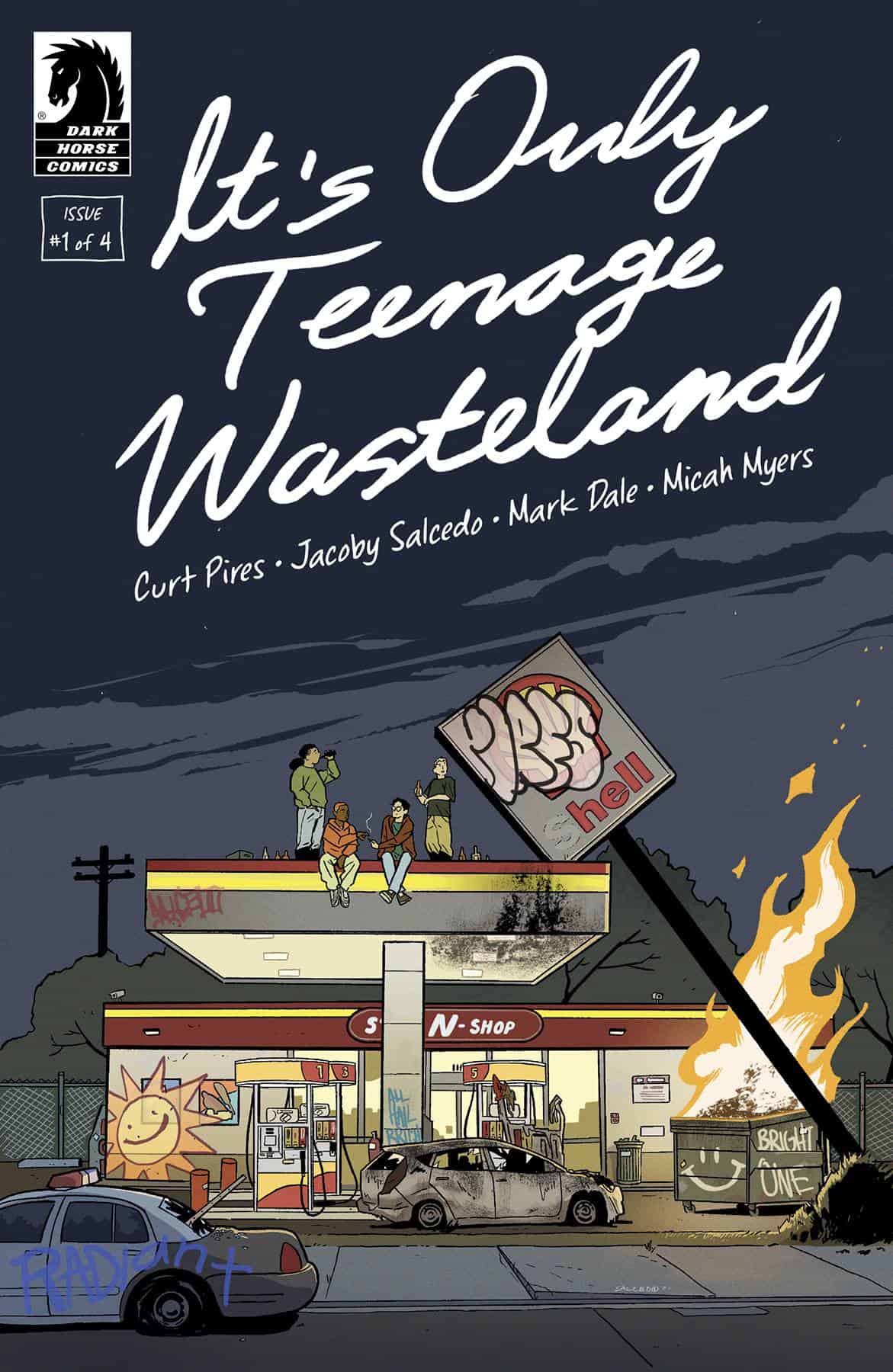 When his parents go out of town for the weekend, Mexican-American high schooler Javi decides to throw a party--one that'll launch him and his buds into popularity! Or at least get them noticed by some girls. But when things take a turn for the worse, Javi and his friends are thrust into a situation and future they could have never possibly prepared for. For fans of The Nice House on the Lake and What's the Furthest Place From Here? or other comics with really long titles and cool high concepts.

No one going to a high school party expects for the world to end. Flirting? Definitely. Kegstands? Maybe. A fight? Perhaps. But the end of the world? Probably not. But that’s just what happens in It’s Only Teenage Wasteland #1.

It’s Only Teenage Wasteland #1 opens in a ruined electronics store where two rejects from The Walking Dead are looking for a teenage boy. Narration establishes the teenager as the point of view character (“not the hero of the story” by his own admission) and then flashes back to the “beginning”. The teenager is named Javi, and he’s as average as you might imagine (as are his friends Scott, Gord, and SIone). They’re not social outcasts nor are they the popular kids. As Javi puts it, they’re just the ones that fall through the cracks. Javi’s parents are going out of town, so naturally he throws a party. And then the unspeakable happens.

Pires does a good job with this character establishing setup (which is really all this issue is). He introduces several supporting characters, none of which get nearly as much time as Javi but still receive enough attention to suggest they will recur in future issues. But even with limited time spent on these characters, Pires gives us fun moments that make them memorable.

There is also a good amount of humor here. Not laugh out loud humor, but situational humor balanced against the story. Pires is taking these characters seriously–even in their unserious moments. But that doesn’t mean we don’t get to laugh with them (and at them in a couple places).

Almost all of It’s Only Teenage Wasteland #1 is spent with Javi. The first time we see him in the flashback is memorable to say the least, and it’s a scene that will likely stick in readers’ minds for some time to come (no doubt very relatable to some readers). By the end of the issue we know why Javi doesn’t consider himself the hero of the story, and we wonder how he is going to survive in the present world that the series is set in. But this also makes him relatable. Post apocalyptic stories always center on the people who become the strongest and through force of will survive (and sometimes thrive) in the world they find themselves in. But most people would not be like that, and it would be interesting to follow a character who manages to survive in spite of not becoming that kind of person. There’s no way of knowing what Javi’s arc will be going forward, but at the moment that might be a possibility.

Javi is well served by Salcedo’s art who does a wonderful job running the gamut of expressions of happy to scared to angry to bored to shocked. There’s one panel in particular where Salcedo gives Javi a smirking and particularly sly look–his eyes would obviously be shifting side to side if he were in motion. I found Javi relatable throughout but that panel in particular–not because of what he was in the middle of when that moment happened but because Salcedo made him supremely human in that instant.

It’s Only Teenage Wasteland #1 is an engaging comic because Javi is easy to connect to. Virtually nothing about the post-apocalyptic world is communicated in the issue, so in that way it’s a comic built on potential. But there is a lot of potential here. And it’s fun, too.