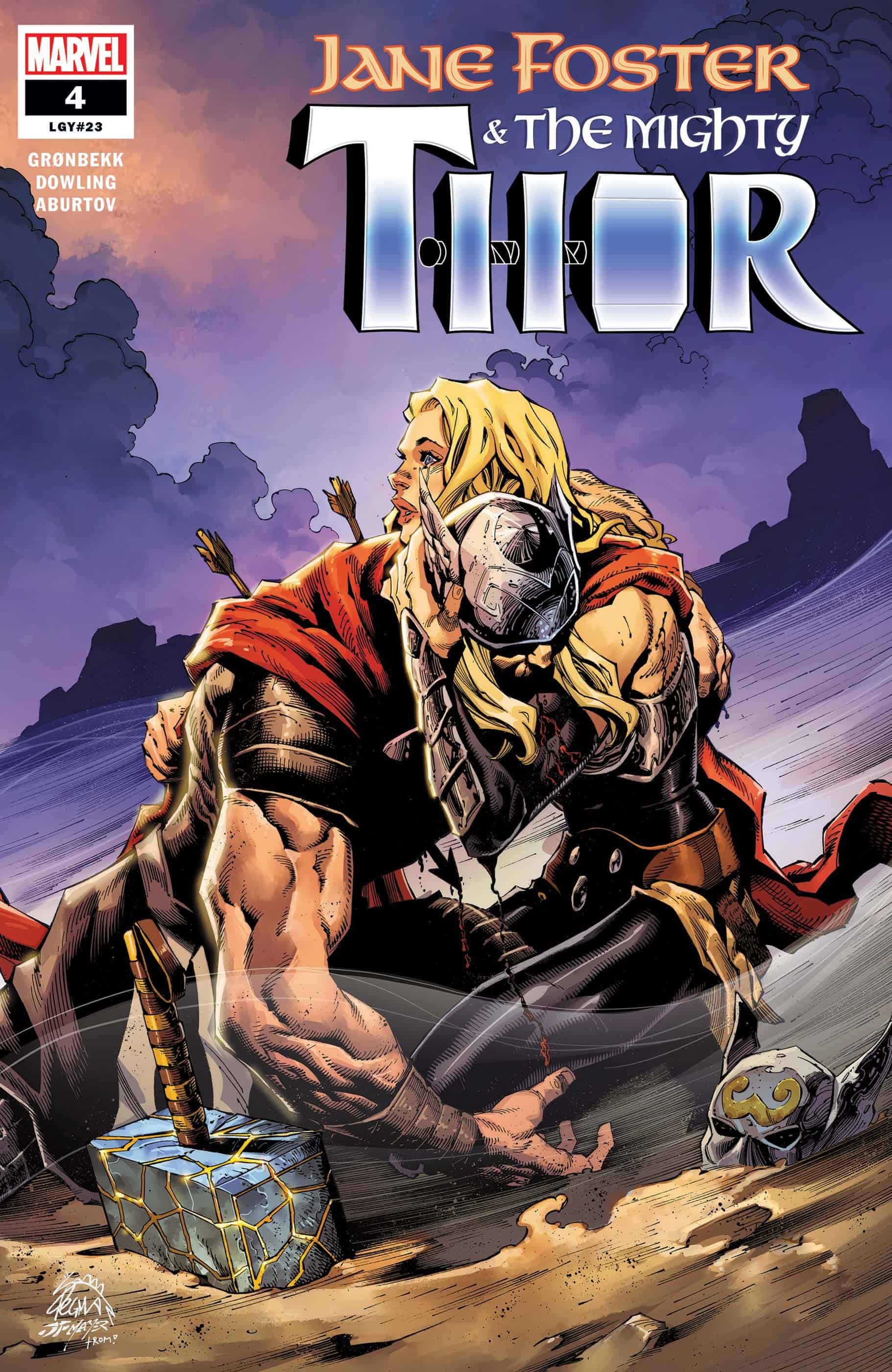 After the Enchantress frees Tyr Odinson and reminds him of his undisclosed promise to a mysterious masked woman, Runa defends Asgard from invading Dark Elves. But Asgard's enemies have come equipped with bombs that sallow anything in their radius. When Hildegarde and other Asgardians are struck by one intended for Runa, she's riddled with guilt. Meanwhile, Jane continues her search for the Splinter Realms. After fending off demons with Underjarn, the All-Weapon, she finally locates Thor--but just as the pair is reunited, Thor is impaled by two spears!

In this week’s momentous fourth issue, the enemy orchestrating Asgard’s downfall is finally revealed and it’s a revelation sure to have long-term readers desperate for the finale. However, Asgard’s downfall on its own isn’t much to write home about, seeing as it seems to happen every couple of arcs. Done poorly, Asgard feels hollow: its destruction may be dramatic, but is the destruction of a set rather than a city. Writer Torunn Grønbekk’s Asgard, however, feels more substantive–not just a grand set piece but a collection of individuals with their own motivations, fears, and flaws. Finding out how to balance superhuman deities with the things that make them–and make us–human is an art form that’s hard to master, but that Grønbekk does with aplomb. 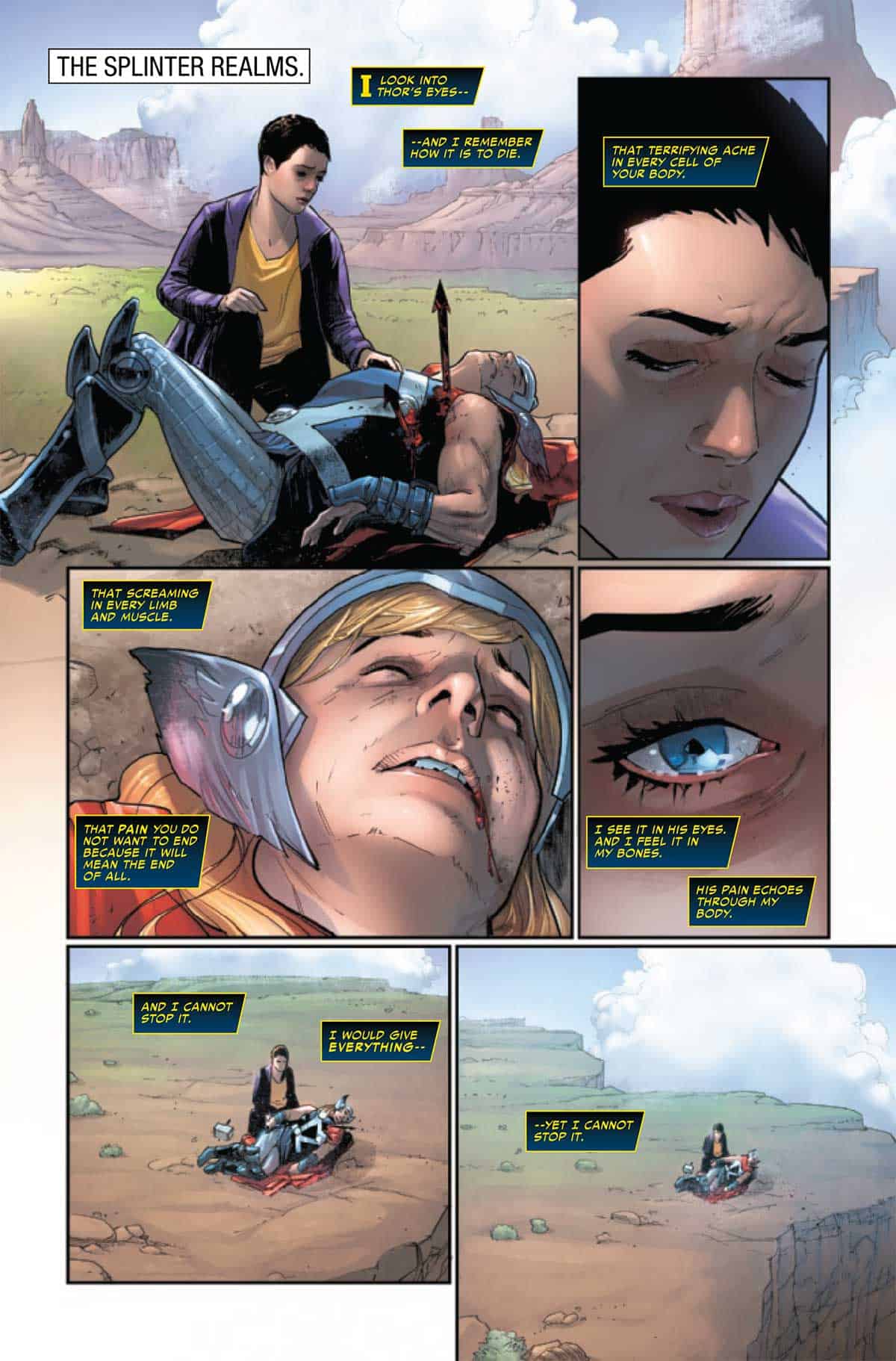 While the miniseries’ building momentum and unraveling mystery are reason enough to pick it up, what makes this issue so deeply memorable isn’t Asgard’s continued fall at all but the storyline contrasting it. Trapped in a splinter realm ruled by an antagonist only revealed towards the issue’s end, Jane Foster is once again forced to confront a struggle with cancer she has only recently left behind her. Juxtaposed with highly-saturated, epic battles of larger-than-life mythological figures, Jane’s struggle feels ten times more intimate and fragile. This smaller-than-life feeling is echoed by the desolate deserts and hospital scenery in Dowling’s artwork and colorist Jesus Aburtov’s shift to a desaturated color palette–as if the world is being drained of color and life alike. With respect and finesse, the comic broaches topics familiar to many people who have dealt with or continue to live with chronic illnesses, but ones rarely addressed in comics. It’s every bit as devastating as the comic’s cover promises and more than a match for the destruction Asgard’s enemies are wreaking upon it. 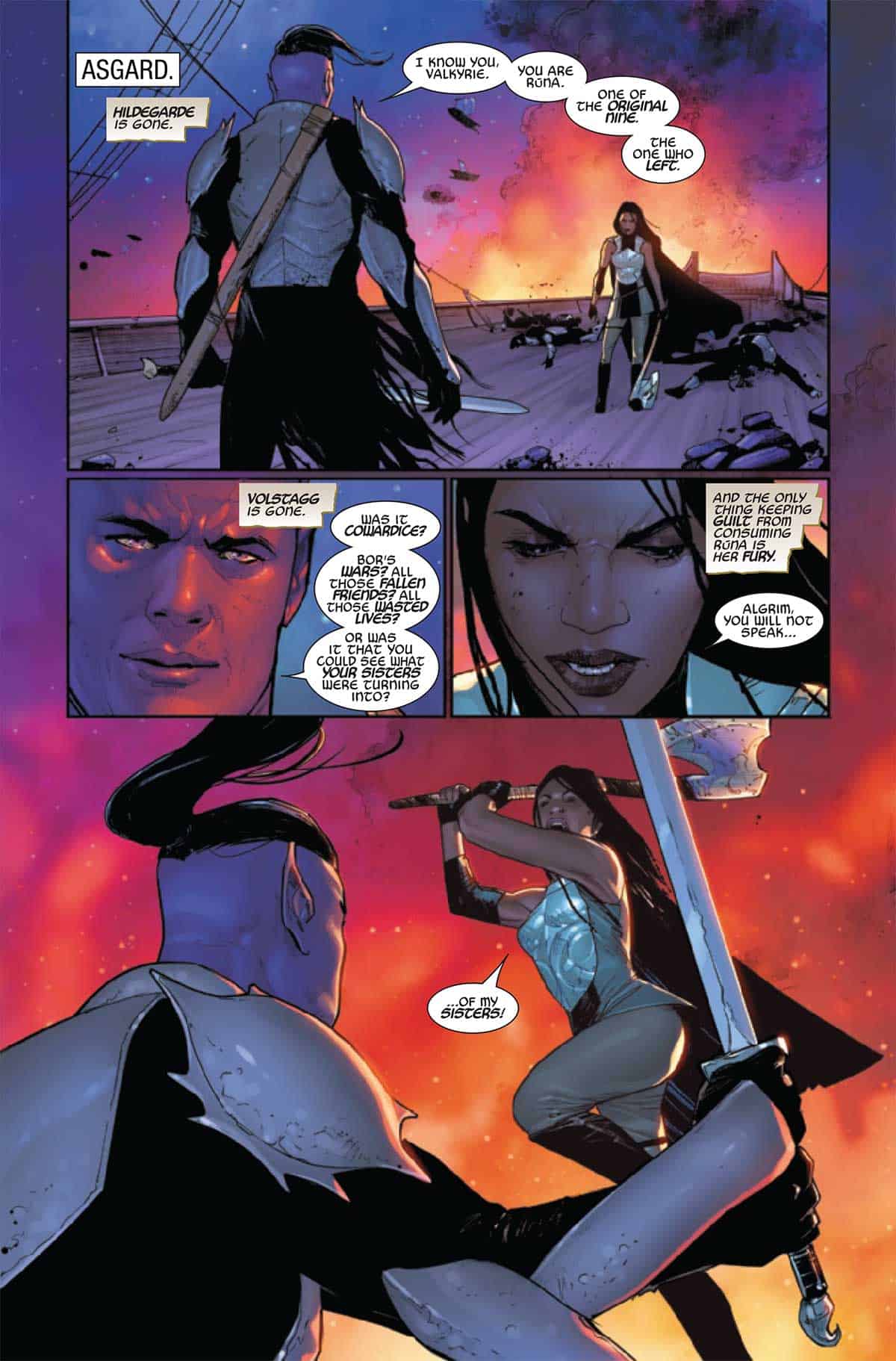 Jane Foster & The Mighty Thor is a masterful miniseries that is somehow both larger-than-life and beautifully, achingly vulnerable at the same time.