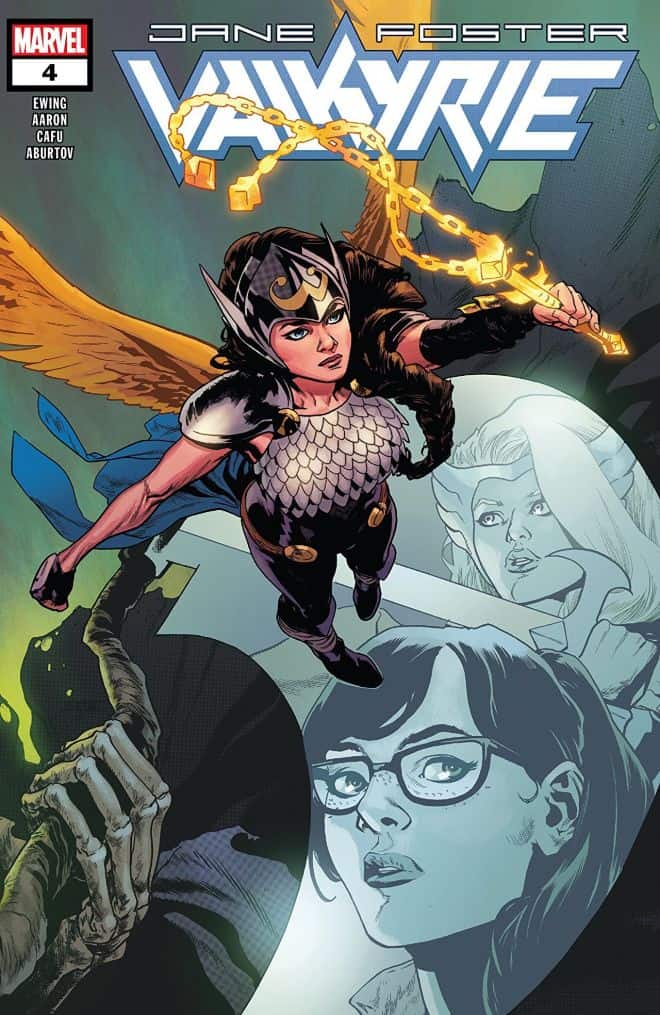 After the events of last issue, Jane is looking for answers. She goes to see the one person who may be able to help her, Annabelle Riggs. Instead Valkyrie finds herself in the middle of a mystic showdown!

Jane Foster: Valkyrie #4 starts answering the questions presented in the first two issues. Last issue, we learned Grim Reaper hired Bullseye and this issue we learn his boss is…Mephisto (that guy is popping up a lot lately). The tone is set from page one with Las Vegas smarmy Mephisto. Al Ewing and Jason Aaron continue to write every character in a way that makes me want to read more about them. Even Grim Reaper, a character I frequently don’t care for, has me intrigued. Their purple powered villain deep cut had me head to Google in a good way.

CAFU and Jesus Aburtov’s art continues to be gorgeous. In the span of one issue, they take us from hell to an expansive NYC apartment, big enough to comfortably fit a house, to a talking horse with wings. CAFU continues to amaze through the issue and I can’t think of another colorist I would like working on a fight with escapees from the purple dimension than Aburtov.

If I’m being honest, when I heard Valkyrie announced at C2E2, I wasn’t immediately interested. It wasn’t until the Valkyrie lead in story in War of the Realms Omega that I was hooked. The thing that changed was Lisa (EMT turned Damage Control side character that mentions her ex every appearance. I love when writers when they play in established continuity, something Aaron does consistently, the more obscure the better. And extra bonus points if they’re one of Marvel’s not too common queer characters. So if you didn’t know Lisa before, I don’t blame you. If you didn’t know Lisa was a lesbian it makes sense. Considering Ewing and Aaron’s grasp of continuity and that in each of Lisa’s three appearances her ex is referenced, I was surprised that the identity or gender of Lisa’s ex is not referenced until this issue with a blink and you’ll miss it line. I love adding depth to previously unexplored characters, so in theory creating a role for her outside of her one appearance as the girlfriend in distress would have been great. But since so far she is still defined by her past relationship, subduing the lesbian aspect seems…weird.

I am aware I am focusing on a small side character, but the odd way Lisa is handled is a blemish on a pretty amazing run. Ewing, Aaron, CAFU, and Aburtov craft another engaging beautiful installment with Jane Foster: Valkyrie #4. Every piece seems to fit just right with a sense of intent, making the delay and means of acknowledging a character’s orientation even more prominent. Especially on Valkyrie while Tessa Thompson stands to make Valkyrie (though not Jane) the first queer female to make it to the Marvel big screen.

Oh. And the girlfriend that is never mentioned? America Chavez, one of Marvel’s most prominent queer characters.

Ewing, Aaron, CAFU, and Aburtov craft another engaging beautiful installment with Jane Foster: Valkyrie #4. Every piece seems to fit just right with a sense of intent, making the delay and means of acknowledging a character’s orientation even more prominent.