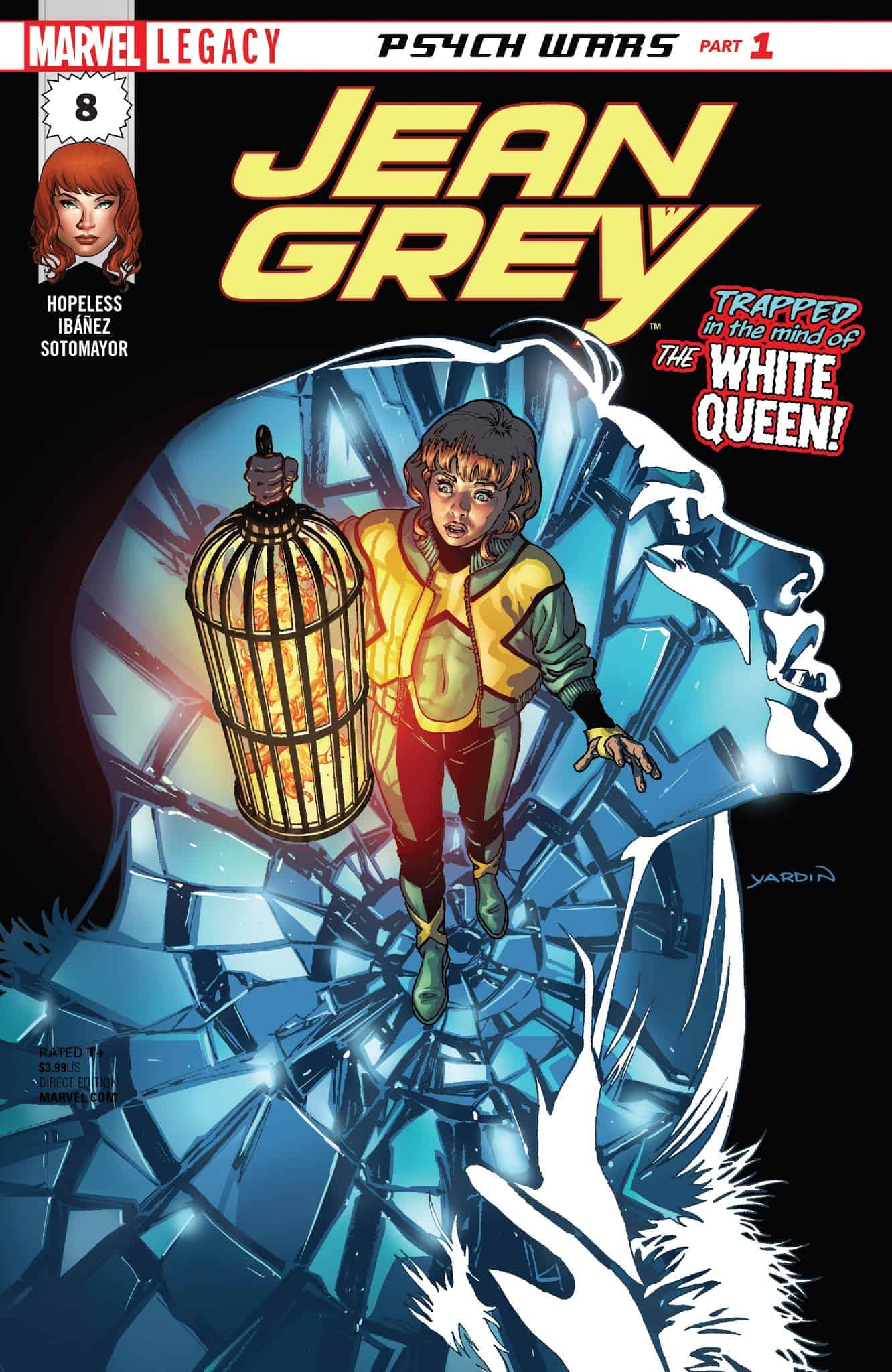 Jean heard the voice in her head. The nonstop pounding of someone desperate to be heard. That voice was in fact the long dead version of her older self. Once released, adult Jean’s spirit has wasted no time in taking the lead, and taking on… Emma Frost!

Dr. Strange had only the best of intentions. But as they so often do, plans go awry. With an incantation and a spiritual journey in which young Grey confronts herself, the spirit of Adult Jean has been set free. The spirit tried reason. The youth dug her heels in stubborn resistance, leaving her spiritual counterpart no other choice but to take control of her. Mind, body, and soul.

When Jean’s adult spirit attacked Emma and possessed her soul, she needed to dedicate all her strength to keep Frost’s consciousness locked away. This leaves teen Jean to navigate the White Queen’s mindscape. If she shows any inconsistencies in the deepest corner of Emma’s memories, those who inhabit there would launch a mass assault. Jean’s adult counterpart warns her that the youth’s lack of knowledge has a great risk of fracturing Frost’s memories and would place them both in grave danger. 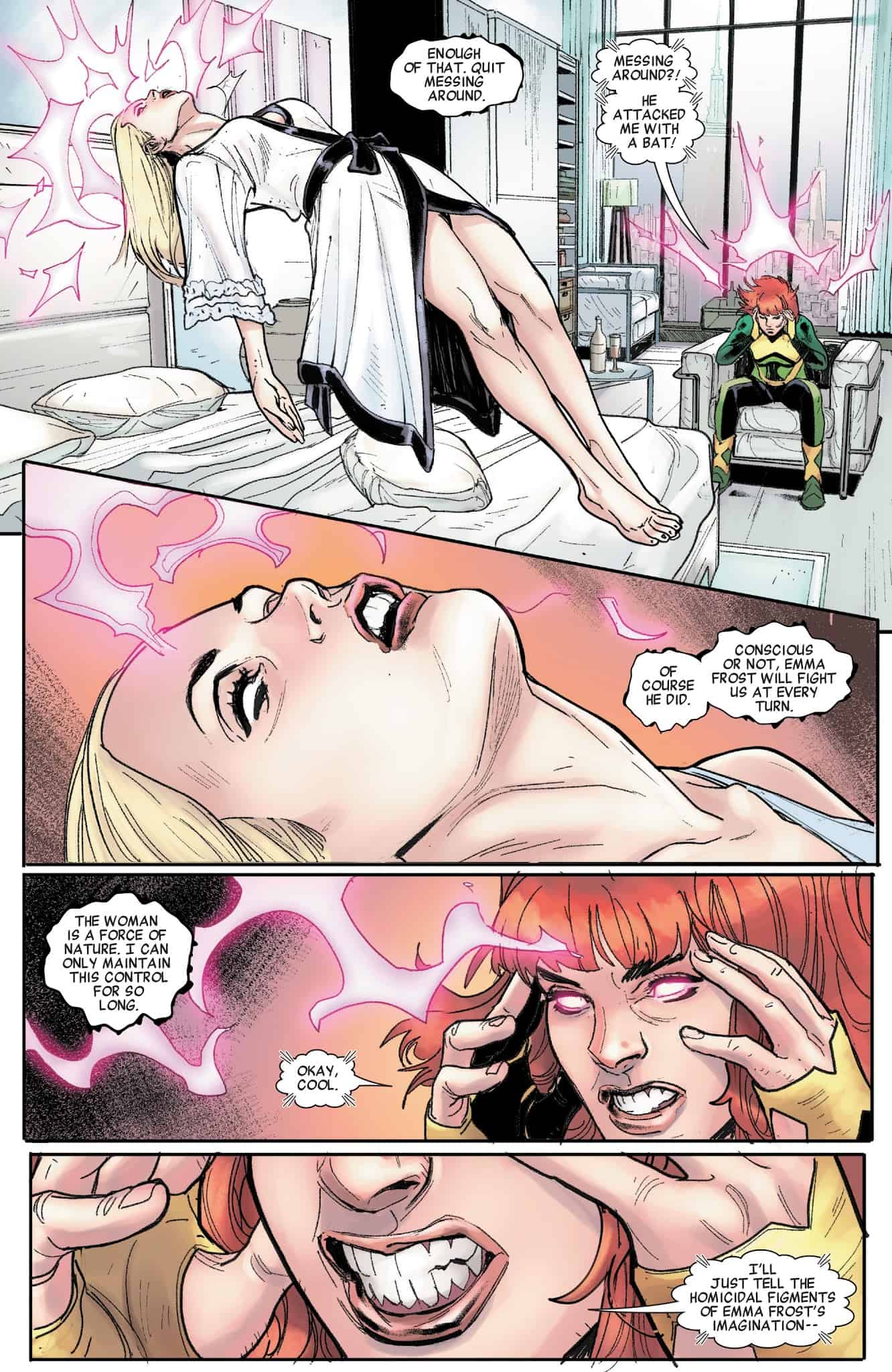 The teen does her best to fit in, but Wolverine’s sniffer ferrets her out quickly. The situation begins to deteriorate rapidly as Emma’s self-consciousness continues to defend itself at every turn. And defend she does. Frost commands her entire unit of various X-Men to take her out. 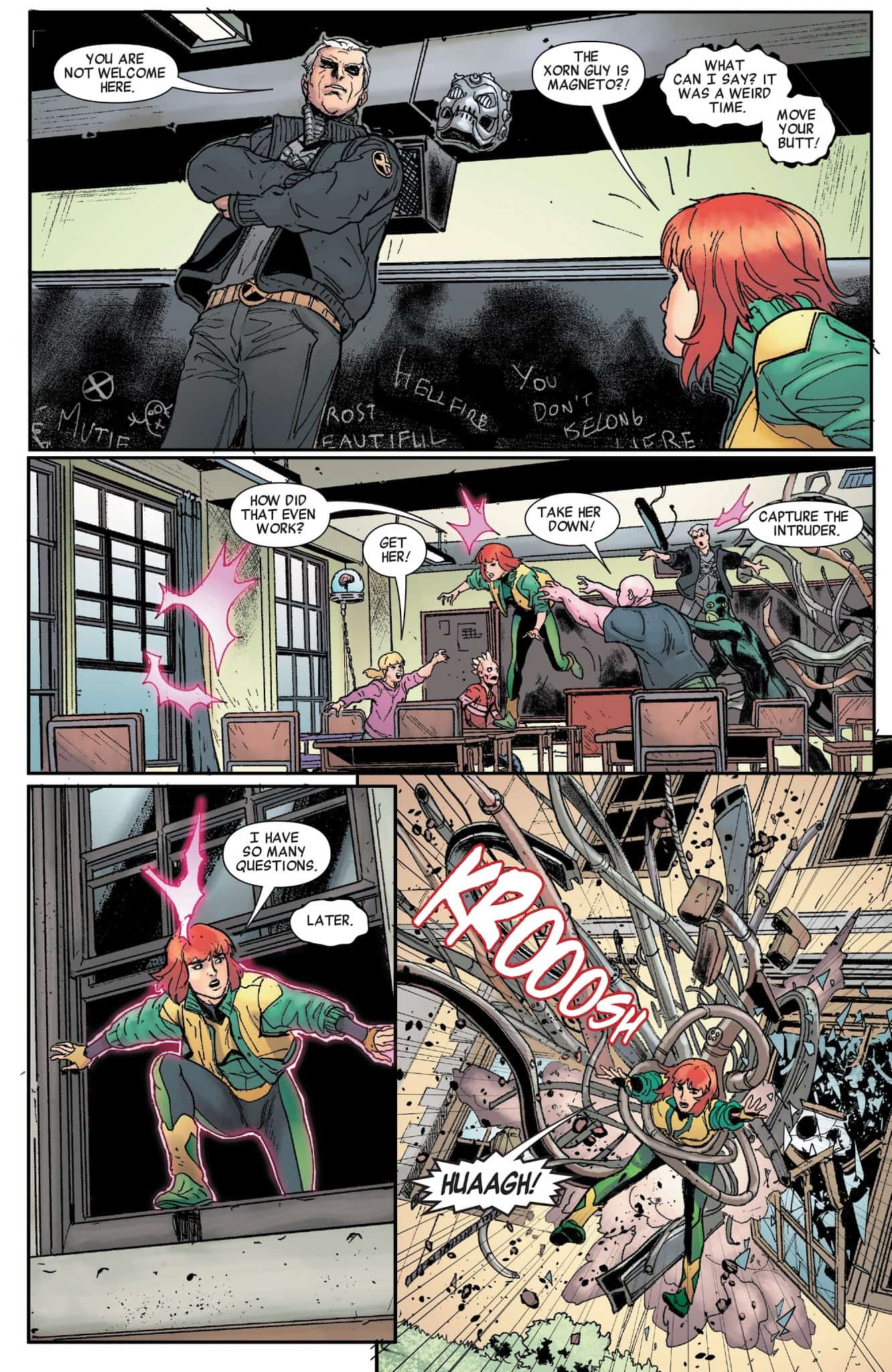 During her escape, Jean does manage to learn about Frost’s location and with the assistance of Beak and Angel, the three dash to her location. Jean finds Emma and is confronted with the moment that reveals the affair of her husband Scott, and Emma.

To teenager, the memory of the affair has no real emotional impact. She’s been there, heard about it, seen it, and could care less. That doesn’t mean Emma wants her around and quickly sets Scott upon her. Teen Jean has consistently increased in power and skill and these attributes allow her to resist Scott’s assault and dispatch him.

Finally, Jean arrives at the key moment she has been seeking. She confronts Emma but senses something powerful. Her adult counterpart confirms her instincts and despite the White Queen’s appeals, both Jeans know this is all but just a memory. Jean realizes she has found the piece of the puzzle she has been seeking. Utilizing her formidable telekinetic power, she shatters the memory of Scott, the means in which Emma has hidden the fragment of the Phoenix. Once released, Jean assimilates the sliver of the Phoenix’s cosmic identity into herself. 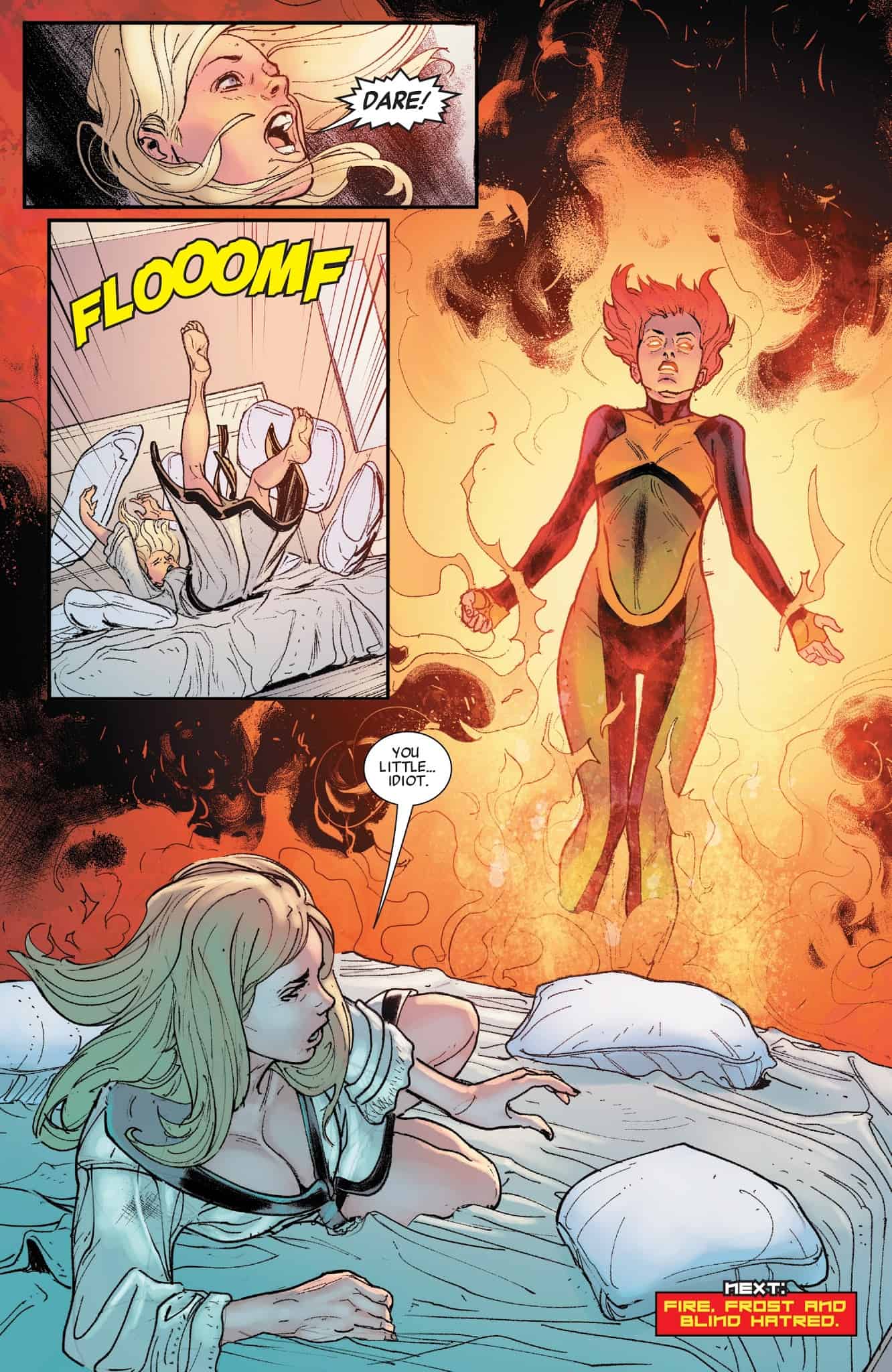 Issue #8 follows a slightly disappointing filler story of the Scarlet Witch in issue #7 which Hopeless begins to regain his stride. The trip into Emma’s psyche was not exactly what I was hoping for, however. The Morrison run is my least favorite period in X-Men history. Grant Morrison’s mark on the X-Men is pretty divisive. You either loved it or hated it with very few fans left in the middle. Many fans liken his contribution to the esteem of Chris Claremont in terms of influence and importance whereas detractors find the period an outright disaster with confusing and convoluted plots mixed with total disregard for previous character traits and continuity.

Though I did enjoy the issue and the various appearances in which Hopeless utilizes them to propel the story forward, I was left disappointed.

In the initial pages, Jean explains to her younger counter that they are in the deepest recesses of Frost’s memories. Though I understand the play to the rerun the affair for the purposes of a tie-in between both central figures, I closed the book with longing frustration. If this was indeed the revisit of her utmost traumas, many of them were omitted, chief among them was the slaughter of her first students, the Hellions at the hands of Trevor Fitzroy in Uncanny X-Men #281. This event haunted her for decades and I was particularly disappointed that this paramount moment in Frost’s life was entirely ignored. Not only was her mutant team murdered, but the entire student body of the former Massachusetts Academy. One might argue that Jean would have no connection to this. If so, they would be entirely wrong. Let’s not forget that Jean herself nearly died and saved herself by swapping her mind with Emma’s during the termination assault of Fitzroy’s enhanced future Sentinels. She felt and remembers well her fear and horror. 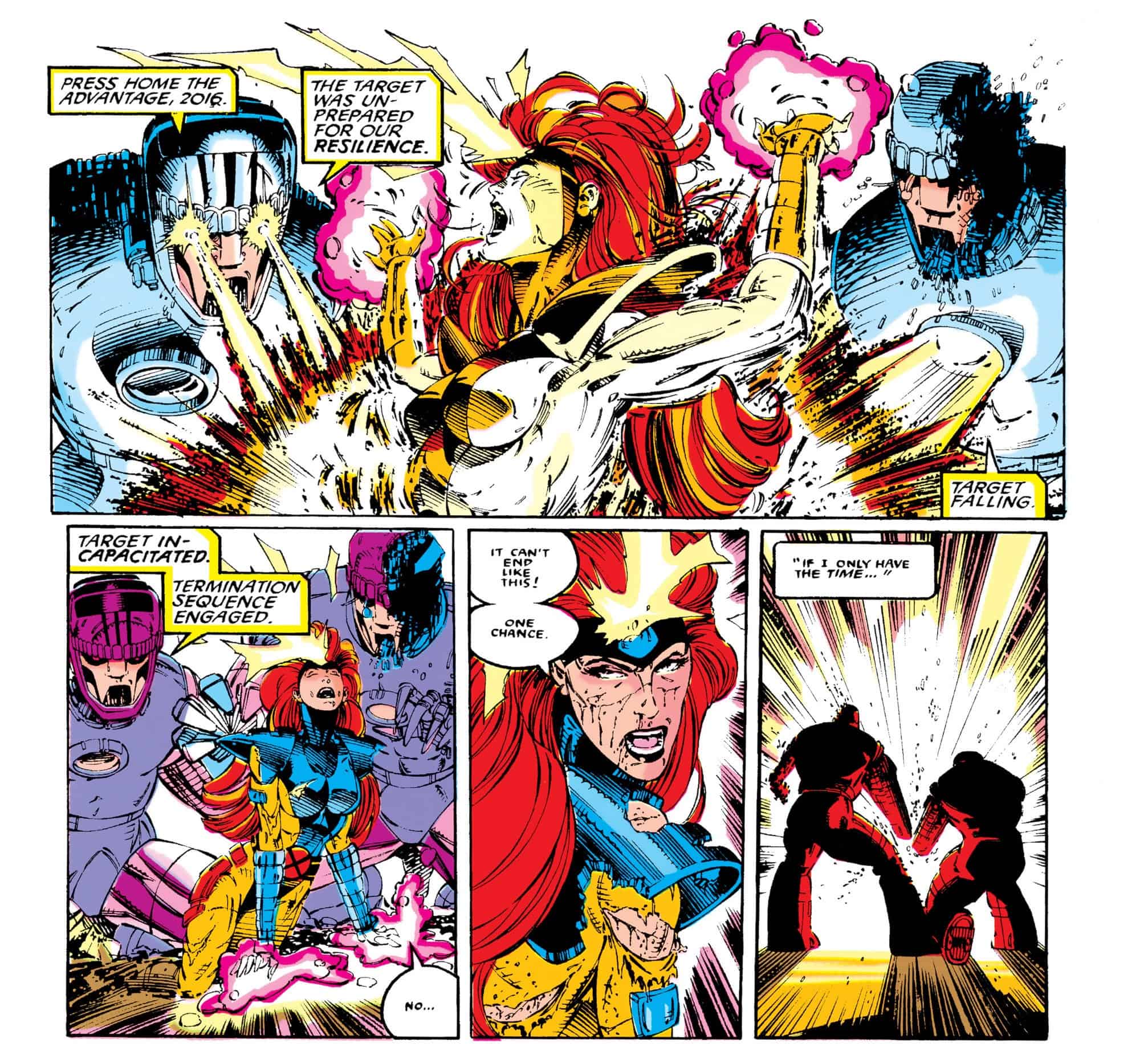 Though her weaker moments are rarely demonstrated given her superior and aloof exterior psychological displays, Frost’s tragedies didn’t end there. As a teacher, Emma continued to lose her charges including many of the Generation X alums and Academy X wards. The choice to focus solely on the affair of Scott and Emma I believe from my standpoint of examining human behavior wouldn’t be as significant and certainly not the sole nucleus of an entire storyline.

I did find enjoyment in the issue concerning the manner which Hopeless intertwines the years old backstory of the affair into the modern plot which influences future characters like Jean and the ingenious “retcon” of sorts in which he reveals that Emma hid a fragment of the Phoenix’s essence in Scott himself. Some could now contend that doing so provides at least a weak context and overture to his later position as its host.

I will say that the illustration provided Victor Ibanez is far superior to the vast majority of artists who were included in Morrison’s entire tenure, which I’m sorry, was probably, in my opinion, the lowest point in X-Men history artistically and certainly not to the caliber in which I believe an artist should wield being employed on a flagship and prestigious book.

Final Thought: Issue #8 has many interesting qualities but strikes some low points by omitting key events in Emma’s backstory in lieu of the paramount objective to intertwine Jean’s personal journey and the central Phoenix plot.