Jennifer Blood #2: They All Say That I Am Dead 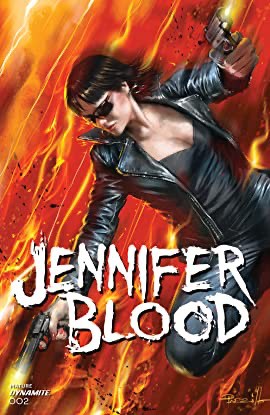 There's a new sheriff in the criminal-run town of Bountiful, and it's Giulietta Romeo, Europe's top hitwoman!
Giulietta's hot on the trail of Jennifer Blood, and needs to get her hands on the legendary vigilante's "war journal" to help her--but the crooked judge who has it wants to strike a deadly bargain for it!
It's the annual Fourth of July celebration in Bountiful, and you can bet Jennifer Blood is bringing the fireworks!

This story is full of twists and turns.  Jennifer Blood appears to have a righteous vendetta against the citizens of Bountiful.  This is also a chess match between Blood and fellow assassin turned sheriff Giulietta Romero.  It appears that Jennifer Blood has the upper hand in this feud at least for now.

This particular story also may be a commentary on the current Texas law banning abortion.  The law is referenced including the unlikelihood that a woman can know she is pregnant in the time frame that the law describes.  I believe this is bold writing and can and should be achieved in a more mature story.  This is a great use of this art to explore political issues such as this one.

This is definitely a story for the more mature.  There are descriptions of sexual assault and suicide and Jennifer Blood is on a mission to avenge all those victims and she does it in brutal and bloody ways.

The art is also of a more mature nature.  The violence is on a very high level including the depicting of the gore that results.

The art has a realistic flair that leans to the brutal which fits this story.  Both the antagonist and protagonist are brutal in their methods and the secondary characters mostly have sketchy backgrounds and pasts.

The writing and the art along with the story lines are great draws that adds a sense of urgency, danger and realism in this fictional setting.

This story is full of twists and turns.  It is also proving to be a chess match between two very capable assassins.  Definitely not for the faint of heart

Jennifer Blood #2: They All Say That I Am Dead