Jennifer Blood: Bloodlines #1-5: Is There Anyone Righteous in Bountiful? 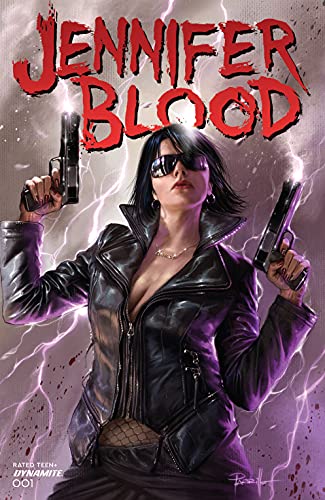 The town of Bountiful, a Federal haven for the witness protection program is having a drop in population.  The residents are being found dead with the initial JB next to their corpses.  Jennifer Blood is dead, she died in prison.  Who is this new Jennifer Blood and can the new Sheriff who is just as vile as the townsfolk stop her rampage?

The town of Bountiful is filled with the most wretched of life. These low life’s somehow struck deals with the Feds, and that does not lead to justice. The idea that Jennifer Blood is is justice. All the characters, including the “sheriff” tasked with hunting down this ghost assassin, have a rap sheet that is a mile long, and it is not for minor crimes either. It is for sex crimes, human trafficking, drug pedaling, murder, rape; you name it; these people have done it, and they are living free and with impunity in Bountiful. Even the Feds, who are tasked with watching these pieces of human scum, are on the take. The episode called “Piss Day” shows that very clearly. There is no interest in the drug testing, but there is interest in the bribe money that is given to the Federal agents.

We cannot root for the law or the citizens of Bountiful, but we can root for the heroine, who is revealed to be the daughter of the original Jennifer Blood. Only she can dish out the justice that so many people have been robbed of, all for witness protection.

The art is brutal and graphic. These books have a mature rating, and that rating is necessary. The art is not pretty to look at, but it has its subject that makes this brutal artwork necessary in the telling of the story of bloodlines. There is a cartoony style that makes the violence easier to take in, but it does not affect the brutality of the action. Both sides in the final battle are wounded, and there is a lot of collateral damage, which may or may not be all that collateral.

This is a brutal but timely story given todays issues of crime and law enforcement.  This story needs to be told for the lost victims who have had any semblance of justice removed from them.  There is a catharsis to see some of the vilest people get their just deserts.

Jennifer Blood: Bloodlines; Issues 1-5: Is There Anyone Righteous in Bountiful?