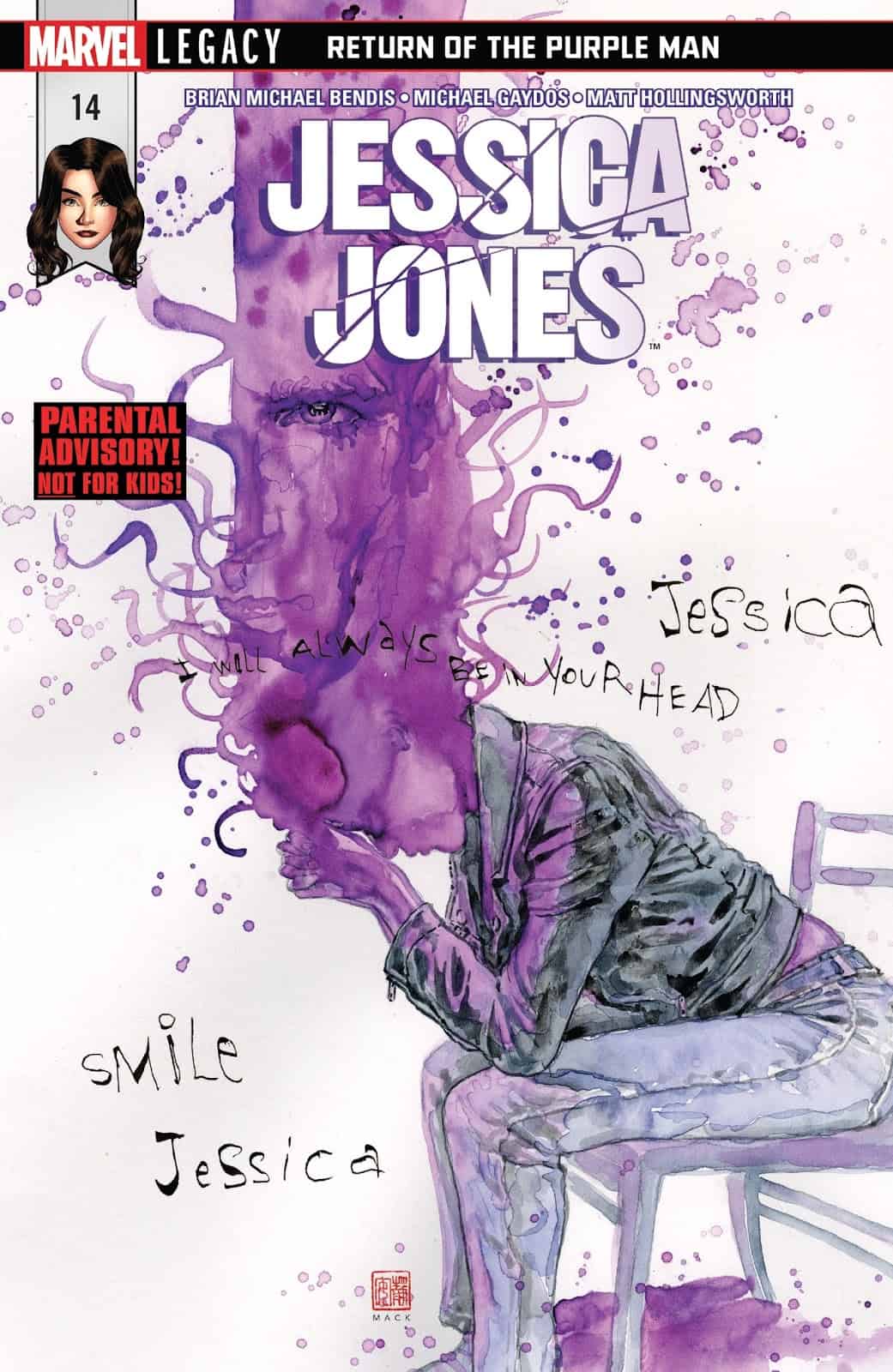 The Purple Man has returned using Jessica’s family against her in order to get what he wants. But what DOES he want? And does Jessica have her own plan?

Jessica Jones has abandoned her former superhero life as Jewel to find some normalcy. She has started her own Private Investigation firm, Alias Investigations, married former Avenger Luke Cage, and together they have a little girl, Danielle. However her tragic past as the victim of The Purple Man, Zebediah Kilgrave, a psychopath with the ability to compel people to do whatever he says, always haunts her. This trauma causes her to deal with Post Traumatic Stress Disorder and, for a while, alcoholism. Jessica has spent the last few months destroying and reuniting her family, working undercover for SHIELD, losing her office to an explosion caused by Maria Hill, and dealing with a twisted murder perpetrated by a man claiming to be from another dimension. On top of it all, she has just learned that Kilgrave has escaped from Ryker’s Island Prison and SHIELD custody. Panicked, she enlists the help of her best friend, Carol Danvers, aka Captain Marvel, to get her a safe house that belonged to Nick Fury. Jessica fears Kilgrave has taken control of everyone she’s come into contact with. But she has just found that he has taken control of the one person she didn’t expect: her child.

Luke Cage, deciding to retaliate against the Warden for not informing anyone Kilgrave had escaped, has landed on Ryker’s. The guards quickly fire with no results. Captain Marvel flies in ordering the men to cease fire and calms Luke, advising this isn’t the way to help Jessica.

Meanwhile, back in the secret bunker, Kilgrave uses Danielle, Jessica’s daughter, to speak with Jessica. He taunts her, telling her the voice in her head convincing her she doesn’t get to have a normal life was right all along. She’s better than that. Smarter than that. Jessica reflects on the fact that Kilgrave lives to put her in these impossible moral quandaries. If she grabs her daughter he’ll kill her, if she doesn’t he may use Danielle to kill Jessica. Jessica threatens Kilgrave not to take another moment of her daughter’s life. He agrees if he is allowed to meet with her face to face. Jessica concedes and Kilgrave quickly lets Danielle go. 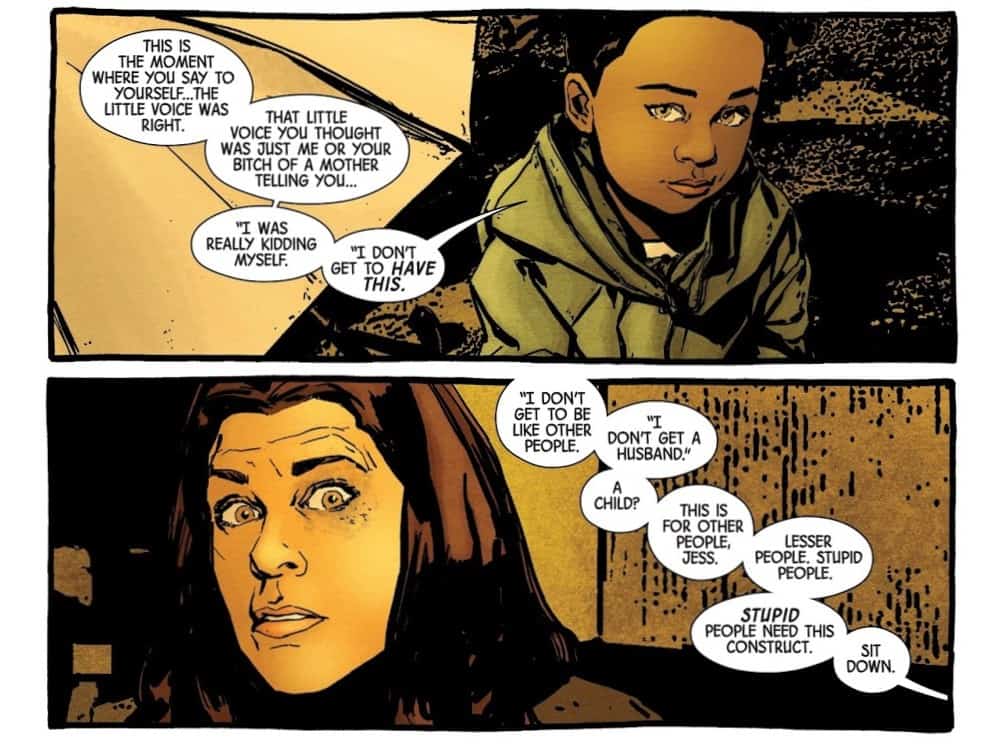 Jessica takes her daughter for ice cream and contemplates if Dani is really no longer under Kilgrave’s command. Jessica quickly decides this can’t happen again, and once again leaves Dani in the hands of Carol and Alpha Flight in their newly rebuilt headquarters just outside Earth’s orbit.

Carol returns Jessica back to earth and asks what the plan is. Jessica tries to dismiss Carol so that she can take care of the situation alone. Carol requests a moment to be selfish and confesses the last time Kilgrave took her was not only the worst thing to ever happen to Jessica but the worst thing to happen to Carol. Jessica indicates that everyone around her is a weapon for Kilgrave, but Carol counters that they are also her weapons against him.

Danny Rand has flown himself and Luke to Madripoor at Jessica’s request. Jessica struggles to apologize to Luke, expressing that this is her “shit” to deal with. He denounces the thought and says that it’s all both their “shit” now. Luke asks Jessica to take care of it but asks if they can have a date night the following day. She agrees as long as she can take care of the situation before tomorrow.

Jessica arrives at the meeting spot she has agreed upon with Kilgrave, a small abandoned bakery. Jessica reflects on everything that has gone wrong in the past few months as she waits for Kilgrave. He enters to the sound of a ringing bell hung over the door. Jessica laments that Kilgrave has now ruined bakeries for her forever. 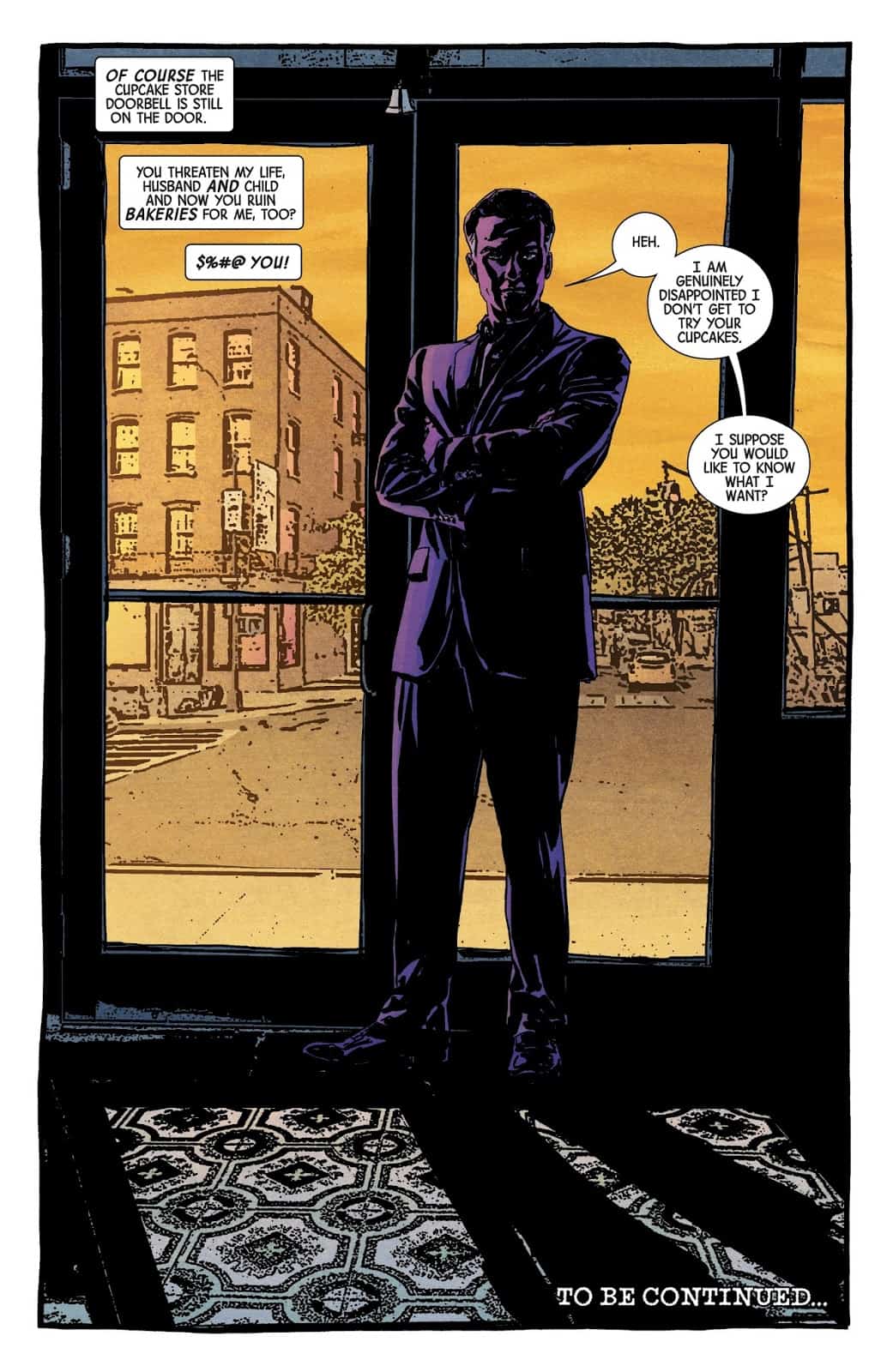 Jessica’s history is one of the most twisted origin stories in comics. The psychological aspects of her PTSD are always well represented in her actions. She is quick to protect everyone around her before herself. She spends the entire issue worried about others, especially her daughter,  but is quick to give herself up to assure their safety. This is what makes Jessica a hero regardless of her lack of spandex or code name.

Kilgrave, on the antithesis, is ruthless in his attempt to get at Jessica. He uses Jessica’s personal weaknesses to manipulate her into meeting with him. He has no remorse for his actions, and can truly be labeled as a psychopath. Everything is only a means to an end for his desires.

It’s clear why these two really work well together. Kilgrave is a perfect antagonist for Jessica not only because of his place in her origin, but because her personality dictates she has many weaknesses for him to exploit without using his abilities. It’s always hard to avoid drawing a comparison between their relationship and that of an abusive ex-boyfriend or husband. Kilgrave even uses Jessica’s own child against her, a classic move in similar situations.

Jessica is merely attempting to be a modern working mother. While her family was mostly built by accident, her desire to keep it together demonstrates the love and affection she has for her current direction. Kilgrave tries to exploit this as a social construct that Jessica is above, reducing the nuclear family to a stupid or lesser person’s dream. He is gaslighting Jessica’s belief in her family and entitlement to normalcy in order to manipulate her into a meeting. Jessica’s history as an abuse survivor allows this to work, but she clearly has her own plan as well.

Final Thought: Bendis is finishing up what might be his last arc of Jessica Jones. It would seem he is attempting to go out exploiting the most interesting relationship in Jessica’s history. The manipulation is authentic and intimate as a result of the last 17 years of character development with each character. They truly bring out the best and worst in each other.