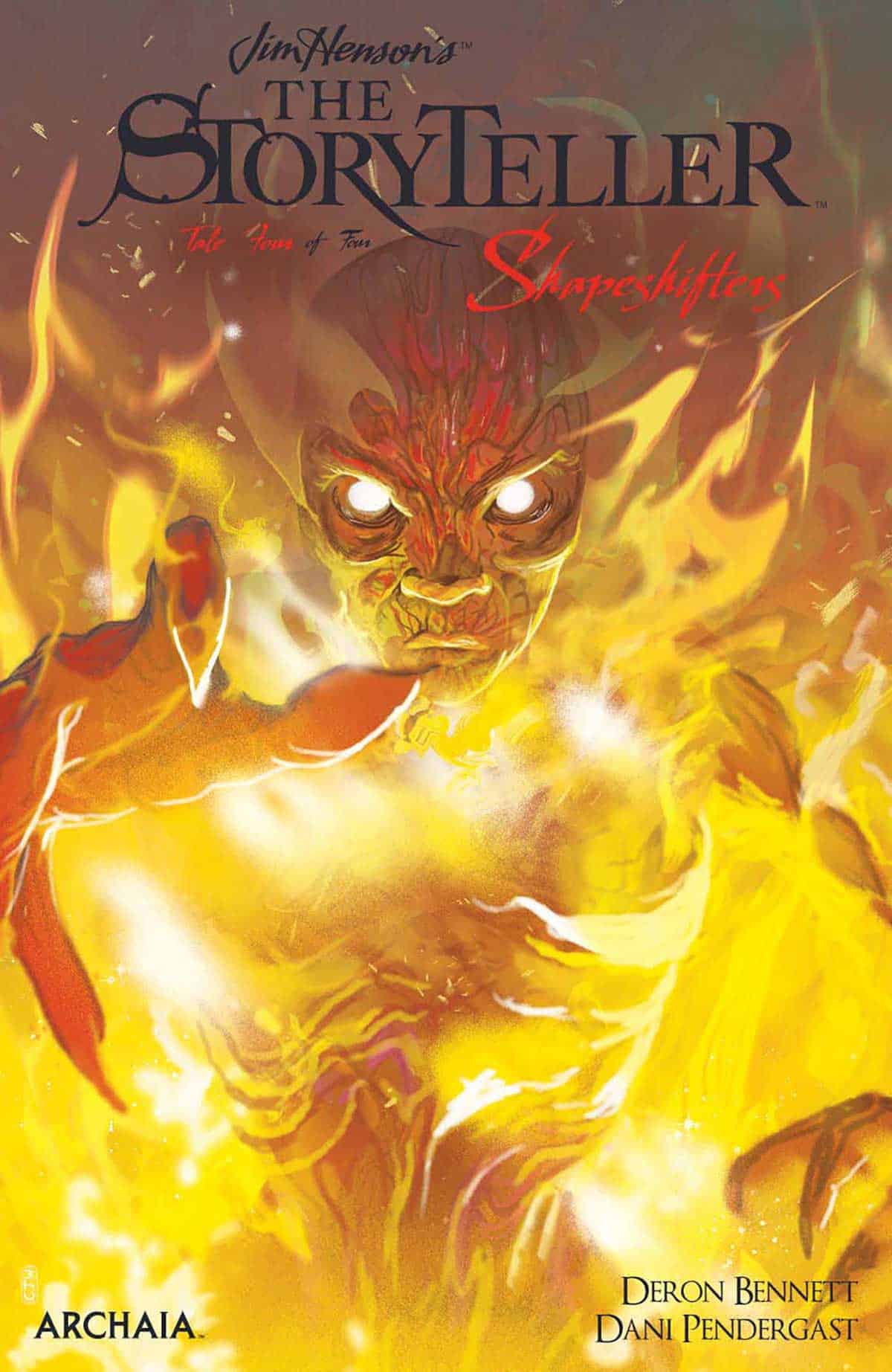 From blood-sucking fire demons to fox-women, Jim Henson's The Storyteller: Shapeshifters brings together an array of talent to share a variety of myths and legends about shapeshifters.

Like dragons, ghosts, and trickster figures, shapeshifters are something of a constant in global myths and legends. A smattering of these tales are showcased by the most recent Jim Henson’s The Storyteller anthology miniseries, which this time makes shapeshifters its focus. While shapeshifters can feel omnipresent, their roles can differ vastly between stories and cultures, as this series highlights over the course of four wide-ranging issues. 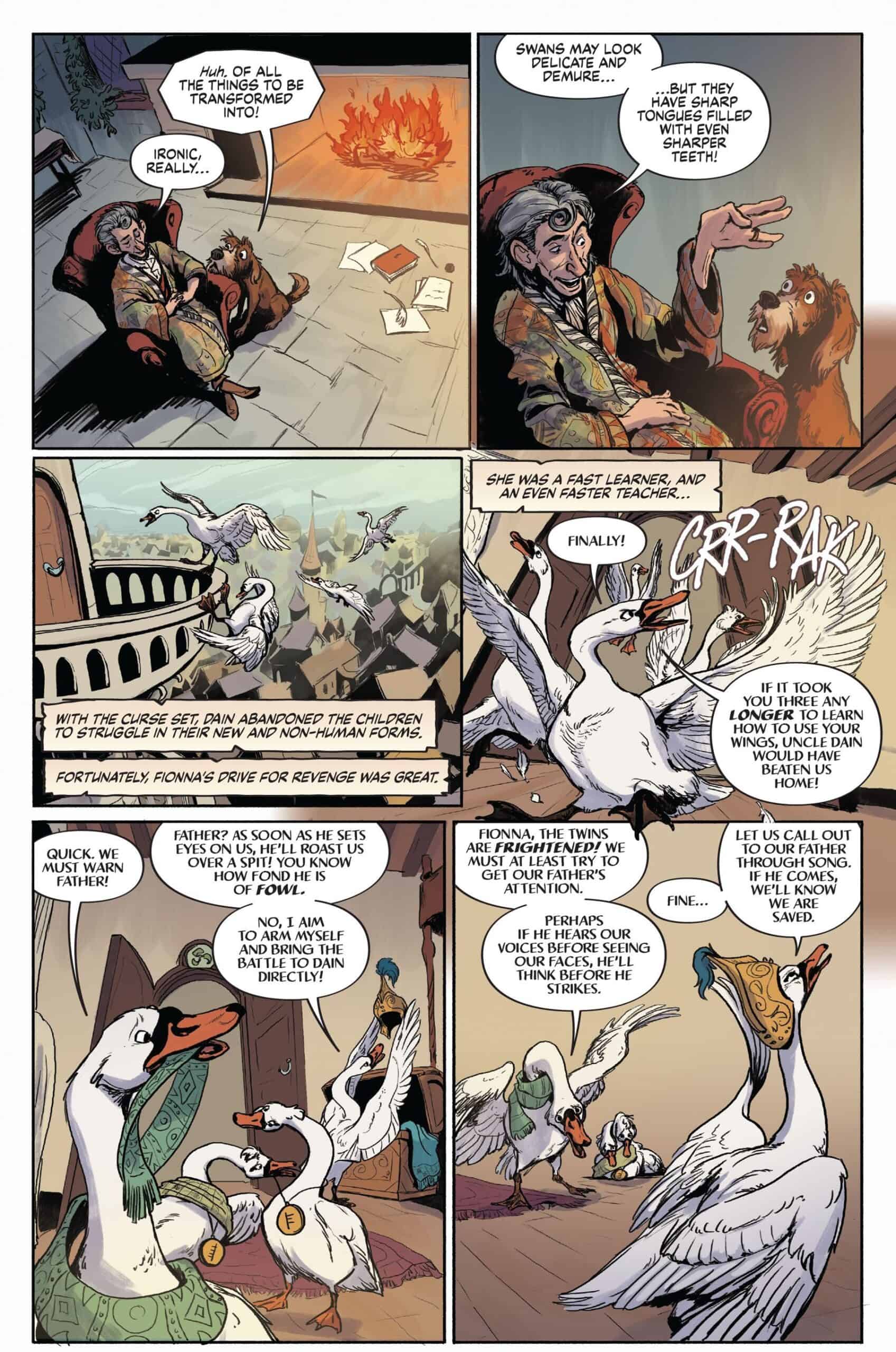 The first story, “Children of Lir” (Andre R. Frattino, Nori Retherford, Kieran Quigley, and Jim Campbell), recounts a post-Christian Irish myth of four children turned into swans by their uncle. Of the four comics, “Children of Lir” most resembles a morality tale, with the children learning humility and nonviolence before meeting a monk who saves their souls so they can die and go to heaven. While Andre Frattino’s narration feels rather dry, Nori Retherford’s artwork is reminiscent of 1980s fantasy cartoons like The Black Cauldron and The Last Unicorn. Rutherford deftly threads the needle between realism and simplification when drawing talking swans and adds some delightful creative flourishes, such as depicting swan song as music notation with a swan’s head emerging from the end of the staff. Occasionally, Retherford’s artwork can feel unpolished or inconsistent: the uncle, for example, has a high forehead in some panels and a practically nonexistent one in others. Nonetheless, the characters feel wonderfully expressive in their faces, gestures, and body language. Kieran Quigley’s colors lean towards the naturalistic, favoring dull blues and greens that ground “Children of Lir” in a setting that feels truly – albeit drearily – Irish. 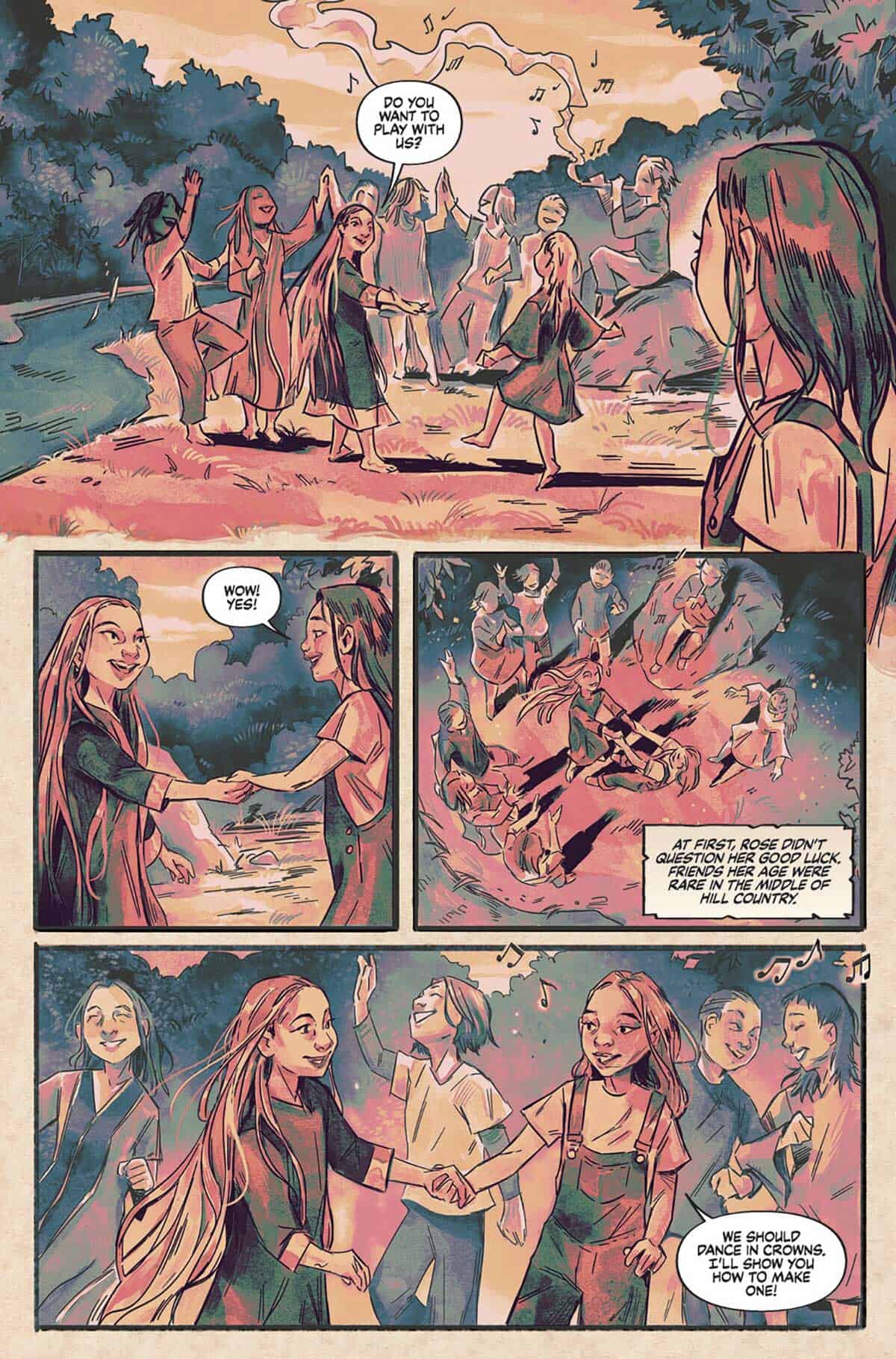 Like “Children of Lir,” the series’ second story, “The Dancers” (Darcie Little Badger, Alexandra Fastovets, James Fenner, Jim Campbell), focuses on the relationship between two cultures through the people caught between them. But while “Children of Lir” depicts a positive shift that leads to moral improvement and redemption, “The Dancers” depicts the tragedy of one’s culture being erased by colonization. The comic follows Rose, a Native American girl taught to dance by shapeshifting reeds growing at a nearby stream. Darcie Little Badger’s writing is beautiful and bittersweet, emphasizing the joy of connecting with one’s culture and connection to the land, but also the resulting grief of environmental destruction and losing touch with one’s culture. Rose’s struggle isn’t against her own moral failings but against a world view that has failed both her and the environment. Alexandra Fastovets beautifully captures the story’s bittersweet sentimentality in both facial expressions and scenes of Rose dancing with the “reed people,” while James Fenner’s limited color palette of oranges, pinks, and purples casts a haunting tone over the entire tale. 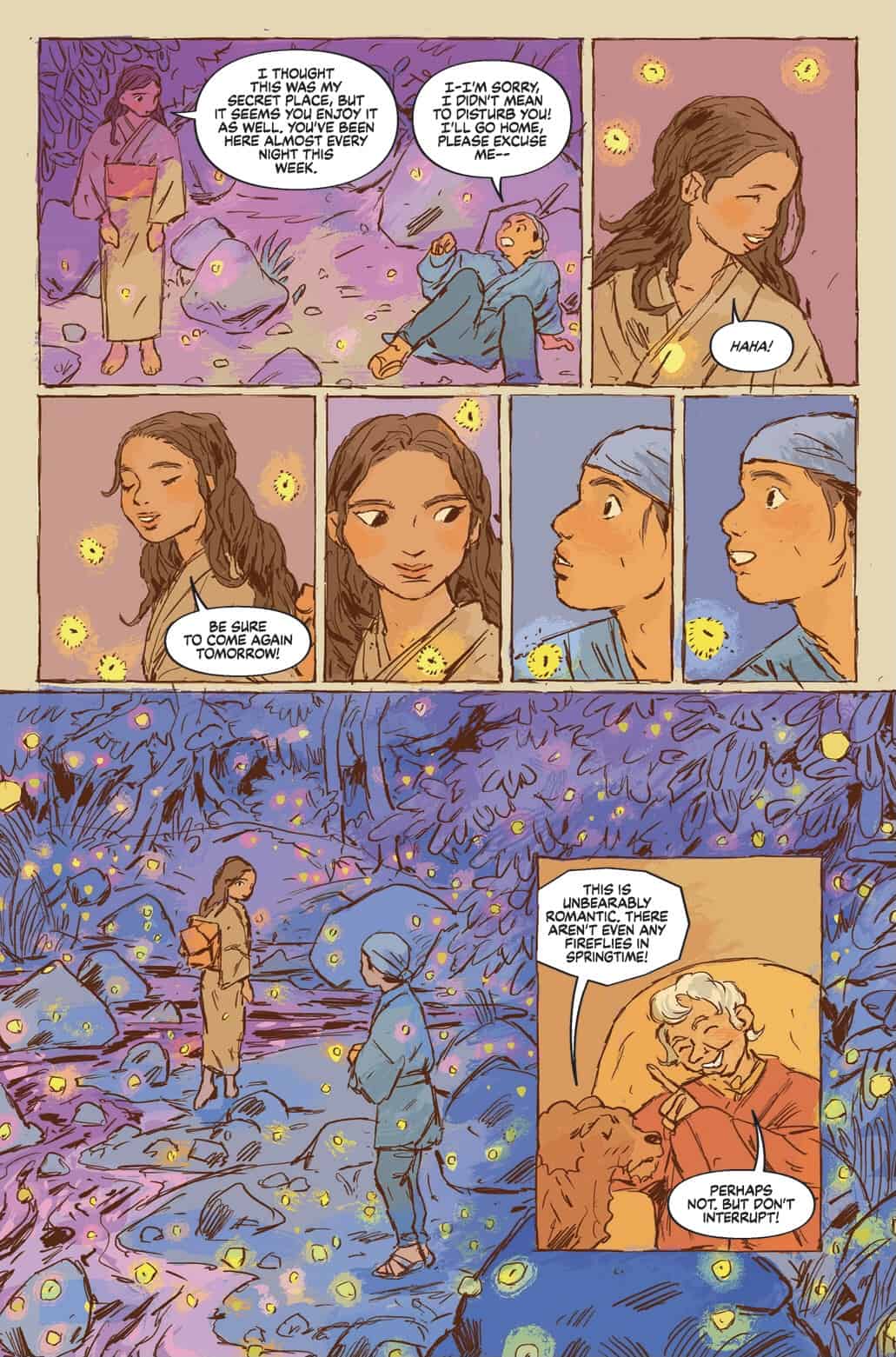 Similarly dominated by natural imagery is the third story, “Come and Sleep” (Emilia Cilento, Jim Campbell), which offers a love story between a man and a kitsune – a Japanese fox spirit who can shapeshift into a woman. Of this four-issue miniseries, “Come and Sleep” holds the unique claim of being the only one written, drawn, and colored by the same person: Emilia Cilento. Cilento is a talented visual storyteller, especially when it comes to depicting animals and nature scenery. Cilento’s loose linework runs the risk of being difficult to read at moments (i.e. when the couple first meet at a riverbank, the figures, fireflies, and forest are all given equal visual weight by the linework). However, her use of color throughout “Come and Sleep” pulls those moments back from the brink and takes the artwork to another level. Spring is dominated by green fields and pink blossoms, autumn by golden wheat and cornflower blue. Changing color palettes to echo the change of the seasons, Cilento crafts an intimate tale of long-lasting love. The final tale, “Ole Heg” (Deron Bennett, Dani Pendergast, Jim Campbell) takes readers to Belize, where a little girl named Ruthie tries to save her mother from the clutches of a bloodsucking, shapeshifting fire demon called Ole Heg. Of the four stories, “Ole Heg” expects the most of its readers. While “Come and Sleep” has the Storyteller explain to his dog what mochi is, “Ole Heg” neither explains what type of fruit “kinep” is nor offers mythological context for a talking tree named Bazil. (With some googling, it’s possible to learn that Bazil is a demon of death who was imprisoned in a tree by a carpenter.) Writer Deron Bennett privileges Belizean culture – the culture of the myth and its characters and tellers – rather than Boom’s mostly American (and probably mostly white) audience. This lack of cultural contexts may be frustrating, but also allows Bennett to maintain an upbeat pace in a chilling tale. Dani Pendergast’s character design for Ole Heg is haunting, artfully combining the humanoid with the elemental. Pendergast’s work truly shines in the ending as wide-eyed Ruthie hides in the purple shadows watching the glowing orange Ole Heg plot her mother’s demise.

As with previous Storyteller anthologies, Shapeshifters beautifully captures a vast range of emotions, cultures, and creators in a small package. I for one can’t wait to see what comes next.