In Gotham City, where heinous acts of violence are a daily occurence, the GCPD relies on Harley Quinn, a young forensic psychiatrist and profiler, to consult on their toughest cases. But Harley is haunted by one unsolved case—the night she discovered her roommate's body marked with the signature of a notorious serial killer known as the Joker.

Five years later, the case remains unsolved and a new series of horrific murders occur throughout the city. As the murders escalate, Harley's obsession with finding the depraved psychopath reponsible leads her down a dangerous path. When the past and the present finally collide, Harley has to decide how far she is willing to go—and how many lines she is willing to cross—to solve these cases once and for all.

Joker/Harley: Criminal Sanity kicks off the nine-issue miniseries with a dark and gritty tale grounding both Harley Quinn and Joker into a real life crime drama akin to some of the most popular criminal documentaries today. Does the real life horror approach prove to be successful using the notorious combination of Harley and Mr. J though?

Unfortunately, the first issue doesn’t exactly come out swinging, making it a rather difficult decision to continue with the rest of the series. DC’s Black Label has so far proven to be a truly worthwhile initiative with a few hits already, including the recently released Harleen #1 from Stjepan Sejic which also features a new take on the ever popular Harley Quinn character. There is a lot of really stellar noir artwork in Joker/Harley: Criminal Sanity #1 which is ultimately the best aspect of the book, but the story simply leaves too much to be desired.

Harley is a character who has had a LOT of exposure over the last few years, and series just like this serve as a reminder for just how much storytelling potential she really has. However, the character that we find in issue #1 is so dissimilar to any approach to Harley we have seen in the past that she just feels like someone else entirely. Dr. Harley Quinn, a profiler who is helping with a murder case, seems to only share the name with the character we all know and love as she dives into the psychological depths of some of history’s most horrendous killers.

It’s interesting that this series released so soon after Harleen #1 which is also an exploration of Harley before the influence of the Joker, but is set more firmly in the DC Universe. Joker/Harley: Criminal Sanity #1 feels more like an Elseworlds title than anything else, but it lacks a strong hook to bring readers in and keep them engaged all throughout. This is a story that we have seen before, but the spin is geared towards the dichotomy between Harley and Joker. The problem is, the first issue doesn’t really go into their specific conflicts. Instead, we see Joker as just another crazy killer and Dr. Harley Quinn as just another inspired good citizen trying to root out information on the criminals. Outside of an immediately noticeable calling call, there really isn’t that much to separate this story from other crime dramas on shelves, and that’s a shame considering just how dynamic the artwork really is. 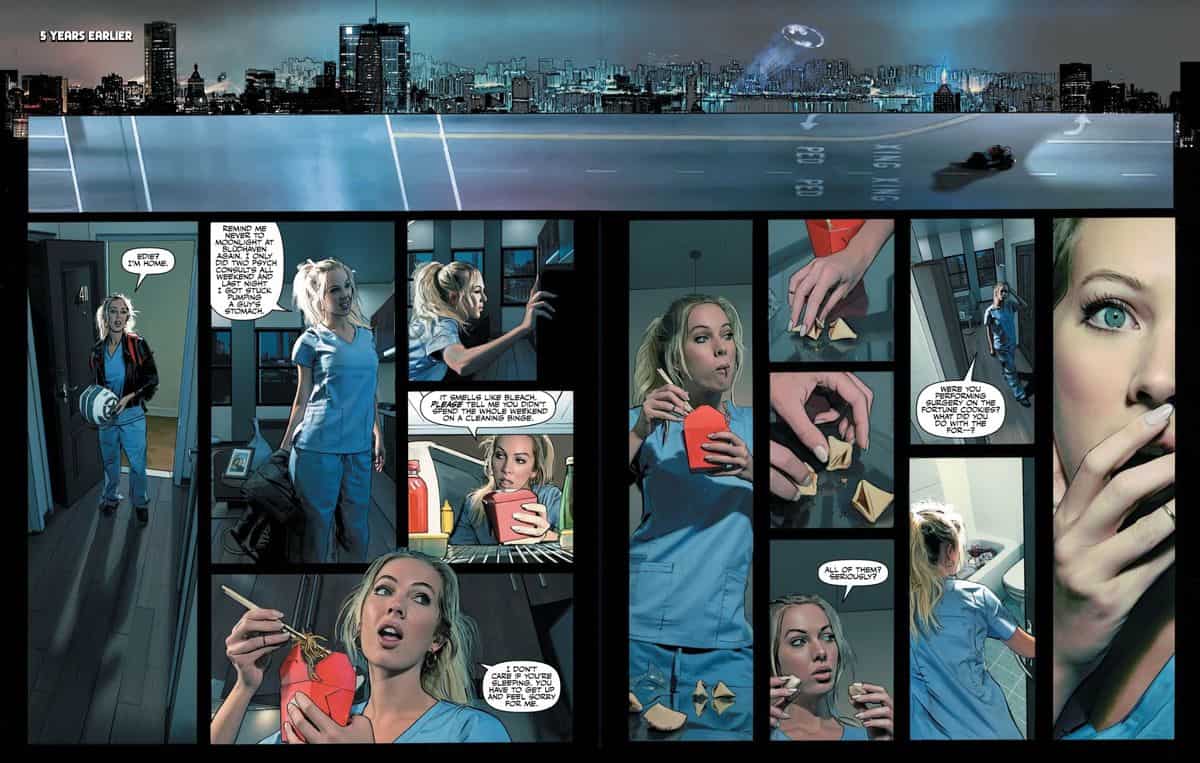 The well-researched psychological insight, drastic use of colors, time jumps, gritty tone and even uniquely original cast of characters just aren’t enough to save this book from the pitfall of just not being all that entertaining to read. Fans of serious crime noir stories that aren’t deeply rooted in superhero antics might find more to enjoy here, but the first issue didn’t leave me very excited for what’s to come.

The well-researched psychological insight, drastic use of colors, time jumps, gritty tone and even uniquely original cast of characters just aren't enough to save Joker/Harley: Criminal Sanity #1  from the pitfall of just not being all that entertaining to read.