Justice League #60: What Makes a Hero? 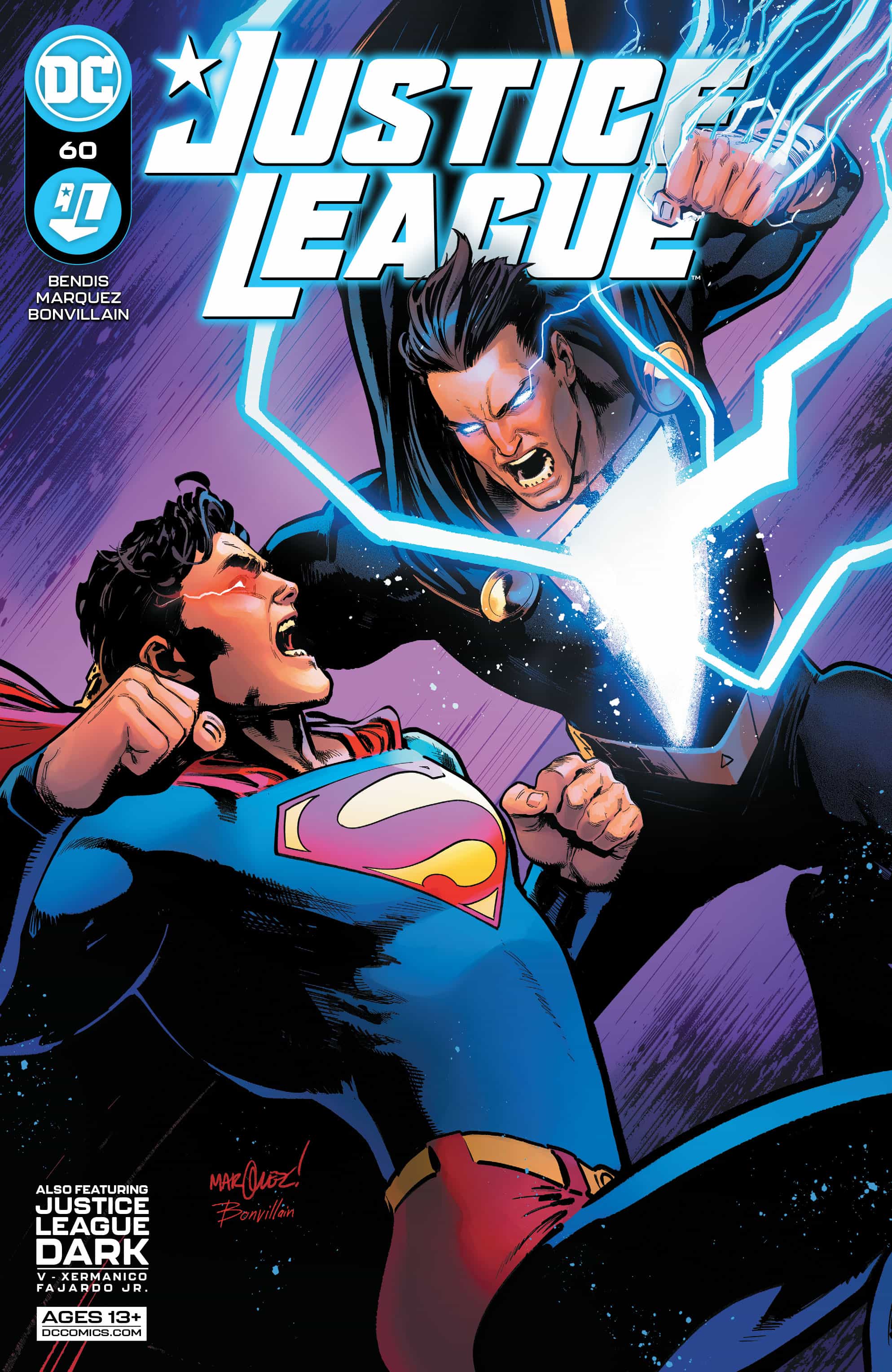 The vile new baddie BRUTUS has arrived... but what's his connection to NAOMI? And, what the heck is Black Adam doing hanging out with the Justice League? 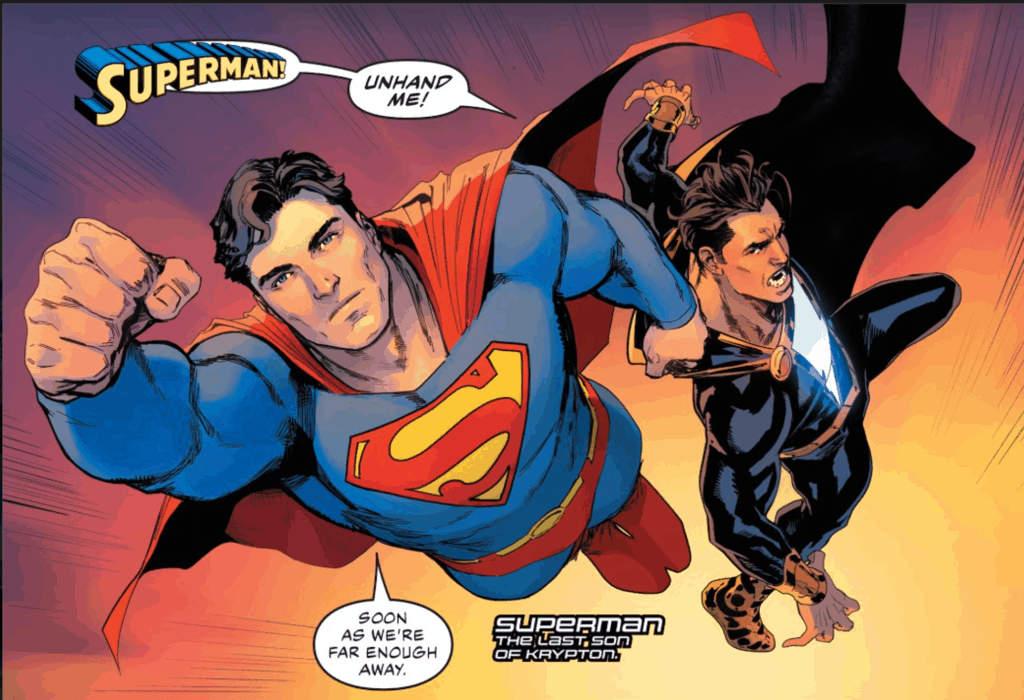 PLUS: In the backup story, Merlin's war on magic continues in the latest JUSTICE LEAGUE DARK installment!

After a good but not-quite Earth-shaking debut last month, writer Brian Michael Bendis hits his Justice League stride with issue sixty. Whereas last issue felt a bit bare bones in terms of plot, his overarching themes are much better established this issue. There’s a lot more going on than just shaking up the Justice League’s roster by adding Black Adam, there’s a deeper theme resonating in these pages of inclusion and a diversity of opinions, even if we don’t necessarily agree with them. In a lot of ways, the Superman we see in Justice League, who drives the philosophical and moral debate at the heart of he narrative here, is a direct continuation of Bendis’ run on Action Comics and the character’s eponymous title. There, Clark revealed his secret identity to the world, because he he didn’t feel like he was living up to his own code of morality by keeping secrets. The ripple effect caused by that action impacted the entirety of the DCU (not to mention paid lip service to Bendis’ historical and casual disdain for secret identities, but I digress), and those ripples now make their way to the pages of Justice League.

Clark, of course, is at the heart of the Justice League here, just as he sits at the heart of the entire DCU. What he says carries weight, and matters to the degree that anyone who disagrees with him must be a bad guy (a point humorously brought up by Green Arrow). To that end, his heartfelt – yet unpopular – ask to the rest of the team to allow Black Adam join is grudgingly accepted by all (even Batman), because of who he is. And if that sounds a bit like the ol’ logical fallacy appeal to authority – well, it could cynically be construed that way, but because Superman was so transparent in his secret identity reveal, he has some credit in the bank, so to speak, with everyone. Black Adam may not have the cleanest track record – but as Superman points out, he has always acted in superheroic defense of his nation, Kahndaq, oftentimes stopping a crisis in his part of the world long before Superman can arrive. He isn’t Brainiac, he isn’t Doomsday, he isn’t Sinestro, Clark tells us through his actions. He’s a man trying to do the right thing, and even though he has a different approach than we do, that doesn’t make him in the wrong. That doesn’t mean the entire League is immediately swayed – it’s obvious that it will take more than some convincing words for everyone to get onboard with this idea. And yet – if Superman is willing to vouch for Black Adam’s character, can the rest of the team truly be that far behind?

The other, and arguably less successful, piece of the main story is that of Naomi McDuffie. Her self-titled debut miniseries made her arguably the breakout character of 2019; now, after a brief foray into the highly-missed Young Justice, her story truly continues in Justice League. Picking up on dangling plot threads from her solo debut, Naomi is at the heart of the Brutus mystery from last issue. Who is he? What’s his deal? It turns out he is very seriously connected to her, her homeworld, and her origin story – which adds a bit more layering to his out-of-nowhere appearance last issue, which came off as random and a bit lacking in substance. The trouble is, though, it feels like a case of Bendis trying to do too much too soon. The Black Adam hook is fantastic in and of itself, and could easily carry the weight of the writer’s opening arc. Adding the Naomi angle in right from the start feels unnecessary, especially since it takes the team offworld – where the more public nuances of having Black Adam as a team member are irrelevant. And at its worst, Naomi’s inclusion so early in the going creates the appearance – intentional or not – of trying to milk her popularity for the sake of goosing Justice League‘s sales.

Fortunately, artists David Marquez and Tamra Bonvillain are on the case to boost the book’s art into the stratosphere. Marquez, a frequent collaborator of Bendis’, excels at rendering big, bold action that manages to maintain a human aspect. These aren’t glowering gods or supermodels posing on Marquez’s pages – they’re people. Their humanity shines through. My only real complaint is that occasionally he goes a little too big, and takes up too much real estate unnecessarily. There’s a splash page of Hippolyta battling Brutus that simply doesn’t have to be a splash page. Further, there’s no dialogue or narration, either, meaning that that page, beautiful though it may be, is a blink-and-you’ll miss it affair. Bonvillain continues to be a colorist extraordinaire, though, and brings sharp, vibrant colors to each page that are distinct and – at the risk of being redundant – well, colorful. That may sound silly but it’s important that each individual character not blend into one another or their backgrounds, and despite superheroes’ traditional brightly-colored garb, this can sometimes happen due to drab coloring choices. In essence, Bendis has found some top-notch artistic collaborators for his maiden Justice League voyage.

As for the backup: Listen. If I have to tell you that Ram V is one of comics’ most amazing new writers, or that Justice League Dark rules, or that Luis Jorge Borges plays significantly into the plot, or that Xermanico is a jaw-droppingly incredible artist – fine, I’ll do that. All of these things are true. Come for those things, if you must, but stick around for the most epic mic drop in history from Batman to Etrigan. Trust me: you will be saying, “DAAAAAAAYAAAAAAMN!!”.

Justice League #60 is a textbook, near-perfect example of how thematic elements can - and should - drive a story before action.

Justice League #60: What Makes a Hero?