Justice League #61: Up is Down and Black is White 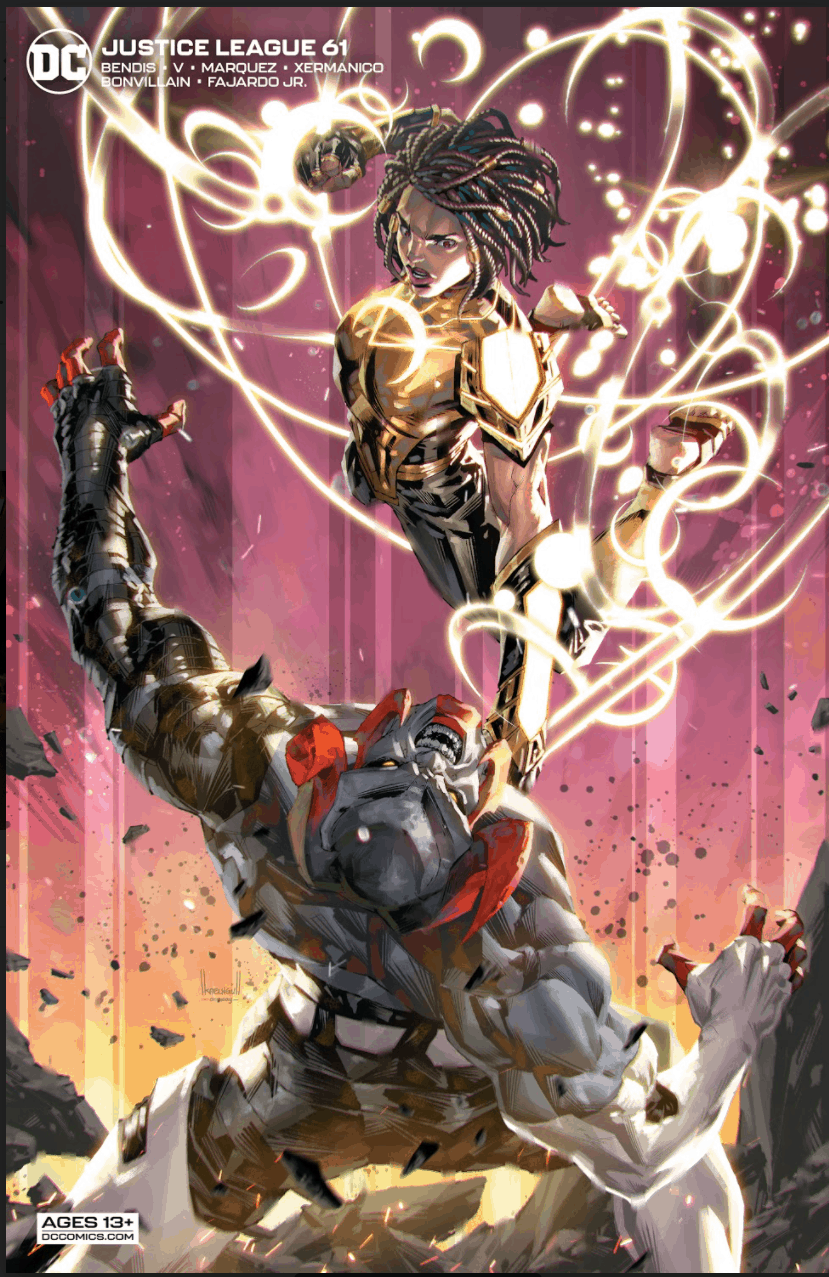 The League has travelled to Naomi's homeworld, been split up, and are now ripe targets for her war-crazed, super-powered people!

Justice League #61 doesn’t quite hit the high notes of last issue, but readers shouldn’t hold that against it. Whereas last month’s issue served as a thesis for the core themes of Bendis’ infant run on this title, this month is more action-oriented – something Bendis generally does quite well, and this issue is no exception.

David Marquez and Tamra Bonvillain bring a strong sense of scale and scope to Bendis’ script, which has the League newly-arrived on Naomi’s homeworld, separated, and more than a little off their game. The interesting twist comes from how each individual Leaguer responds biologically to this new world: Black Canary’s powers are amped up to eleven, whereas Superman’s heat vision blazes out of control. This, coupled with the unfamiliar terrain and hordes of hostiles out to kill them at every turn, creates a situation where the team – instead of arriving as heroes – are instead completely off-kilter and at the mercy of a planet full of foes.

Batman, naturally, comports himself well – even coming up with a hilariously clever solution for keeping Naomi’s mind off of her anxiety attack: invoking the ever-catchy theme song from Ducktales, which instantly lodges its earworm self in her brain and distracts her from her fears. It’s great seeing Batman used in this capacity, reminding us that no, the guy isn’t dour and grim all the time. Sometimes he’s just clever, and that’s nore than enough.

The real downside of “Prisms” so far – and this issue is no exception – is the nondescript nature of Brutus and his allies. After an inauspicious debut two issues ago, Brutus has yet to really be defined as a character other than being a stereotypical Bendis-ian casually motormouthed jerk, super strong and pretty much indistinguishable in substance from any number of other Bendis villains from over the years. He talks and the talks and he talks… but we never really get any inkling as to who this guy is or what motivates him. I know by this point that Bendis likes to humanize his villains by not giving them grandiose speech patterns (and not everyone has – or should – declare themselves to be “the tiger-force at the core of all things” like Darkseid), but so far all Brutus has done is yap. Three issues into this story, and he’s basically still a blank slate. That’s not a good look, especially when there’s so much about this story that has the potential to be truly great.

And in the Justice League Dark backup story, by Ram V and Xermanico, the team adds Ragman to its roster, and the war against Merlin escalates in a major way. V, as ever, is a craft-focused writer – no panel, page, or bit of dialogue ever goes to waste, coming together intricately and focused. Witness the Library of Babel: a library “structured as an infinite sphere of hexagonal rooms, expanding ever outward. Every word ever written and every thought that has yet to be committed to paper is found here.” And if that sounds a bit like Morpheus’ library in Sandman, well, now you know the level V is writing at. It’s all brought together by Xermanico’s insanely brilliant art, lush and detailed without getting too bogged down in its own intricacies. The characters all look sharp, and there are worlds of detail to get lost in on each page. This is a creative team that deserves far more than mere backup story duties – but we should all be glad for what we’re getting here.

Justice League #61 continues the strong themes and plot begun last issue, but stumbles a bit with nondescript villains whose motives aren't spelled out clearly. But the JLD backup story is a thing of absolute beauty - this comic's purchase could easily be justified by these ten pages alone!

Justice League #61: Up is Down and Black is White