Justice League #63: …But What About the Trial of Naomi…? 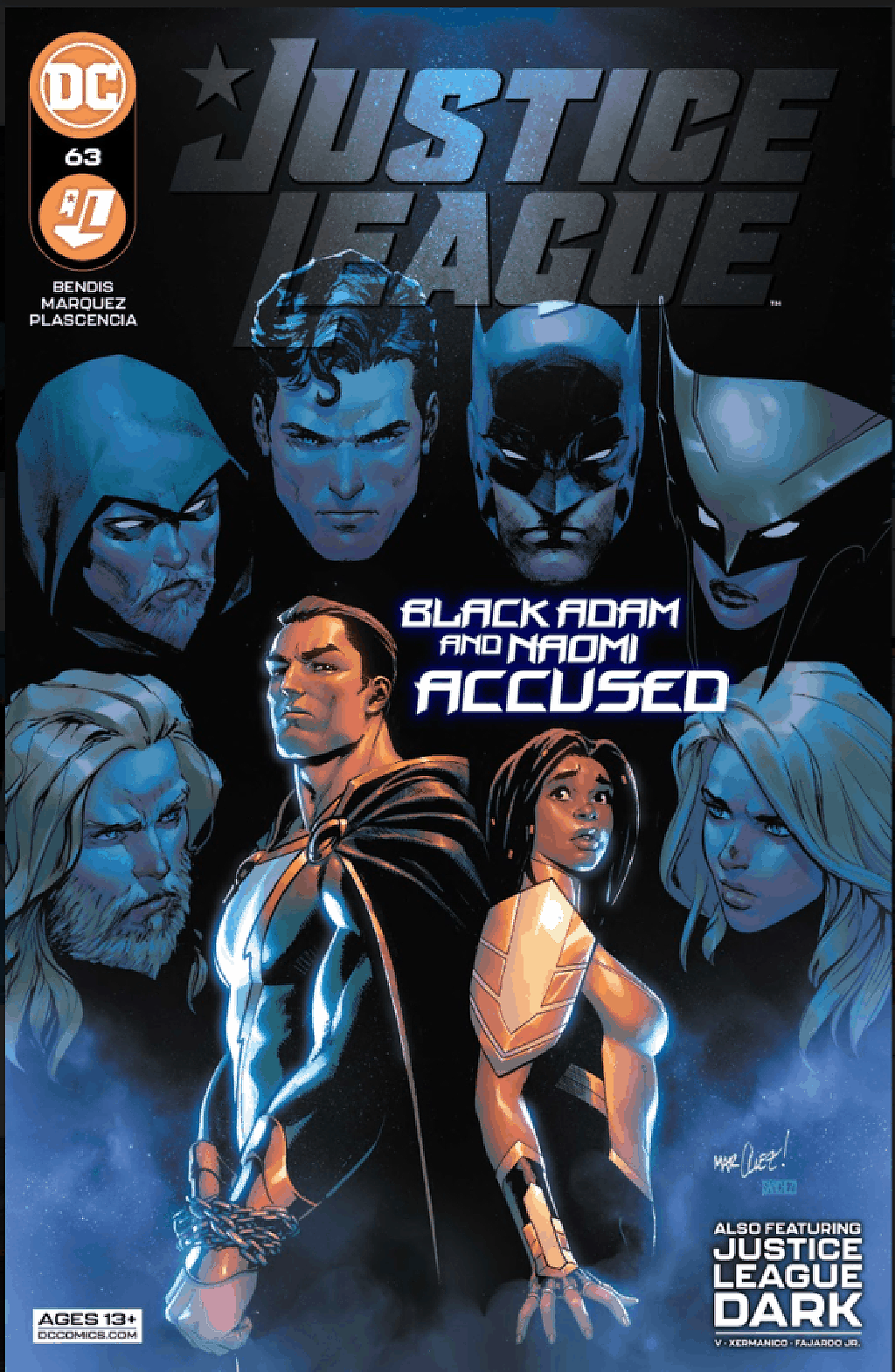 The Justice League traveled to Naomi's home world in a preemptive strike to stop Brutus from attacking earth. Flash messed up the dimensional transfer leaving the League broken on a foreign world.  In Justice League Dark, the League is chasing Merlin constantly one step behind.

When I read the solicitation, I thought I had read the wrong issue of Justice League. Where’s the trial of Naomi? What other Leaguers showed up to give advice? There is a strange and long speech about saving the multiverse. Did the cows have fallout from Black Adam joining the League because no one else knows yet?

This issue was the last of this arc, and I’m glad we’re moving to something new. I’ve enjoyed Bendis’ work on other comics, but this arc sounded better in the advertising text. After a few days of contemplation, I think it boils down to too many characters. If this had been a story about just Naomi, Black Adam and Queen Hippolyta, there would have been enough time to devote to character development and plot. Instead we have an issue with a few really good scenes and a bunch of repetitive and oddly placed dialogue.

The Justice League Dark backup is really good, though. We get more fun things with books, the introduction of a new character, a fight with zealots, and the Tower of Fate.

In the Justice League story, we have a lot of future plotlines being seeded. This may be the only good thing that this story accomplishes. What’s going to happen to Brutus? Will Zumbado return to Earth? What happened between Black Adam and Queen Hippolyta that they don’t get along.

For Justice League Dark, after a quick wrap-up in the Library of Babel, we have some excellent scenes in the Tower of Fate and in Gotham City. Some potential new team members get some screen time.

The only strong theme this issue is ‘being a teen super hero’ or losing control on the battle field. It should have been a “with great power comes great responsibility” or “welcome to the team hope you survive” moment, but it fell short.

As part three of three, we’re starting to see each character develop a unique voice.  Naomi is obviously the new kid.  Flash the science guy. Aquaman, the outsider.  Although the characters should come across stronger, character development gets weaker when we come to Superman, Black Adam and Hawkgirl. In fact, Hawkgirl’s dialogue is so weak, it is interchangeable with any other character.

Here’s where Justice League #63 really shines.  Marquez is spectacular.  In addition to the great battle scenes, this story gives us small personal scenes that also look great.  Not to be outdone, Xermanico is equally good in the Justice League Dark backup. Visually, this may be one of DC best books.

Both Marquez and Xermanico are using the comics medium to full effect: full page action, round panels, lightning borders. Wow.

There’s some fun moments of world building in Justice League #63.  Batman and Green Arrow discussing League funding provides nice insight into each character.  Black Canary and Naomi have a good heart-to-heart chat about the reality of the super hero life.

Naomi, Green Arrow and Black Canary fans will enjoy this issue.  Fans of Justice League Dark will not be disappointed.

Superman and Black Adam look exactly the same. I should be able to tell which character I’m looking at without the super suit to inform me.

Unless you are a Naomi fan, buy this issue for the Justice League Dark story only. Next issue we start a new arc in the regular League story, and it can't come soon enough.