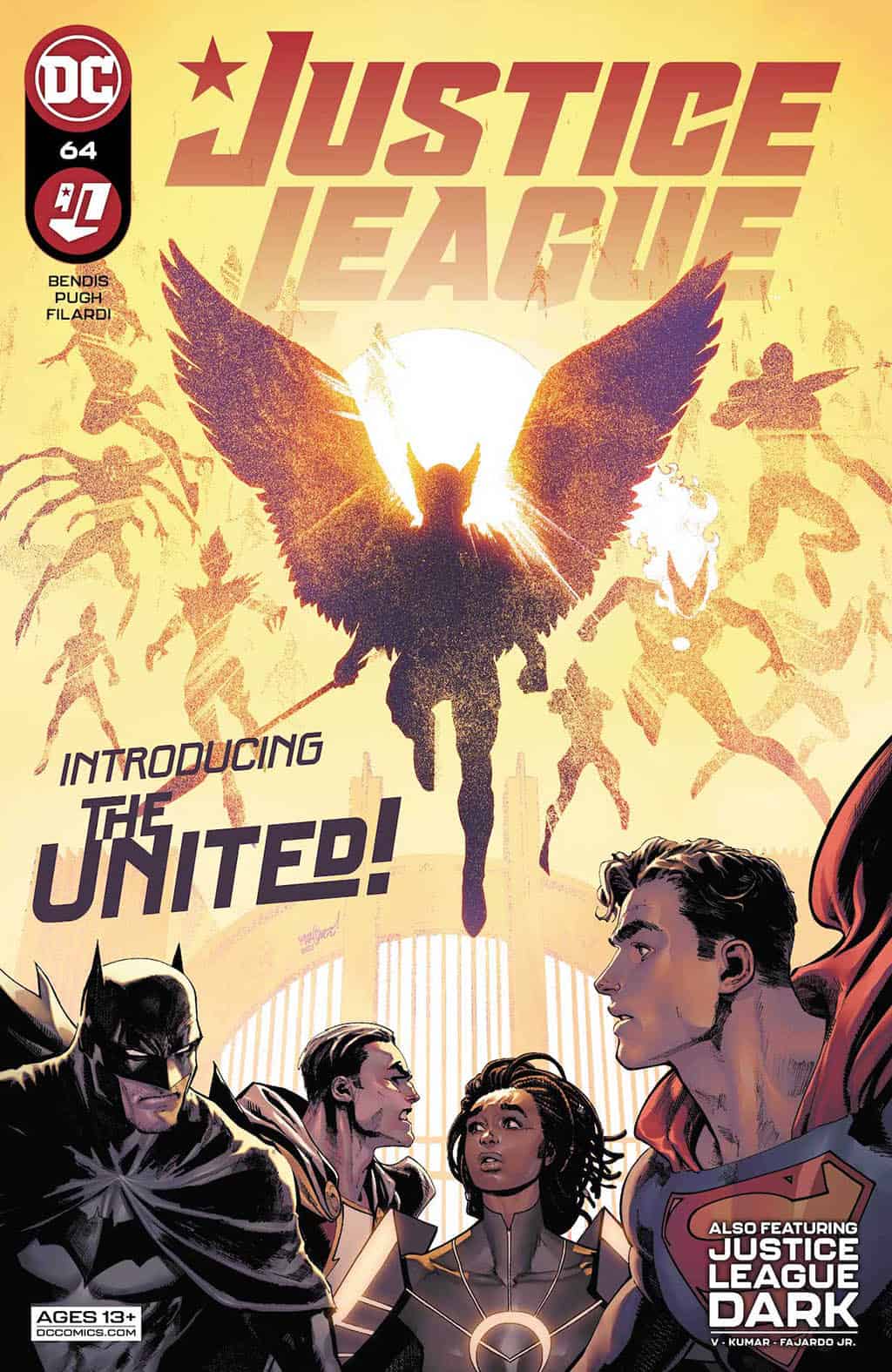 Where the last three issues of Justice League have mostly been a miss for me, this issue gets things right. Our main story is a continuation of the Synmar Utopica story from Superman’s own comic. If you don’t remember Synmar, the first pages provide a little backstory and introduce us to both Synmar and the United Order — a collection of alien super heroes. If you’re a fan of any DC Comic space stories, you’ll recognize the species of most United Order members. Back on Earth, after a little Naomi combat training, the League gets a dire warning that Synmar is coming. The warning comes too late.

Our secondary story this month is a connection to the new Checkmate comic. Oliver and Dinah get some alone time until they are rudely interrupted. They really are a dynamic duo, and it’s good to see them working together. It looks like Dinah’s power upgrade from last issue stuck around. Plus Green Arrow uses some trick arrows. It’s good fun.

The dialogue both moved the plotlines forward and gave us a feel for who the characters are. From Teth-Adam’s compliments and disbelief to Naomi’s “I’m the new girl”, the dialogue enhanced the entire story.

We have a new artist, Steve Pugh, this issue, and he doesn’t disappoint. We have strong facial expressions, unique character designs, and good action sequences. The colors by Nick Filardi in the Dinah and Oliver scenes added a subtle hint at the time of day and the location of the characters. It’s a great use of color.

The panel work is unique with many overlapping boxes. It still follows the standard panel layout you’d expect from comics but with a slight twist.

If you were given Superman level powers, would you use them for good or evil. Synmar Utopica is an evil shade of Superman and a good cosmic level problem for the entire Justice League to encounter.

There’s a lot of world building this issue with the introduction of the United Planets and the United Order. We have space ships, alien worlds (Daxam), and Coast City, Earth.

Fans of cosmic threats, DC space aliens, and the worlds beyond Earth will like Justice League #64. If you’ve been following Naomi’s rise as a fan favorite, we get more of this great new character.

We also get cameos from the Wonder Twins, Kelex, and Naomi’s parents. It’s these little touches of connected characters that bring the larger world of the Justice League to life on the page.

To add another level of enjoyment to this issue, check out these back issues. 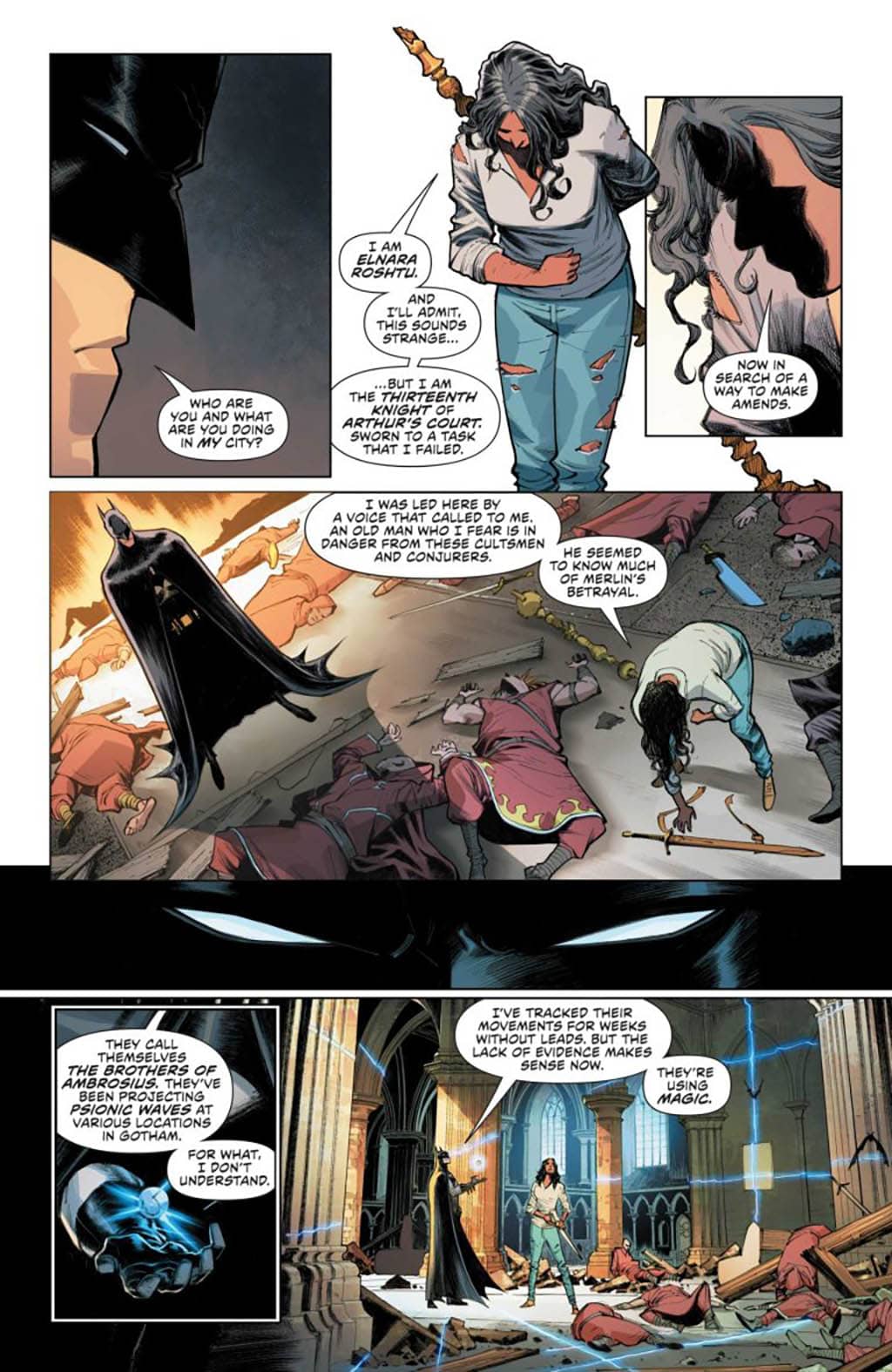 Over the last few issues, the Justice League Dark has been tracking Merlin. After spending some time in the Library of Babel, the team has returned to the Hall of Justice with a few new members.

We start a new arc this issue, the Eternal Knight Part 1. It begins with action and keeps things moving throughout the pages as our Dark Knight encounters an unfamiliar face while tracking The Brothers of Ambrosius. The new Thirteenth Knight, Elnara, shows off her moves as she and Batman hunt for a mysterious ghost voice that’s been haunting her. We’re still dealing with Zatanna’s power problems. Either Ragman knows more than he says or he accidentally trips over the truth.

I didn’t think the art could be better, but it was. Sumit Kumar brought the magic this issue. Dynamic action. Good pacing. Sumit’s facial expressions are a particular delight giving us a touch of insight into the character’s thoughts. Romulo Fajardo Jr. uses color expertly. The flashback scenes and transitional scenes are colored differently than the Batman/Elnara scenes making it really easy to tell where you are in the story. The cliffhanger full page art is chilling. The panel work on Justice League Dark is superb. There’s a fight scene between Batman, Elnara, and the Brothers where we have full page art coupled with uneven panels. The juxtaposition of the panels brings a nice visual effect to the chaos of a Batman fight.

Time displaced characters are always funny. Elnara is no exception as she interacts with Batman who might be a wizard, cleric, or another knight to her ancient eyes.

“Who is your armorer? Very fine quality work, if I may say so,” Elnara Roshtu

If you are a Batman fan, there’s a lot to enjoy in Justice League Dark: The Eternal Knight Part 1. Ragman fans will like Rory’s appearance.

If you need some background on the Justice League Dark cast, check out these previous issues for more.

Justice League #64 is a good starting point for anyone looking to get into the book. It's got something for everyone. I especially liked the Cover B by Jason Howard (@theJasonHoward) with our warriors -- Hawkgirl, Aquaman and Hippolyta -- looking mighty. Batman's involvement in Justice League Dark was a really nice restart to the ongoing Merlin story. I could have read an entire issue devoted to Justice League Dark.